July 05, 2017
Vectors and chapter 10.8 of the OpenStax Algebra and Trigonometry text would land on the same day as the planetary distances exercise in physical science. This meant juggling gear for the back-to-back one and half classes. 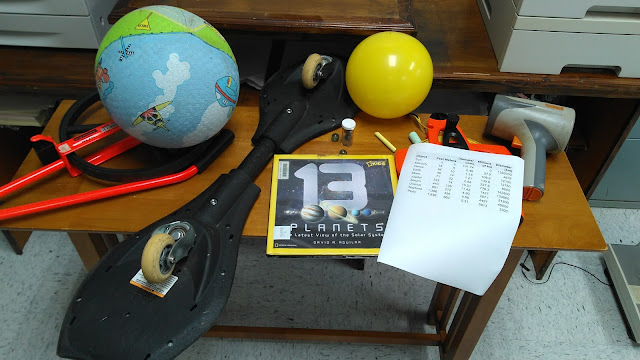 A surveyor's wheel, the "sun" ball, BBs, a variety of marbles, along with 13 Planets and planetary distances were all for physical science. The RipStik, tape measure, radar gun, four square ball, chalk, and stopwatch (not shown) were for the vector exercise in algebra and trigonometry. 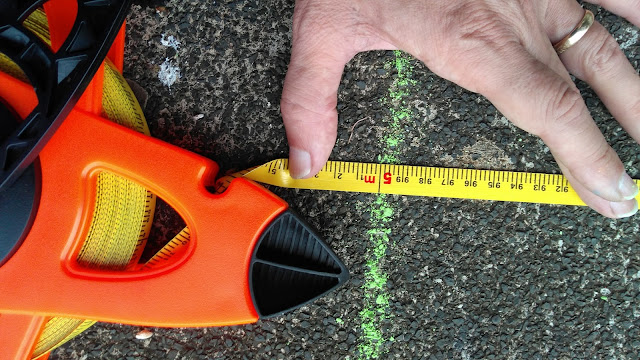 In algebra and trigonometry I opted to use a 500 cm run for the RipStik. 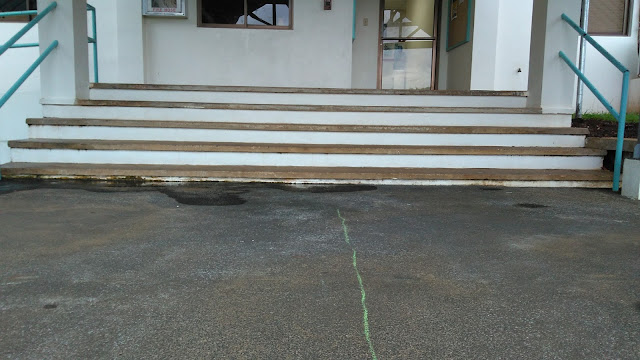 Due to rain, I fired the four square ball perpendicular to my rolling path towards the building. The covered walkway provided shelter from the rain. 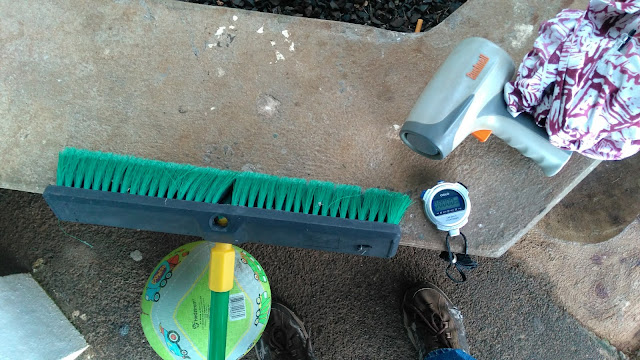 More equipment deployed in the vector exercise, the broom was used to sweep rocks from my rolling path. 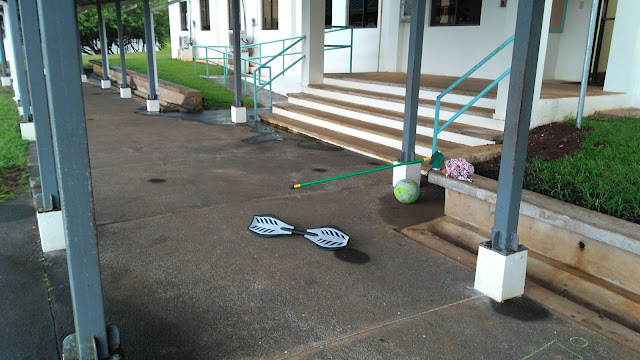 A look at the layout of the experiment. 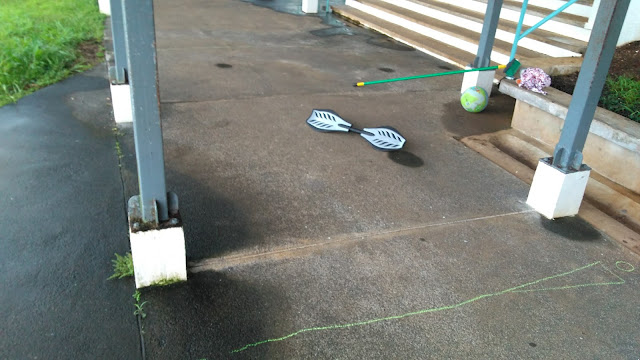 The 500 cm start point. The ball would be released at the second line. 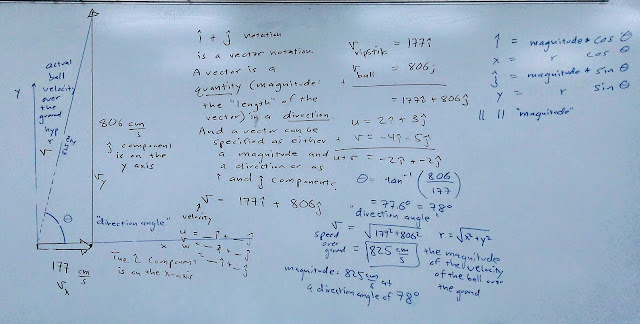 The RipStik covered 500 cm in 2.83 seconds, while the radar gun reported a ball velocity of 29 kilometers per hour. The radar gun was situated to take the speed of the ball perpendicular to my run, rather than at an angle which might have yielded the overall magnitude of the ball velocity (the hypotenuse). There is a possibility that the release point and gun were not perfectly perpendicular, but in the spirit of producing the i and j components I treated the 29 kph as a perpendicular velocity. 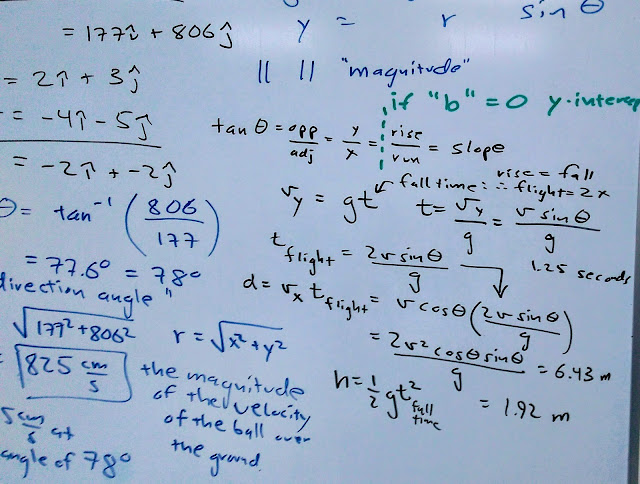 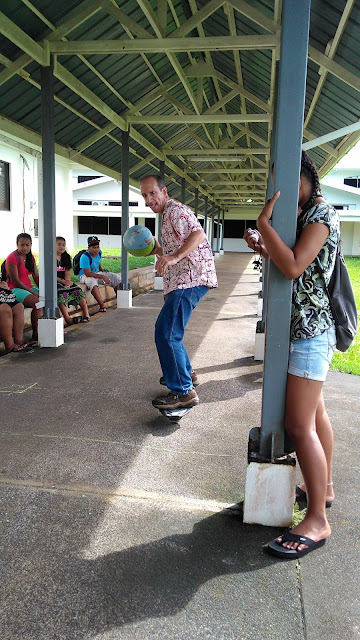 Inbound to throw the ball in the afternoon. 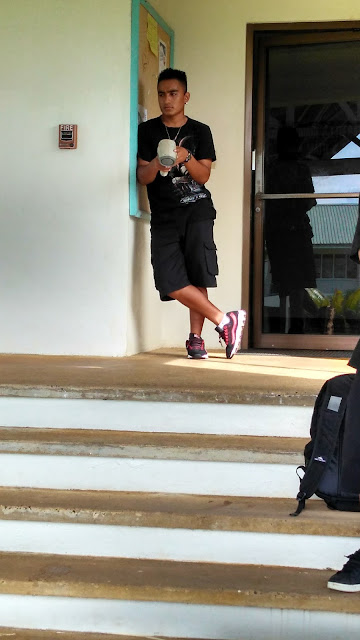 The radar gun operator was just right of the target area. I again threw to the "inside" as this was actually easier. 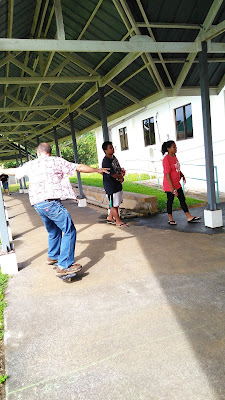 On the recovery roll out. My board speed improved with practice. 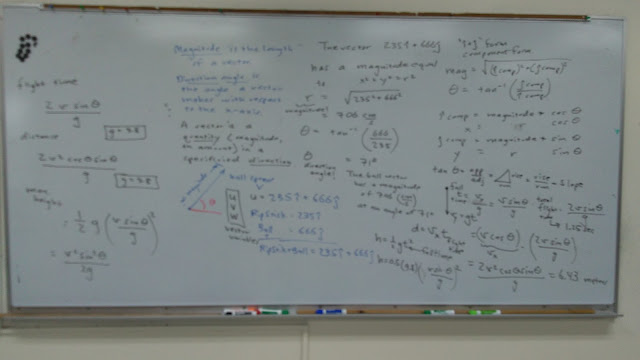 Note that Monday I had run a projectile motion demonstration on the lawn, capturing the launch angle and inbound speed of the ball. Although I generated velocity components, I did not introduce i and j notation at that time. The calculations can be seen, blurrily, in the image above.

The week would end with the dragging of a paper box on Thursday using yarn and a blue spring scale to produce dot and cross product values.