July 25, 2017
Tuesday began with constructions demonstrated on the board. So much of geometry was originally built on constructions and then proving relationships in those constructions. Yet modern texts tend to give short shrift to constructions. The following diagrams were done using Desmos/Geometry.

A point was introduced with a brief overview of the issue of whether a point is truly zero-dimensional or has a finite but infinitesimal size that is non-zero. This was then set aside to note that the first two-dimensional shape is the circle: all of the points a constant distance from a single point. In some sense the circle precedes the line in simplicity, and the circumference of a circle is one-dimensional. 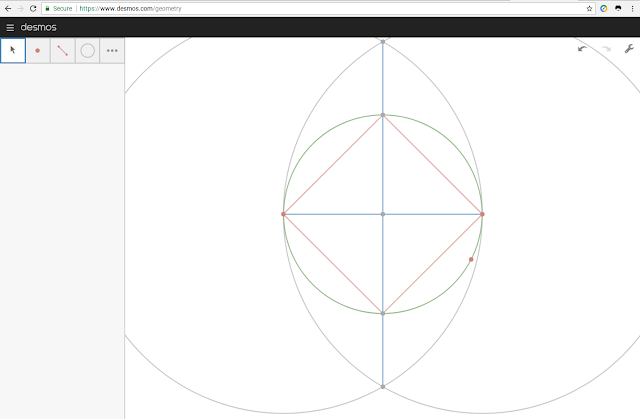 Although the first polygon is arguably the equilateral triangle, which follows from the construction of the hexagon, a square was presented next as this illustrates the construction of a perpendicular bisector to a line. The square is rotated by 45° from the usual upright orientation. 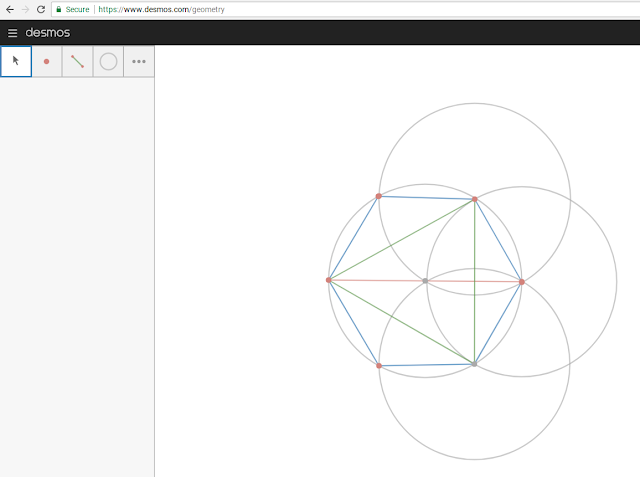 The the construction of a hexagon was made, immediately followed by noting the presence of equilateral triangles in the hexagon. Standard 2 in Geometry is Geometry, measurement, and transformation. Under standard two benchmark three is to Use the relationships among properties of circles (chords, secants, tangents, arcs, circumference, radius, diameter, inscribed polygons) to solve problems.  Student Learning Outcome "a" under this benchmark is to Use properties of circles to find the length of the chords of an inscribed regular hexagon. This seems odd as the length of the chord of a hexagon inscribed in a circle is the radius. These are equal. There is no calculation to be made. The length of the chord of an inscribed square or equilateral triangle requires some calculation, but not the hexagon. Why was the outcome limited to the one trivial shape? 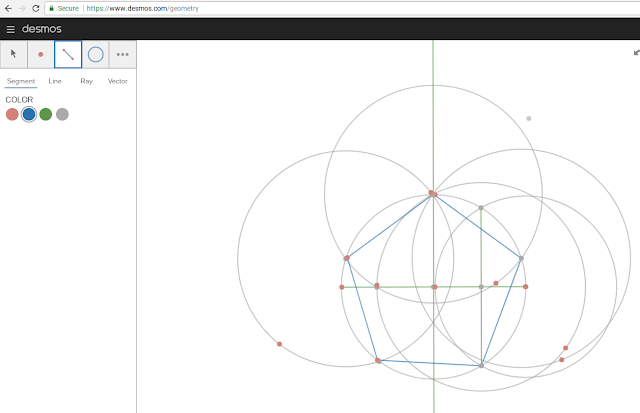 
A pentagon can be inscribed in a circle, although this is a tad more complex. Directions for constructing the pentagon are available in online notes.

In the afternoon vectors were covered among other odds and ends of topics. Much of the discussion in the afternoon centered on the standards not being aligned to the geometry text in broader use in the schools. The state standards were written with a forward looking lean in 2012. Yet only a single instructor at PICS has access to the newer 2014 common core standards geometry text that is functionally somewhat aligned to the standards. The 2006 text that all other geometry classes are using does not align to the standards. Those who wrote the standards might have expected that instructors would build their own curriculum to bridge the many gaps. This seems to be a perennial hope in education, and certainly goes back to the 1980s if not the 1920s or perhaps back to Euclid's first text in 300 A.D.

Whether curriculum designers want to accept the reality that teachers follow texts, or to not accept, is rather moot. The reality is that teachers ultimately follow texts. This is not a "bad thing" although any workshop designing standards must think this is bad as every workshop I have been exhorts the writers to write the standards without reference to the text in use. The standards should be written to serve the knowledge needs of the students and community. Or so goes the guidance given to many curriculum writers.

The reality that goes unaccepted is that secondary school teachers have heavy loads in terms of the numbers of students, the numbers of sections, and the sheer amount of class prep and marking work that needs to be done. And the textbook was not written by dolts. Intelligent curriculum designers worked on the textbook sequencing topics and laying out homework assignments to support learning. Add to that the task of building curriculum for standards that are, in the case of the 2006 geometry book in broad use in the high schools, not aligned to the textbook means a huge amount of material has to be created. Not just a few patches here and there. The 2006 textbook does not support the standards. The 2014 text is closer, is better, but there are alignment issues even for this newer text.

The created material would have to include explanations, notes, homework, review problems, and all be designed in a way that supported learning. And each instructor would either need to do this, or somehow, in their non-existent spare time, the instructors would have to team up to build what would be a whole text from scratch.

Adding to the challenge is that the standards are not in any sort of learning sequential order. The first two outcomes of the first standard deal with vectors - a topic that has to follow introduction of the trigonometric functions. This means that teachers would have to sequence the standards and then write, whole cloth, a book to support this sequence. In the newer 2014 text one might be able to hop, skip, and jump around to remain close to the standards, but the 2006 book is too misaligned with the standards to even do this. For example, vectors are simply not supported in any meaningful way in the 2006 book.

The teachers favor redesigning the standards around the textbook, something that is always abhorrent to curriculum designers. I am not sure what the source of that horror might be. I think there is a middle ground where one writes standards with the textbook open and consulted. Designers might say, "But what if the textbook is changed? Or changes?" Yes, textbooks might change, and do. And perhaps that might be a cue to update the standards. But the reality is that the basic sequence of topics today is the same as when I took these courses 43 years ago. And based on what I learned back then looking at earlier textbooks, these sequences went back into the earliest parts of the twentieth century. Texts change, but the changes are evolutionary not revolutionary. The 2006 Algebra I text spent a whole chapter on factoring. The 2014 text reduces that material to a single section. Factoring did not go away, only trimmed to a more reasonable amount of material. 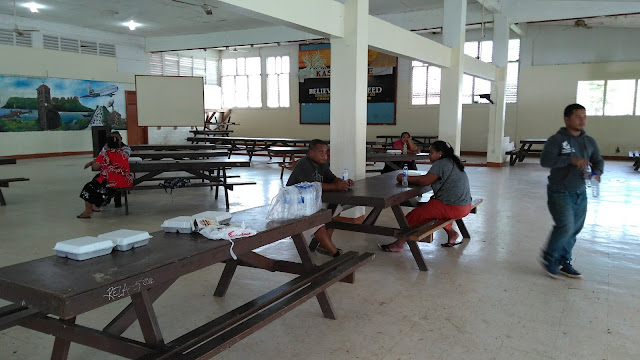 End of lunch in the dining hall

One other perspective on this. The high schools are turning out students that are far stronger mathematically than they were twenty years, stronger than even ten years ago. Math performances from the college placement test provide support for the assertion that the public high schools in Pohnpei are well preparing students. NMHS A1 and MHS A were ranked number one and two in the nation on the COMET placement test. One could argue that whatever the math teachers are doing, the results are excellent. This is not a broken thing that needs to be fixed, the high school math programs are a very functional part of the education system here in Pohnpei. Whatever the teachers are doing, it is working, and students are learning and performing excellently.

This summer I had a class that was predominantly new freshmen students, students who had graduated high school a day or two before the class began. The class was MS 101 Algebra and Trigonometry, the highest math class offered at the college at this time. The new freshmen performed superbly, and were clearly ready for college level algebra and trigonometry.

If this is the result of following the textbook, then keep on following those textbooks. Yes, there are places where reasonable decisions could be made to compress some material with stronger students - the early chapters of the 2006 Algebra I text are a good example where stronger students could move more quickly through this material. The 2006 Geometry text does not look as amenable to compression, and that may be problematic. Were the teachers to move into the 2014 common core standards text, there would likely need to be further content support to handle material in chapter two of the 2014 text that is treated more briefly in the 2006 text and only in chapter 15. No teacher actually gets to chapter 15 at present, there is just too much material to get that far.

The day wrapped with an ongoing discussion of trying to fit a square peg in a round hole - the present texts into the standards or vice-versa.