July 10, 2017
Laboratory 14 remains a laboratory in search of a more mathematically interesting model. Past attempts have looked at speed versus distance for a flying disk. The intent is to study a system with an unknown mathematical model.  The massive complication is launch angle. Launch angle changes everything. 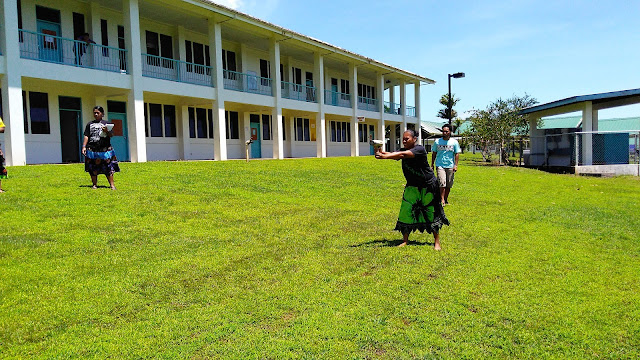 This term I decided to see if measuring time might iron out another known kink beyond the launch angle kink - the curved flight path. Some throws curve, but the measured distance is straight line. Perhaps time aloft would better reflect the launch velocity. 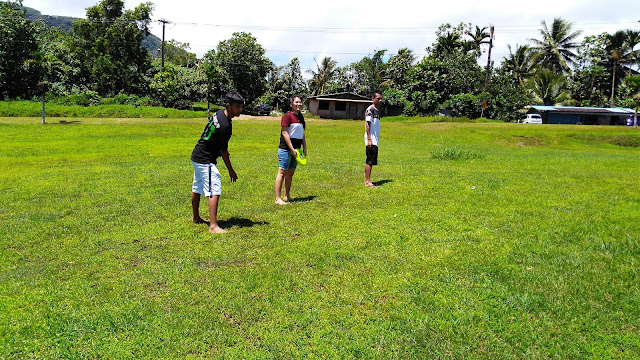 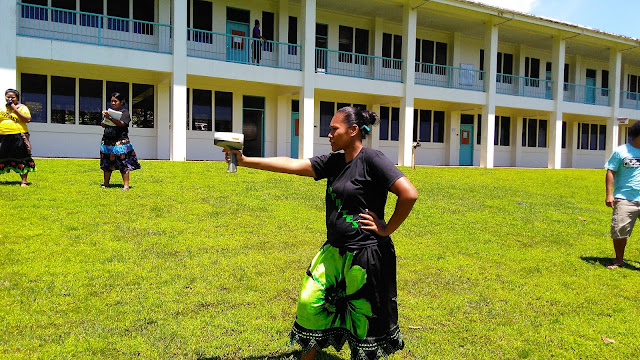 Herlinda accomplished the radar work both fearlessly and with style

I usually handle the radar gun because the throwers are told to fire the flying disk directly at the radar gun, and thus at me. I never ask a student to take on this task. 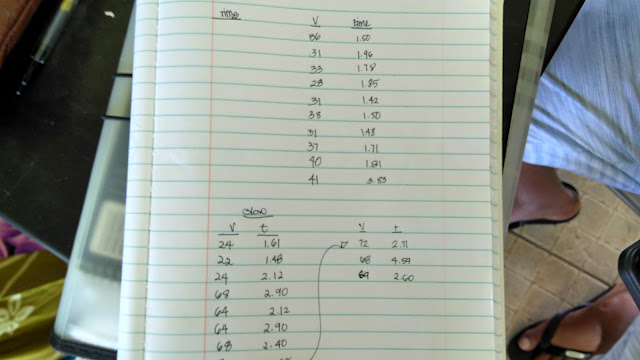 The results were even more chaotic than distance data usually generates. 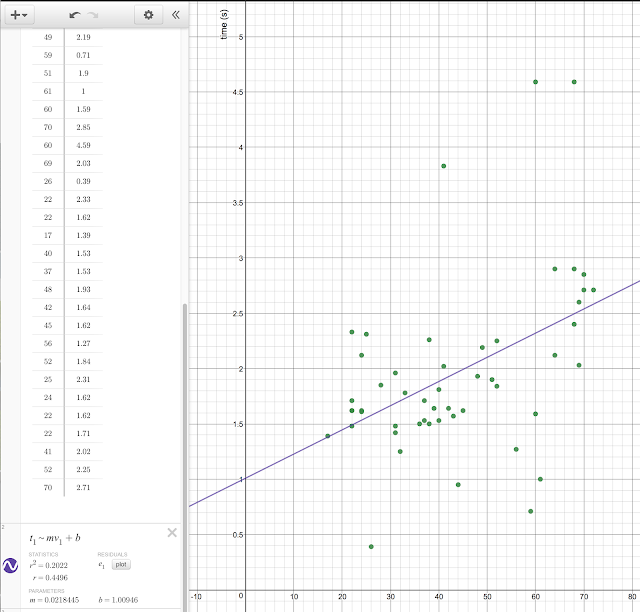 The failure to produce even a decent linear relationship was not lost on me. Laboratory 14 achieves the subgoal of being a fun exploration, but the end game is not some mathematical nugget. Worse, watching 14 I am more and more convinced that flat throws are simply too hard to achieve, especially on long, hard throws. The angle will simply have to be accounted for. Then one is potentially looking at something that would have to be compared against the free falling body distance formula of :
d = 2v² cosθ sinθ /g

Quite frankly the speed versus distance data was better, in part because 0,0 made sense: a zero launch speed means zero horizontal distance covered. The time data produced a significant, and, relatively speaking, a large y-intercept. I could not argue for 0.0 because a zero launch speed has a non-zero fall time.

Post-script: I now know what I would like to run in a future run of this lab: the distance versus v cos θ to force consideration of only the horizontal velocity component. Sure, this is an additional math bridge, but with an introduction to the concept I can again use science to introduce a math concept. Each thrower will need a meter stick holding partner to track launch angle and a protractor equipped angle reader. Plus a distance tracker and a recorder is four to five per group.

I am still myself trying to comprehend the meaning of the slope which was seconds per kilometer per hour. Which is a mess, and I knew that, but the goal was to chase whether there is a mathematical relationship and if there is, the nature of the relationship. The units were those of convenience based on the gear available.

I guess one might try to convert the kph values to meters per second, but then the units will be seconds per meters per second which is equivalent to seconds² per meter. Which makes less sense. One could reverse the data columns and, using m/s on the y-axis, get m/s per second. And those would be the units of acceleration, although clearly we are not measuring an acceleration.

If the launch angle is measured then we can use v cos θ versus distance which should mimic a known equation in physics for projectile motion that d = v cos θ × t. The catch is that equation presumes v is effectively constant and we had a variable v. Perhaps I have to measure time, distance, and velocity and use d=k×v₀ cos θ × t. For a ball k should be 1, for flying disks and rings k should be greater than one. 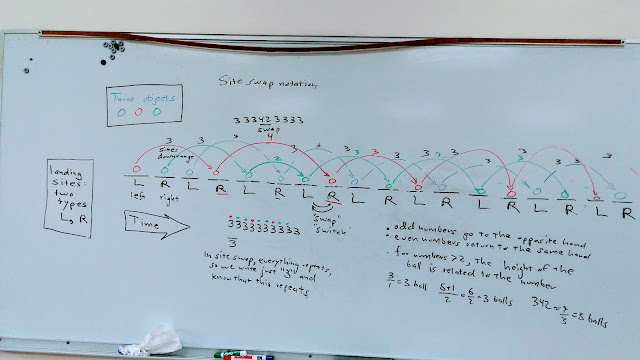 I setup the site swap laboratory with less obfuscation than in the past. Labeling was straightforward and direct. The balls were hidden. I used the usual approach of completing the site diagram for a 33333... site swap. Then I asked students if they understood, including individual call outs. Many responded by nodding their heads in agreement. I would then double check with a re-ask of the question - so you do understand this? A couple students were brave enough to venture that they were either confused or not sure they understood. I then suggested that no one actually understood what I had written, and this was all right. What was on the board could not possible make meaningful sense.

I used this as a science methods teachable moment to address the teacher education program students. Students, at least here, will often respond to "Do you understand?" with "Yes" regardless of whether they understand or not. Asking specific questions of specific students may be a useful alternative elsewhere to probe for actual understanding, but here that would risk embarrassing the student. Education in the home here does not involve checks for understanding but rather the expectation of see and then flawlessly reproduce a specific skill. Demonstrate and then faithfully copy. 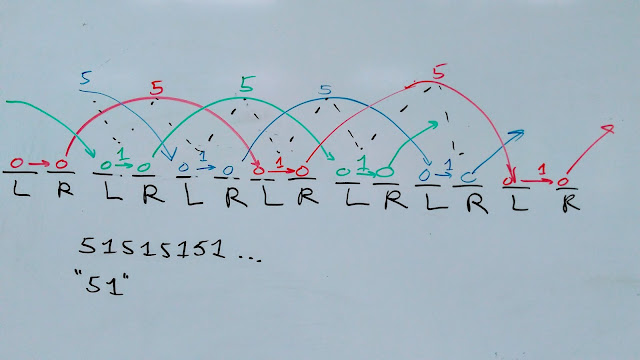 Then I did a demonstration with the balls, continuing to show a 51 pattern, and then swinging back over to the 3 and showing 42 swap. As I went, I demonstrated. Without the physical system for reference, the math makes no sense.

We wrapped with the class attempting to juggle a 3 or 51 pattern. What might surprise a visitor to the class is that many of the students learn to juggle from the get go there in class, with little more instruction than the demonstration. Over the years I have come to understand that the students watch and then, for the most part, faithfully replicate my action. Some students do bring precursor skills, but some simply learn from scratch. And rather than the usual one ball, two ball, three ball recommended learning sequence, some simply start from three and mimic my motions successfully. The first attempt might be a flash (a single three throw set), but by period end they have gone beyond the flash. 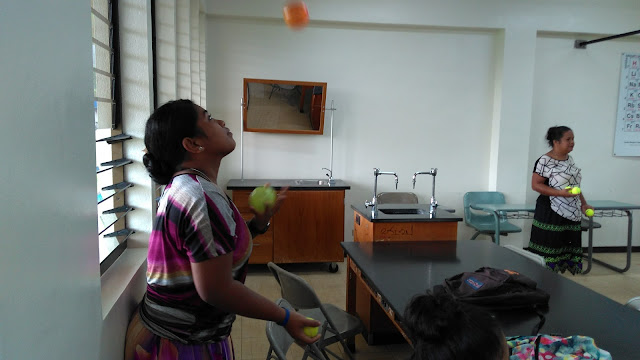 Genrisa, Ronda on the right 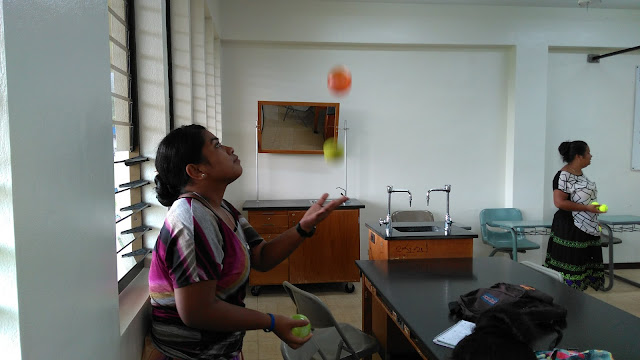 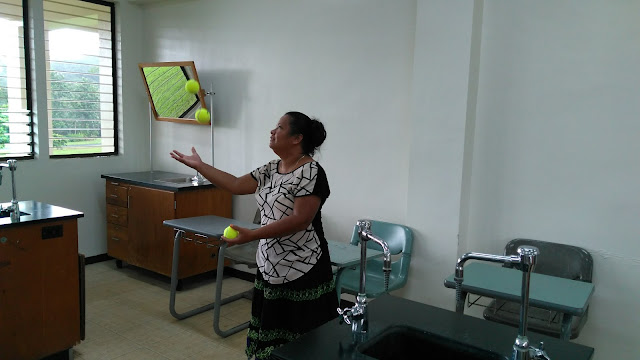 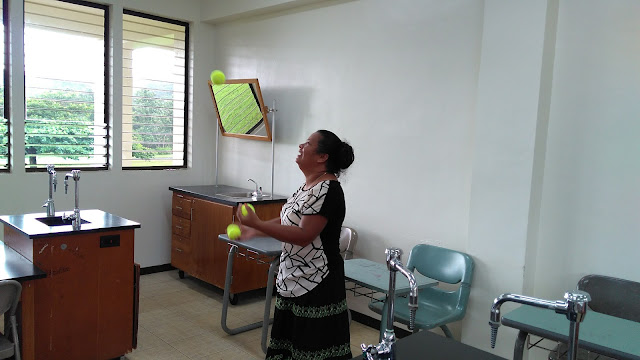 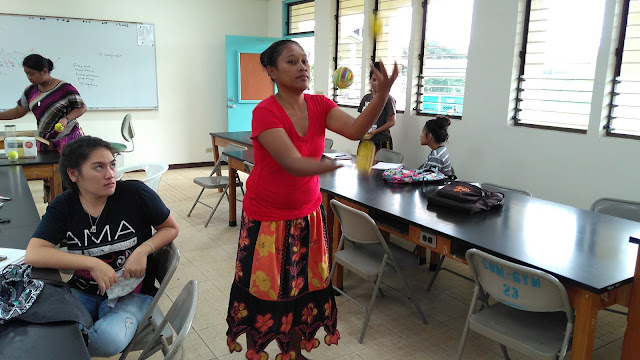 Herlinda with a rubber band ball and two smiley face balls, a tough combination due to weight and size differences 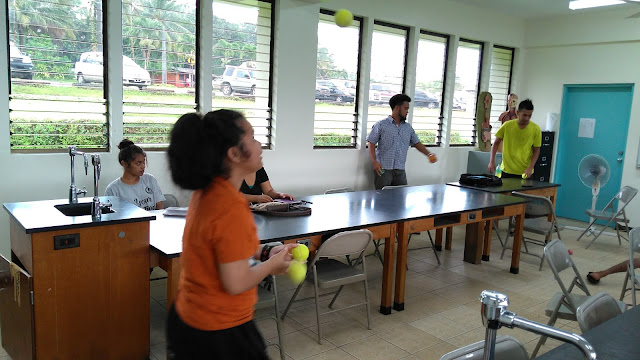 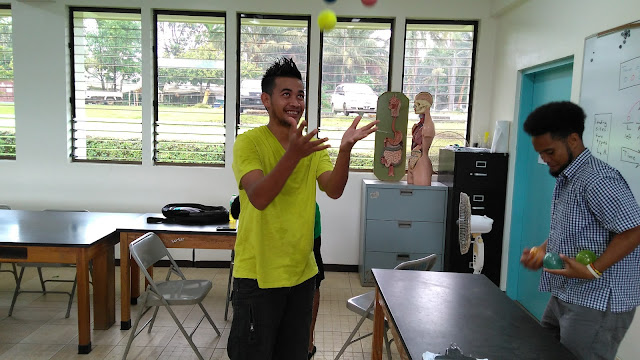