June 09, 2017
Summer 2017 launched as a two course summer and then ramped up to three courses plus the laboratory section. This summer the A204 laboratory was free at 12:30 which means the class can gather data and then go to the computer lab to write up their reports, share findings. This appears to be ideal for the class, better than having 11:00 to 12:30 free, and far better than 9:30 to 11:00 free. This should be planned for in the future.

The first laboratory explored the density of soap. This was really the first term during which Desmos was used from the get go, where no mention of spreadsheet options was made. 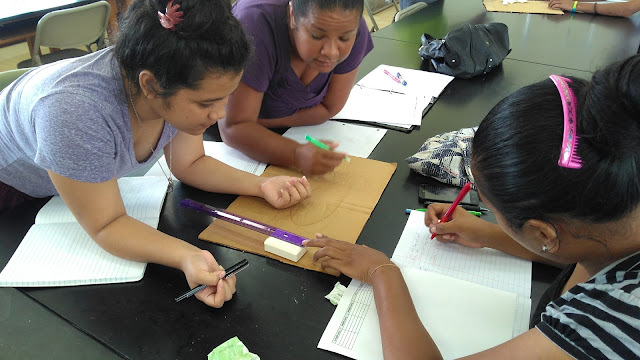 While students had copies of the table from the text, few students chose to use the pre-printed tables. Being a summer term, I also suggested that the students carry the text on their smartphones rather than acquiring a hard copy. 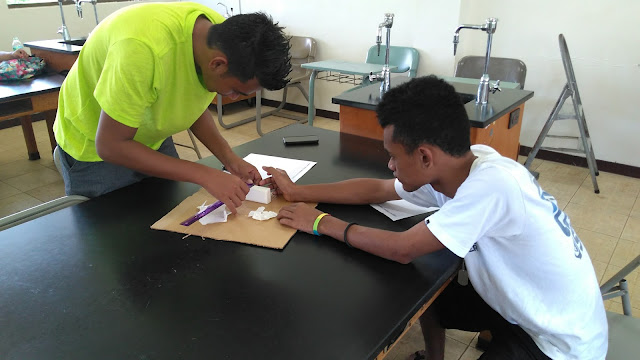 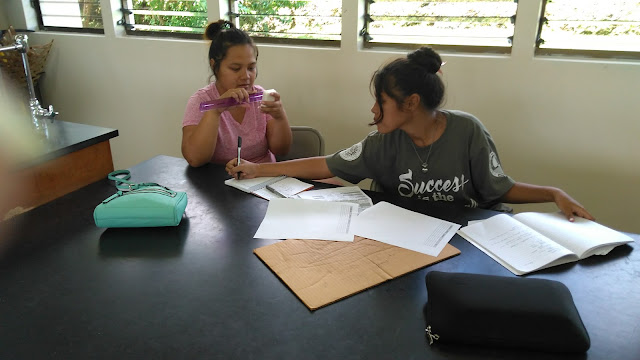 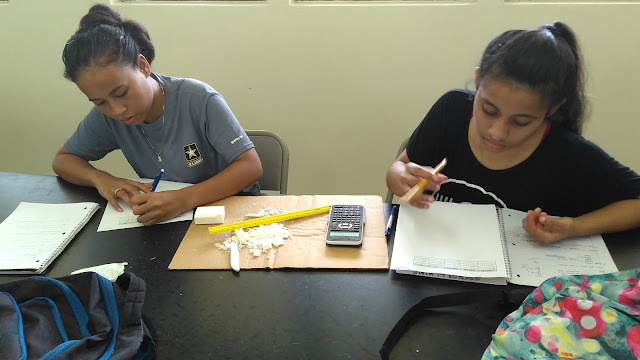 Scientific calculators were present the first week, but by second week many students were relying solely on Desmos on their smartphones. 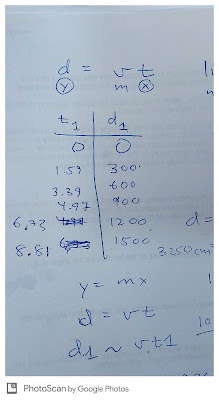 The morning of laboratory two a RipStik constant speed run was made. Data was preliminary recorded on paper and then, while still sitting outside along the sidewalk, the data was plotted in Desmos by those who had smartphones. 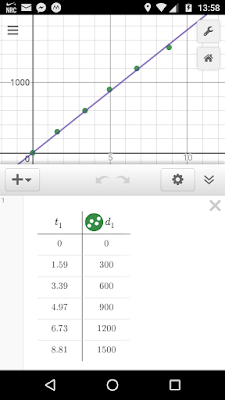 Following data entry, Desmos was used to determine the velocity v, which was 179 cm/s this term. 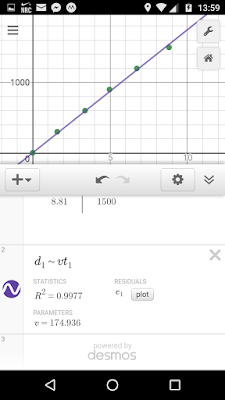 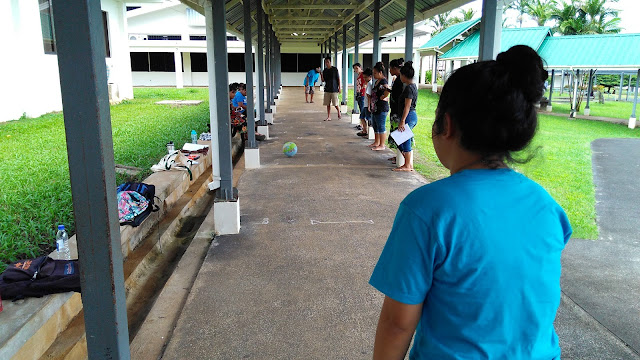 Laboratory two, the velocity of a ball moving at constant velocity, followed the current design of timing the ball across fixed distances. 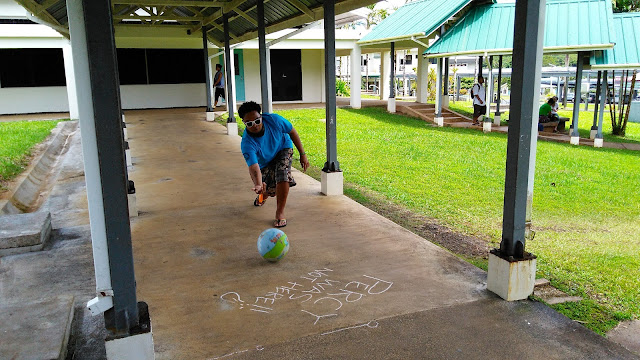 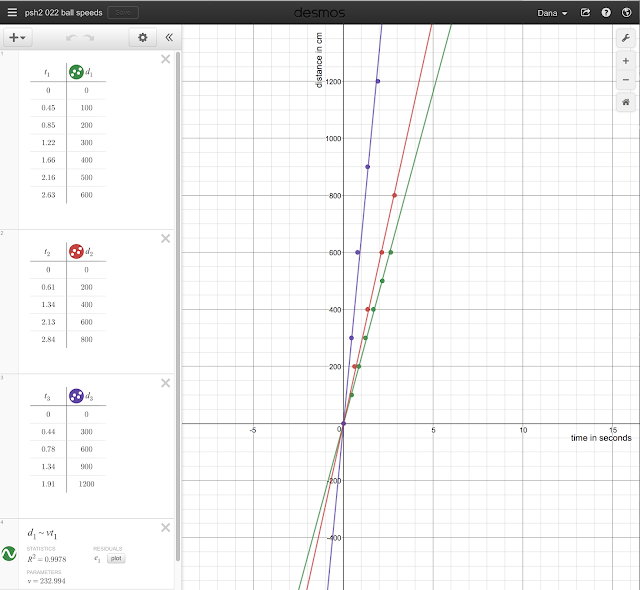 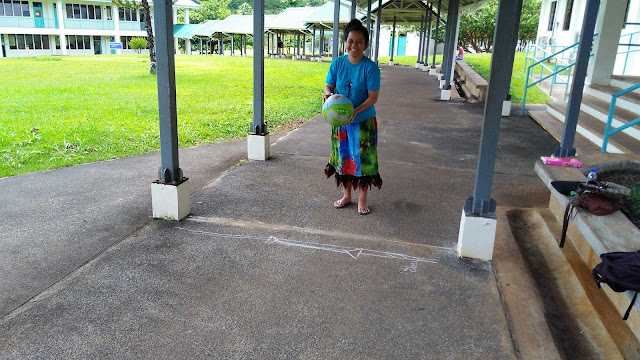 The triangular symbols marked off multiples of 300 cm. Multiples of 200 cm were marked with circles. Plain lines were 100 cm. The slow balls were timed on the 100s, the medium on the 200s, and the fast balls on the 300s. 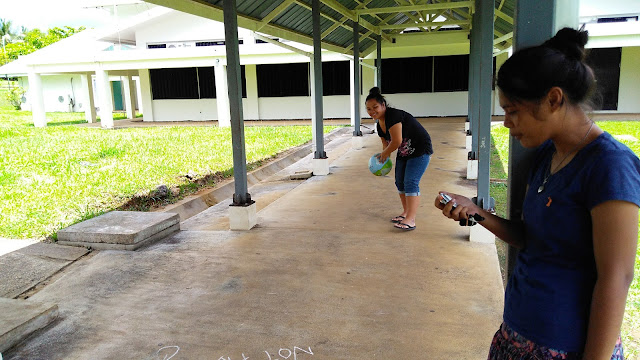 Mayleen has a go at bowling, Iva Nicole on the timer 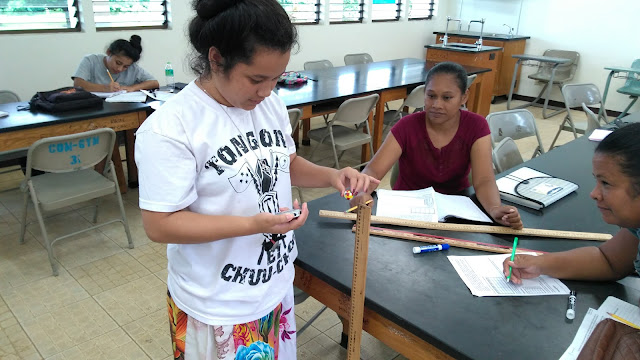 Heavy rain with wind gusts limited laboratory three to being an indoor laboratory only. This meant that only four data points would be gathered. 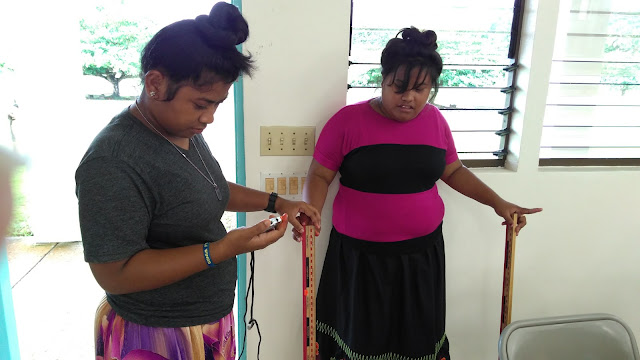 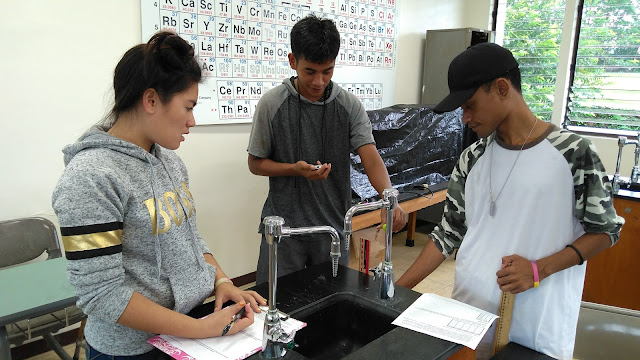 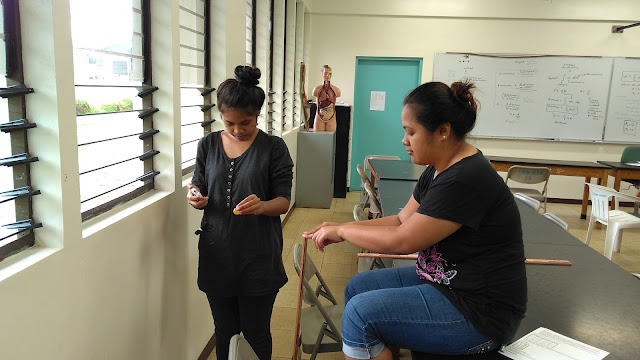 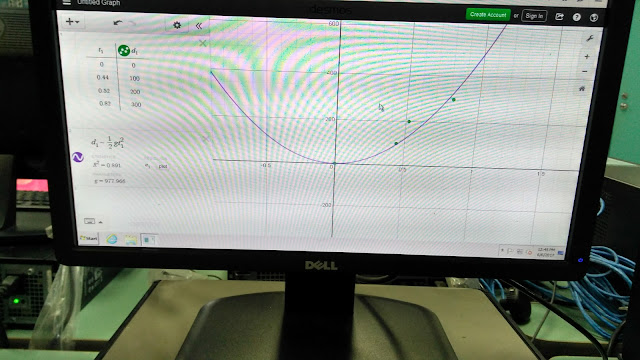 At 12:30 the open A204 lab permitted showing the students how to obtain g directly from the raw data by regressing against d=½gt² 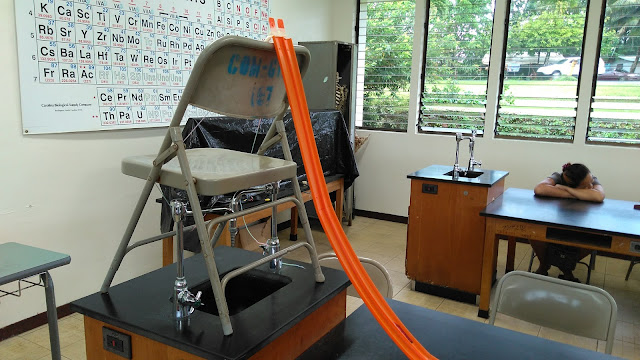 Inclement weather and a schedule that is wall-to-wall pushed an alternate marble ramp for the gravitational potential energy conversion to kinetic energy demonstration. 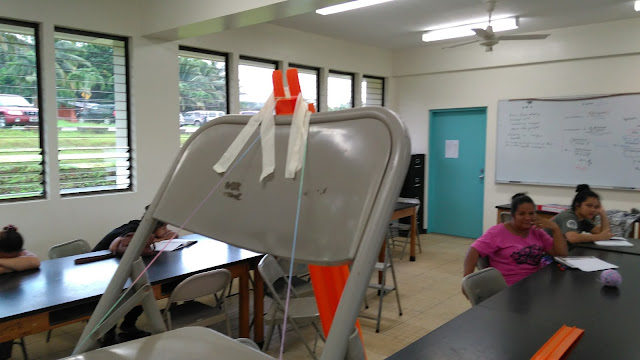 The chair was Percy's idea, brilliant. The masking tape was my solution to the yarn not working. 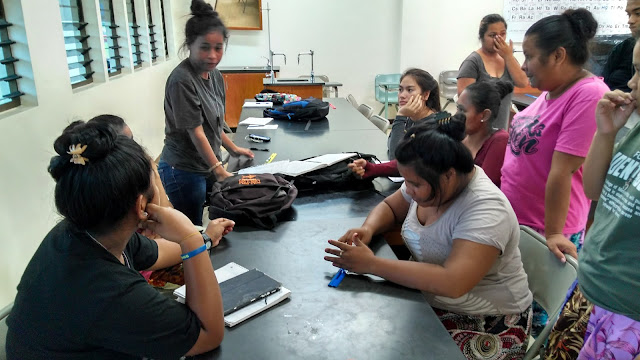 Laboratory four was done as a simple exploration of momentum. Only four groups were formed, two for weight, one surface area, one grit. The turn-in was reduced to a table and graph with slope analysis marked without a rubric. The original design of the summer session was one full laboratory report a week. Some courses only have a single laboratory report during the summer term. 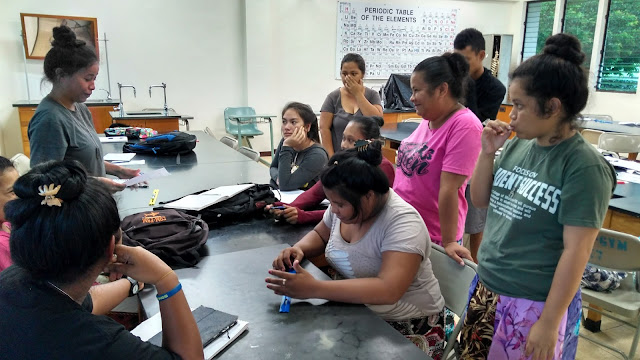 Three a week quickly proved overly ambitious, both from the student's perspective and from my ability to get reports marked. The goal now is one to two a week, so laboratory four was shifted to a lightweight turn-in. 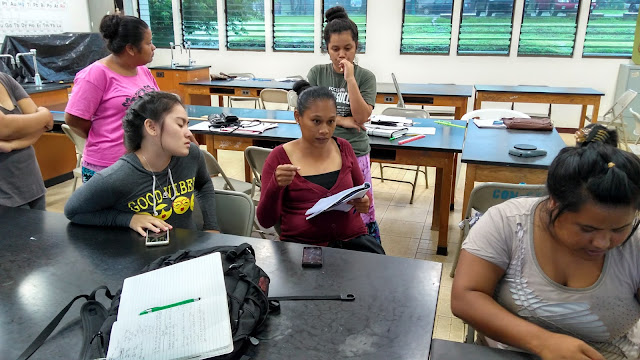 This momentum exploration is ideal for elementary and middle school classrooms. Marbles and rulers are all one needs. The summer version did not examine mass or attempt to measure speed. 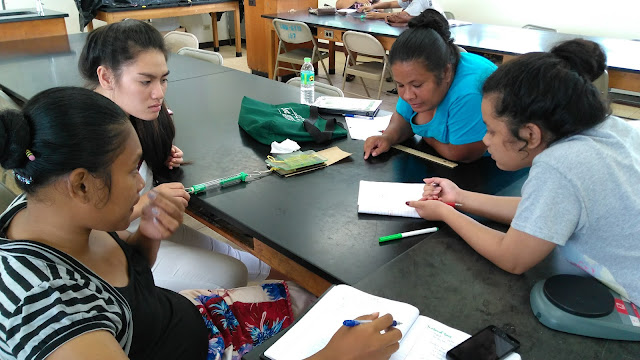 Jennifer pulls a glass sled over sandpaper with a spring scale in laboratory five. Herlinda records data being reported by Ronda. They were working on surface area effects.

The morning of lab five I did a "PowerPoint" of Newton's three laws on the sidewalk. This leads naturally to the first law holding if there is no friction. But what is friction? This connects the morning to the afternoon. 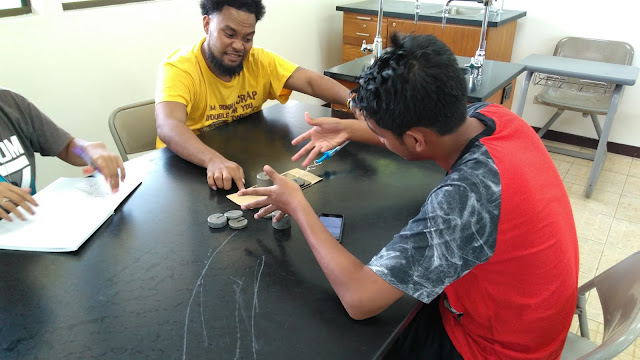 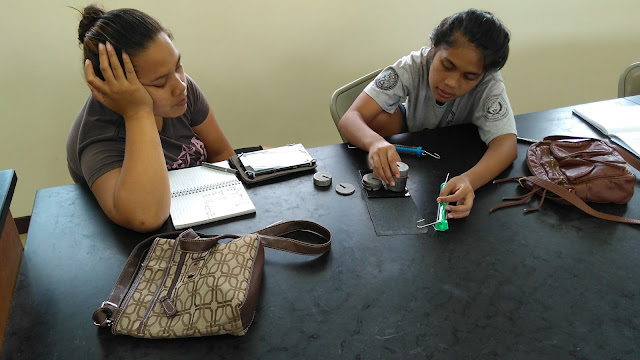 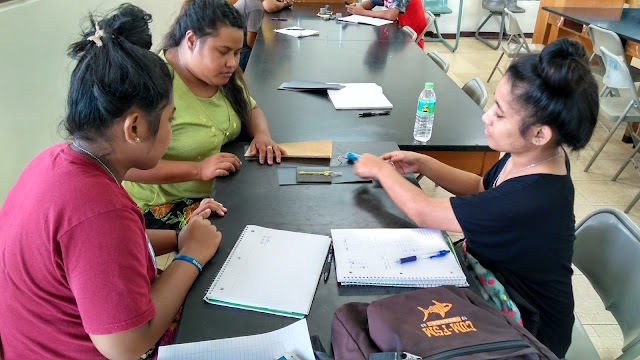 Genrisa, Siorine, and Stephanie were testing the impact of grit, or as Siorine put it in the morning RipStik session, mwangaingai   (Pohnpeian adj. bumpy, rough, not smooth).