June 30, 2017
The current regular algebra and trigonometry text in use during the regular term does not include polar coordinates nor polar graphing. Both are topics that are often a black-box mystery to students, hard to envision and perhaps even harder to graph. Polar graph paper helps, but there are an awful lot of calculations on a scientific calculator before one can "see" the graph.

The OpenStax Algebra and Trigonometry text in experimental use this summer includes polar coordinates and graphing. These topics fit rather well into the summer curriculum which also includes a look at vectors - vectors underpin so much of physics and the physical sciences, as well as being important in computer graphics. The x = r cos θ and y = r sin θ that the class first met in generating SVG coordinates using trigonometric functions return as conversion functions from Cartesian to polar coordinates. This pair of functions will appear again in the section on vectors. 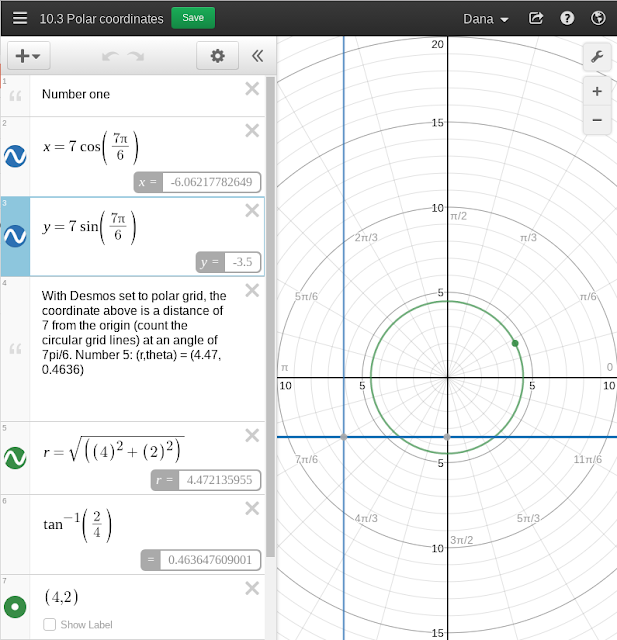 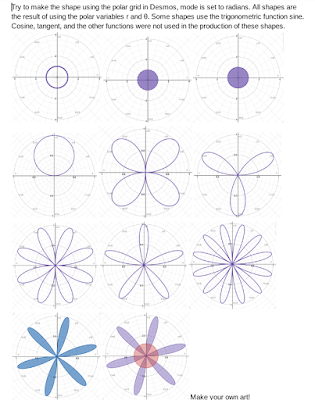 The students were encouraged to work together and to talk to each other, share breakthroughs and discoveries. Some students chose to work with other students, some students opted to work alone. The functions were actually all of the form r = sin(nθ) 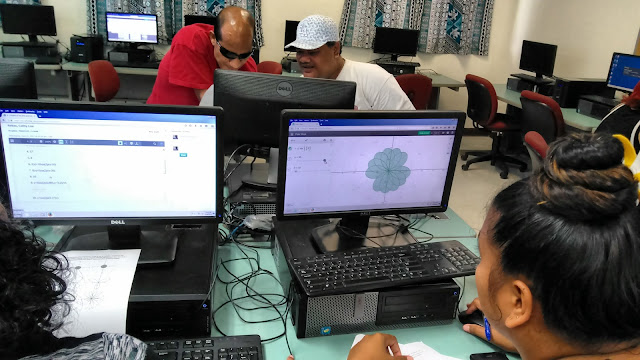 While some students worked from scatch testing functions, a few students discovered that Desmos has a Polar: Rose graph in the set of sample graphs. 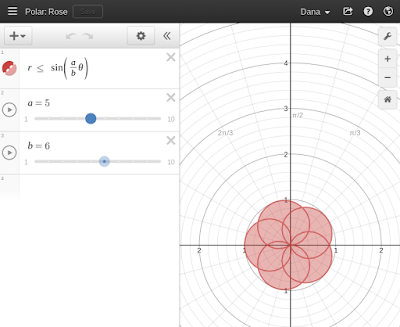 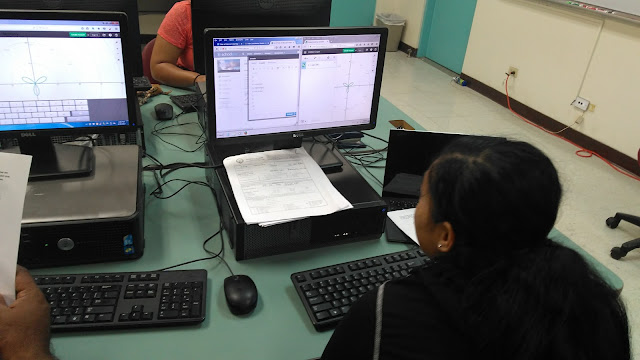 The students remained actively engaged with the activity through the period. By the end of the period the solutions for the shapes on the handout had been shared across the classroom. Note that I did not teach the students anything about polar functions. This activity was purely a discovery based activity. As I noted to the class, Desmos not only changes what we can study and access mathematically, Desmos changes the methods by which mathematics can be learned.

I termed the above exercise "polar art." I am keenly aware that some would not deem this activity to be mathematics. The students were not solving, factoring, or even multiplying. To access this material also meant trimming material such as the law of cosines and the law of sines. The class is not, however, a class of engineers and mathematicians. The vast majority, if not all, of the students are in majors for which this is a terminal mathematics course. This activity bordered on being fun, with some students expressing that they enjoyed making flowery shapes. These students are highly unlikely to ever see trigonometry again, and the probability of ever having to work with the law of sines or cosines is even more vanishingly small. If instead I can show them that math can be art, math can be beautiful, math can be fun, then perhaps I can spark their interest in mathematics. Some of my students are future or current elementary education teachers. I want them to see mathematics as a world of patterns, symmetries, and, yes, fun. Desmos provides a way to approach mathematics from a graphical perspective, while retaining core content. Desmos changes not just what can be taught but how that can be taught.
Desmos education mathematics tech