The color of light

March 17, 2017
Week ten in physical science focuses on the spectrum of light and the color physics of light. For the past seven or more years I have started the week with Bill Nye's Light and Color DVD. The DVD is entertaining but the scatter shot approach to the material employed by Bill leaves the students confused between reflected colors (which I am not trying to cover) and emissive color (which is the focus of the week ten lab). Week ten assessments documented the students' confusion.

On Wednesday of week ten I each term I explain the full spectrum and try to sort out the information in the Nye video. For a few years I looked for alternate color science DVDs but to no avail. Nothing fit my specific curricular needs.

After the college increased the Internet bandwidth I began looking for on line streaming options. Only YouTube, however, would consistently deliver at high noon in in the Media and Information Technology Center. Each year in week nine I ran searches for options to my aging, beloved, but ultimately confusing Bill Nye disc. This year I stumbled on Limits of Light from Austrian television that was produced as if for my class. The 2011 video is fifty minutes long (fits well into a period) and focuses on the spectrum in a way that my Wednesday lecture can only dream of. 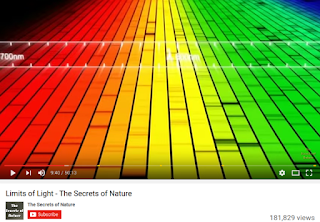 ​
The starts with green wavelengths of light and then journeys out through ultraviolet and on to cosmic rays. Each wave band has a feature devoted to that band. 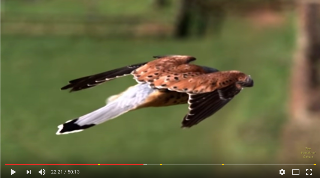 At UV the video has spectacular in flight photography of a kestrel, then revealing that the kestrel can see UV light. Seen in UV, a field with voles (prey) has UV reflective patches (purple in rightmost image) that cannot be seen by the unaided human eye. 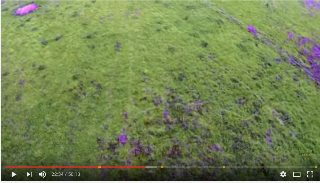 ​
The video then returns to yellow and explores all the way down to radio waves. I used a ChromeBook and HDMI connection to the projector to display the YouTube video to my class on Monday.

The clarity and breadth of the Limits of Light video provided more time for the students to observe the spectrum with CD-ROM spectrum boxes. The class also used the homemade spectroscopes to observe the fluorescent lights. Both activities actively supported having the students identify the colors that they saw in the spectroscope, the existence of indigo, and the visibility of cyan. In the largest spectroscope cyan can be seen, indigo, however, remains open for discussion.

Thursday I led off a light and color YouTube playlist with Vsauce's This is Not Yellow, hopping out of that video after the light segment and into Vsauce's Is Your Red the Same as My Red? Then I ran a minutephysics video There is no pink light followed by Tommy Edison's Describing Colors As A Blind Person. A Discovery YAFI - Colours of Light video and This Picture has no red wrapped up the playlist. 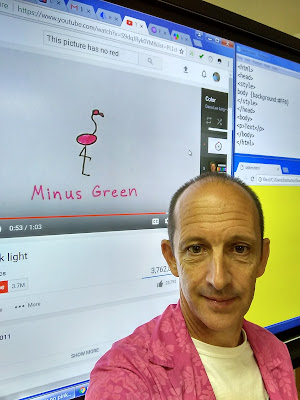 Knowing the content of There is no pink light, I wore a pink shirt over a white t-shirt. "Fake yellow" can be seen on the screen behind me, and on the screen you are now looking at. The camera could not balance the scene and made my shirt yellow, the wall (top right) yellow, and gave me jaundice. Color constancy helps the human brain correct for the yellow. 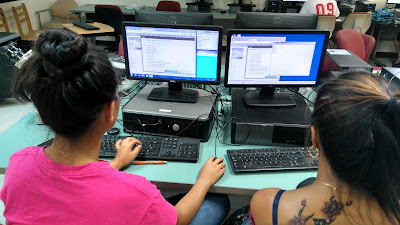 Students working on HTML code that allows them to "play" with the colors of light in laboratory ten. The new sequence provides far better coverage of the spectrum of light and keeps the focus on light and the color of light. This sequences better with laboratory ten, one of the older laboratories in the book, but one which still surprises the students.
physci