Ohigan and the clean up of Haruki

Each week of March 21st and September 21st the SC/SS 115 Ethnobotany class cleans up the Japanese cemetery that served the community of Haruki. 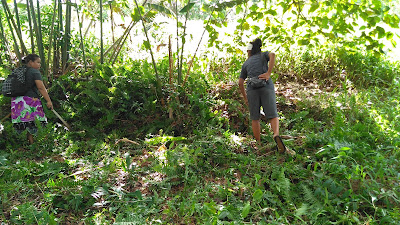 Working up around the Alpinia carolinensis

On the college property is a Japanese village cemetery from the 1930s and 1940s. The following is an excerpt for Mark R. Peattie's Nan'yo: The rise and fall of the Japanese in Micronesia 1885 - 1945. An additional note is included from Riptide by Willard Price, 1937. 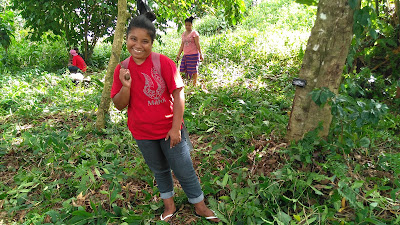 ...by the 1930s the finest research work was being done at the Ponape station [Kolonia], largely through the efforts of one man, the distinguished agronomist Hoshino Shutaro, who came to the island in 1927 and set about making Ponape the center of Japanese agricultural research in Micronesia. 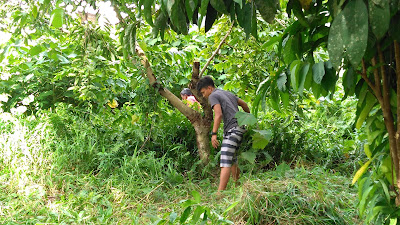 By the mid-1930s, moreover, Kolonia was not the only population center on Ponape. On the northwest coast, the government tried its hand at colonization when, in 1931, it established a settlement at Palikir, a small valley in the Sokehs district (Figure 16). Conceived as an important experiment in the suitability of Ponape as a place for Japanese settlement, Palikir (written in kanji by the Japanese as Haruki `coming of Spring') was designed to be a self-sufficient counterpart to the government settlements on Babelthuap. [Palikir is a Pohnpeian word which means "to carry a baby on one's back." The Japanese name of Haruki means "Coming of Spring" so there is no relationship between the Pohnpeian name and the Japanese name.] Certainly its early years appear to have been no less difficult for its founding settlers, twenty-four farm families from Hokkaido who struggled to make a living by growing vegetables to sell to the townspeople in Kolonia, some five or six miles distant. 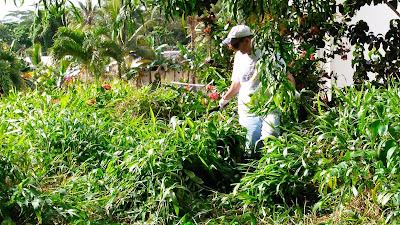 As the road between Palikir and Kolonia was poor, no vehicles could get to the village, and the first settlers, rising while it was still dark, had to make the trip on foot, carrying their produce on their backs. At first, there was often not enough to eat in the village, let alone to sell. There being no doctor in the community, some who became ill died without medical attention. The rain, heat, and humidity must have tested the strength and endurance of even the hardiest sons and daughters of Hokkaido. Yet somehow, with persistence and dogged effort, the settlers at Palikir put down roots and began to establish a firm economic basis for their community. By mid-decade Palikir was producing an abundance of vegetables that were transported by truck over a substantial government road and sold in Kolonia through the Palikir Agricultural Cooperative. 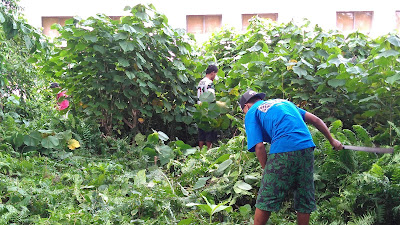 he villagers soon began to lay out rice paddies as well as vegetable plots; nearby, Nantaku leased land for the cultivation of pineapples; and on the southern edge of the settlement the Wakamoto Company started a cassava plantation. [This location appears to be incorrect. Cassava still grows in a kousapw called "Wakamoto" just south of Pehleng in Kitti. The hills were terraced by the Japanese. William Ioanis and his family now live on that ridge line.] By the time the young anthropologist Umesao Tadao visited Palikir with other members of the 1941 Kyoto South Seas observation mission, its appearance was idyllic. Climbing the ridge that separated Palikir from Kolonia, the visitors were greeted by a woman, clad in the traditional loose trousers of the Japanese farm wife, who escorted them to the settlement. Umesao and his companions felt as if they had come upon a mountain village in Japan, yet the lush mountains, the ferns, and the pandanus palms all spoke of the South Seas: 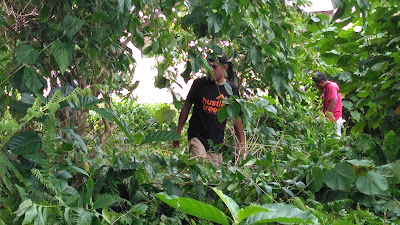 "From the ridge Palikir Village lay spread out before us, a small, isolated world unto itself, in a basin enclosed on the east by a range of mountains and on the west by the lower hills of the Nan Palikir. Here and there patches of fern lay scattered like green velvet from the ridge to the edge of the hamlet. Between them, unexpectedly for the red soil of this volcanic island, were rice paddies. Pineapple fields, laid out in narrow rows, formed plots of a somewhat different shade, and behind the paddies, surrounded by a grove of ivory palms, one could see the roofs of typical Japanese farm houses." 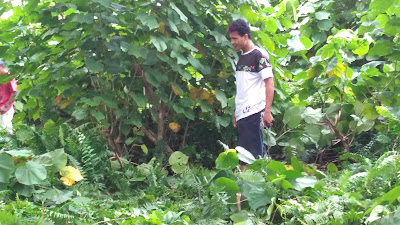 Though the government effort at Palikir, like those in the Palau group, was undoubtedly out of proportion to the returns it received, the eventual success achieved at Palikir appears to have been part of an attempt at the Japanization of Ponape, just as the Marianas had been transformed a decade earlier. With over six thousand immigrants on Ponape by 1941, with Japanese fields and farms rapidly encroaching on the wooded interior of the island, with Japanese villages in the hinterland blossoming into towns, and Kolonia on the verge of transformation from a town to a small city, there is little reason to doubt that had the war not intervened, Ponape would have come to rival Saipan as a Japanese population center.

Selaginella~ End of excerpts from Nan'yo ~ 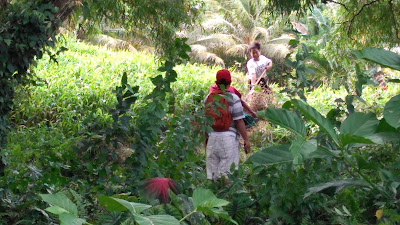 In late February 2003 Kazuhide Aruga of Japan visited the College of Micronesia-FSM. He came to visit the Haruki cemetery and pay his respects to the graves of his elder brother and younger sister, Natsue. Although the remains of the adults were exhumed after World War II and returned for reburial in Japan, there were apparently infants buried in unmarked graves. Thus the site remains a cemetery due to the presence of human remains. 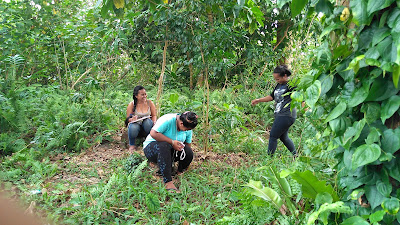 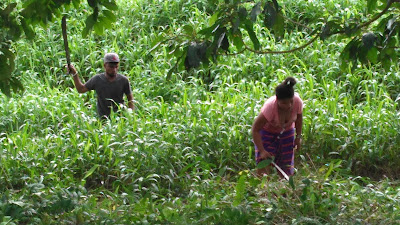 Photographs were taken by Francina Inoke,  Jayleen Rensile was in charge of the role. This term I wanted to clean up around the stone marker commemorating the death of Hoshino Noritake in 1945. The memorial stone was erected circa 1946 or 1947. 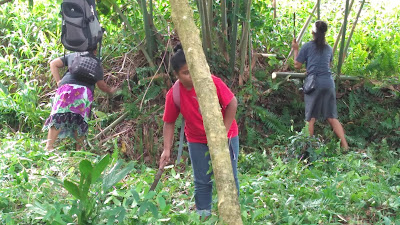 Sonya, Regina on the right

Nanyo remains in use to refer to these islands, as seen in a Kyowa shipping lines page. 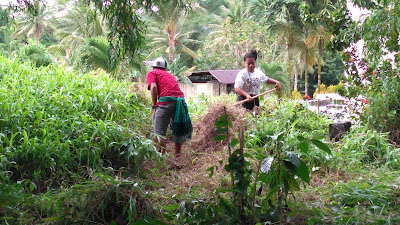 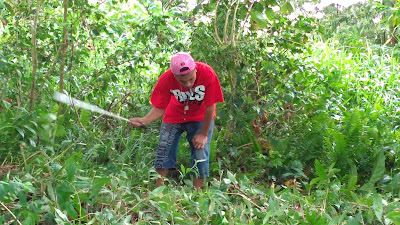 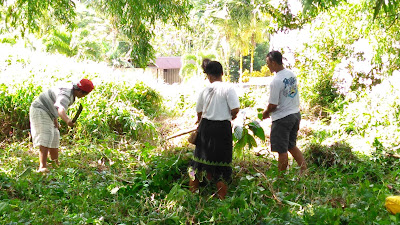 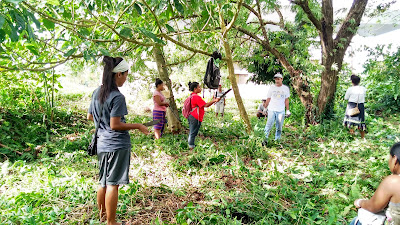 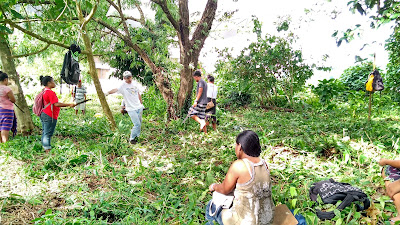 Explanation of Ohigan and cemetery 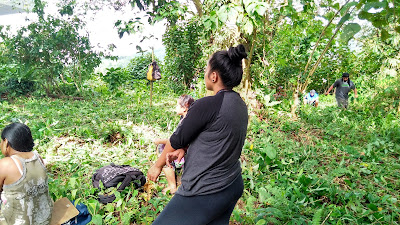 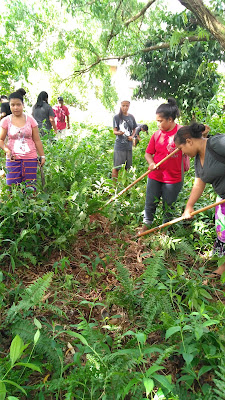 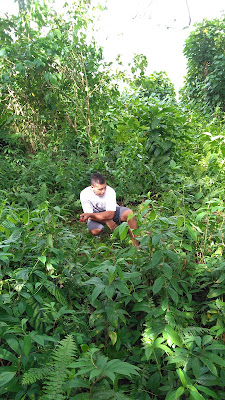 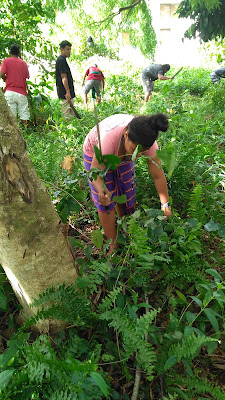 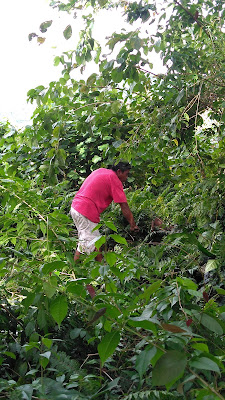 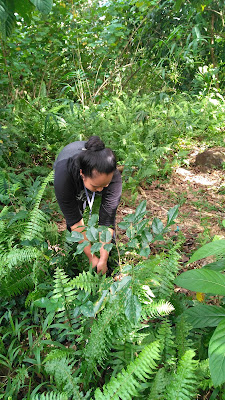 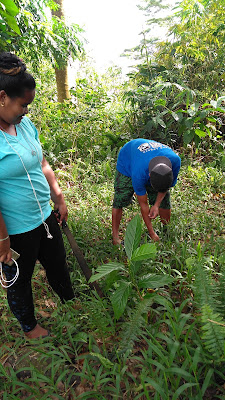 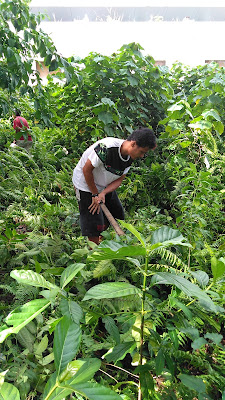