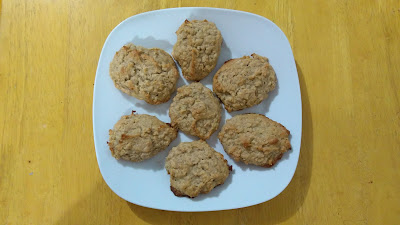 Utin ruk is a large banana plant that produces large banana stalks. The banana is not always favored for eating. While I enjoy a variety of bananas, utin ruk is often very sweet and the family never manages to eat the bananas as too many ripen too fast in the tightly packed hands. The banana thrives here, producing heavily without requiring care and attention. As a result the bananas are often as pig feed, or go unused. When I heard that Island Food Community of Pohnpei had utin ruk flour, I knew I wanted to test run the flour on a favorite food around the house - Kosraean coconut biscuits.

Coconut biscuits around here start with coconut, and I do not mean the stuff found in a plastic bag at the local supermarket. I mean the stuff in the biodegradable container. Outside. Laying around on the ground. 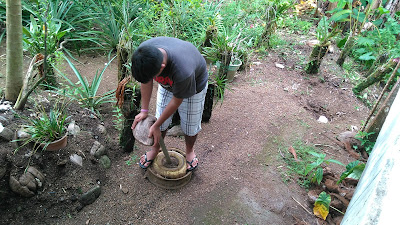 There is an outer husk that is unfamiliar to denizens of the temperature zone. This outer husk is there to provide exercise opportunities for youth. 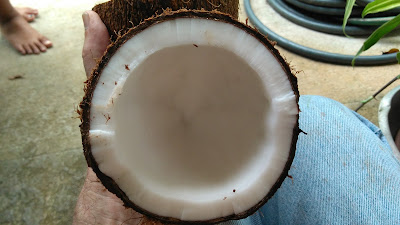 The inner nut can be cracked in half to gain access to the coconut meat. I did start to grind the coconut, but I was promptly fired for getting outer husk in the ground coconut. 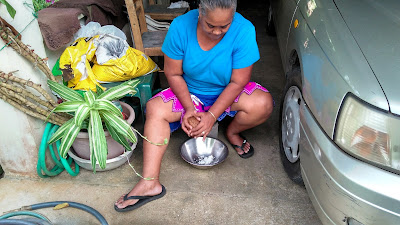 My replacement would take over the production of the biscuits, ensuring that if failure occurred, the fault could not be attributed to my having never made coconut biscuits. 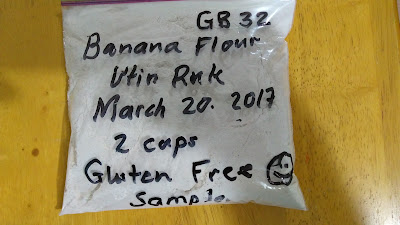 The flour was a fresh batch of utin ruk flour. 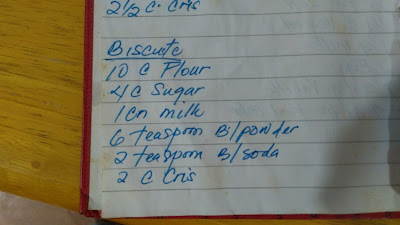 I wanted the recipe to conform as closely as possible to current practice in Kosraean coconut biscuits. The recipe is a family recipe that has been used to produce thousands of biscuits over many decades. The only modifications to the above recipe were that master chef in the house does not add baking soda to her baked products, and she does add vanilla. The recipe also does not mention coconut as the biscuits can be made without coconut, in which case they are plain biscuits. 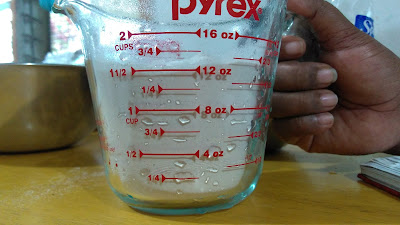 In order to scale the recipe, I had to measure the amount of utin ruk flour on hand. Using a liquid measuring cup I found that there was a cup and half of flour. Although refined sugar is not on the "healthy foods" list, I wanted to remain true to the recipe in use. The sugar was scaled back to two-thirds of a cup of sugar: 4 ÷ 10 × 1.5 = 0.6 cups. Two-thirds was a compromise approximation. 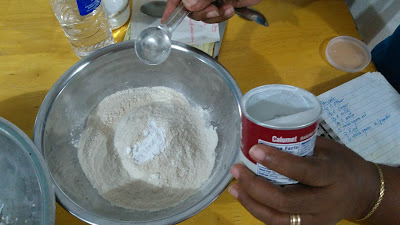 One teaspoon of baking powder was added, no baking soda. 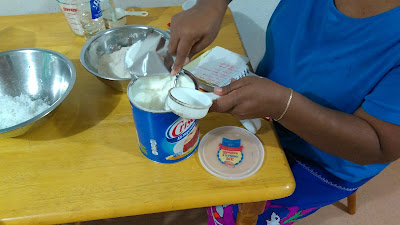 The Crisco was scaled back to one-third of a cup. I am reminded of a visit to my ethnobotany class by a food scientist many years ago. The food scientist explained that he was not a nutritionist, on the contrary, food science is the field that brought you milk chocolate and potato chips of which you cannot eat just one, you will want another and then another. That is food science - designing foods that you want to eat, not foods that are necessarily healthy for you. 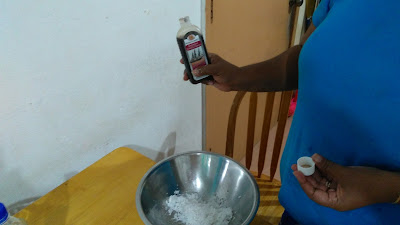 One cap-full of vanilla was added to the coconut. The amount of coconut was not specifically measured. 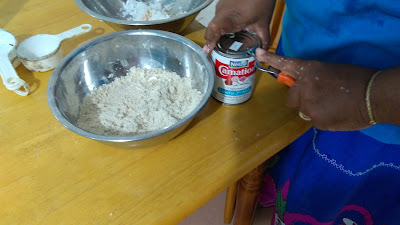 The milk referenced in the recipe is evaporated milk. 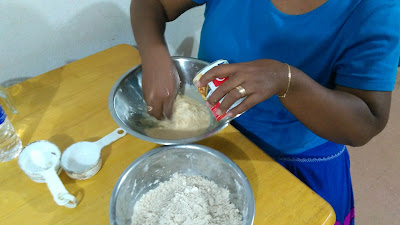 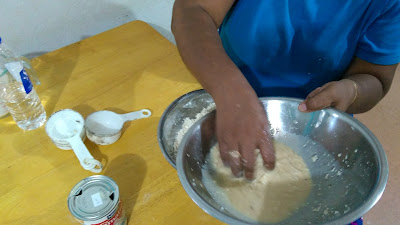 The consistency of the coconut plus the evaporated milk. 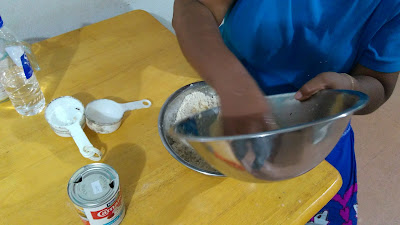 Add the liquid to the flour. 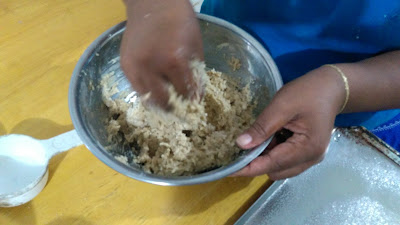 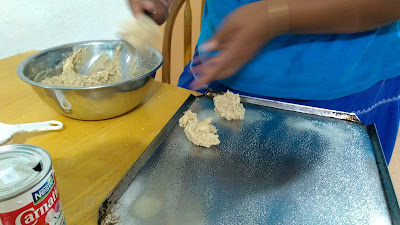 The batter is then spooned onto a cookie tray much as one would do with chocolate chip cookies. The master chef noted that biscuits are traditionally rolled out with a rolling pin. This recipe is designed to be spooned, no rolling. I suspect this allows a moister mix to be used. 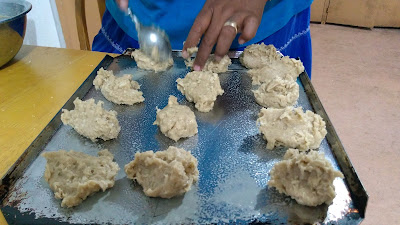 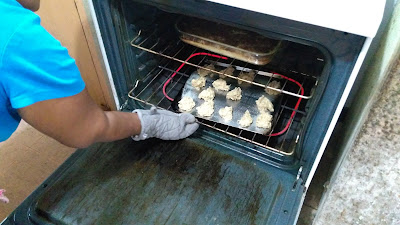 Into a pre-heated 350° degree oven for about 25 minutes. Here the key goal is a golden brown bottom. The chef ran visual checks, basing the timing on the appearance not on a timer. 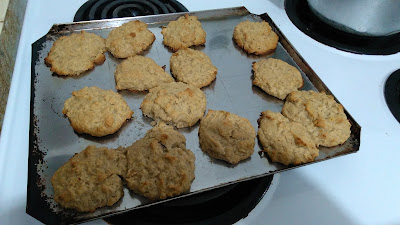 The resulting biscuits looked good and smelled wonderful. I was rather surprised at how well the biscuits cooked. 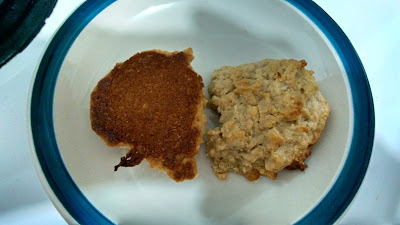 Golden brown on the bottom. 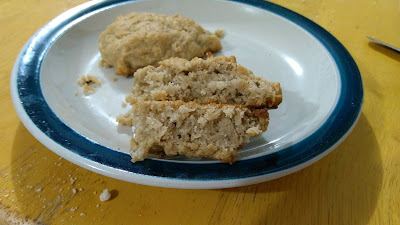 The biscuits were light and moist inside. The flavor was reminiscent of banana bread, but not as strong a banana flavor. Just a hint of banana bread. Everyone in the house liked them - they were softer and moister than a wheat flour biscuit and quite sweet. I suspect that there may be more sugars in the banana flour than in wheat flour. I was starting to think that with the addition of chocolate chips one could have a form of cookie.

One of the factors I am always on the lookout for is grittiness. Rice flours can produce an innate grittiness in baked goods. As a consumer of gluten free products for the past five years, I am aware of this problem for rice flours. The utin ruk banana flour was smooth - the biscuits melt in one's mouth.

The overall consensus in the house was that the utin ruk coconut biscuits are tastier than their wheat counterpart.

My thanks to the crew who did the work on producing these biscuits, especially the household master chef. I am deeply indebted to Island Food Community of Pohnpei for giving me an opportunity to try these gluten free flours and to experiment with them. As a child I had only known wheat flour. As an adult I came to know that there were a few other flours out there. What I had not realized was the breadth of foods that can be turned in viable, even excellent, flour. I am left wondering why ancient agriculture in Europe became so fixated on wheat. I realize that the cooking properties of gluten were desirable, but I am now understanding that many other foods produce flours that cook up as nicely or even better than gluten.