March 08, 2017
Having made an error of statistical logic on Monday, I wanted to find a way to illustrate hypothesis testing without the error. I gave every student five marbles. I asked the class what the average number of marbles per student was at that point. The class understood that five was the average. 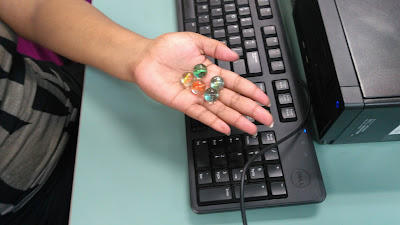 I then told them that they could either keep all five, pass one, two, three, four, or all five to a neighbor or neighbors. After the marbles were exchanged, including some rock, paper, scissors gambling with marbles as the stakes (one fellow cleaning out three neighbors of their marble stocks), I again asked what the average number of marbles is in the class. Although a couple students intuited the answer, I used an illustration using two students in the class. Even if Givelynn gives all five of her marbles to Receivelynn, the average remains five: (10+0)/2 = 5.

Each student was given a scrap of paper and told to write down the number of marbles they now had, including if they had zero marbles.

I then asked a student who arrived late to select five scraps of paper. I used the five to generate a 95% confidence interval, which included the population mean of five in each class. 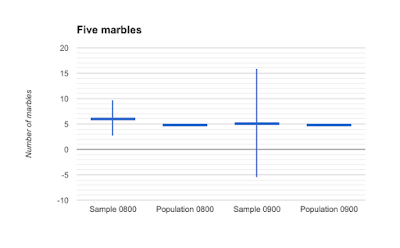 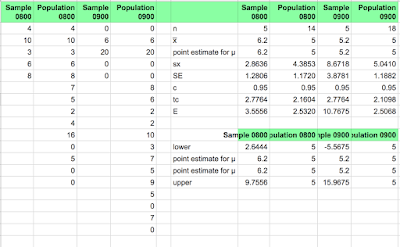 The above spreadsheet is available in Google Sheets, which now has support for the TINV function used to calculate t-critical.
statistics