December 20, 2016
SC/SS 115 Ethnobotany studies the plants people use and how people use those plants. While ethnobotany courses at some institutions target third year collegiate students who have completed biology and botany courses, SC/SS 115 is an open non-laboratory science/social science elective targeting the general education core with no pre-requisites. The course teaches botanic diversity alongside cultural uses of ethnobotanically useful plants. An equitable mix of the natural science of floral diversity and the social science of the use of plants by people is the foundation for the SC/SS moniker. 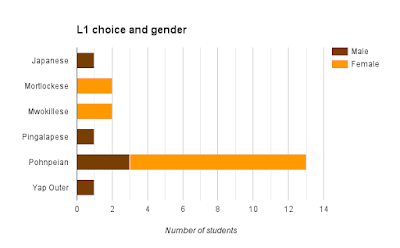 At term end a survey was administered to the twenty students in the course. The survey asked what most contributed to a student's learning, what obstacles impeded their learning, whether they interacted with the textbook, and questions of favored and disfavored activities in the course. 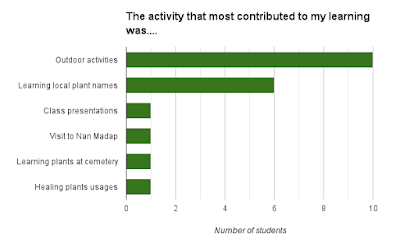 The students strongly felt that outdoor activities most contributed to their learning. The class engages in outdoor walks, hikes, and field trips as part of the course. The learning of local plant names was also a valued learning activity by the students. The students also give presentations, observed a cultural ceremony involving a plant in Nan Madap, learned about the collection of plants in an old Japanese cemetery (local plants, not Japanese), and learned about the healing uses of local plants. 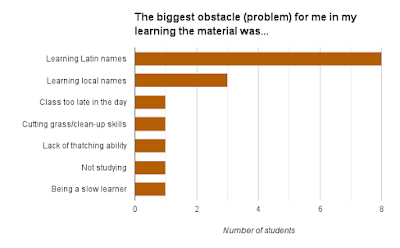 The students are not required to memorize the Latin names, but to be able to identify the Latin name for local plants on campus from a Latin name list of 75 local plants on campus. This task has grown more difficult over the years as the college, nature, and I have added plants to the campus grounds. The first flora list in the spring of 2009 had only twenty Latin names. Students identified 12 of the 20. Fall 2016 the students identified 20 plants and had a 75 Latin name plant list to work with. The course has adjusted for this by introducing the final at the start of the term and covering Latin names throughout the term.

The goal is not memorization of the Latin names but rather acquaintance with the names. This will allow the students, when on other islands, to use Latin name flora to help determine the local name of a plant found at home. Many students go on to schools in Hawaii, Fiji, Guam, some to Vanuatu. Knowing that their plants are there, the Latin names can be used to access local names so that locals there can help find a desired plant.

Note that local names were cited as both contributed to learning and as an obstacle to learning. 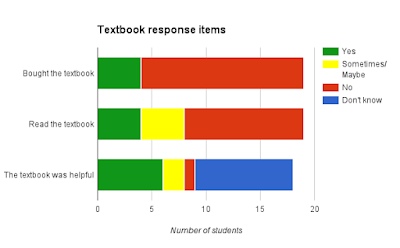 Very few students purchased the textbook. The ethnobotany textbook is available on line, thus students would not have to buy the textbook to access the text. Some students might also use a textbook purchased by a friend or relative in a prior term. When asked about ways to improve the course, one suggestion was to include images of the plants in the textbook to help students learn to identify the plants.

When asked "What would you recommend to improve the course?" ten students responded, "Nothing" with four students calling the course "perfect" and others using phrases such as "everything is fine," and "course was great." Two students noted that the class was too late in the day. The class meets at 3:30 in large part because by the end of class a student might be wet from the tropical rain, muddy from working in the field, or sweaty from hiking under the sun. The late hour also puts the class after the peak heat of the day, hiking at noon under a direct tropical sun would be a recipe for overheating and associated health issues.

Although the class is more often outside, two students suggested even more field and outdoor activities. One student, however, asked that the class "focus mostly on learning plant names, stay indoors, and less class outdoors."

When asked to choose a favorite activity, the answers were diverse. Six students did concur in choosing the trip to Nan Madap as being their favorite activity. Three students liked the field trips. Two enjoying cleaning in the banana patch and another two chose outdoor walk and talk activities. 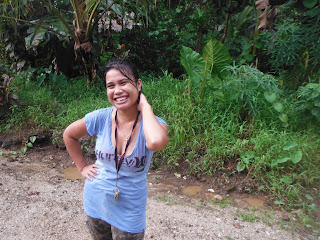 During that walk one student thought that the downpour was "fun." Rain is a part of the course and the students are told this on day one. Plants grow in the rain, and perhaps people do too.

While two students enjoyed cleaning the banana patch, four other students did not enjoy that activity. Three students disliked holding class inside. The term was a rainy, cloudy term, only one student cited walking under the sun as a least favorite activity.

The survey provides some insights into student reactions to the course and some guidance on how the course might be improved.
assessment ethnobotany