December 04, 2016
SC 130 Physical Science at the college is an elective course usually taken by non-science majors as a general education requirement. The students in the course this term are primarily in the liberal arts program, pre-teacher preparation program, with a few students each from Micronesian Studies, Agriculture, and Computer Information Systems programs. The course has 27 students enrolled, 26 students completed an affective domain assessment survey. The assessment looked at attitudes towards both science and the textbook. 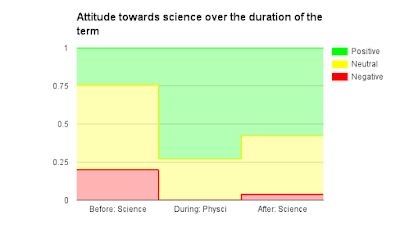 General education courses are intended to broaden the mind of the student. Their intent is to engender the development of the educated citizen. To create a thinking member of a community that can use their knowledge to make informed decisions in their life. Recently there has been a curious rejection of science and of facts in a variety of forms including those who are termed "climate change deniers", those who oppose vaccinations, and those who consider evolution to be a belief system contrary to a faith based explanation. And this is among individuals who have a formal education.

At some level science instructors must shoulder part of the blame. Science is all too often made unpleasant, difficult, and overly abstruse. Worse, science courses can all too easily degenerate into a collection of memorized factoids. Once a field is simply memorized factoids, then any other system of facts can be seen as equally valid. Science becomes one among many possible "belief" systems. Thus one sees phrases such as "I do not believe in climate change" as if this were a belief system to be subscribed to or not.

The physical science course is intended to be science as a process of investigation, an exploration, a journey. Not merely a collection of facts to be committed to memory. And the course is designed to be fun. The laboratory experiences are the core of the course, not an add on to the lectures. Each week focuses on a small area of physical science, avoiding the "1001 facts" in a six hundred page glossy textbook. The textbook is of my design and writing, and centers on a laboratory a week. Activities and demonstrations are guided by those that center on the laboratory for that week. The textbook does not contain many facts - facts are those learnings that arise from interacting with physical systems.

This makes for an unusual textbook, devoid of the broad swath of facts found in most physical science texts. The affective domain survey also looked at how students interact with the text.

Students responses to questions about the textbook

Seventy-three percent of the students purchased the text. The physical science text is also available on line, and some students opt to access the online text.

One potential unintended consequence of building knowledge from experienced activities is that existing collections of knowledge might not be seen as important to the course. When students were asked, "Did you study other physical science books (for example, those in the library)?", 58% responded "Never" and another 21% responded "Rarely."

The course focuses on the mathematical models that govern simple physical science systems and on communicating the results of laboratory work via laboratory reports. The students engage in doing science, not learning about science. One hope is that students might become interested in pursuing a career in a field of science as a result of the course. 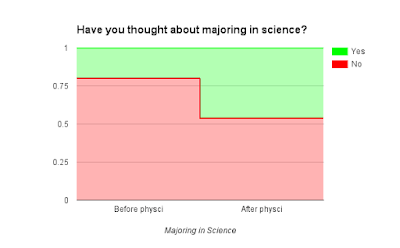 The data suggests an increase from 20% willing to consider majoring in science before taking the course to 46% after having taken the course. Again, both questions were asked post hoc. That said, the course may have encouraged students to see themselves as possible scientists.

In the student attitudes section of the survey 73% of the students responded that they had enjoyed the physical science course. That suggests that the intention of the course to make science fun was met. I would argue that this factor underlies the change in the number of students willing to consider majoring in science.

That the course is enjoyable, perhaps fun, does not mean the course is devoid of difficulty or has no content. The course demands a challenging amount of work by the students with a full lab report due each and every week. Technology, specifically Schoology, makes the work load manageable for the instructor. The course generates content which is still tested in a fairly traditional manner on quizzes and tests. Nor does the enjoyment come from the entertainment skills of the instructor. I have no skill in humor or entertainment. The enjoyment arises from engagement with authentic inquiry into physical science systems.

As noted by Blazar and Kraft in their recent research, teaching is a multidimensional endeavor and factors that impact student success, completion rates, perseverance, and ultimately graduation as thoughtful, educated citizens depends on many factors. Teaching is not just being a content matter expert in your field. To paraphrase Kraft, what you do as a teacher really does matter.