November 14, 2016
An informal convenience sample of 35 students consisting of 16 female students and 19 male students were asked to voluntarily and anonymously take the following paper-based survey:

Which of the following do you believe is sexual harassment? (mark all that apply)

◯ Stalking or cyberstalking
◯ Persistence in asking someone out on a date after being told no
◯ Commenting on someone’s buttock or breast size
◯ Commenting on how often someone hooks up
◯ Threatening to rape someone because they look so good
◯ Attempting sexual activity with someone who is under the influence of alcohol
◯ Greeting someone and telling them they look nice today
◯ Sharing intimate photos or videos of someone without their permission
◯ Telling of sexist jokes in class by an instructor
◯ Commenting by an instructor on how nice a particular student looks every time the instructor sees the student
◯ Whistling or hooting at a student of the other gender
◯ Unwanted physical touching
◯ Having someone make unwelcome sexual comments, jokes or gestures to or about you
◯ Being called gay or lesbian in a negative way
◯ Being shown sexy or sexual pictures that you did not want to see
◯ Being touched in an unwelcome sexual way
◯ Having someone flash or expose themselves to you
◯ Being forced to do something sexual
◯ Sitting down at a table in the dining hall where only one person of the other gender is sitting alone
◯ Learning about sexually sensitive topics in a classroom

The results, reported in descending order:

The correlation between the male and female responses was strong with r = 0.94. The largest differences of opinion did not exceed 0.24 in either direction. The top four items where the female percentage exceeded the male percentage were:


The results suggest these are areas in which the female students more often perceive sexual harassment than the male students. The small sample size and lack of the sample being a random sample means that while a difference is hinted at, the difference is not statistically significant.

"Optional: Have you ever been sexually harassed and in what way?"

The above goes to gender asymmetry. For the female students their responses may be based in part on experienced or witnessed incidents, a lived reality. For the male students the survey exercise is more likely to be hypothetical.

Note that the final question did not specify time frames nor locations. The question was intentionally left as a broad net with an indefinite time frame. 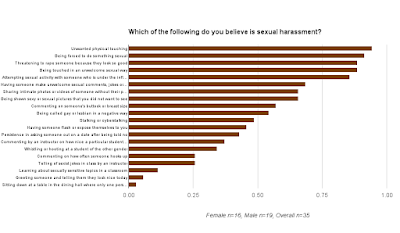 The survey was a one-off survey in an area for which the author is unaware of existing survey data for the student population involved. The survey was intended primarily as a starting point for dialog and discussion. The survey will not pass tests of reliability, validity, nor even a test for clear understanding of the terminology by those who took the survey. The results should be used with extreme caution. Consider them a glimpse into student perceptions, but not actionable data. The opinions expressed herein are solely those of the author. The author wishes to acknowledge the on line resources that assisted in assembling the survey including the University of Kansas Office of Institutional Research and Planning.