GPS hide and seek and meters per minute of longitude

October 02, 2016
Physical science GPS hide and seek took the students across the campus to the west side of campus beyond the agriculture building. I nestled in between a fence line and a tree. 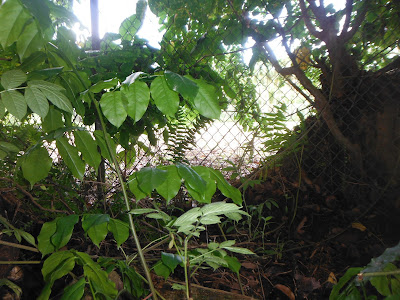 The view from my hide. By about 17 minutes after the hour I heard voices searching for me. I soon heard other voices calling out numbers. 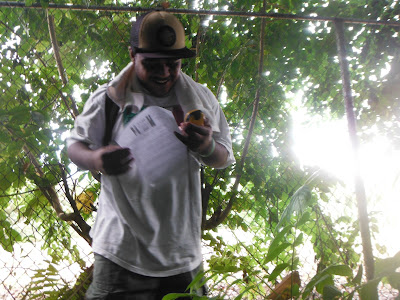 I gather that Tricia was the first to spot me from the trail that runs a few meters east of my hide, but Maxon bulled through the underbrush to physically reach me first. Tricia with Kenoma just behind her. I asked the students to read off their GPS units to see if the units agree with the coordinates on the paper and whether the GPS receivers concur with each other. 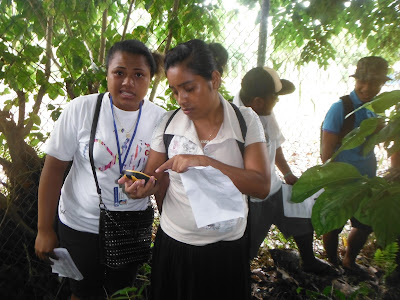 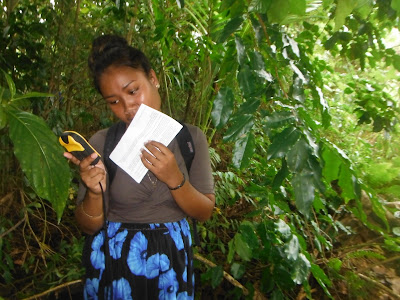 Misko also had a GPS unit and was close behind Tricia and Maxon. For the first time that I can remember, every group converged on my hide at about the same time. There were no lost groups this term. Could be a statistical fluke, or perhaps the students are becoming more accustomed to reading and trusting data on screens. In prior terms some groups disregarded the values on the GPS and looked for me based on a "If I were Dana, where would I hide?" approach. One group one term searched the gym only because "it was raining" and not because they had any evidence I might inside. Quite the contrary, I always note that the GPS units do not work inside. Ashley sought to use the college WiFi and Google Maps to locate me. Given more time, and a better connection, this would have worked. 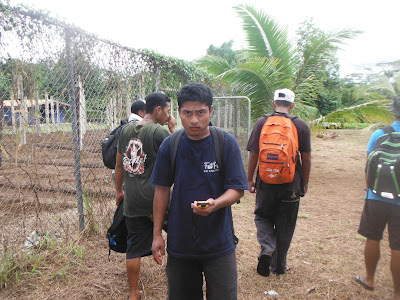 Kenoma also had a GPS. I would later learn that one unit has died. Old age in a high heat, high humidity environment. One of the original and oldest "blue dot" GPS from circa 2007 no longer boots up. 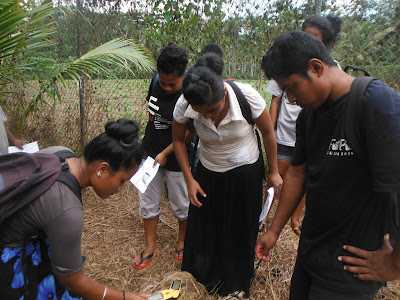 I had all of the students place their GPS on a stump to see whether they would display the same coordinates. The was a difference in the final digits of plus and minus 0.001 minutes. 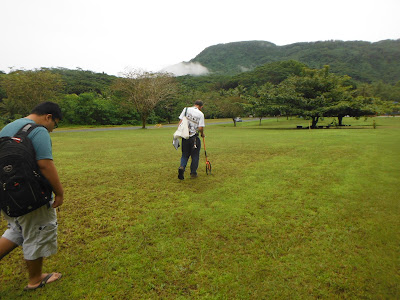 The structure of hide and seek leads naturally to the question, "How close can the GPS put one to me?" in other words, "How big is 0.001'?" As in "How many meters?" There are related questions such as "How many meters to go one arc minute on the earth?" 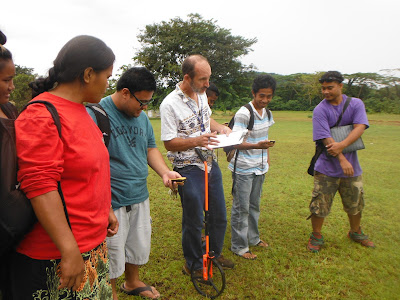 Impending rain caused me to launch right into measuring distances at 8:00. Rain was clearly inbound, so I ran an abbreviated outdoor session from the generator to the road, only about 90 meters or so. These photos are of the 11:00 section where a full 180 meter segment was measured. Upstairs at 8:00 I covered the current weather and the tropical wave which was causing the rain. At 11:00 pouring rain caused me to opt to delay class start by an hour and hope for a break in the weather. There was a break at noon, but the delayed start meant that I did not have time to cover weather as I had at 8:00. 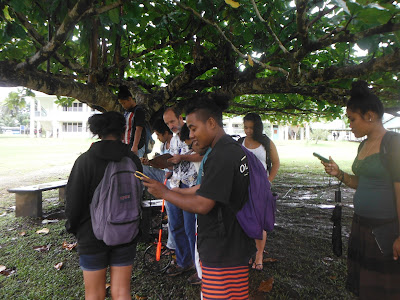 Josey with a GPS

I started from the "first palm" rather than the "second palm" and that worked well, although under the Terminalia catappa the ground was sodden, muddy, and sloppy wet. 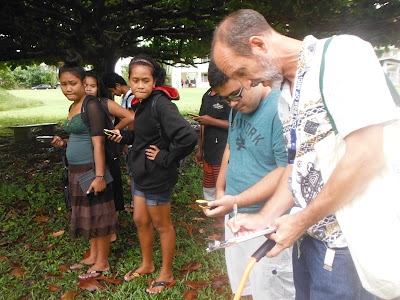 As the threat of rain returning remained, I handled the data recording to expedite the process. 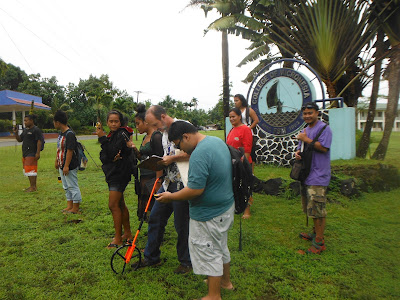 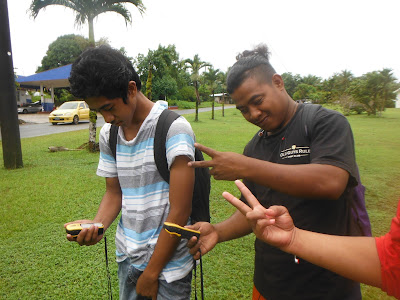 Josey cannot resist as Glenn studies the numbers on his GPS 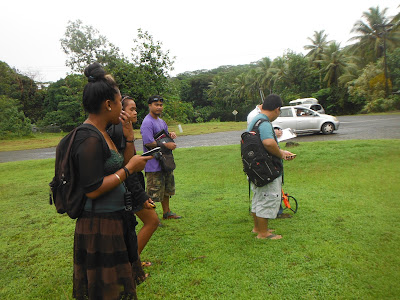 I had each student walk forward to 158 09.700 and then I measured the distance to their position. I would later convert these in the computer laboratory session.

This lab benefits from good weather which would permit more time to explore latitude and longitude out on the campus. Rain chased in the 11:00 lab, rain which began just as the group reached 158 09.700.