CHEEF starts with C for culture, and culture is the best place to start. Local traditional island foods are a core part of the cultures and customs of Micronesian. A party in Kosrae would not be complete with the soft taro dish fahfah. In Chuuk pounded breadfood, kón, is used in determining whether an apology is accepted between families. Consumption of local foods also promotes local farming and local farming practices - cultural practices and knowledge. 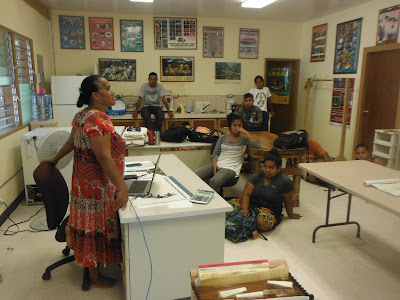 Emihner Johnson speaks to the class

The H in CHEEF is health. Promoting health is a second benefit of local foods. Many of the local starches have a high fiber content, which slows down the rate of conversion from starch to glucose. This allows the body to produce lower levels of insulin than would be necessary for a starch such as rice. Rice converts very quickly to glucose and the demand on insulin spikes as a result. Foods that cause rapid rises in blood sugar are correlated with the development of diabetes.

Local foods are also generally grown without chemical fertilizers and pesticides. On island, local foods are the original organic foods.

Some of our local bananas, breadfruit, and taro, have been shown to contain beta-carotenes, the precursor to vitamin A. Local food also contains minerals and trace elements that are important to overall health.

Local starches also gluten-free starches, a benefit for those who are gluten intolerant. At this point in the presentation Saimon Mix, owner of Saimon's market, dropped by the Island Food Community of Pohnpei office to deliver breadfruit flour. 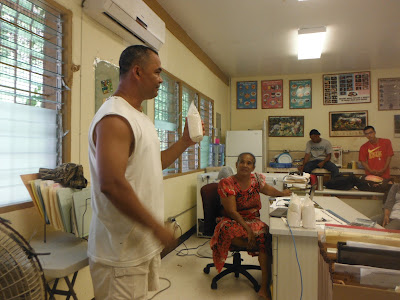 Saimon noted that breadfruit flour is now available in the local market. He had recently returned from a conference in Hawaii where breadfruit flour sells for as much as nine dollars. He noted that a significant portion of the local breadfruit crop either falls on the ground and rots or is fed to pigs, while the rest of the world is celebrating this healthy starch and paying top dollar to access breadfruit and breadfruit products. 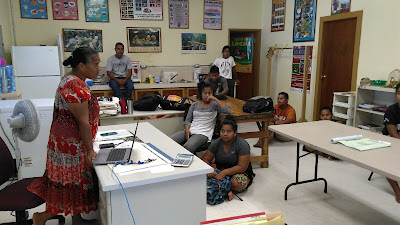 Emihner continuing her explanation of the benefits of local food

The second E in CHEEF is economy. Local foods benefit the economy. Local traditional foods are grown by on-island farmers. When one buys local foods, the money goes to a local farmer. The farmer, in turn, then spends that same money here on island. The result is that both the farmer and those from whom the farmer buys are gaining income. More than one family is benefitting from a single purchase. This is termed a multiplier effect. When one buys imported food, the money is sent off-island and no one else on island benefits from that money. There is no multiplier effect for imported foods, at least not in terms of benefit to the island.

In addition, when one eats local food instead of imported food, that represents an import substitution, and reduces imports. 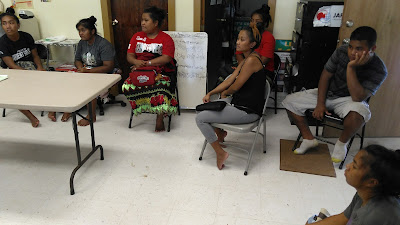 Students listening to the presentation

The letter F is the final letter in CHEEF benefits. Food security is having a reliable source of food in the face of uncertainties in the future global food supply. Potential impacts of climate change on food production could lead to shortages in the global food chain. Having a local source of food is food security. You cannot starve if you have all the food you need on your own land and in the sea around you. That is food security and only local foods can deliver this.

I noted that nutrition advice, especially for Pacific islanders, had shifted over the years. I mentioned the report in 2013 that noted a traditional high fat, low carbohydrate diet was found to be more beneficial for Pacific islanders. Last year studies were reported that found that dietary cholesterol and blood cholesterol are not necessarily correlated. Cholesterol levels are controlled internally with 85% of the blood cholesterol manufactured in the liver. Trans-fats, however, are unhealthy. Then a couple weeks ago news came of studies funded by the sugar industry in the 1960's to shift the blame away from sugar and toward fat. The real culprit in the non-communicable disease crisis in the Pacific is rice - a simple starch that converts quickly to sugars in the blood stream. 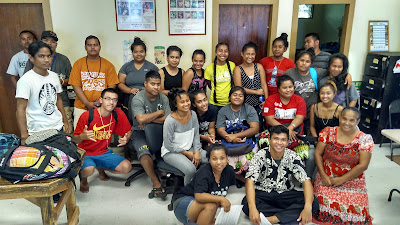 The complex, nutrient and fiber rich local starches had sustained Micronesians for centuries on their islands. Returning to the food of the local land and nearby sea are key components to a healthier life.

My thanks to Emihner Johnson and to Saimon Mix for their time and for sharing the benefits of going local, eating local.
ethnobotany