October 13, 2016
Week eight of physical science continues to morph into a clouds, weather, and El Niño focused curriculum. Access to a lap top, specifically a Chromebook with an HDMI output, has permitted continued use of a YouTube clouds and weather playlist on Monday, Flipping this is simply not possible here on Pohnpei. Few of my students have the necessary technology and fewer still have home Internet access. I was reminded of this the following week when I asked the class who had a cell phone that I could call. 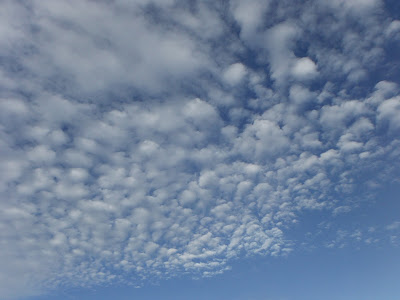 In the morning laboratory section only one student was actually carrying a cell phone. One student had an Android tablet, but the tablet was not stable. The tablet actually factory reset itself during the class. 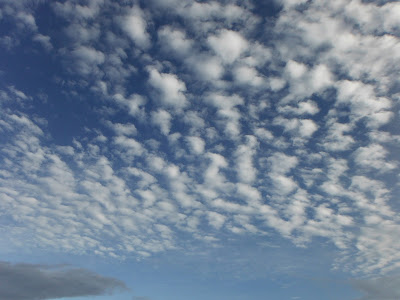 In the midday laboratory section three students were carrying cell phones. One phone had no SIM card and a second phone had a number that was unknown to the student carrying the phone. They noted the phone was actually a friend's phone. Only one student had a cell phone with a SIM card for which they knew the number. 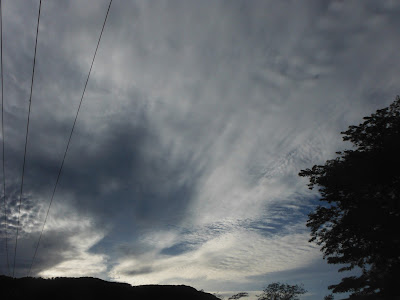 A mix of clouds with possibly some cirrocumulus in the background

Given the technology penetration, or lack thereof, videos cannot be assigned as evening viewing and must continue to be shown in class. The video begins with cloud names, continues on to information about precipitation, El Niño, La Niña, and wraps with some weather station information and hurricane hunter plane videos. The weather station and hurricane hunter videos are less relevant during the regular term and could be forgone. 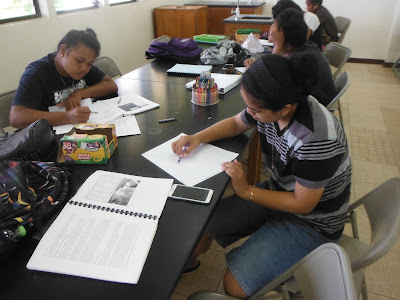 On Monday the Internet dropped out at 12:38 after the first video and did not return. This caused me to push the rest of the videos to Thursday. This worked well enough. Wednesday was used to set up the El Niñ0 presentation groups. Groups were tasked with defining terms and providing local language forecasts based on ENSO products. The presentations would occur on Friday. 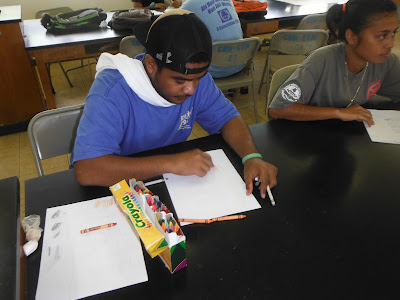 Maxon considers what to color

After the Thursday videos the class went downstairs to work on cloud drawings. The laboratory wrapped up with a planning session for Friday. 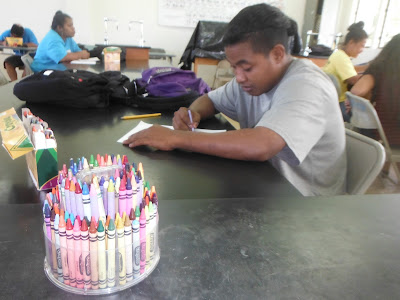 Josey with a 150 crayon tower 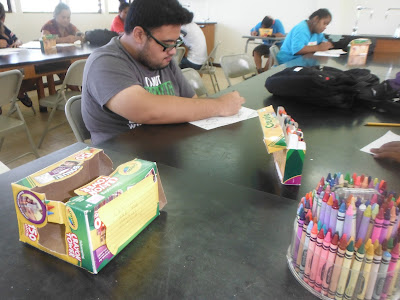 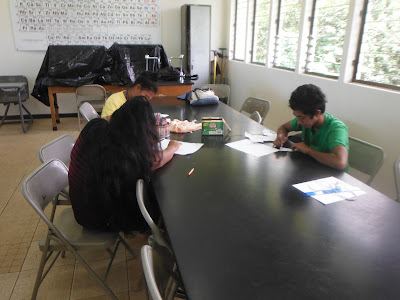 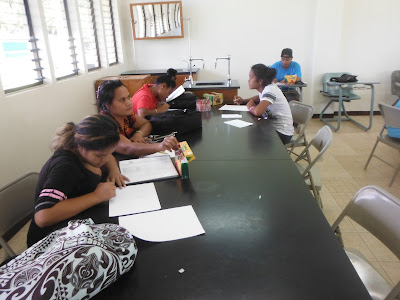 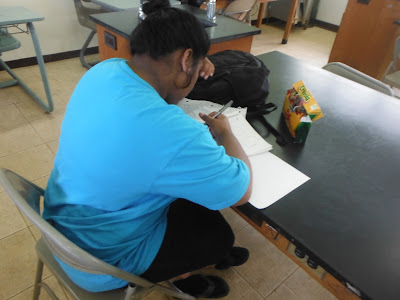 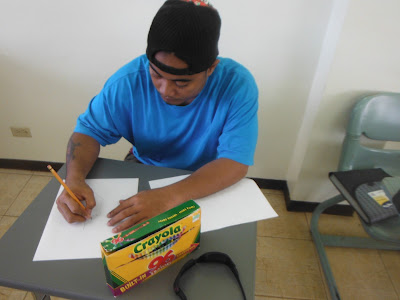 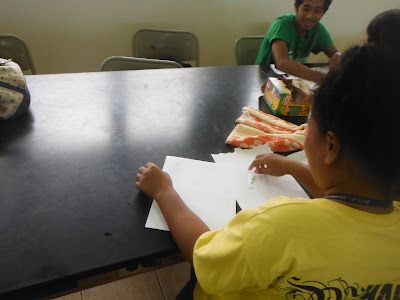 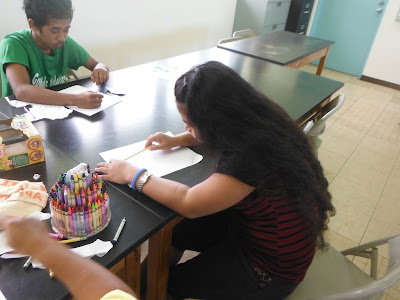 On Friday the students presented on the following topics:

"*Present a briefing on the projected storm and rainfall forecasts over the next few months for the island assigned to you.
Keep the briefing simple. Provide a briefing that a farmer or a fisherman would understand.
If you know the language, then do the presentation in the local language, just as you would have to do for a fisherman or farmer." 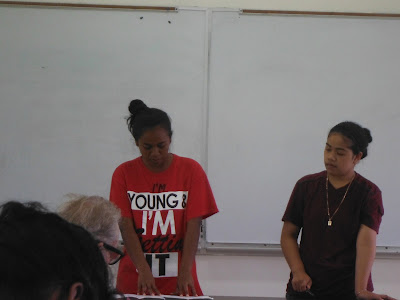 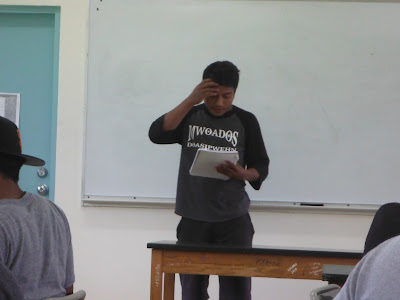 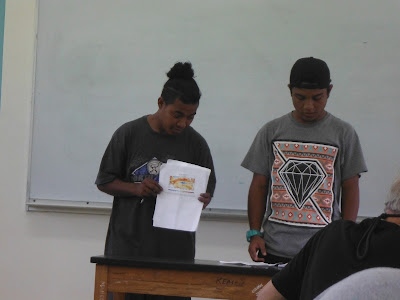 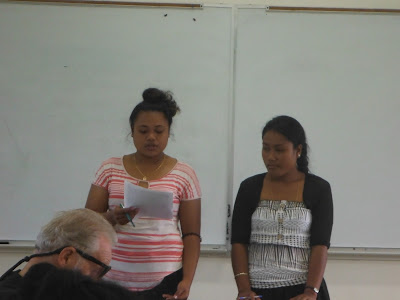 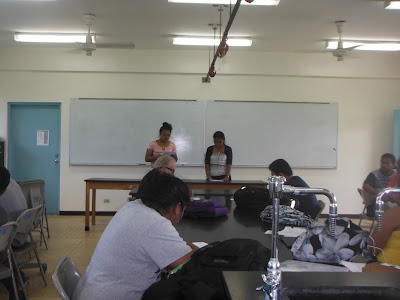 The class listening to Gayshalane 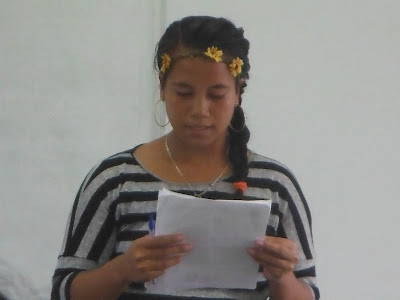 Rayleen David demonstrated going above and beyond the requirements of the assignment. Although a Pohnpeian speaker, she was tasked with presenting the Yapese local forecast in English. She was only required to present in English, but she chose to get the forecast translated into phonetic Yapese and then gave her presentation in Yapese. 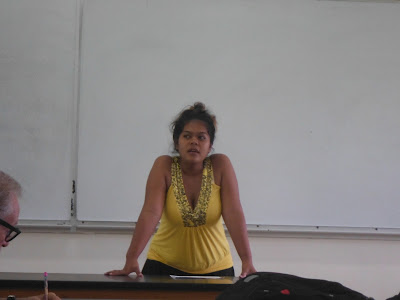 Madlina did her presentation in her native language of Kosraean