Chromebook end of week one update

September 16, 2016
Back in 2009 I looked at the capabilities of Google Docs to support an introductory statistics course. The lack of the TDIST, TINV, and TTEST functions meant that while my course could launch using Google Docs, by chapter nine the students would have to switch back to LibreOffice.org Calc or Microsoft Excel. Of late, however, the statistical capabilities of Google Docs have grown by leaps and bounds. All of the statistical functions from LibreOffice.org were ported to Google Docs including the t-distribution functions. Box and whisker plots, a chart type that neither LibreOffice.org nor Excel offers, arrived in a statistics add-in from Google. While the add-in also brought histograms, a separate histogram chart type also landed in Google Sheets, the spread sheet component of Google Docs. Google Sheets also gained the ability to add trend line to an xy scattergraph and display the coefficient of determination. 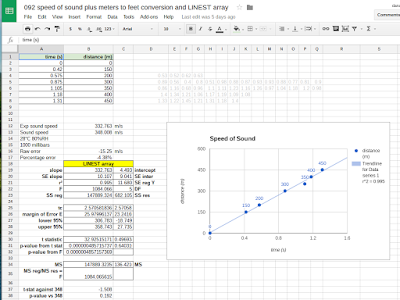 On a separate front, the learning management system I use in my courses, Schoology, integrated Google Drive (and thus Google Docs) into their platform. Students can submit Google Docs documents including Google Sheets spreadsheets from within Schoology. 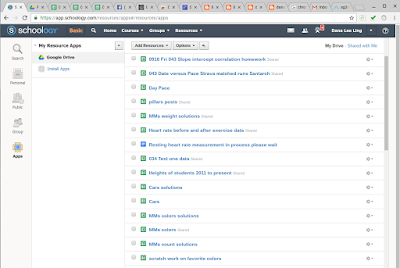 In the first quarter of 2016 Google Chrome operating system computers - Chromebooks - share of shipments to classrooms in the United States hit 51%. In May 2016 Chromebook sales edged past Apple Mac laptops. Note that Chromebooks run only the Google Chrome browser, the office suite is Google Docs. The platform which is rising to dominance in education markets does not run Microsoft Word nor Excel. Where an earlier generation cut their teeth on Microsoft Office in college and went on to run companies dominated by Microsoft Office on the desktops, a new generation is growing up on Chromebooks and Google Docs, a generation which will run the jobs of tomorrow on the Google Docs ecosystem. 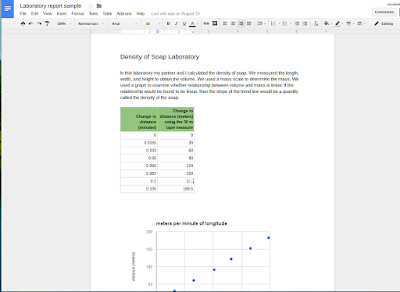 Between the rapid rise in market share for Chromebooks and the new capabilities of Google Sheets, I knew I wanted to pilot use of a Chromebook. To the best of my knowledge no member of faculty was using a Chromebook. Laptops on campus were either running Microsoft Windows or Apple OSX. Both of these systems ran what is effectively desktop operating systems with installed software. The Chromebook runs on a different model. There is no software installed other than the Google Chrome browser. The hardware is optimized to run Chrome. The only other software that runs on Chrome OS is an Android framework permitting the use of some Android apps on ChromeOS. All productivity software is cloud based - such as Google Docs and Gmail. A Chromebook is relatively dysfunctional without an Internet connection. Driving the growth in market share for Google Chrome systems is the price points. Educational bulk orders price in as low as $149 for a basic Chromebook. Opting for an Acer Chromebook 14 running an Intel Celeron Quad Core processor with 4 Gb of RAM, 32 Gb of eMMC memory in lieu of a hard drive, 802.11ac WiFi, a 14 inch HD display, and a built in camera is only $299 stateside, a tad more with shipping to a remote island in the Pacific. Note that the computer has no hard drive. While the 32 Gb of local storage might seem small compared to modern hard drives such as the Terabyte found on some Apple desktops, bear in mind that the Chromebook primarily stores documents in the cloud. And that Google Docs do not consume any space on a Google Drive. Zero. 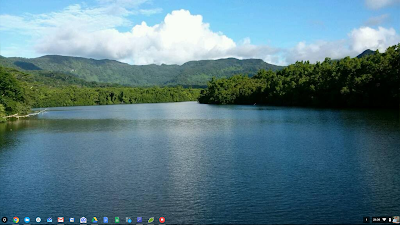 The desktop interface is a fairly straightforward layout with an app/extension launcher in the lower left corner of the screen. To the immediate right are apps/extensions that are pinned to the "shelf," the name Google uses to refer to what a Windows jockey might call a task bar, an Ubuntu driver a panel, and a Mac OSX user a dock. On the far right is a notifications and system tray area. Open apps also appear on the shelf. 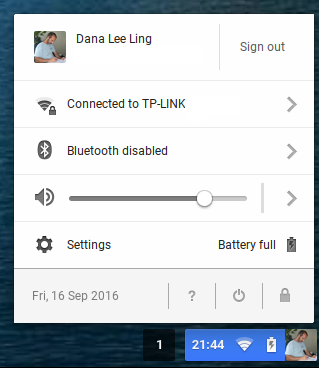 Some apps are pinned to the shelf, the ones on the far right are open but not necessarily pinned. Some "apps" are actually link shortcuts, such as the Schoology "S" icon. Clicking this icon opens Schoology in a tab inside Chrome.

The launcher launches a screen not entirely unfamiliar to veteran Chrome users. 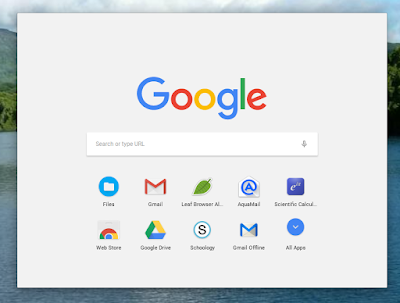 The most recently accessed apps appear on the first screen, the All apps option shows the other apps and extensions available. 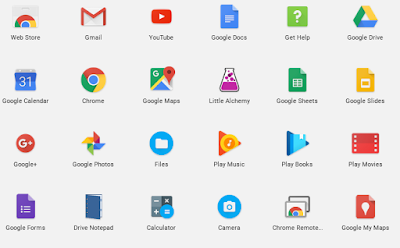 The All apps screen is reminiscent of an Android or tablet home screen. The core productivity application suite is Google Docs/Sheets/Slides/Drawings/Forms. The file manager, called Files, is a bit spartan compared to a desktop file manager. 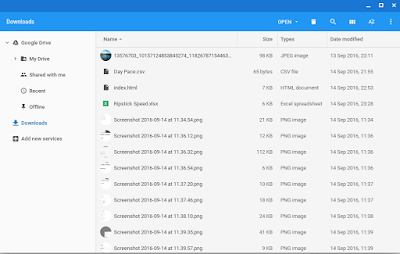 Gone are the familiar Documents, Pictures, Music, Videos folders. The primary local folder is Downloads. The other folders are Google Drive cloud folders. 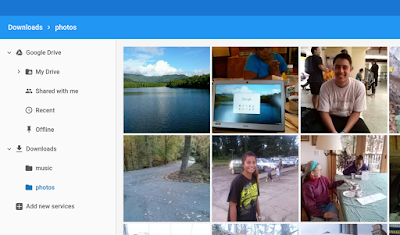 After years of considering the "My Documents" folder to be a "home folder" Chrome OS suggests that anything local is essentially a download. Download is local, and other local folders will be subfolders of Download rather that My Documents or /home. 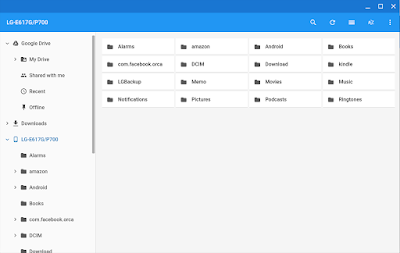 Connecting an Android 4.1.2 Jelly Bean LG P715 and selecting Media Transfer Protocol automatically opens Files and provides access to all files on the Android rig. No searching for drivers, no waiting, none of the connection issues that I have sometimes seen on both Windows and OSX rigs.

Bear in mind that at this point the Chromebook used to make the connection has some form of Android framework on board that downloaded with the first Android app I selected from the Chrome web store. That download was large - over 100 Mb - and took time. There was no warning that a five Mb app would trigger a 100 Mb plus download, but that Android framework download is a one time event.

At the bottom of the tree and leaf menu is "Add New Services." One of the services that can be added is an sFTP service which is actually an independently developed app available in the Chrome web store.

The default email is Gmail, but Chrome OS does offer a Gmail Offline app that functions offline and synchs when the app reconnects to the Internet. 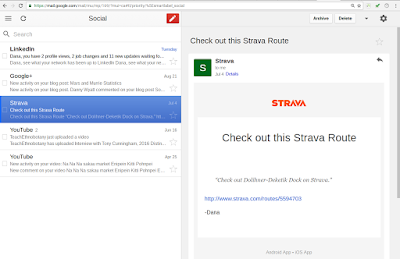 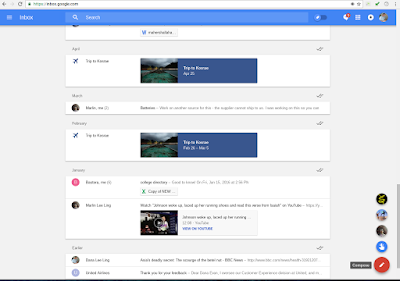 For handling IMAP mail an app called CloudMagic was a top choice in the Chrome Web Store. In the past few days, however, CloudMagic has been renamed Newton and is now requires a paid subscription. Although on Android Aqua Mail Pro carries a charge, Aqua Mail Pro on Chrome remains free. 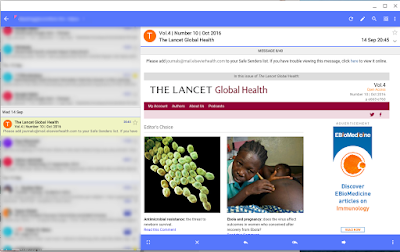 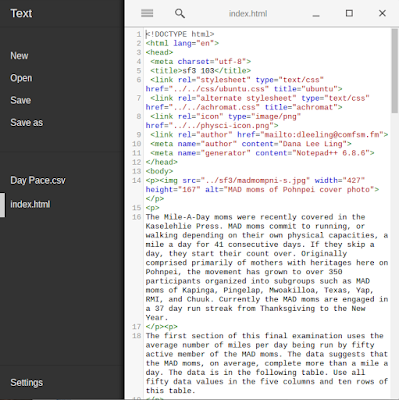 The colorized text editor and sFTP service noted above means that coding and development work on web pages written in HTML5+SVG+CSS+MathML can be accomplished on a Chromebook.

There is the issue that only FireFox natively displays MathML and FireFox does not run on a Chromebook. There is, however, a MathML renderer for all browsers, MathJax. The MathJax Consortium is a joint venture of the American Mathematical Society and the Society for Industrial and Applied Mathematics. MathJax is a JavaScript platform delivered by a content delivery network. A single JavaScript script call in the head of the web page enables MathML in any browser: of a web page enables MathML in any browser including Chrome.

This is the "last mile" piece that a developer of mathematical web pages needs to use a Chromebook as a lightweight web page authoring platform.

Editing images is nicely handled by Pixlr, an on line photo editor. "Installing" the app just adds an Internet URL shortcut to the Launcher. The shortcut can be pinned to the shelf as well. 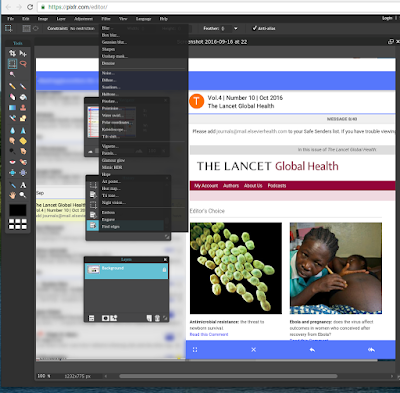 The on board Chrome calculator is sufficiently capable, although the calculator does lack parentheses.

A calculator that can handle parentheses and a far greater range of functions is available as a Chrome extension. 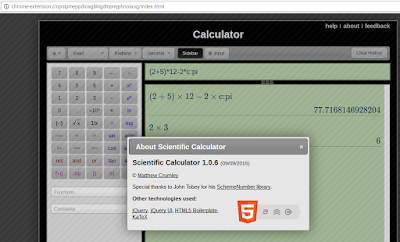 Oddly enough on a system called Chrome there is even an alternate browser for Chrome OS that uses a stem and leaf user interface. 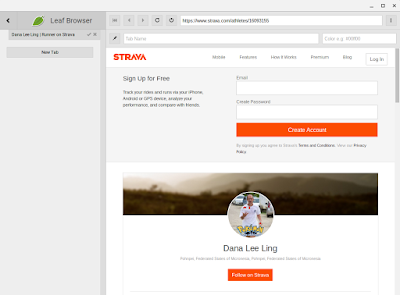 The Chromebook boots very quickly and shuts down instantly. Windows are restored to where they were left at last use. Closing the clamshell puts the computer into a sleep mode. A Chromebook can support multiple users, each with their own Google sign on. Battery life is a generous and capable twelve hours. And the unit does not heat up or become warm on one's lap. The units require no antivirus software and update automatically without user intervention.

In operation the unit is fast and responsive, slowed only if the Internet connection is not fast.

Chromebooks can open files such as Microsoft Word and Excel using Google Docs.

There was an initial hiccup in connecting the college network the cause of which I was never able to ascertain. Whatever that issue might have been, twenty-four hours later the computer was to connect to the network. A couple days later a student who had been experiencing connection difficulties was also able to connect to the network. These are some of the teething issues to be expected in bringing a new technology into an existing infrastructure, and one of the reasons to pilot test a technology before broader adoption decisions are made. 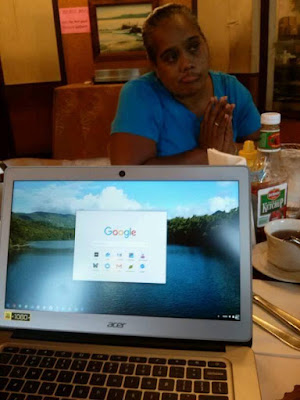