As is often the case, the thought first struck me while out on a run: "What would happen if I walked into class on the first day and the first thing I said was, 'Presentations are due on Friday.' Any questions?" When I voiced this to my son he said the students would be confused and scared. First day fearfulness has been identified as an issue in assessments done fall 2015 and summer 2016. The data source for the presentation had to be something fun and the statistical aspect had to be accomplished on essentially zero knowledge. In the realm of statistics there is a widely known known statistical exploration exercise based on the work of Forrest Mars and Bruce Murrie seventy-five years ago. 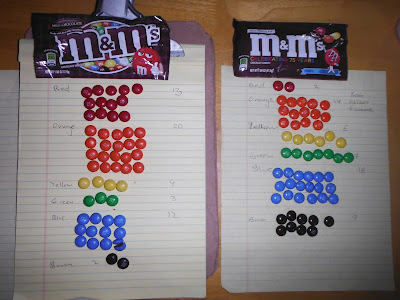 With three sections of statistics, there is considerable up front costs in this approach, especially on the remote island of Pohnpei. In a request for funding what can one say that will make sense from a learning perspective? I opted for "Consumable supplies for problem based learning activity in MS 150 Statistics for estimated 72 students," which was the actual course wide count as of a week ahead of class. In theory the three sections could expand to 30 students each, 90 students in all. While I knew that 72 might be short by the time class started if students added the class, I also expected some absences on the first day of class. I did not have data from which to project absenteeism for the first day, and cases are 36 count, so I opted to go with two cases. 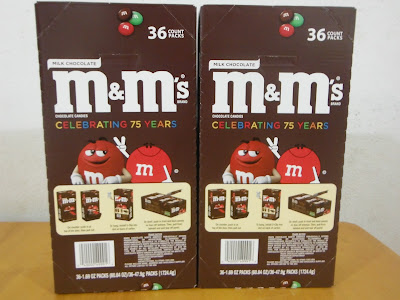 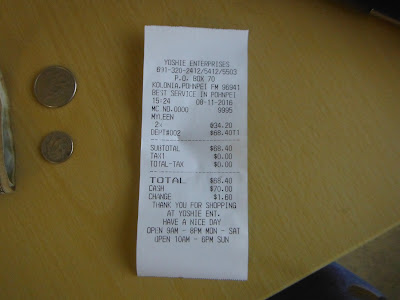 The business office noted that the receipt above is insufficient, a written itemized receipt is required.

The presentations were driven by eleven questions:
The students had just under four days to put together their presentations. Learning to quickly turn around data into a presentation is a useful skill in the modern world.

On Monday morning I opened class with the following, "Good morning. Welcome to MS 150 Statistics. Presentations are due on Friday. Any questions?" The response was silence. "Good. Get to work on your presentation." In each class one student braved the silence to ask, "What are we presenting on?" "Excellent question..." and I then began handing out the MMs and explaining the assignment. On the SMART board I displayed the assignment with the questions in Schoology. 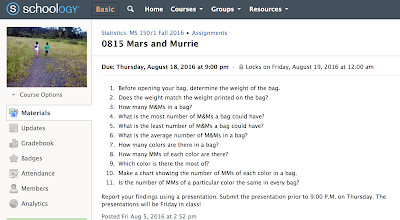 The weight of the MMs would turn out to vary with the number of MMs in each bag. Preliminary results suggest that the MM count varies between 53 and 59 for the 75th anniversary bags. 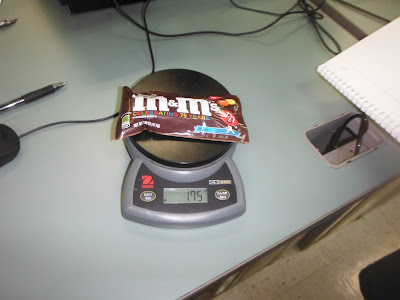 The bag itself is roughly 0.04 to 0.05 ounces. The MMs were measured in bag for the most part. 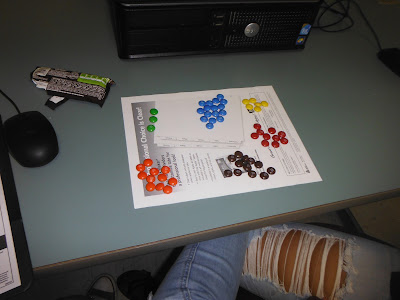 The number per color would vary widely bag to bag, with more variation that even I expected.  The filling process has a randomness to it.

Giving each student their own bag of MMs and having the students work in pairs proved critically important: the students immediately discovered that the bags varied in MM total count and the relative frequency of the colors. This led to good discussions in each pair, and between neighboring pairs, over how to tackle the questions posed. The students were engaged in discussing data and statistics. 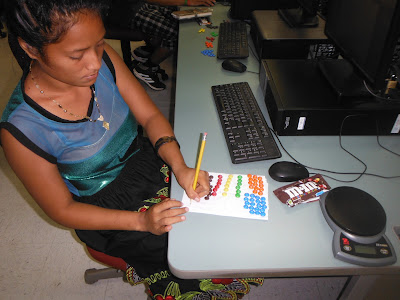 I asked the students to pick their own partners - I wanted them to have some sense of control over the process. I also knew that in life one often gets to choose partners for projects and I wanted to mirror that as well. I knew too that many would choose someone they knew in the class, which would increase their sense of comfort. One article I had read over the past summer argued for permitting problem based learning groups to remain stable, to not force groupings nor change groupings. The article noted that there are learning benefits to keeping the teams intact.

Some students started to create chart like layouts with their MMs on their own, unprompted. 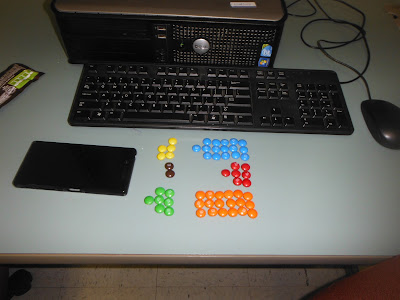 An area mapping of color counts. 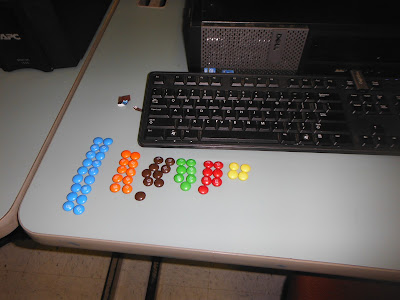 A physical column chart. The column chart made concrete, or, in this case, made candy! Technically a Pareto chart! 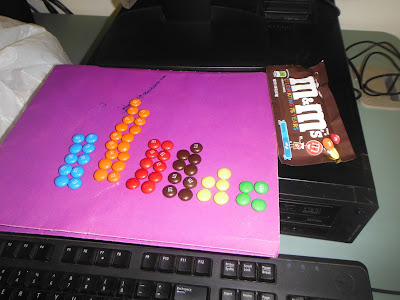 Another column chart. Some of the inter-color variation can be seen. 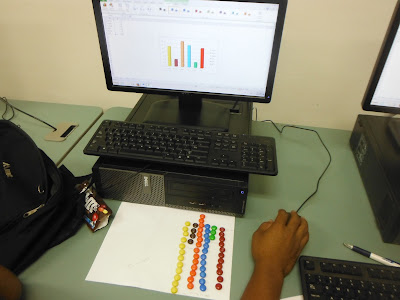 A chart that mirrors the layout of MMs. The students were making histograms and I had taught them nothing. Beautiful. 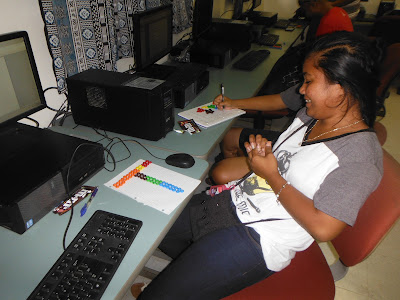 This student requested a photograph of her layout. A T-chart, perhaps a t-distribution?

In terms of anticipating the number of students, of 66 registered students, eight students were absent. 58 students attended, which is more than a single 36 pack case. Two students added the class in the afternoon and I provided them with a pack of MMs. Unintentionally I brought the mass balance down to the office, which proved useful for the two students who added the class Monday afternoon. Getting the correct Monday course court will always be a guessing game.

My plan was to have students who were absent on Monday and who showed up for class on Wednesday to be given "pseudo-MMs" to work with. With the college still in class add and drop mode through Wednesday, there were some students who decided that nothing important would happen on Monday and opted to skip the first day of class. The MM pseudo-packs were generated in Google Docs. 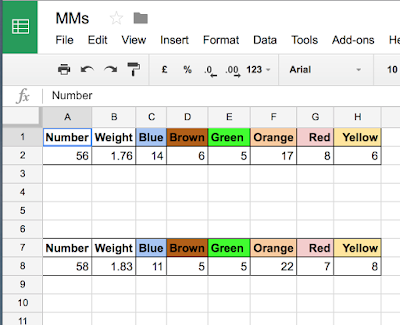 After working with students in the first section the pseudo-packs concept was dropped. Explaining the meaning of the slips of paper to those who had been absent on Monday was more complicated than pairing them up with students who had not obtained a partner on Monday, or who had lost a partner due to a partner dropping the class. Pseudo-packs may yet have some usefulness, but not this term.

Although this arrangement of real MMs on Monday and none on Wednesday will not have had an impact this term, should this activity be repeated in the terms to come, word will eventually filter out into the student community knowledge pool that MMs are available only to those who show up for the first day of class. Call it a first day attendance incentive policy.

Wednesday began with the video, "How to Avoid Death by PowerPoint" which answered the only question the students had about their presentation, "How many slides should we have?" For those unfamiliar with the presentation the answer is, "The problem has never been the number of slides but the number of objects per slide." The video teaches the students to have one message per slide, avoid the use of sentences on slides that one then reads to the audience (one can have sentences, but do not read them), use contrast and size to control where the viewer is looking, utilize dark backgrounds, and have no more than six objects on a slide.

By Wednesday morning some students had dropped the course, three had changed sections, and two had added the course. This left some students without partners. Where I could partnered students with new partners, with others I asked them to proceed solo. One student would add late Wednesday afternoon, he was excused from having to do the presentation on Friday. 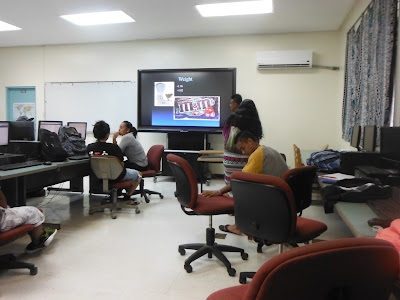 On what was effectively a zero knowledge start back on Monday, the Friday presentations went well. Students reported minimum, maximum, sample size, and averages. By identifying the most common color, the groups identified the mode without knowing the statistical name. Each group made a chart, usually a column or pie chart, but a couple groups opted for line charts. Some of the groups noted the differences in the number of MMs per bag, the differences in the color counts. One group even worked out the weight per MM and extrapolated a minimum number of MMs to achieve the bag label's 1.69 ounce rating. 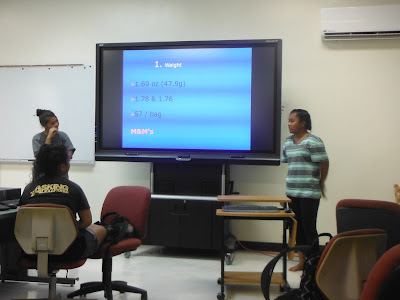 Being early in the term, some pairs were dysfunctional. In a couple instances a pair opted to present as soloists each with their own presentation. One student who seemed particularly confused read a history of MMs to the class. This was, however, an exception. By and large the pairs worked and presented together.

The presentations were marked using a rubric in Schoology.

The MM presentations will provide a solid foundation on which to built the terminology and concepts of basic statistics. The students have spent the week engaging with data, making decisions on how to report that data. The students have also had an opportunity to share their findings with their peers. The course remains a mix of presentations built on problem based learning/open data exploration and content delivered in a more traditional format.

My thanks to my division chair and the administration for their ongoing support for the course and for the curricular and methods changes being made as a part of engaging in recommended best practices and continuous improvement of the course. I am especially appreciative of the support for this particular activity. The request for funding for two cases of MMs was novel. This support allowed the course to start in a new way that was fun for the students. Beginnings are important, and a beginning in which statistics is fun helps set a positive tone for the course ahead.