August 21, 2016
This term I opened the laboratory with an expansion on the Dyson quote I have used in past terms. I added a quote from Galileo Galilei. The core idea is that nature is mathematical and the laws of nature are written in a mathematical language. For the Galileo quote I translated his use of "philosophy" into the modern understanding of that usage as "science." I decided to first give a go at the original quote as written by Galileo, here reproduced without the accent marks.

[Science] is written in that great book which ever lies before our eyes — I mean the universe — but we cannot understand it if we do not first learn the language and grasp the symbols, in which it is written. This book is written in the mathematical language,... – Galileo Galilei 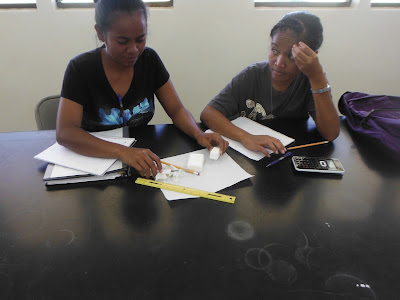 Tania prepares to measure her soap

Physicist Freeman Dyson, who studied subatomic physics in the 20th century, echoed Galileo, and I have read this quote for a number of terms. I refer back to this quote throughout the term.

The laboratory then proceeds to explore the mathematical relationship between the volume of a rectangular chunk of soap and the mass of the soap. Soap is ideal because the soap can easily be cut and carved into chunks. The laboratory uses both Dial and Ivory soap. Dial Basic is useful as the bar is already rectangular. 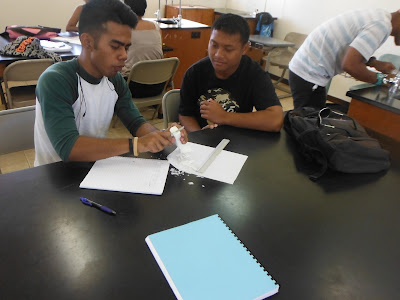 Twain and Stewart working on carving their soap

The data gathered leads to an xy scatter graph plot of the volume versus the mass. The slope of the linear trend line is the density of the soap. 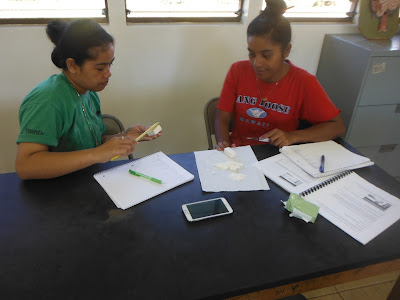 The data work is done up in the A204 computer laboratory to allow the use of spread sheet software. A beaker of water is also upstairs in the computer laboratory. The density of the Dial, if measured correctly, is greater than one gram per cubic centimeter. The density of the Ivory is less than one gram per cubic centimeter. Thus the Dial sinks and the Ivory floats. 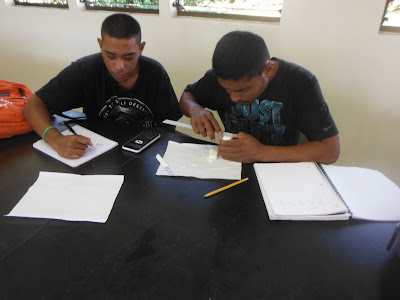 In the class I set this up by having the students first generate their trend lines. Then I ask them what the soap should do. Each term a number of students are unaware that Ivory soap floats, so the students working with the Ivory are puzzled by their slopes of less than one gram per cubic centimeter. I sometimes play into this by saying things like, "Well, soap sinks, but let's test the soap anyway." For those students, when the soap floats, they are amazed. Then I echo Dyson: you calculated how the soap should behave and when you tested the soap, the soap knew to do as you had calculated. 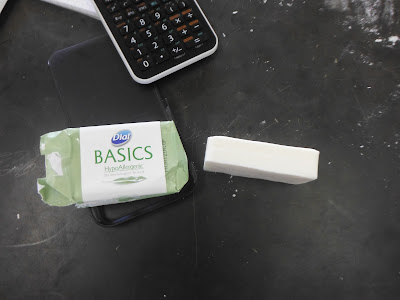 The Dial Basic proved problematic in the 8:00 section. The volumes came out too large and the densities came in at less than one. At 11:00 I had the students slice off the beveled faces to see if that would help. Getting Dial correct was tougher this term. 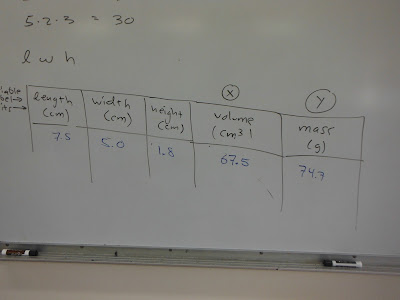 There were also difficulties with students measuring from the end of the rulers (zero is inset from the end). Friday I reviewed the concepts of the week, focusing on the soap knowing what to do based on the mathematics.