Laboratory fourteen in the penultimate week of the term provided a vehicle for assessing this course level outcome. The students were given a system that was unfamiliar to them and asked to determine the underlying mathematical models for the objects in the system. The specific system was the launch velocity versus the flight distance for a variety of flying objects. 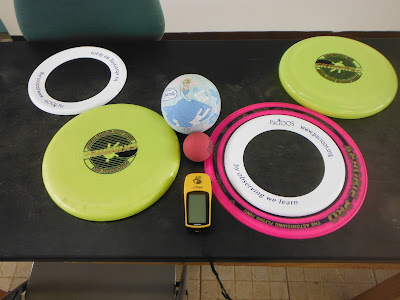 Data was gathered and then reported to the board. Students were to produce tables and xy scatter graphs for each object type. 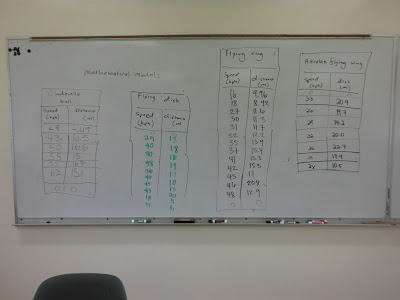 The laboratory reports were assessed to determine whether students properly recorded data in labelled tables, generated xy scatter graphs, made a decision on linearity and if deemed to be a linear relationship added linear trend lines to the graph, reported the slopes in their analysis, and discussed the results. Twelve of the thirteen students submitted this laboratory. 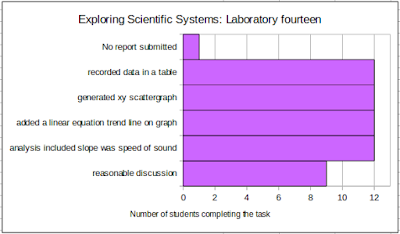 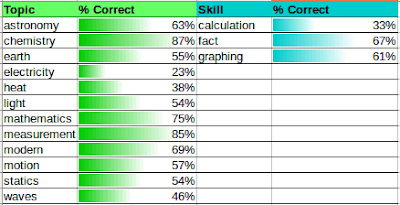 
The overall average for 13 students on these 58 items based on the item analysis was 64%, a considerable improvement from the spring 2016 success rate of 51% and a return to the 66% success rate seen on the fall 2015 final examination. 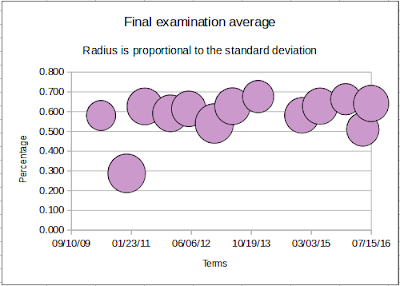 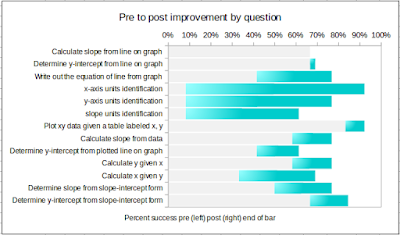 Of note is that on the very first question, a calculation of slope for a line that has a non-zero y-intercept, performance on the final examination was worse than on the pre-assessment. On the pre-assessment eight students answered correctly, on the final examination only five students answered correctly. This represented a drop of 28% which is not displayed on the chart above. On all other questions performance improved. 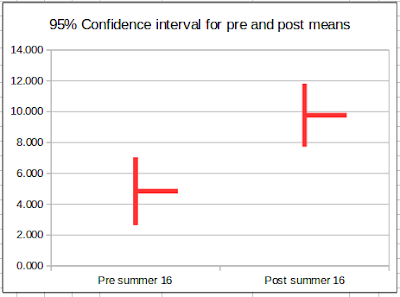 As reported above, student ability to include thoughtful discussion and interpretation of data supported by their quantitative evidence was demonstrated by nine students as measured by laboratory fourteen.

Inherent in supporting institutional learning outcome two, which course learning outcome four serves, is proper mechanics. Physical Science laboratory report marking rubrics at the national campus include evaluation of four broad metrics: syntax (grammar), vocabulary and spelling, organization, cohesion and coherence. Each of these four metrics is measured on a five point scale yielding a total possible of twenty points. In general, students enter the course with writing skills. Errors of tense and agreement tend to mirror areas in students' first language that do not have similar tense or agreement structures. All students in the class are working in English as a second language.

The brief six week duration of the summer session meant that up to three laboratory reports were due per week. The students in the course this summer generally started with fairly strong writing abilities and those abilities remained with them throughout the summer session. Thus there was little room for improvement against the existing rubrics. Coupled with the small sample size, significant improvement in writing mechanics could not be shown this summer.