July 18, 2016
MS 150 Introduction to Statistics has utilized an outline based in part on the 2007 Guidelines for Assessment and Instruction in Statistics Education (GAISE), the spring 2016 draft GAISE update, and the ongoing effort at the college to incorporate authentic assessment in courses. The three course level student learning outcomes currently guiding MS 150 Introduction to Statistics are:
The first two outcomes involve basic calculation capabilities of the students and are assessed via an item analysis of the final examination (original was a test inside Schoology.com). Thirty-nine students in two sections took the final examination. 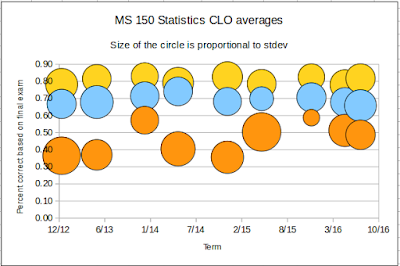 In the above chart the centers of the yellow topmost circles are located at the average success rate for the students on final examination questions under the first course learning outcome - basic single variable statistics. The chart reports results from 2012 to present. The radii are the standard deviations. The middle blue circles track performance under the second course level learning outcome, paired dependent data. The orange bottom-most circles track performance on the open data exploration and analysis.

Performance on the second course learning outcome, linear regression statistics, was measured by six questions on the final examination. Student performance on this section was 65.8%. The four year average is 69.2%. This success rate varies by 6%, the difference of -2.1% is not significant. Student success on linear regressions has remained lower than success rates on basic statistical calculations. The stability of these values suggests that increased success rates would be challenging to achieve.

Performance on the third course learning outcome, open data exploration and analysis, is not comparable term-on-term. The scoring system for the open data exploration section of the final examination varies term-on-term. Performance is always weaker on this open data exploration and analysis section than on the first two learning outcomes. Students perform strongly when asked to calculate a specific statistic, students struggle when raw data and open ended questions are posed about the data. The students responded to this section with a single essay question set up using Schoology. This one question was then marked by the instructor.

The 48.7% student success rate seen on the third learning outcome this term represents the average score. Of the 19 students who took the final examination, only one made a fully correct analysis of the data, measuring the means and running a test for a significance difference in those means. The open data exploration this term explored two samples where the optimal solution would have been to calculate the means and then test for a significant difference in the means.

In the data provided this term, the sample means were different but not significantly different at a five percent risk of a type I error. Anecdotally, the students have more difficulty failing to reject a difference in the means than rejecting a difference in the means. The students see any difference as being real, the idea that the variation can effectively eliminate the reality of the difference is difficult for them to grasp. Bear in mind that in this portion of the exam the students are presented with raw data and an open question, they are not told how to analyze the data to answer the question. 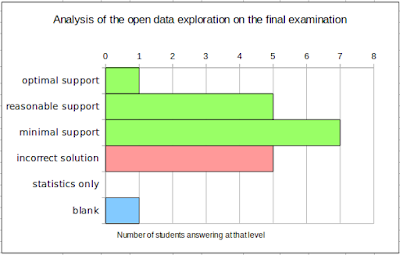 Five students did not attempt to utilize a measure of the middle to compare the samples. Some tried to cite differing maximum values as evidence of a difference. 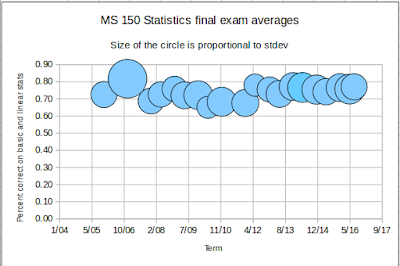 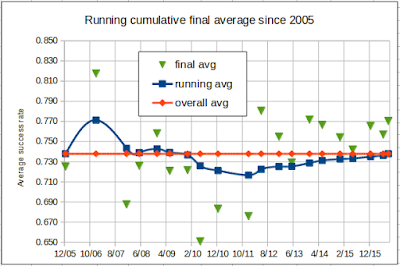 Note that the y-axis does not start at zero: exaggerated vertical scale

In general students who complete the course are able to successfully make basic statistical calculations on 74% of the questions posed. 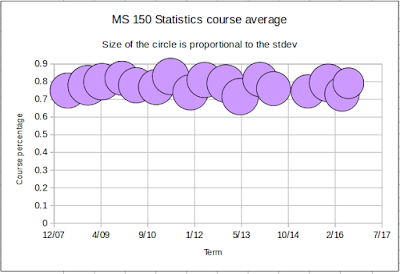 Course average over the past eight years

This term the open data exploration exercises were each capped off with a presentation rather than a quiz. Performance on the open data explorations was marked using rubrics. Each rubric consisted of five to seven criteria and generated twenty to twenty-eight points. Three to five criteria were content oriented, one focused on the presentation software, and the final criteria rated on the presentor.

The open data exploration assignments were structured as assignments in the Schoology learning management system. Students had to submit by midnight on the day prior to the presentation, the assignment locking system in Schoology permitted this functionality. 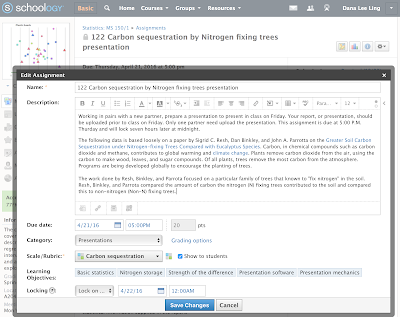 The average score on the four in-class presentations was 80.7%. During the previous term the average had been 80.6%. 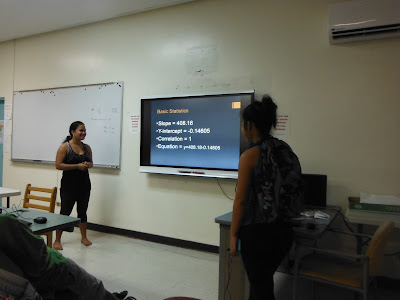 The presentations were downloaded as a batch using the download all functionality of Schoology.

An earlier article examined authentic assessment in the statistics course.

The item analysis of the twenty-seven final examination questions also provides insight on the success rate against the two general education program learning outcomes served by the course.

Overall performance remains stable in this mature but evolving course.