June 08, 2016
On Wednesday I returned to the prior day's assertion that the falling ball fell at an increasing, not constant, velocity. I explained that I wanted to directly show that the velocity was increasing and to explore the nature of that increase. I used the banana leaf marble ramp rig that I have used the past few terms.

The data gathered this term was:

As I started doing last academic year, I did not include nor graph the linear model. I did ask the class to predict the speed at a height of 10 cm, but when that did not come true, and 15 cm failed to be triple the actual, I dropped that line of inquiry. 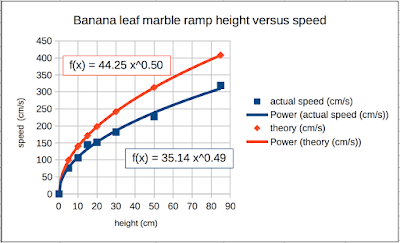 I obtained perhaps the closest exponent to a square root in the history of the demonstration. And the coefficient is just under the 37.4 value that is predicted when the rotational kinetic energy is also taken into account. Note that as per recent terms I did not work out the problem with the rotational kinetic energy term included. That adds a layer of mathematical complexity which obscures the equality I am trying to illustrate. 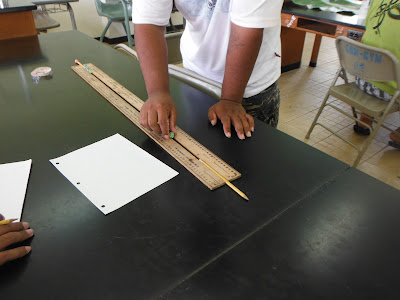 The meter sticks were still laying around the room from the morning banana leaf marble ramp demonstration when laboratory four started. Gino and John built their own marble ramp from them. 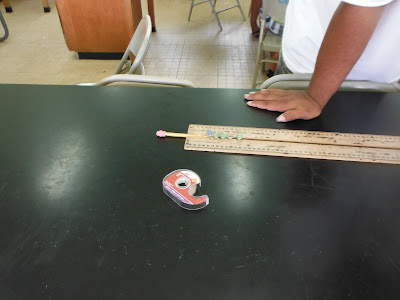 In laboratory four I posed seven questions on the board. I did not lead with any form of demonstration. 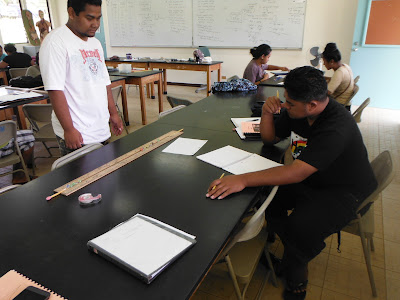 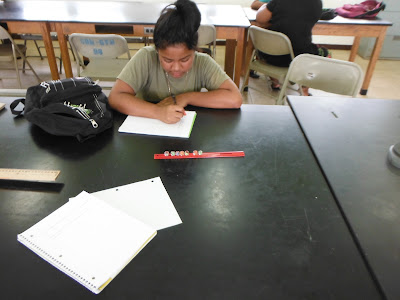 The students first explored the behavior of the marbles, and then each pair presented their findings to the rest of the class. 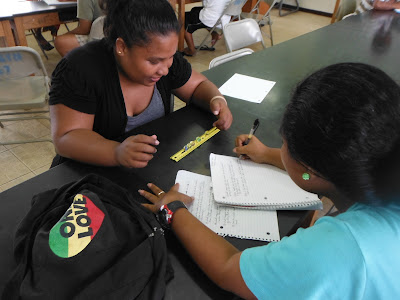 Marlinda and Marsha explore the behavior of the marbles

Duplicate findings were noted to be confirmatory of the theory. 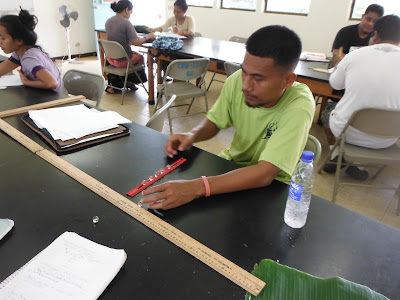 All of the groups concurred on the first three questions. One in, one out. Two in, two out. The number in equals the number out. 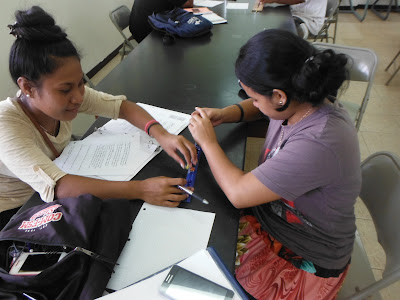 On the fourth question some groups found that the number out equaled the number in. One group found that six marbles rolled into a line of three left four on the ruler and seven were ejected. These were ejected in a six-one pattern on the two occasions I observed. 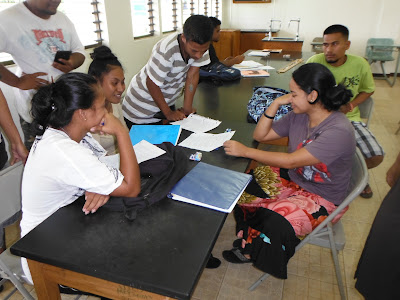 Marmelyn presents their results to the rest of the class: science is not science until it is communicated

Another group found that six rolled into five left six on the ruler while only five rolled off the ruler. 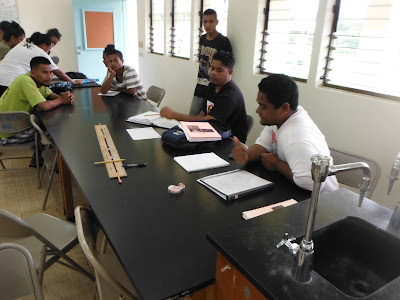 On the speed questions some said slow in, slow out. Other groups found slow in, none out. The whole system came to a halt if the inbound speed was sufficiently low. 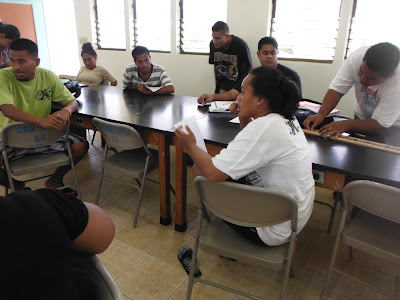 For the fast marbles in, some found that equal number went out fast. A couple groups noted that fast in meant all of the marbles would be cleared off of the track.

The class was evenly split on the seventh question, yes and no.

I wrapped by noting the agreement on the first three questions, and the split results on the final four. I explained that this is how science works. The theory of conservation was shown to be useful for answering three of the questions, but the other four appear to need modifications of the theory. I noted the impact of spin and pulled out a Newton's pendulum to show what happens when spin is removed from the equation.
physci