May 04, 2016
Years ago a researcher arrived on Pohnpei who I had been led to believe had expertise in tropical plants. Upon arrival, the researcher asked for a tour of the rather small if not completely pathetic ethnobotanical garden my class had been tinkering around in for a few years. I was excited by the chance to get come help in identifying plants I could not identify.

As we walked down to the garden we passed Terminalia catappa, our local dipwopw tree also known as a seaside almond. The researcher looked at the tree and gave some Latin binomial I did not recognize. I asked if maybe the tree was not Terminalia catappa, and the researcher agreed that the tree could be T. catappa. For the first few plants, plants I already knew well, the researcher was citing Latin-sounding names that were unconnected to the plants. When I would suggest the name I knew, the researcher would agree with words to the effect, "Oh, yes, of course."  Eventually the researcher fell silent. I already knew I could not trust the identification of the plants I did not know and I was fairly certain by this point that the names being used were simply fabricated. Why not simply say, "I do not know Pacific island tropicals"? I will never know. Their tenure here was brief, but I knew from that walk that their tenure would not be successful.

I also knew that this was the final for ethnobotany. A walk on campus naming the plants in Latin and the student's own local language, along with citing the use of the plant. A simply yet authentic examination of a student's ethnobotanical knowledge.

This term I took off from the classroom at 3:30 sharp and headed down past the Premna obtusifolia variant called oahr, past the Spathoglottis plicata and Falcataria moluccana. Down under the Pterocarpus indicus and on to the Ipomoea carnea and Clerodendrum inerma near the Magnifera indica trees. Only two students were on time and were tracking me, but by the time I headed down into the soccer field over half the class was trying to catch up to me. As I walked I named plants. I was not moving fast, the students were simply not on time today. Last day of classes, the last time slot of the spring 20165 term - 3:30 to 5:00 P.M. 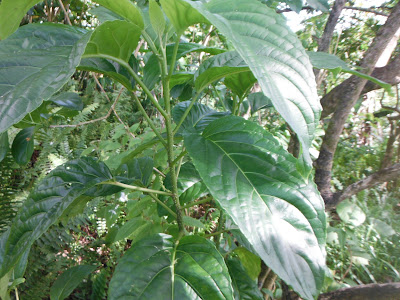 There are some plants, such as the above, that I am still learning to identify. I have no problem admitting to what I do not know. And I let the class know this as well. There is no shame in not knowing, only in pretending to know. 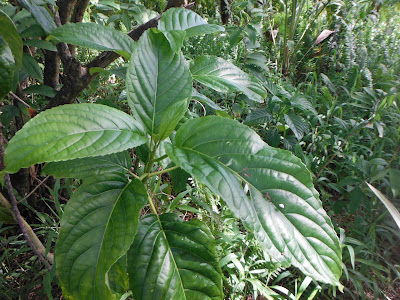 Eventually I will figure this one out! 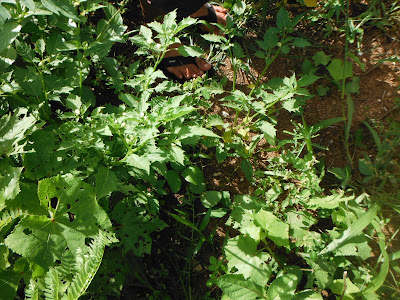 This plant reminds me of a plant that I knew as a Japanese lantern when I was young. 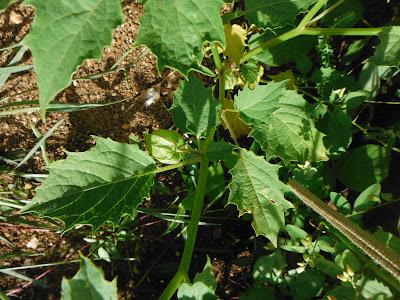 The seed is within the translucent pod. 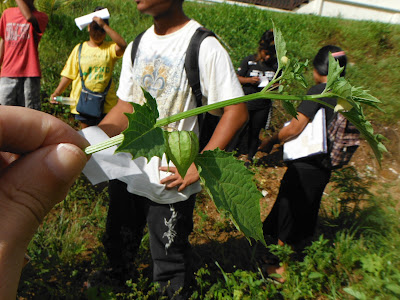 I told the class, here is another one I do not know. 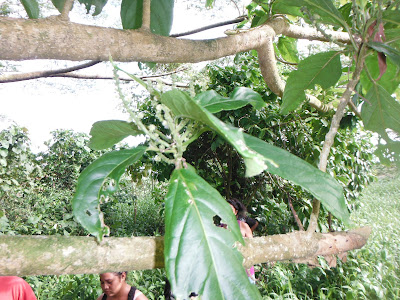 I have forgotten the name of this small tree and need to go back through my own resources for this one. 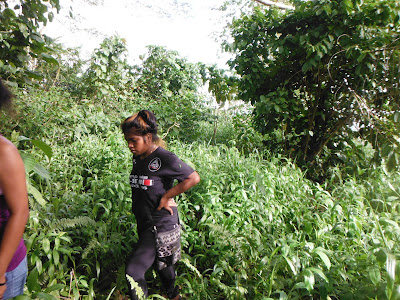 Angela amidst the Ischaemum polystachyum, reh padil. The tangle on the tree to the left is a Cananga odorata, seir en wai, tree with a Coffea arabica bush, a Piper nigrum vine growing on both. 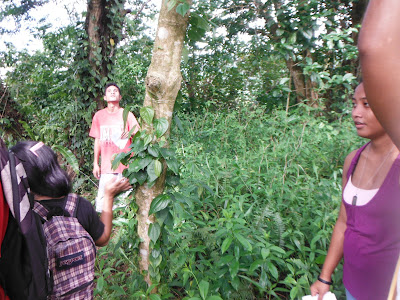 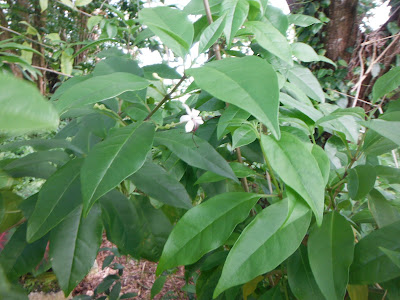 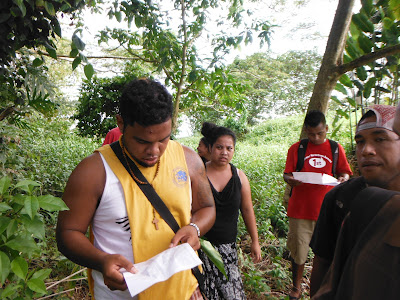 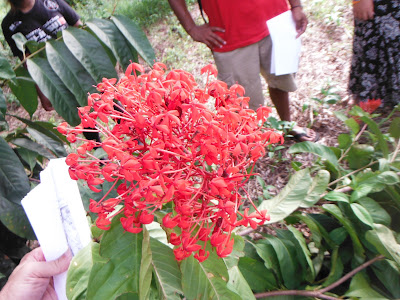 Ixora casei. A branch broke at some point, but the plant is very hardy. 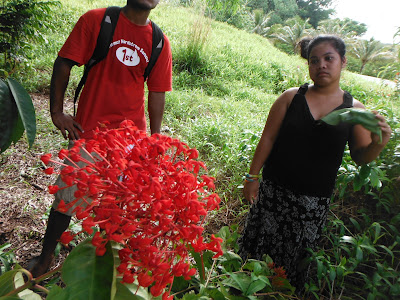 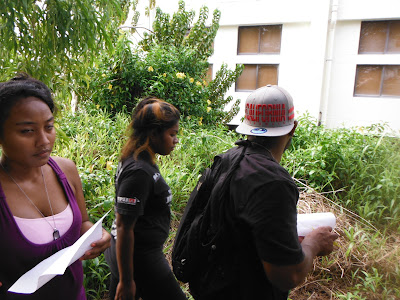 That a Psidium guajava in the middle background, Acacia auriculiformis on the left side. 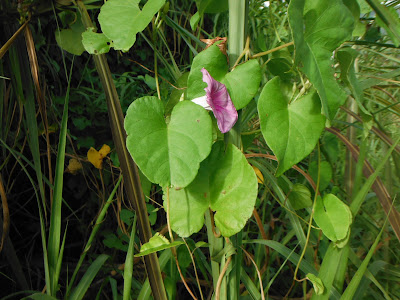 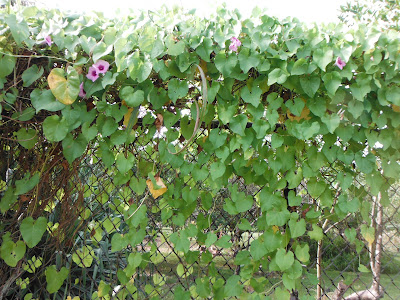 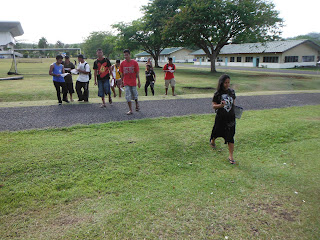 Sage leads the way back across campus. Sage has been an active and enthusiastic participant in the class. 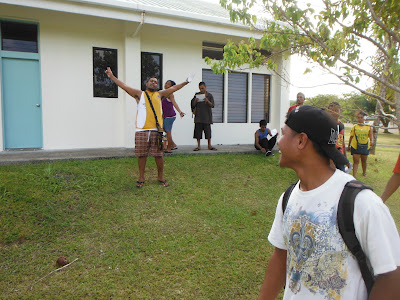 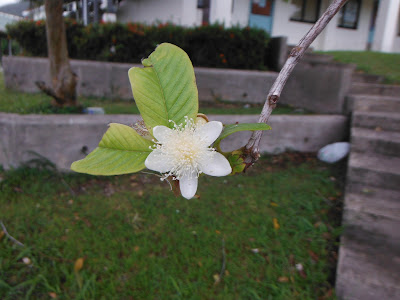 That's the flavor of the final. Can a student walk through their environment and name their plants and their uses - knowing also their local names.

The final the next day...

The final moved up from 16 to 20 identifications and included an expanded Latin name flora the students had access to during the final. 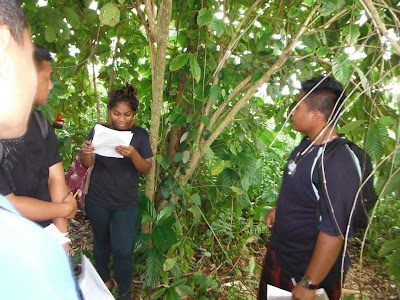 I skipped the Terminal catappa, Premna obtusifolia, and Psidium near the classroom and began with the ferns on the Magnifera indica down at the corner. I looped back behind the south faculty building, skipped the Ponapea ledermaniana, opting instead to pick up Piper methysticum and Ananas comosus down behind the A+ building. I was splitting the campus 7-7-7, roughly, in mind, but knowing the cap was twenty. Above Angela and Rogan are under Coffea arabica, there is also Piper nigrum in there which proved confusing for the students who misidentified it as Piper betel or Piper ponapense. 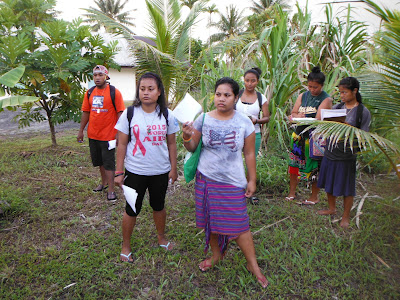 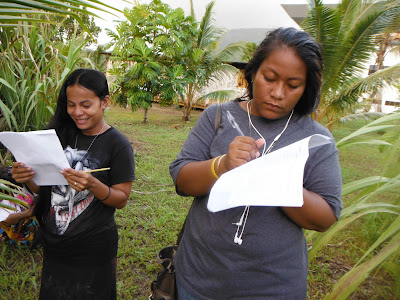 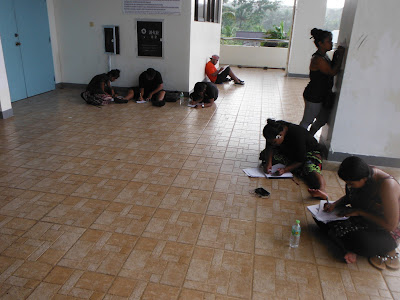 With rain threatening, the class moved to the porch of the FSM China Friendship Sports Center to work on rewrites.

One oversight: three students were stranded on campus post-final because they did not have taxi money and the school shuttle was not operating. Students might be reminded to bring taxi money in the event that they miss the last bus.