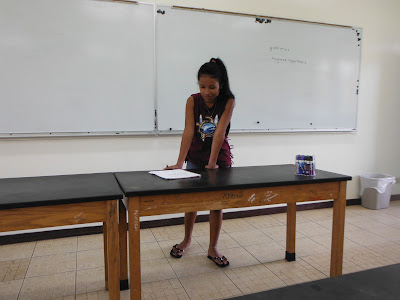 Cherlylinda presented the use of Morinda citrifolia flowers to produce eye drops for pink eye and irritated eyes. This is useful for sakau drinkers who tend to suffer from eye dryness. 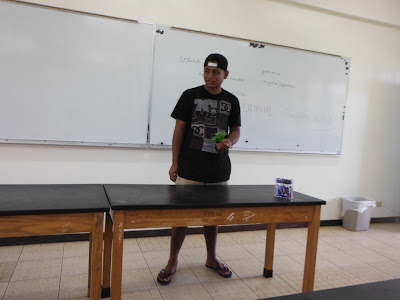 Darren covered the use of Premna obtusifolia in a steam bath for treatment of fever. 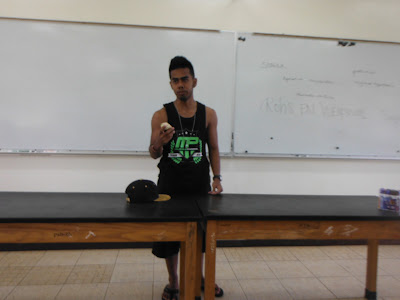 Twain spoke on the use of fermented ripe Morinda citrifolia fruit in the treatment of diabetes. The fermented juice of the ripe fruit is consumed as a drink. 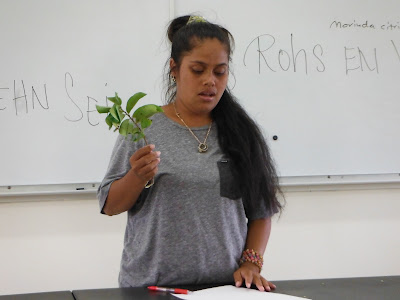 Sandra explained that tea made from Annona muricata (soursop) is also used as a preventative for diabetes. 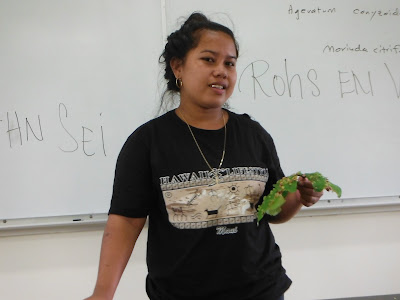 Rebseen briefed the class on the used of the masticated leaf of Syzygium, the Pohnpei water apple tree, to reduce external itching as a result of chicken pox. 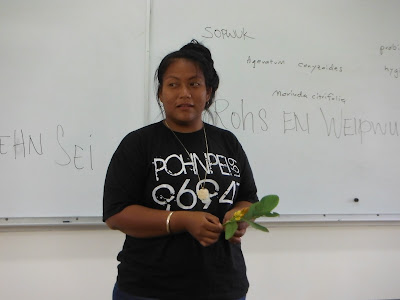 Casan-Jenae notes the use of Senna alata leaves to cure fungal white spots on the skin. 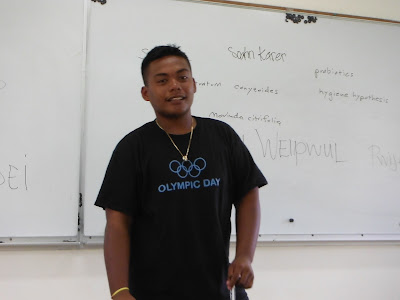 Rogan briefly noted the use of lime tree leaves to reduce coughing associated with a cold. 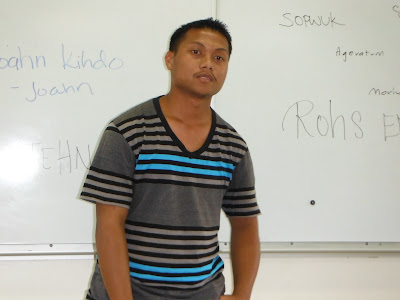 Stewart speaking on the use of Premna obtusifolia leaves to treat mpwos (skin boils). 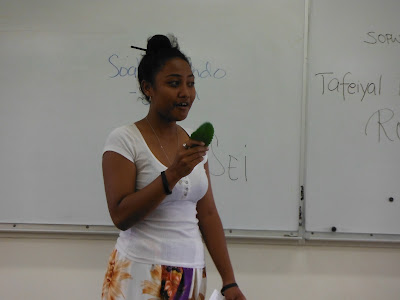 Michelle from the outer island of Yap brought in a kalanchoe leaf, tentatively Bryophyllum pinnatum, used in the external treatment of skin burns. She referred to the palnt as tafeiyal fisingeg. This is the first time I recall a treatment using kalanchoe. The family is known to have compounds that are cardiac glycosides which are extremely toxic. 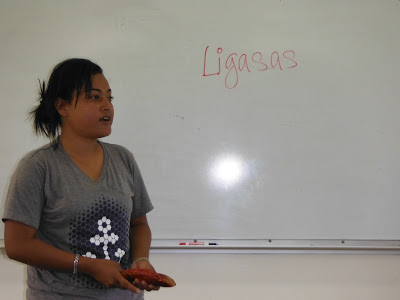 Ravelyn presented on ligasas, Terminalia catappa leaf. The fallen, red leaves are boiled to produce a tea which is added to bath water. The patient bathes in the infusion to treat skin scabs. 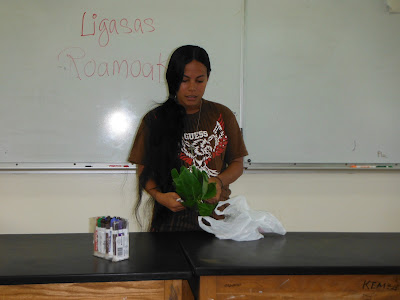 Sage shared the Mwoakillese uses of Scaevola taccada including the use of the ripe fruit to treat pink eye. 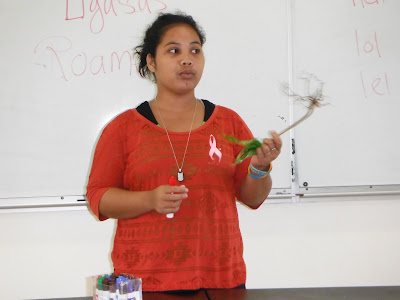 Sweena with the roots of a Morinda citrifolia tree. The scrapings of the yellow root are squeezed to produce a juice that treats stomach ulcers. 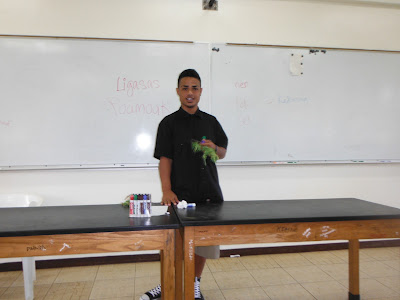 Chance speaking on the use of Ocimum sanctum (Ocimum tenuiflorum) in a steam bath for colds. 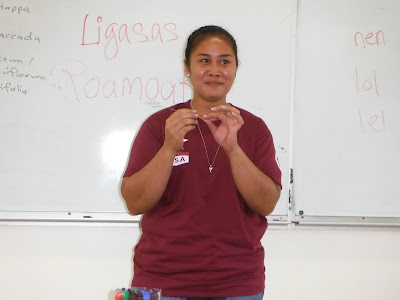 Helen brought in a grass locally called "sehdan" the stem of which is used to the clean dirt out of the eyes. 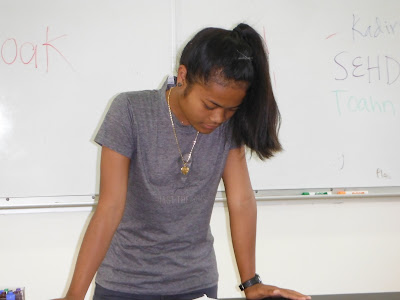 Sunet detailed a recipe for boiling a cup of Carica papaya leaves with a cup of green papaya fruit to produce a tea drunk three times a day to treat painful urination. 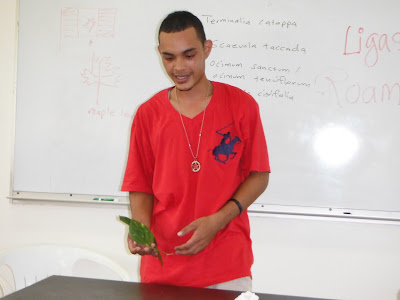 Randy, briefly, on the use of Piper ponapense to staunch bleeding. 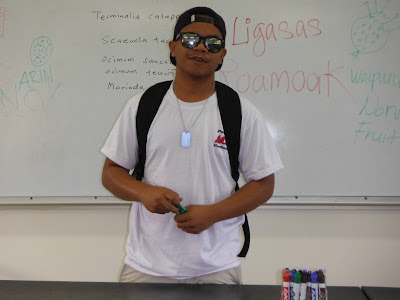 Norton on Morinda citrifolia uses in Faichuuk and Tol, Chuuk. 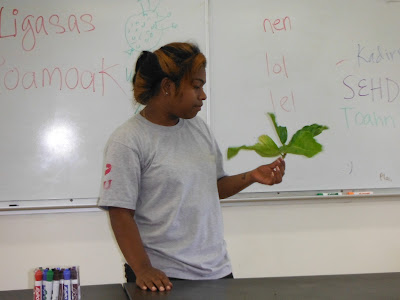 Angela spoke about shredding the baby leaves of Morinda citrifolia, adding to coconut oil, and applying to a baby's skin to reduce fever in the baby. 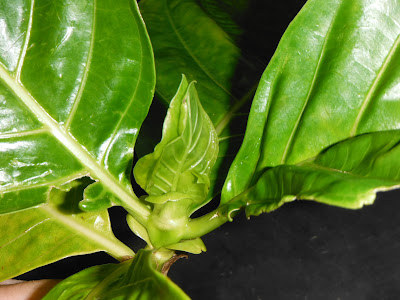 Detail view of the leaves being specified by Angela. 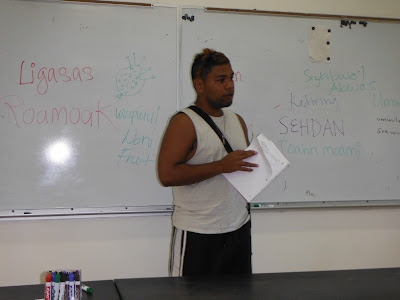 Dukay wrapped up by covering use of Psidium guajava leaves used to produce a bath infusion to clean a woman's private areas.
ethnobotany