January 22, 2016
I began with a moss plant from the east end of campus that had sporophytic spore capsules present, doing that presentation in front of A101. Then I took the class west to the old Community College of Micronesia seal in the lawn which is now sporting Nostoc on top of the cement seal. 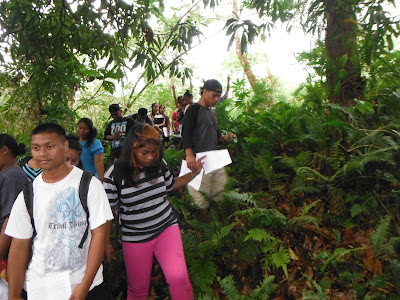 From there we walked west to the western field. I was caught off guard by the lack of Lycodiella cernua with cones, someone had harvested out essentially all of the L. cernua and Dicranopteris linearis for stage decorations. Time to find a new location with specimens. 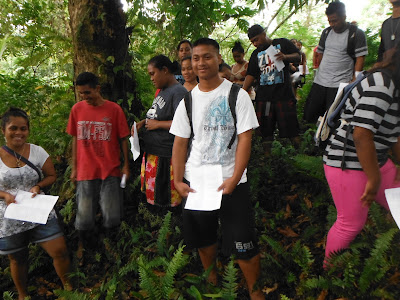 In a positive development there are now more ferns than ever at the top of the hill, including a new Angiopteris evecta. The many Sphaeropteris nigricans atop the hill now means that the only fern in the valley is the Antrophyum callifolium. With one student pregnant and all other ferns present atop the ridge, I chose not to descend into the valley.

There is now both an Asplenium laserpitiifolium and another fern that is similar atop the ridge, leaving me confused as to which is really which. I could not find sori during this brief excursion, sot that will have wait for another trip. The Huperzia phlegmaria has also been hit hard out there, but that is to be expected. Some remains high on the back side of the one mango tree. Oddly enough Microsorum scolopendria is vanishing. There are some better specimens in the potters on the front of the gym. M. scolopendria should be added to walk out to the valley, along with whatever other ferns can be found. The lack of a need to descend into the valley means that more time can be spent en route.
ethnobotany