December 03, 2015
Laboratory fifteen in physical science has the intent of wrapping up the term, expanding the students conception of what constitutes a mathematical model of a physical system, and having some fun. Daniel Kahneman in Thinking, Fast and Slow noted that the remembering mind rates experiences using a peak-end rule. We remember the best moment and the final moments of an experience when we reflect back on that experience. Although I had not known this particular fact when I designed laboratory 15 five years ago, I had always shared George M. Cohan's belief that one should "always leave them laughing when you say goodbye. I want the students to have positive affective domain responses to science, and ensuring the end experience is fun has an impact on those perceptions.

In the past I framed laboratory fifteen as a exposure to an alternative mathematical model that exists outside of the traditional mathematics "stack" of arithmetic, algebra, geometry, trigonometry, calculus, differential equations, and on up into advanced mathematics courses. I put the stack on the board and then introduced site swap notation. 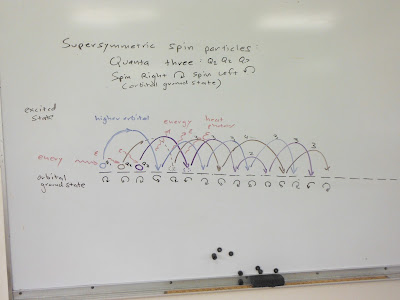 Last summer I opted to start by simply putting an abstract notation on the board and speaking about the notation purely abstractly. I chose to do this again this fall as I think there is a more important point to be made. I make no reference to juggling or balls. The diagram above gives one a flavour of the language I use. Videos the class has seen have exposed them to words such as supersymmetric particles, and I spoke about spin during the unit on atomic orbitals. I spoke of particles being kicked up to an excited state and falling back to a ground spin state. When I was done, I asked if the students understood. A few were simply silent. In the eight o'clock class three nodded yes and one said yes. At 11:00 one student even went so far as to say they understood the system and how to use the system.  Only one student at 8:00 and one at 11:00 indicated that they did not understand and were confused. The student at 11:00 actually made an exclamation of non-understanding, but quieted down when others nodded that they did understand. In both sections when I asked if there were any questions, no one had any questions.

I asked the class which they learned first back in the beginnings of school - math or science. In both sections the students noted that they learned math first, science later.

Then I laid out what the system really meant, that the system was a site swap diagram for juggling. I carefully showed them how the diagram actually worked.  After demonstrations and explanations I asserted that science should always precede mathematics. The abstract must follow the concrete. Algebra without the underpinnings of density, rolling balls, pulleys, meters per arc minute, speed of sound, apparent depth - without linear systems - does not make any sense. All of the "real world" examples in the homework sets do not make what is abstract not abstract. 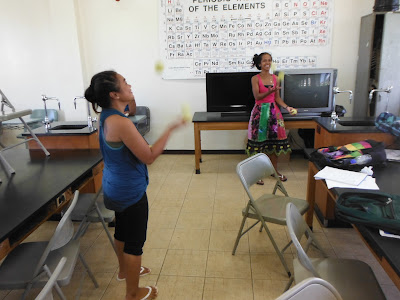 After the lecture I invite the students to try to master a 3. Some tackle the 51. No one attempted the 342, not so far as I saw. 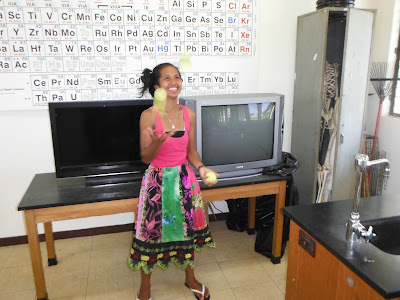 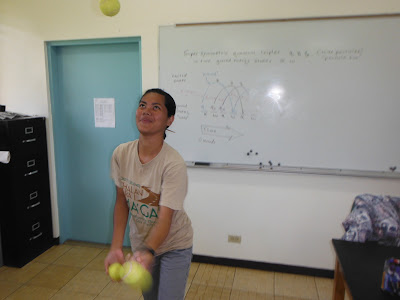 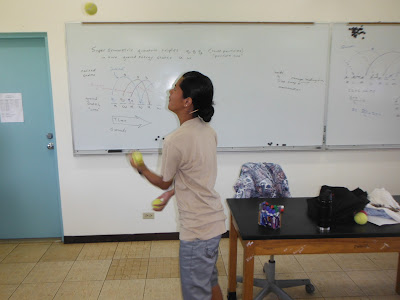 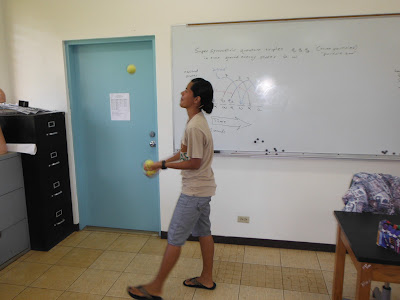 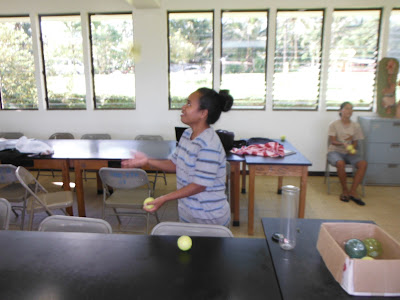 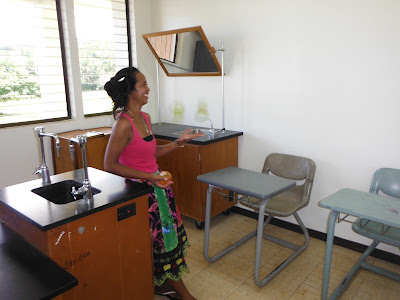 Callany with the space balls 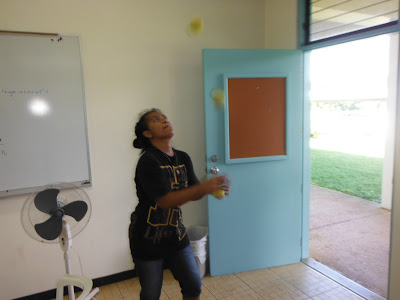 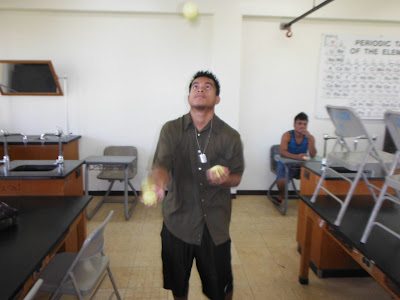 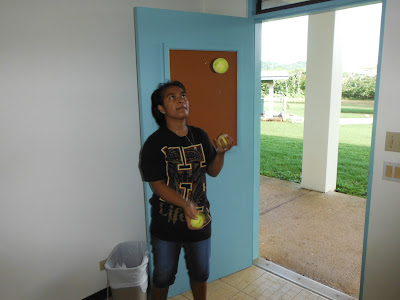 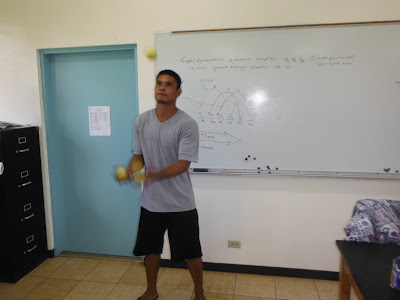 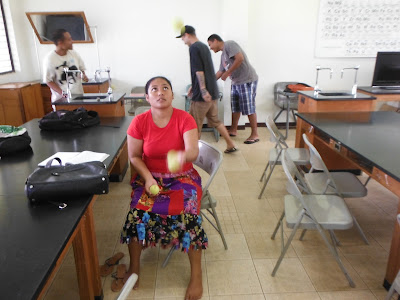 Dalynda with three, she would also demonstrate a four ball multiplex. Dalynda Park, as with other students who have multiplexed in the past, is from outer islands 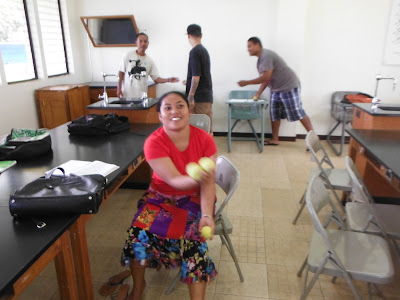 A multiplex catch by Dalynda 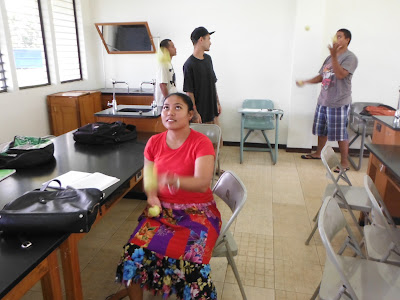 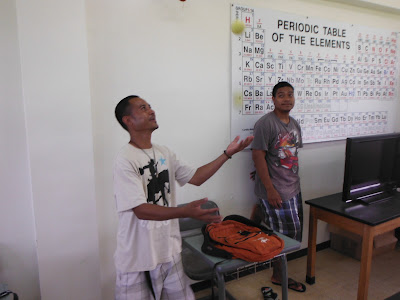 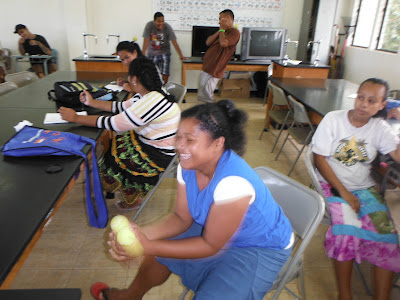 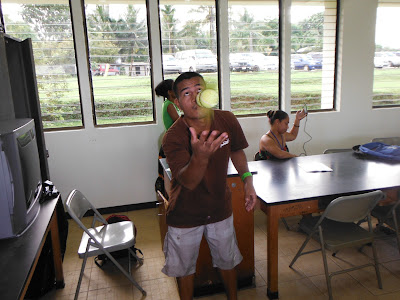 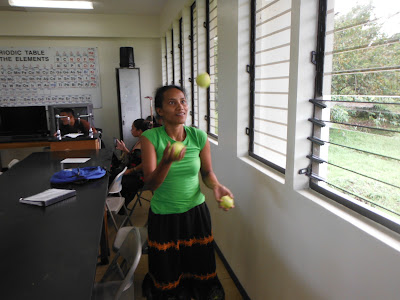 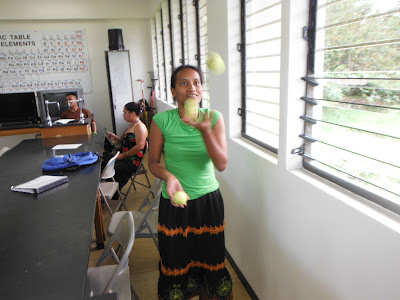