Laboratory fourteen in the penultimate week of the term provided a vehicle for assessing this course level outcome. The students were given a system to explore and questions to answer. The students were provided with flying disks and asked to determine whether a mathematical relationship exists between the launch velocity and the flight distance. If a relationship is found to exist, is the relationship linear? If the relationship is linear, then what is the equation for distance given a launch velocity? The disks were thrown only horizontally. Launch speeds were obtained with a small sports radar gun. 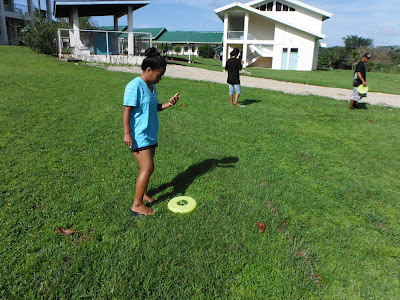 Marsha measures the flight distance for a flying disk

The laboratory reports were assessed to determine whether students properly recorded data in a labeled table, generated an xy scatter graph, made a determination as to whether a mathematical relationship existed, added an appropriate trend line, reported the slope in their analysis, and then discussed their analysis and results in a reasonably meaningful manner.

Twenty-seven students recorded their data in a properly labeled table and went on to generate a labeled xy scattergraph. While only 13 students made explicit mention of the nature of the mathematical relationship, the data was generally linear and 23 students added a linear trend line without specifically stating that the data was linear.

An explanation in the class prior to the lab noted that a non-flying object launched horizontally should travel a distance d = velocity × time where the time is a constant equal to the fall time of the object from the launch height. A launch just above a meter off the ground should produce a linear relationship for distance traveled with a slope around 0.5 seconds. That may sound strange, but bear in mind the x-axis is launch velocity in meters per second, the y-axis is distance in meters.

Twenty-eight items on the 35 item final examination asked students to define and explain concepts, theories, and laws in physical science. The average for thrity students on these 28 items was 66.4%. While summer term 2014 saw a success rate of 80% for eleven summer students, summer term is unique. For many summer students physical science is their only class, and the class meets daily. The fall success rate of 66.4% on this material is in line with the 61% success rate seen in spring 2015  and the 54% success rate fall 2014. The increase should note be seen as significant as the 54% and 61% success rates were based on an item analysis at the subquestion level. Fall 2015 there were 87 subquestions, many of the 35 questions had multiple parts. To facilitate analysis, item analysis was done at the question level, not subquestion level. Questions where the subquestions were answered predominantly correctly were deemed correct. If only a single subsquestion were missed, or if the subquestions were not deemed substantive to demonstrating understanding of the underlying material, then these questions were still counted as being substantively correct. This would inflate the success rate and explains the uptick in performance.

While the laboratory fourteen assessment above provides some data on this course learning outcome, this outcome supports the general education program learning outcome "3.2 Present and interpret numeric information in graphic forms." With this focus in mind, a pretest and post-test was included in the course. The post-test was embedded in the final examination. The pretest data fall 2015 was lost in a corruption of a synchronization with a cloud storage service. Performance on the pretest had been very weak.


SC 130 Physical Science includes a focus on the mathematical models that underlie physical science systems. Laboratories one, two, three, five, seven, nine, eleven, twelve, and fourteen have linear relationships. A number of assignments in the course also have linear relationships. The students also encounter a quadratic relationship in laboratory three. A plot of height versus velocity generates a power relationship, specifically a square root relationship. By the end of the course students have repeatedly worked with linear relations. One relationship at a time, not "problems one to thirty even problems only." Every equation is built from data that the students have gathered. From the concrete to the abstract, repeated throughout the term, providing cognitive hooks on which to "hang" their mathematical learning. 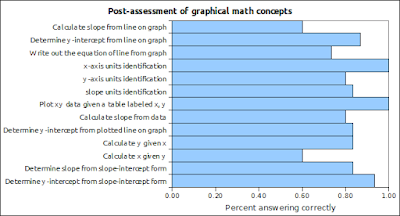 For the majority of the questions, more than 70% of the students scored above 70%. The following table replicates the data graphed above.

On the 13 questions, a 70% success rate would have been a score of 9.1 correctly answered problems. 75% of the students answered nine or more problems correctly, and half of the thirty student class answered 11 or more correctly on the post-test. 25% answered all 13 correctly. Student performance on the post-test questions was strong. 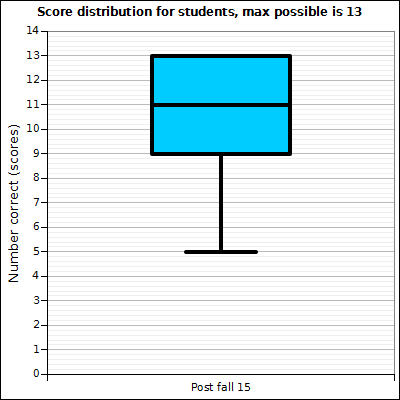 As reported above, student ability to include thoughtful discussion and interpretation of data supported by their quantitative evidence was by only six students as measured by laboratory fourteen.

Inherent in supporting institutional learning outcome two, which course learning outcome four serves, is proper mechanics. Physcial Science laboratory report marking rubrics at the national campus include evaluation of four broad metrics: syntax (grammar), vocabulary and spelling, organization, cohesion and coherence. Each of these four metrics is measured on a five point scale yielding a total possible of twenty points. In general, students enter the course with writing skills. Errors of tense and agreement tend to mirror areas in students' first language that do not have similar tense or agreement structures. All students in the class are working in English as a second language.

In general there is no significant change in mechanics measurable from laboratory one to laboratory fourteen. The complications are that the sample size is small and scores on the first laboratory report are generally high for most students. There is little room for improvement for many students. Only a few students have serious problems with mechanics, and sample size prevents drawing significant conclusions. Some students report orally that the class has helped with their writing skills, but this is anecdotal only.

Overall scores on laboratory fourteen indicate that strong student performances. There laboratory was scored against a 61 point rubric with 25 points in document format, grammar, vocabulary, organization, and cohesion. Writing metrics were fully 41% of the points. A reasonable writing score would have placed a paper at 51 points (83.6%).  As seen in the chart below, on the order of 75% of the students performed above this level on the final laboratory report. 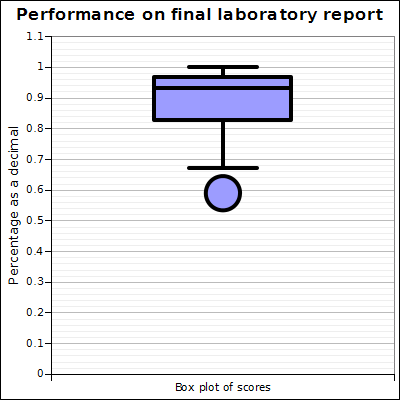 Learning has occurred for all four outcomes. Areas of potential improvement have been identified. The item analysis of the final examination also provides detailed insights of use primarily to the instructor. Specific topics and student mastery of those topics is included in the item analysis. The following table image shows topic, subtopic, skill, and the number of students (n = 30) who answered that question correctly. This data can be analyzed by topic, subtopic, or skill to provide other insights to strengths and weaknesses which can then be used to adjust curriculum for future terms.