Pseudo-PowerPoint from the back of a RipStik

September 19, 2015
A belated convocation was going to take out Wednesday the 16th, so I decided to move Newton's laws to Monday. Liberation Day had already wiped out the Friday quiz on the 11th, thus Monday the 14th had no quiz to cover. I opted to hold class in front of the south faculty building. I promised the class that in my quest to diversify my use of methods in the class, I would give a PowerPoint presentation. I mounted my RipStik and pulled out my PowerPoint cards. Which were hand scrawled in marker on eight and half by eleven sheets of high weight paper. I displayed the cards as I rode up and down in front of the class on the RipStik.

I used the RipStik to demonstrate the laws as I covered them, borrowing a post as an example of an external force. I also showed that internal forces did not affect my velocity - pulling my own hand could not make me faster. The external force led naturally to the second law, and the collisions helped illustrate the third law. No pictures were taken, but the layout is similar to that seen in the following image. 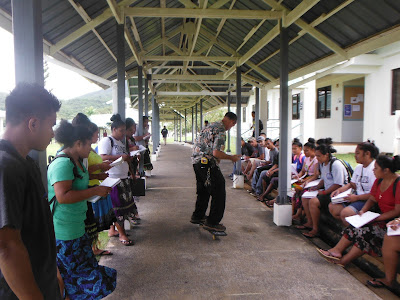 On an island where the power goes off with great regularity, my alternative PowerPoint was immune to electrical interruption.
physci