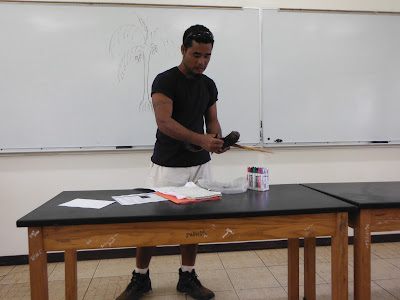 Fredson Ardos covered the use of the husk of an old coconut to disinfect wounds and cuts. 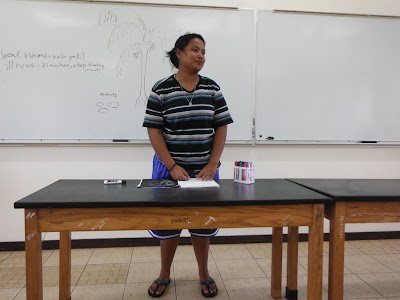 Erika Billen descibed the use of madeu, Pohnpei cinnamon tree, to treat back pain. The cinnamon tea is consumed hot to treat unspecified back pain. 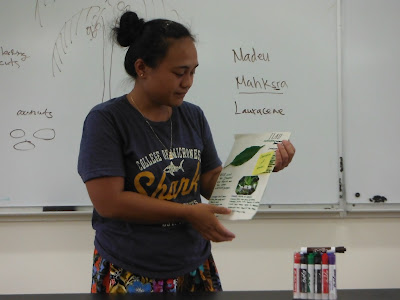 Michelle David explained the use of ilau, Clerodendrum inerme, for cough and fever. Four to eight leaves are rubbed in the hands, then the leaves are squeezed to produce a liquid. Four orally administered drops. 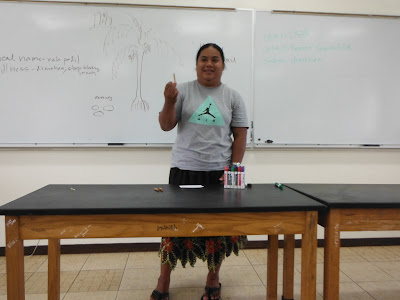 Sylvia Johnson noted the use of the growing tip of a red-nutted coconut tree root combined with heart of the coconut tree to treat earache. 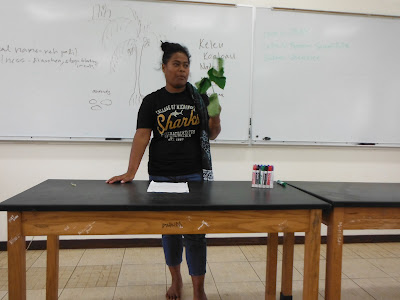 Junia Alanzo presented an unusual use of the vegetative end of sakau. The leaf shoot is combined with coconut juice to ease nervousness. To the best of my recollection this is the first I have heard of the consumption of the leaves, in this case the shoots. The kavalactones are primarily in the roots. Whether the upper part of the plant is safe for consumption is, as far as I know, an open question. 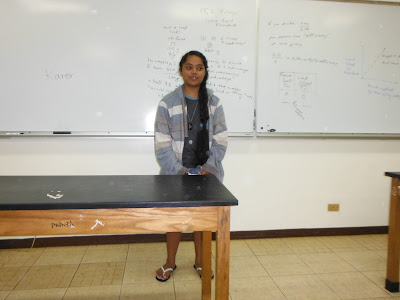 Lorryann Martin described the use of karer, key lime, leaves in an umwulap to treat fever, coughing, congested sinuses. 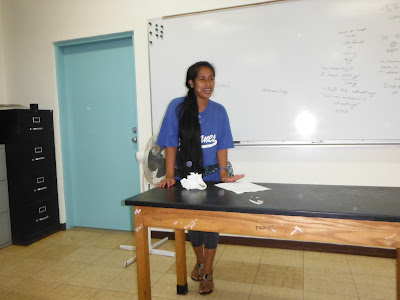 Shanon Jonathan explained the use of the juice from weipwul flowers for the treatment of pink eye. 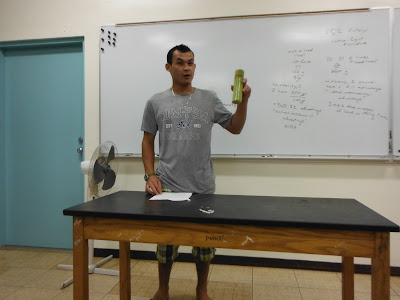 Fritz Mihkel used the core of an already flowered banana stalk to produce cough medicine. The center of the core is effectively drilled out to allow the liquid in the false stem to collect. The core has to be already flowered, or the banana will regrow into the center hole that was drilled out. 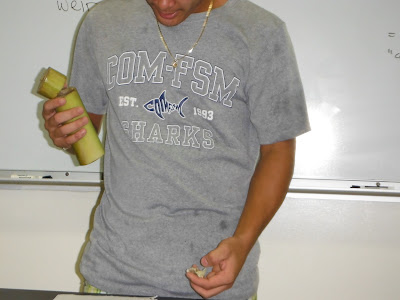 The gathered liquid is then drunk to relieve coughing. 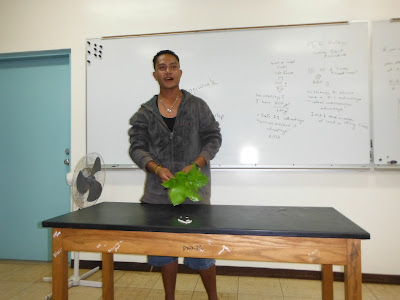 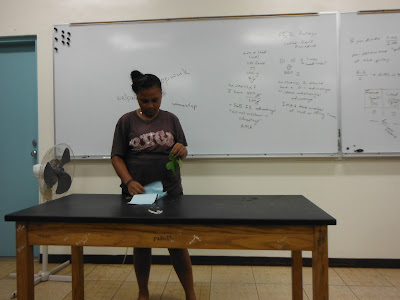 Merany Pelep covered the use of tehn likehdou (Ipomoea mauritiana) for treatment of cervical cancer. 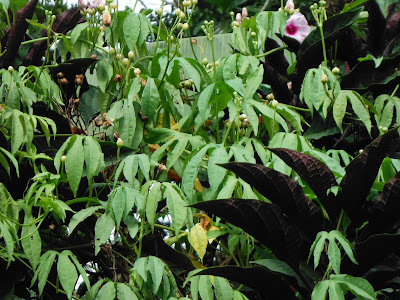 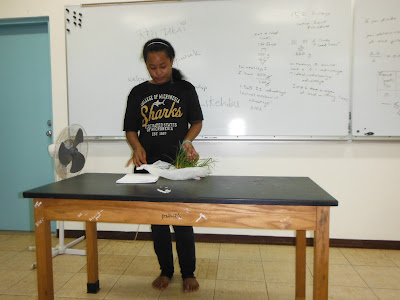 Annalissa Rafael explained the use of the reh takai, a grass, in the treatment of sore throat. Apparently the leaves are used, possibly the white core stems, are crushed and the juice squeezed into coconut juice. Drink for sore throat. 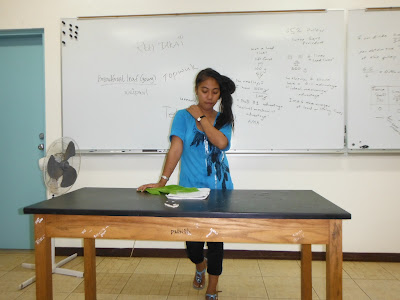 Starcy Rodriguez spoke on treating a baby crying before sundown being a sign of spirit sickness in the baby. A spirit may be bothering the baby. A five lobed breadfruit leaf can be used, with incantations, to chase the spirit away. If the baby has developed diarrhea, then the issue might be a father who is being unfaithful to the mother. A medicine can be prepared from the leaf and coconut juice. A similar treatment exists in the rare instance that the mother is the unfaithful one. Finally, a high titled man can use the five lobed leaf along with a song to enchant a young woman and attract her interest. 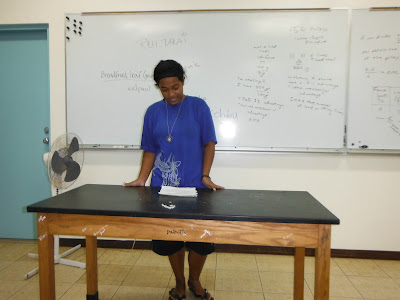 Aiesha-Laine Santos presented the use of four young guava leaves as an anti-diarrhoeal. 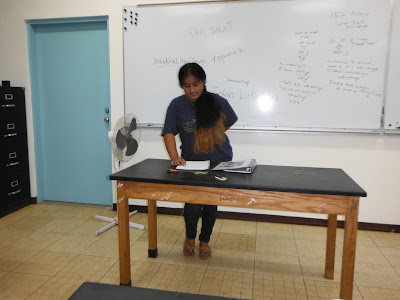 Alyssa Washington explained that tea from wan rose en keleu (flower of hibiscus tiliaceus) can be gargled to treat toothache. 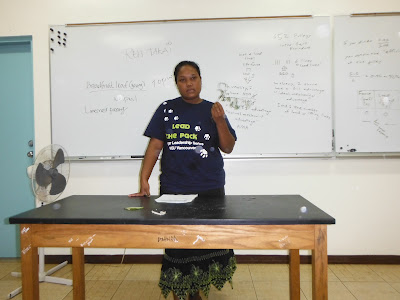 Jeanie Bartolome explained that Mimosa pudica can be used to treat shortness of breath. Jeanie referred to M. pudica as "limemeirpwong" (lady who sleeps at night), but there seems to be confusion between Phyllanthus amarus, which also "sleeps" at night, and Mimosa pudica. P. amarus is used to treat shortness of breath, asthma, and respiratory distress. P. amarus is the more often used medicinal plant. My sense is that at some point the behavior of M. pudica led to the plant also being called limemeirpwong and some of the medicines which had been based on P. amarus were "transferred" with the name. M. pudica also has the name limemeirkelik, suggesting that limemeirpwong is a secondary appellation. 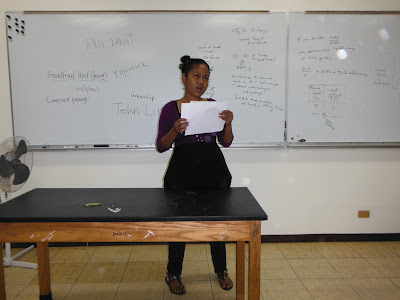 Allison Fugog gave an overview of the many uses of noni tree on Yap. One of the uses was that of the root of young noni tree to treat cavities. A young seedling is pulled and root removed, washed. Secondary roots are removed. The root is washed until yellow. The the root is treated with mineral lime (commonly carried by betelnut chewers) until the root just turns orange. Just a little lime is used. The orange root is then placed in the cavity.
ethnobotany