Mathematics only in a context

July 08, 2015
I tried a slight twist on the last laboratory of the summer session. I walked into the room empty handed and then began an abstract lecture on site swap mathematics.

I deliberately avoided placing the notation into a context, introducing the topic as an abstract system of symbolic notation and manipulation. Note that I labeled the sites as alpha and beta, referring only to objects by color names. "The purple will move three sites down from alpha to beta, then another three sites from beta back to alpha." 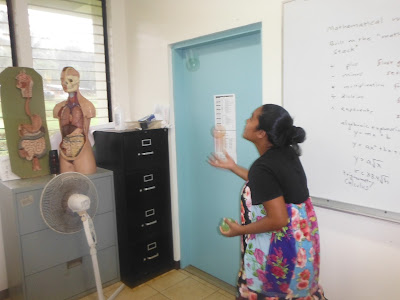 I initially put up a 3 and then showed that one could swap two site to yield the 42 seen in the middle of the pattern above. I noted that sums and averages were invariant under a site swap. The students dutifully took notes and worked on drawing the diagram. 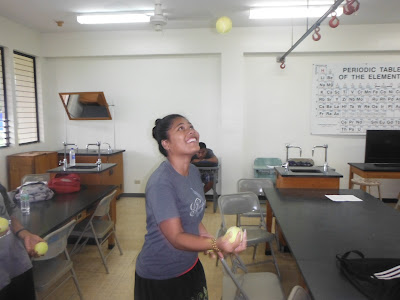 With the above on the board, I went around the room to orally check for understanding. Seven of the fourteen students smiled and nodded yes when I asked if they felt they basically understood the site swap system. Three were non-committal, but a fourth student simply said, "That does not make any sense. Too confusing." A recheck found that the initial three non-commits were now willing to admit that they had no idea what the markings on the board meant. 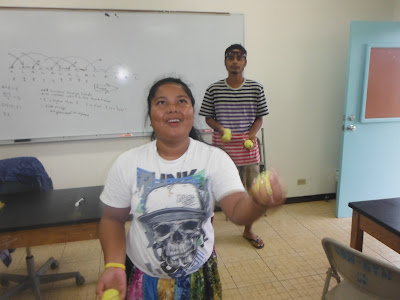 Part of the above effect is something I have come to see as part of the way of interacting out here - smile, nod, shake your head in agreement, even if you have no idea what the other person is really trying to say or talking about. 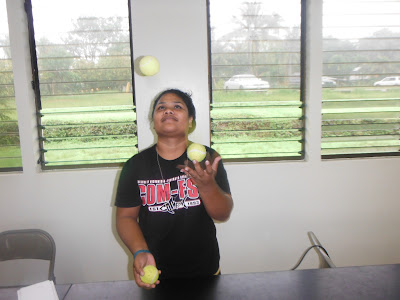 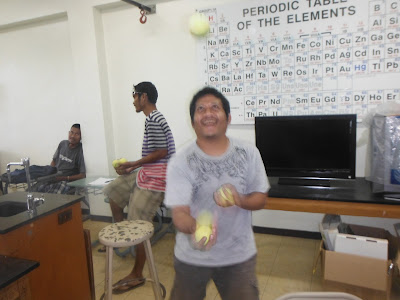 I then revealed the context within which site swap mathematics arises, that the alphas and betas are right and left hands, landing sites for juggled balls, and then illustrated the meaning of the system. The notation now had a context, a meaning. While still confusing, the idea of a site swap could now be physically demonstrated.

The class wraps up with the students attempting to learn a 3, and those who master a 3 attempting a 342 site swap. Juggling is not useful per se from a survival perspective, I would not argue mathematics has to be useful, only that math should be taught from within the contexts in which mathematics is useful.