Laboratory fourteen in the penultimate week of the term provided a vehicle for assessing this course level outcome. The students were given a system to explore and two questions to answer. The students were provided with string and weight pendulums and asked to determine the relationship between the length and the period. The class started in the classroom working with lengths from 25 cm to 150 cm. 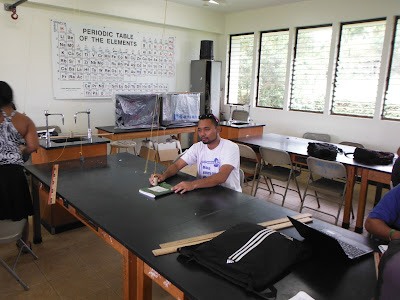 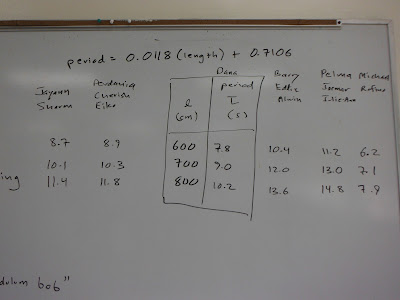 After posting predictions on the board, the class walked down to the gym where a 700 cm pendulum can be swung. The predictions were up around 10 seconds, but the actual period was around 5 seconds (4.85 seconds and 5.38 seconds were the recorded values). The data did not fit the model. The students were then instructed to write up the laboratory taking into account the errant prediction.

The laboratory reports were assessed to determine whether students properly recorded data in a labeled table, generated an xy scatter graph, added a regression equation to their data, made a determination as to the non-linear nature of the relationship, and then discussed their analysis and results in a reasonably meaningful manner.

Student performance was assessed using a simple binary rubric based on the metrics noted above. Ten of the fourteen students completed this term end laboratory. 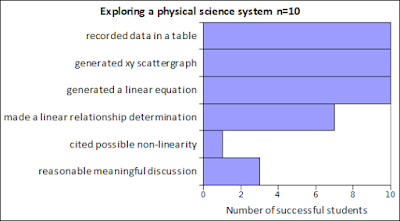 The ten students demonstrated mastery the core mechanics of the laboratory report style used in SC 130 Physical Science. The students gathered data and reported results in a properly formatted and labeled table. The students used spreadsheet software to generate xy scatter graphs also properly formatted and labeled. All of the students added a trend line to the graph, but only seven specifically discussed their choice of mathematical relationship. All ten students chose a linear regression. Only a single student noted that the data was "not really linear." That one student went on to note that there existed the possibility of the "math model used being wrong." 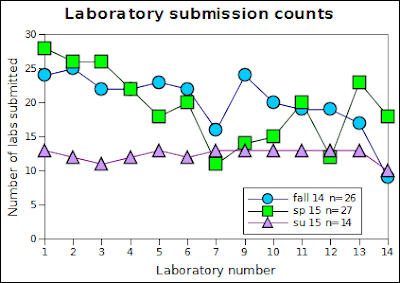 Summer term is short and intense. Only two students were taking classes other than physical science, thus this was the only course for the majority of the students. These factors may have contributed to the turn-in rate remaining high during the summer session.

Twenty-nine items on the 66 item final examination asked students to define and explain concepts, theories, and laws in physical science. The average for fourteen students on these 29 items was 80%. This is significantly higher than the 61% success rate seen in the spring and the 54% success rate fall 2014. The strong performance is also likely a unique effect of the brevity and intensity of the summer term.

While the laboratory fourteen assessment above provides some data on this course learning outcome, this outcome supports the general education program learning outcome "3.2 Present and interpret numeric information in graphic forms." With this focus in mind, a pretest and post-test was included in the course. The post-test was embedded in the final examination.

Student performance on the pretest can only be characterized as abysmal. 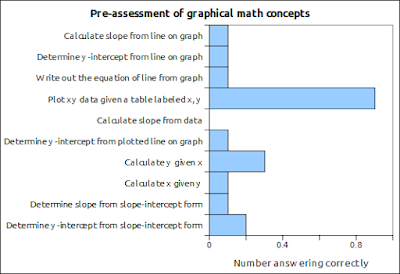 Nine of the fourteen students completed a 100 or higher level college mathematics course prior to enrolling in the SC 130. The mathematics background for five of the students was not determined. Given that background the general inability of the students to calculate linear slopes and intercepts is disappointing. The only skill the students consistently appear to bring into physical science is the ability to plot points on an xy scattergraph.

By term end, the students who were present on the day of the pretest had all improved significantly as measured by the post-test. Note that ten students sat the preassessment, fourteen completed the post-assessment, hence the use of percentage success rate in the following chart. 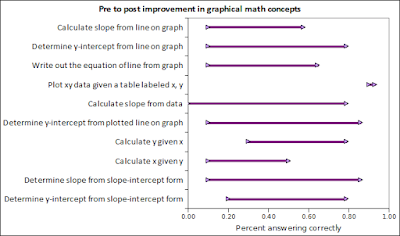 In the chart above, the left end of the line marks the percent of students answering an item correctly on the pretest, the right end the percent answering correctly on the post-test. Note that items such as the slope and y-intercept assessment improved on the first two items even though the problems were made more difficult by a non-zero y-intercept on the post-test.

With eleven items on the pre-test and post-test, scores for students could range from zero to eleven. The median score on the pre-test was one, on the post-test items was eight. The rise in the mean score was from 1.43 to 7.5. The score distributions as box plots provide some insight into the lift in scores from the pretest to the post-test. Note that ten students sat the pre-assessment and fourteen sat the post-assessment. 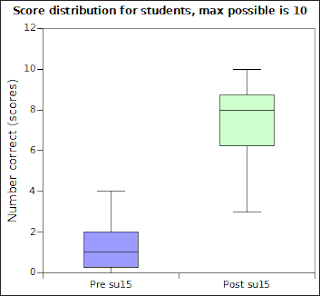 As reported above, student ability to include thoughtful discussion and interpretation of data supported by their quantitative evidence was not accomplished by all students as measured by laboratory fourteen. In fact only one student questioned the whether the data was linear (the data was not linear).

Producing sophisticated scientific arguments was a bridge too far for a number of students. The analysis of laboratory fourteen suggested that only three of fourteen students (21%) could engage in a meaningful discussion of their data. Spring 2015 seven of eighteen students (39%) showed an ability to reasonably and meaningfully discuss their results. The compressed summer term may leave less time for reflection, contemplation, and insight.

Inherent in supporting institutional learning outcome two, which course learning outcome four serves, is proper mechanics. Physcial Science laboratory report marking rubrics at the national campus include evaluation of four broad metrics: syntax (grammar), vocabulary and spelling, organization, cohesion and coherence. Each of these four metrics is measured on a five point scale yielding a total possible of twenty points. In general, students enter the course with writing skills. Errors of tense and agreement tend to mirror areas in students' first language that do not have similar tense or agreement structures. All students in the class are working in English as a second language.

In general there is no significant change in mechanics measurable from laboratory one to laboratory fourteen. The sample size is small and the change in individual scores is also small. Measured across all four metrics, the median score went unchanged. On the first laboratory the median was the maximum possible of 20 points, the median at term end was 20 (n = 10). The students in the class generally had basic grammar skills when they arrived in the class. Over the duration of the summer only two students had frequent grammar and syntax issues. 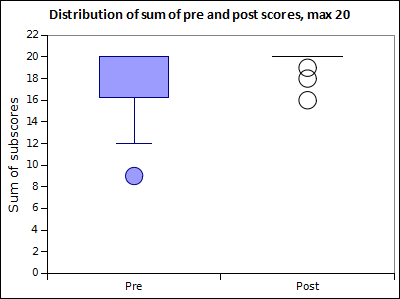 The mean score at term start was 17.57 out of 20, at term end the mean score was 19.5. The course may be more beneficial to the weakest writers.

Considering the four course level outcomes, there are areas where improvement can be sought. A challenging area for improving performance would be in the students ability to engage in more sophisticated discussions of their experimental results. The students do not have a rich and varied background in science, and the course is serving principally non-science majors.

The course also has the intent to communicate affective domain messages to the students. One is the idea that doing science is fun, the other is that the students can do science. Science is not a subject in which the students have all experienced success. This term these impacts were not measured, these are subtle and difficult to quantify.

Over the years, however, students will at times comment on an image posted by a student from the class. The comments are always positive, of the nature that the course was interesting and fun. Learning happens only where there is motivation to learn, and when an activity is enjoyable, a learner will engage more fully with that activity.

Physics, mathematics, and fun are three words that do not often co-exist in a single sentence, a single class, or in the mind of a student. Yet they should. The mathematical nature of the world is fascinating and fun. My hope is that those three words can now co-exist in the minds of the physical science students.
assessment physci