June 04, 2015
This term I prepared separate lecture and laboratory syllabi as opposed to a single integrated syllabi. The splitting of the syllabi is part of an effort to document that each is a separate preparation for an instructor.  Monday I passed out these two syllabi and then administered the preassessment.

Course add/drop continued into Tuesday. With the course not full, students were still adding the course on Tuesday, thus I opted not to run a laboratory. With no class in the A204 computer laboratory from 9:30 to 12:30 this summer, I took advantage of the open slot and, after covering the preassessment, moved the class upstairs to get the class logged into Schoology.

Wednesday marked the first lab day, beginning with an exploration of the density of soap. 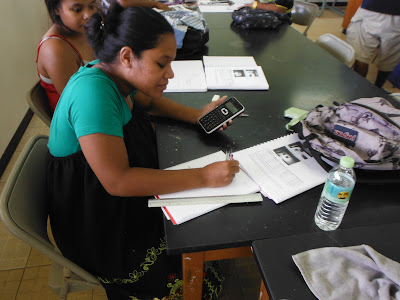 Perdania making calculations of the volume of the soap slab. 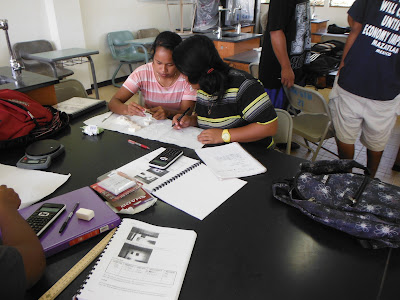 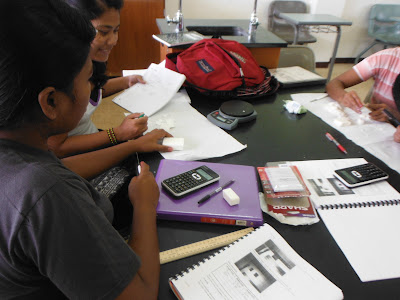 Working with the soap slab. 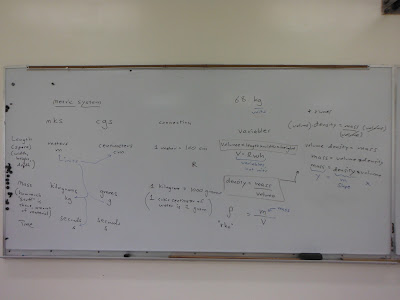 Wednesday lecture began with an introduction to MKS and cgs units, a brief run through alphabet soup mater, and on into density. 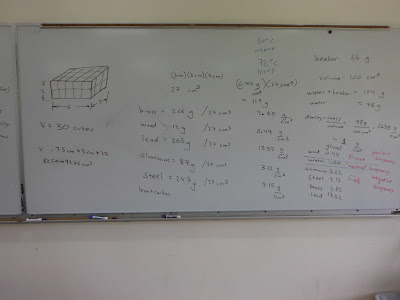 The students measured and massed a set of denstity cubes of varying materials. 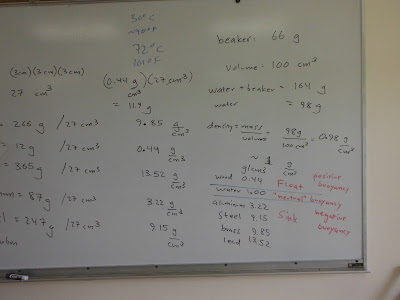 I also calculated the density of water and noted that objects with a density less than that of water float, greater sink. 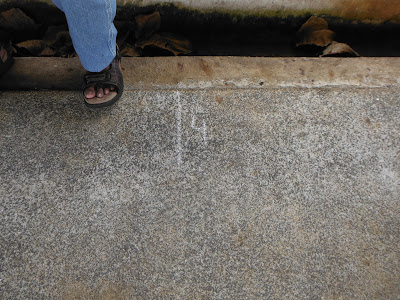 I used Thursday morning to take the class into the computer lab again, this time to show them how to set up a laboratory report. That meant no RipStik linear regression introduction to the rolling balls laboratory two. Sitting at lunch I decided to forgo the logic that drives the existing laboratory two: forcing the time to be the independent variable and the distance to be the dependent variable. 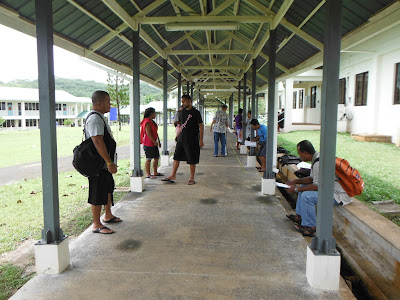 Michael at 400 cm
,
By that I mean the time is counted off out loud in seconds and the students track the location of the ball at a specific time. Then the distances to that timing point are measured. There are two problems with this approach. The first is a reaction time issue at timer start. This typically leads to a "large" first second distance. 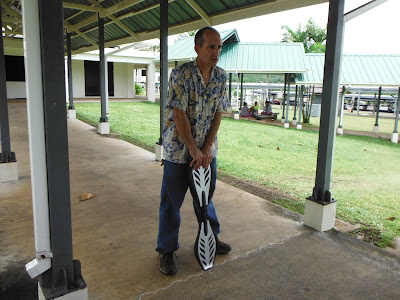 The second issue is that ball invariably slows down, generating a curve rather than a straight line. 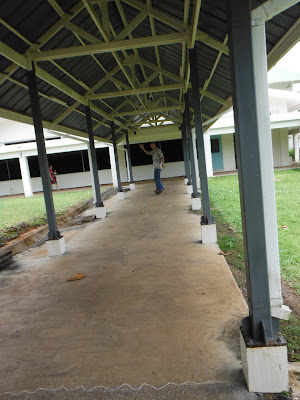 Attempts to roll the ball and use multiple timers to measure the time to preset distances had proven even more problematic. The timers never started at the same instant, with errors large enough that a down range timer sometimes had a shorter time than an up range timer. This approach had been abandoned in favor of measuring distances to specific times (second marks). This generated a single x-axis with common times for all ball runs (slow, medium, fast) and simplified the table and graphing in a spreadsheet. 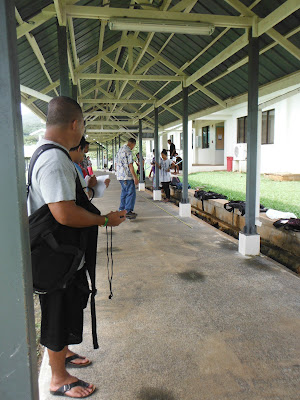 Sitting at lunch chewing on my chicken adobo I realized that the timing problem of the early years where we timed the ball to preset distances was partly a problem of high ball speeds and short distances. If the speed could be reduced and the distances lengthened. But both were problematic. Slow balls stop rolling. And long distances were difficult with the posts - balls thrown fast enough to roll at least six seconds were moving fast and hard to control. The ball often hit posts. 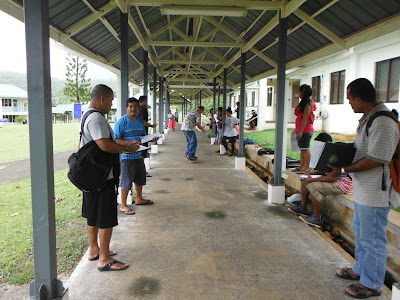 I wanted to ride my RipStik anyway, and I knew I could both control the speed, keep the speed fairly constant, and avoid the posts. Distances could be large which would reduce the impact of timing errors. Runs could easily exceed six seconds, any timer start errors would be dwarfed by the distances. 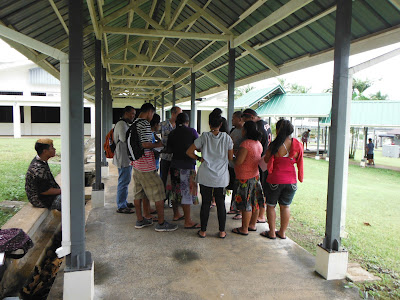 I did the first pass at coast from up at the LRC. This rolled me up to a reasonable speed, which the gentle slope of the sidewalk effectively maintained. I only had to swizzle slightly down near the door of the south faculty building to offset the slowing effect of level terrain. I reached 2400 cm in 15 seconds. A best fit line would later suggest I hit a speed around 164 cm/s. 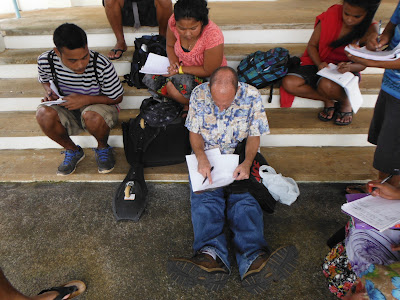 Recording data into a table

I then explained that my next run would be a slow run. I started not much more than a meter off the zero timer start mark and maintained the minimum speed I felt I could stably hold. This required swizzling down range to hold speed. The whole run took 36 seconds out to 2400 cm. There is no way to roll a ball that far in a straight line at that speed. The RipStik was a superior solution. A best fit line would later put my speed at around 65 cm/s. 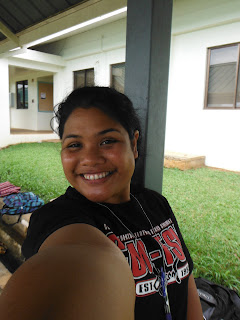 The photographer for today, Cherish, opted to take a selfie. My thanks to Cherish for covering this first run of this version of laboratory two. Good photos of what I needed imaged!

The last run would be riskiest from the riders perspective - a speed run down the 2400 cm straight away. I started at the LRC and swizzled into the timer start mark. I continued to push the board reaching 2400 cm in 8 seconds. The linear regression would come in at 305 cm/s.

Rain would force us off the porch and into the faculty lounge where I laid up the following spreadsheet. The design meant that the distance was technically the independent variable and the time was dependent on the chosen distances. A graph of distance versus time, however, would be pace not speed. I wanted speed and wanted all three lines on one graph. So I showed the class the following layout which accomplished this goal. 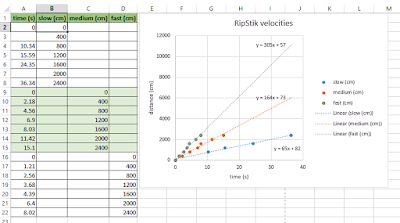 Although I loathe Microsoft Excel, I used Excel because that is what the students face using in the library at the campus. I remain puzzled by the insane choice of an auto y-max at 12000. I could not immediately lay my hands on the y-axis manual scale control (turns out to be buried in a submenu in the sidebar menu), so I left it. Save yourself and the lives and sanity of your children: use LibreOffice.org.

The new 4.4 Fresh series has tweaked the toolbar button defaults in a most positive way. LibreOffice can also do the sidebar stuff, but the menus are still there with all the functionality located just where it has been located for the past decade and then some. Excel does nothing new in the new and ever more confusing user interfaces.

Laboratory two went well with the RipStik. Laboratory one did not get the chance to run through to testing their soap. This will have to be glued onto the front of Friday this term.
physci
Location: College of Micronesia (National Campus), Palikir, Pohnpei, Micronesia