Student reaction to on line tests and quizzes in statistics

April 29, 2015
Spring term 2015 Schoology was used to deliver tests and quizzes on line in MS 150 Statistics. In previous terms all tests and quizzes were paper based. Schoology critically permitted fill-in-the-blank questions along with essay answers which were necessary to moving to on line assessment instruments.

The first on line quiz in January was delivered with some trepidation. How students would react to on line quizzes and tests was not known. In addition, the on line quizzes and tests had to be deployed in a way that would cope with power outages. This meant setting up the quiz so the quiz could be resumed. I also chose to allow the students to immediately see what they answered correctly and what they answered wrong, even though the physical layout of the laboratory could lead to potential problems. Each quiz and test was effectively an experiment, but each went well and students did not appear to use their earlier submitting neighbors results to change their answers.

At term end I used Schoology to deliver a poll via an update on whether students liked or disliked on line tests and quizzes. The answer choices were:
87% of the 55 students polled either strongly like or liked the on line quizzes and tests. 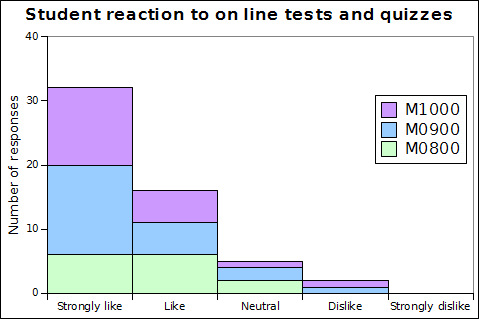 Nine percent of the students were neutral, only two students disliked taking quizzes and tests on line. No student strongly disliked taking quizzes and tests on line. There is, of course, potential for bias in these results. There is always the possibility that the students would prefer to agree with what the instructor has done.That said, there is sufficiently strong support for the on line testing to continue this in future terms.
assessment education statistics tech