Some plant based foods of Micronesia

March 11, 2015
The students in SC/SS 115 Ethnobotany presented a selection of plant based foods from Micronesia. 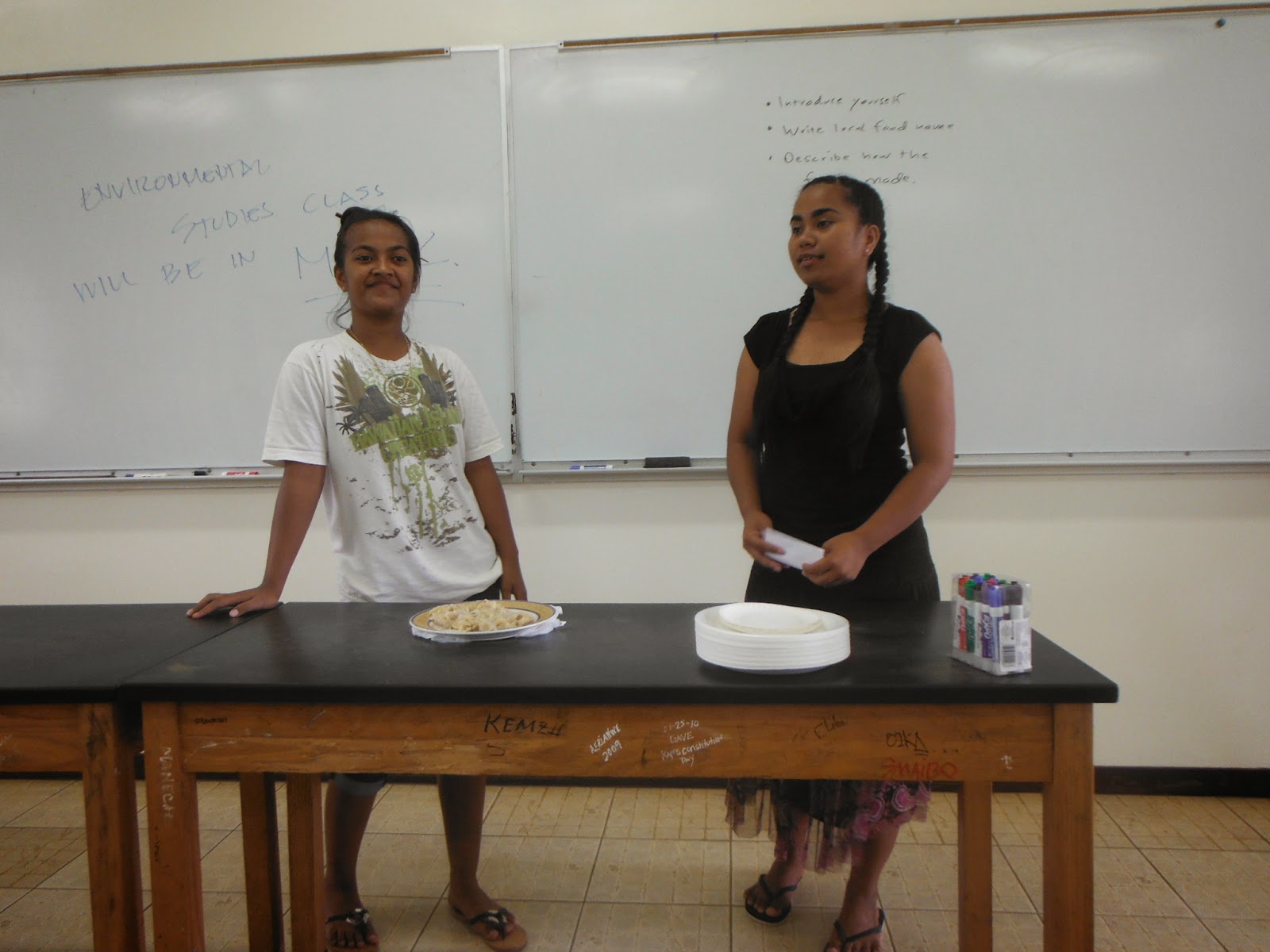 Petery Peter and Beverly Billy presented the Chuukese food sukusukun uuch, a banana based dish with coconut milk topping. The bananas are cooked and then pounded. 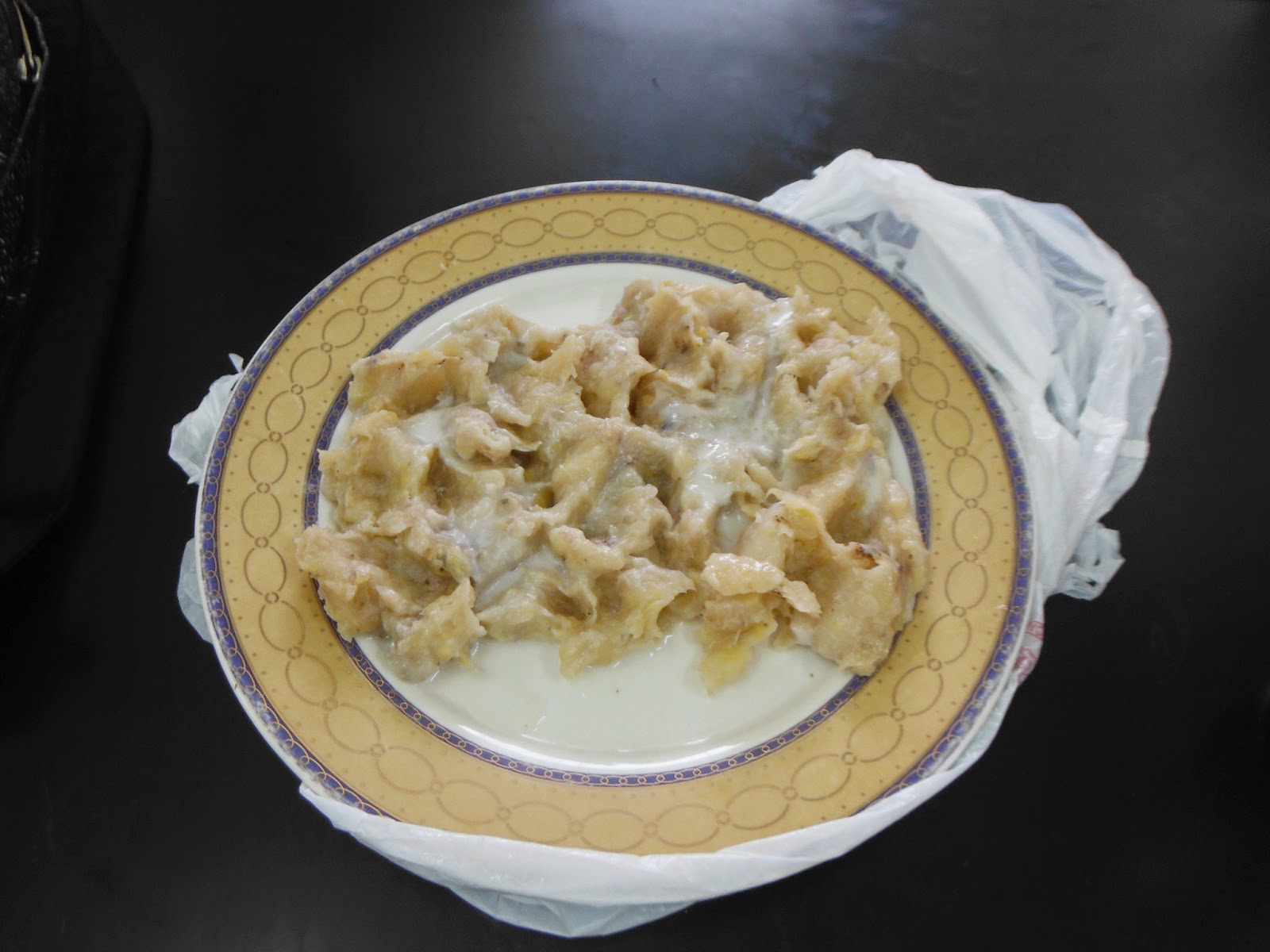 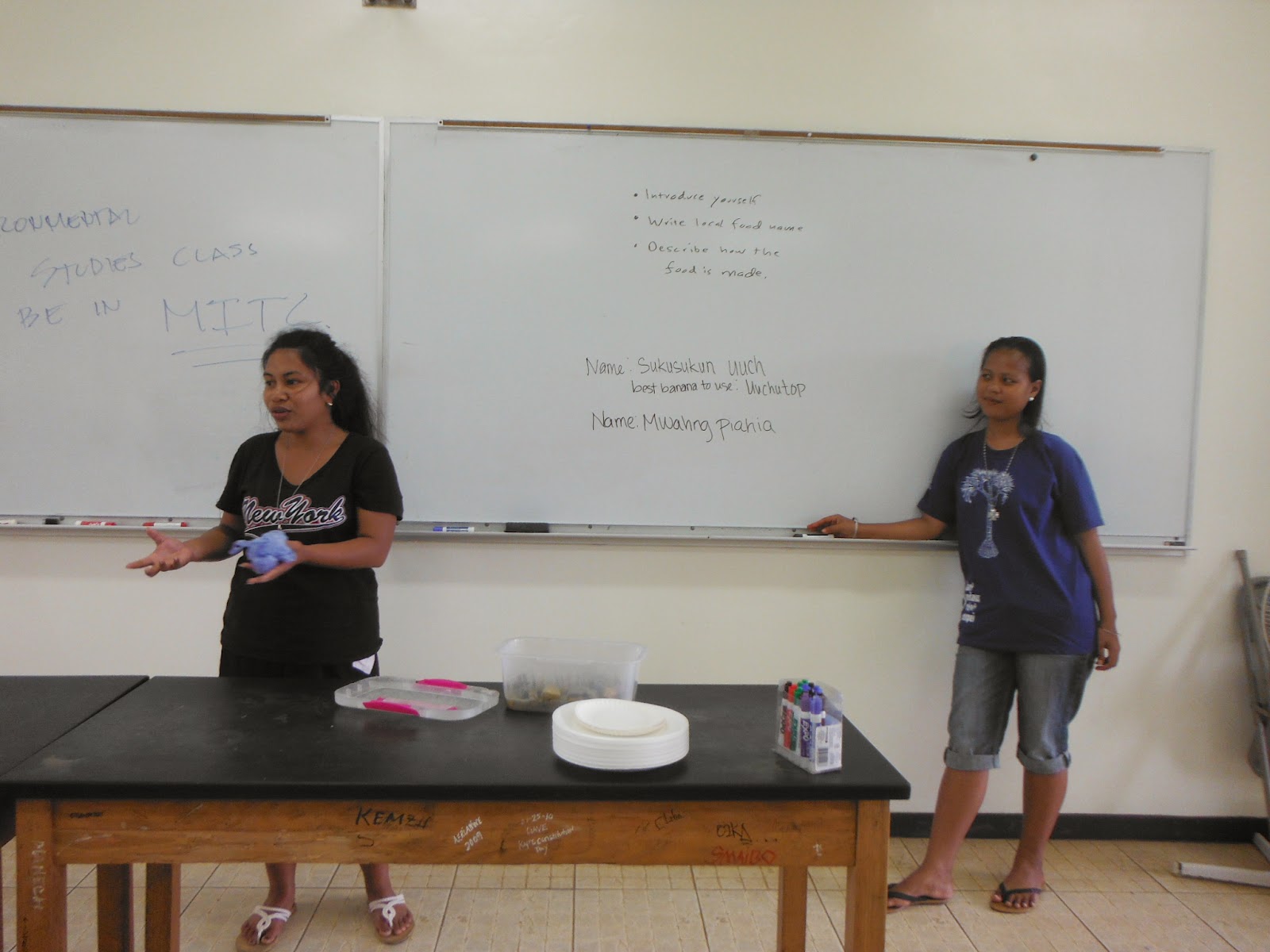 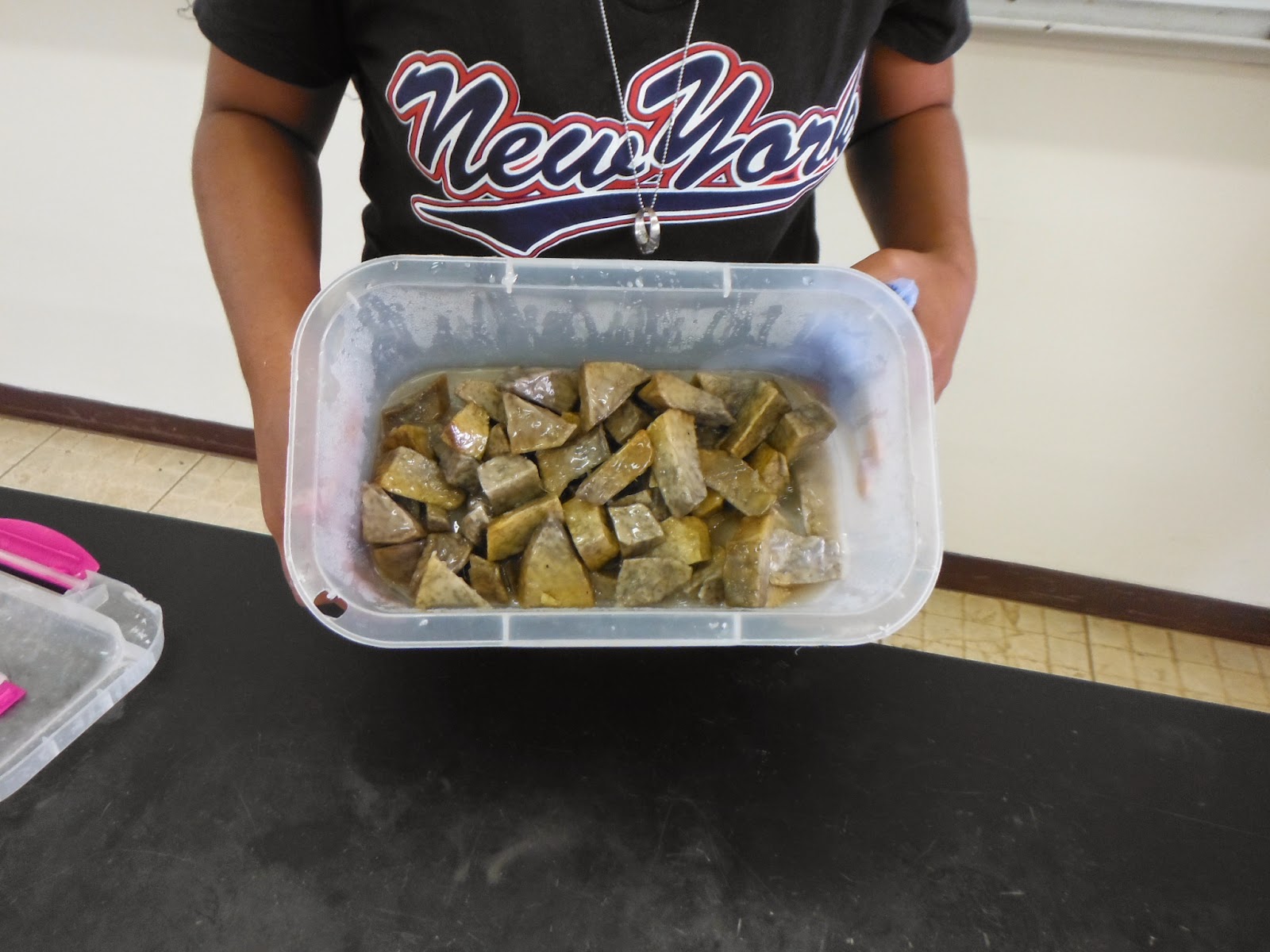 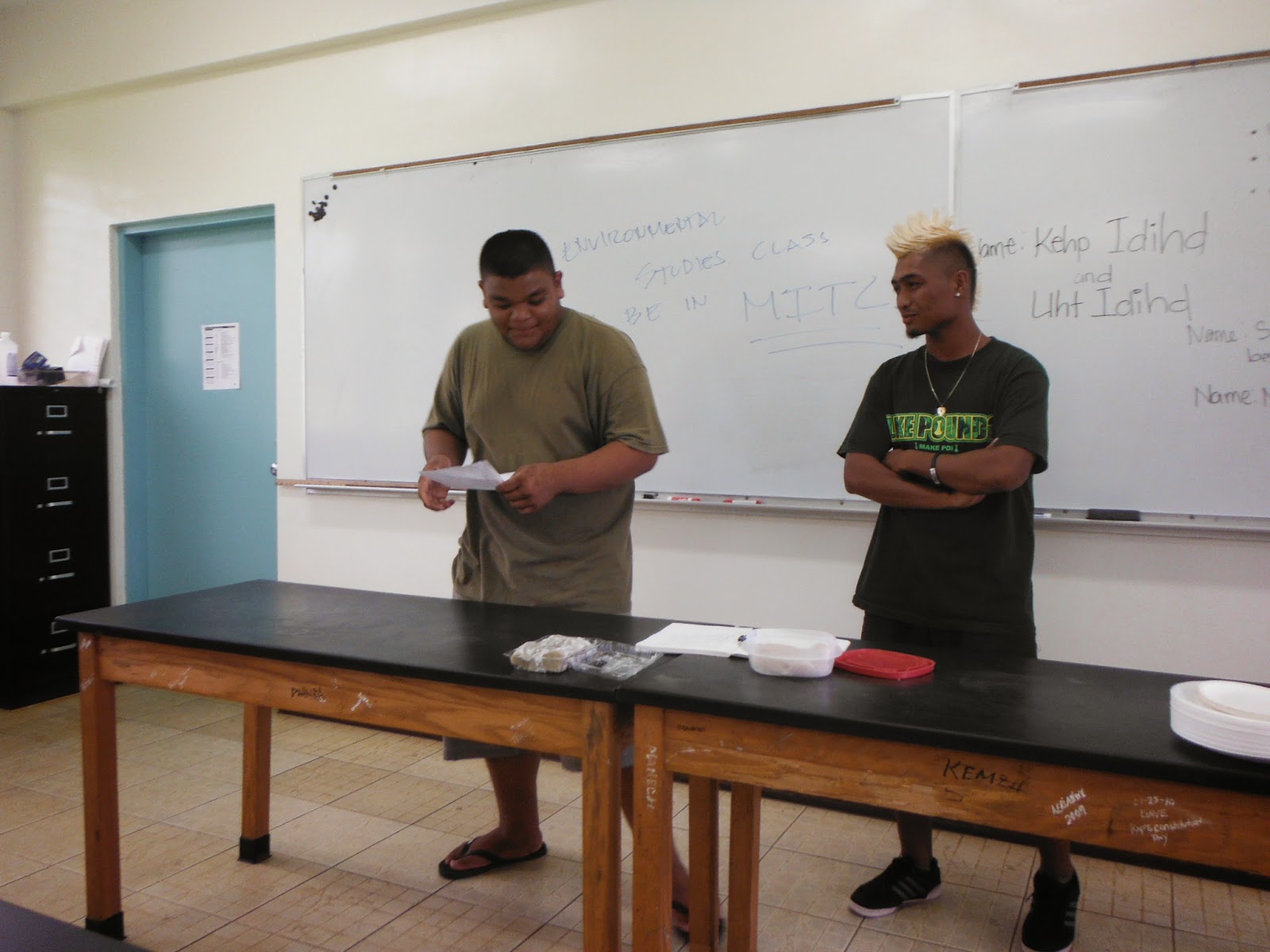 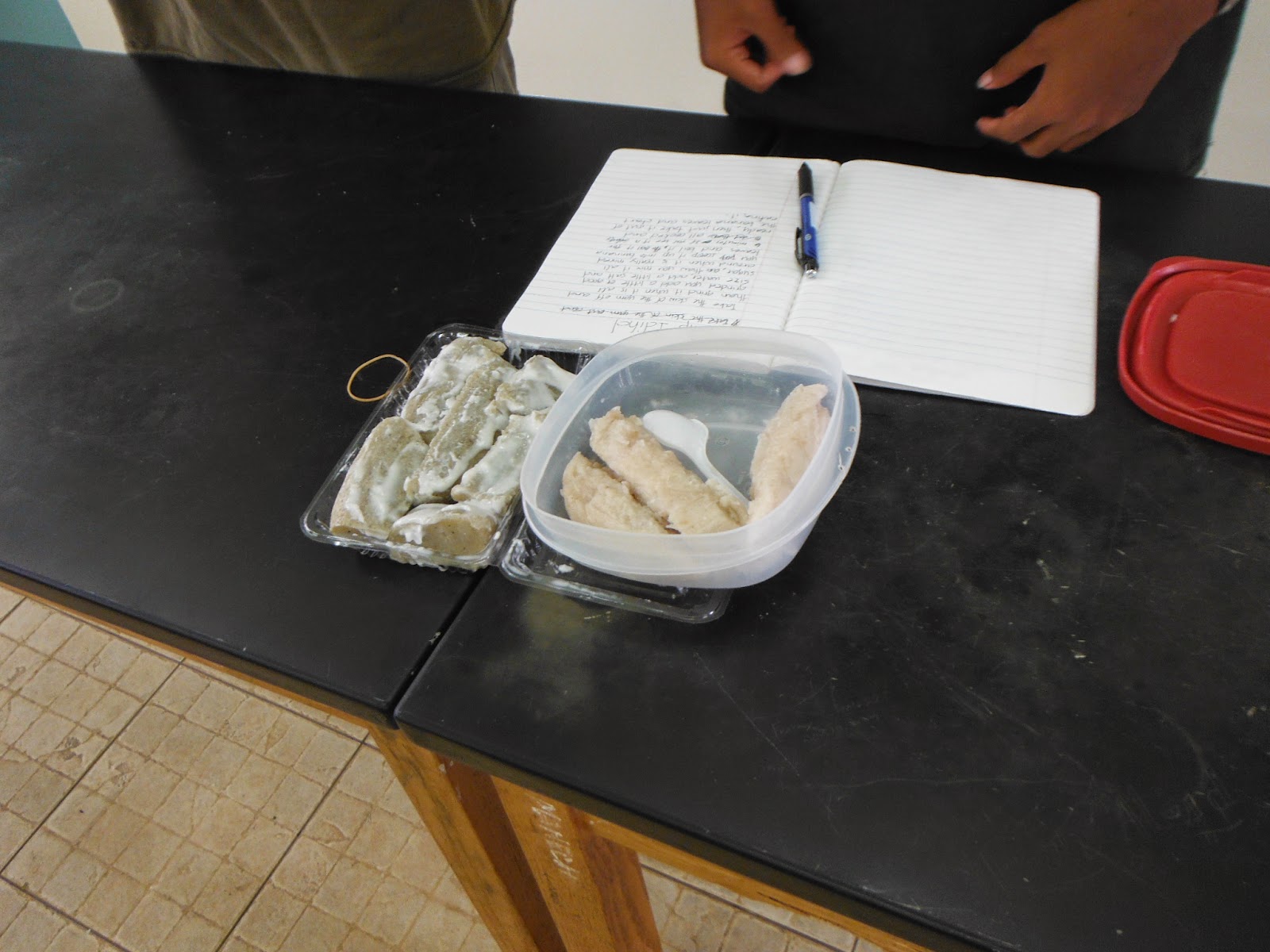 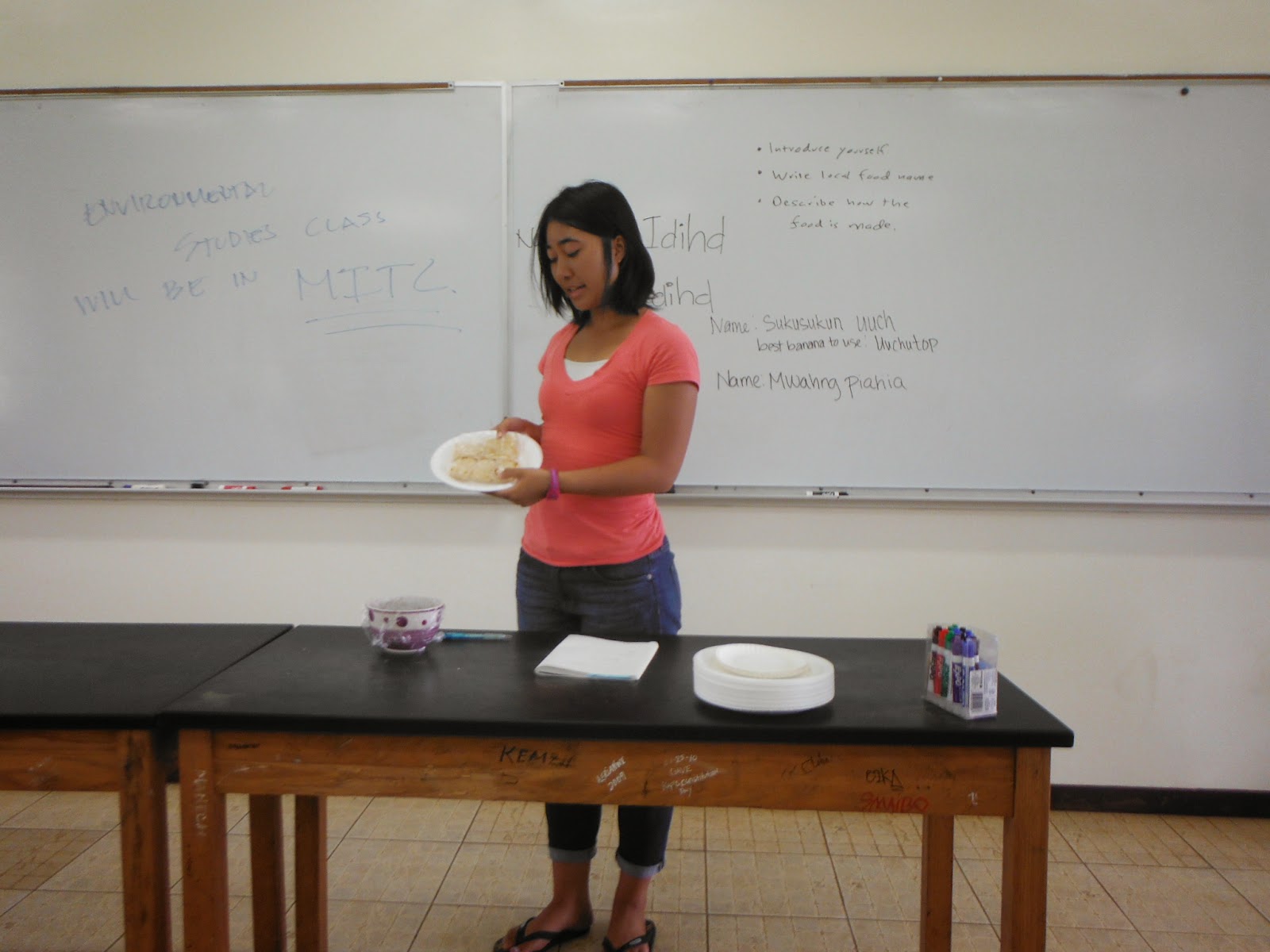 Miki Fritz of Japanese and Chuukese heritage, presented Japanese mochi. Made from a sticky rice which has been cooked and then pounded in a large wooden pounding bowl. Mochi can be eaten with shoyu or seaweed, or with red bean sauce. Mochi is a traditional delicacy at new year. 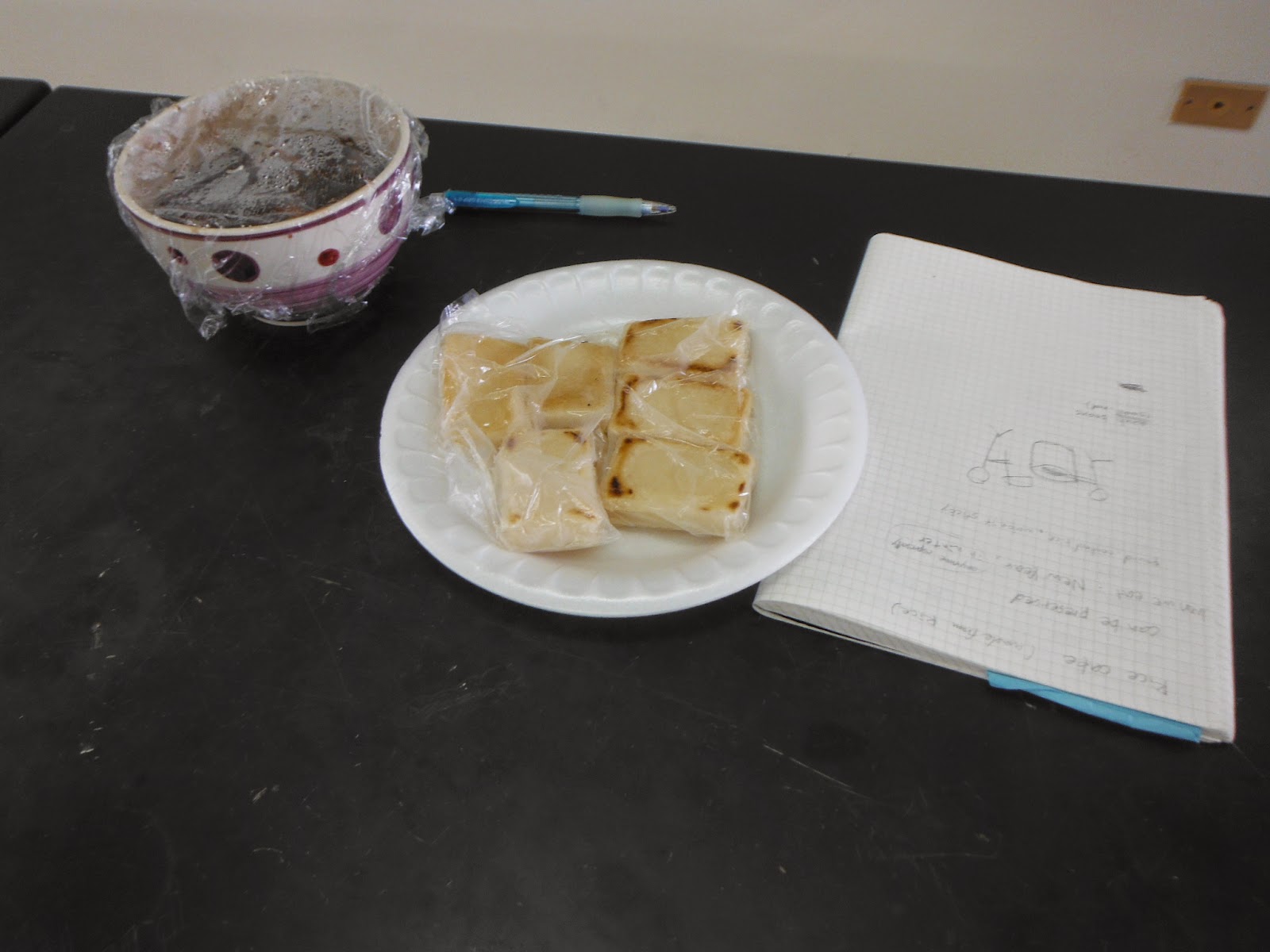 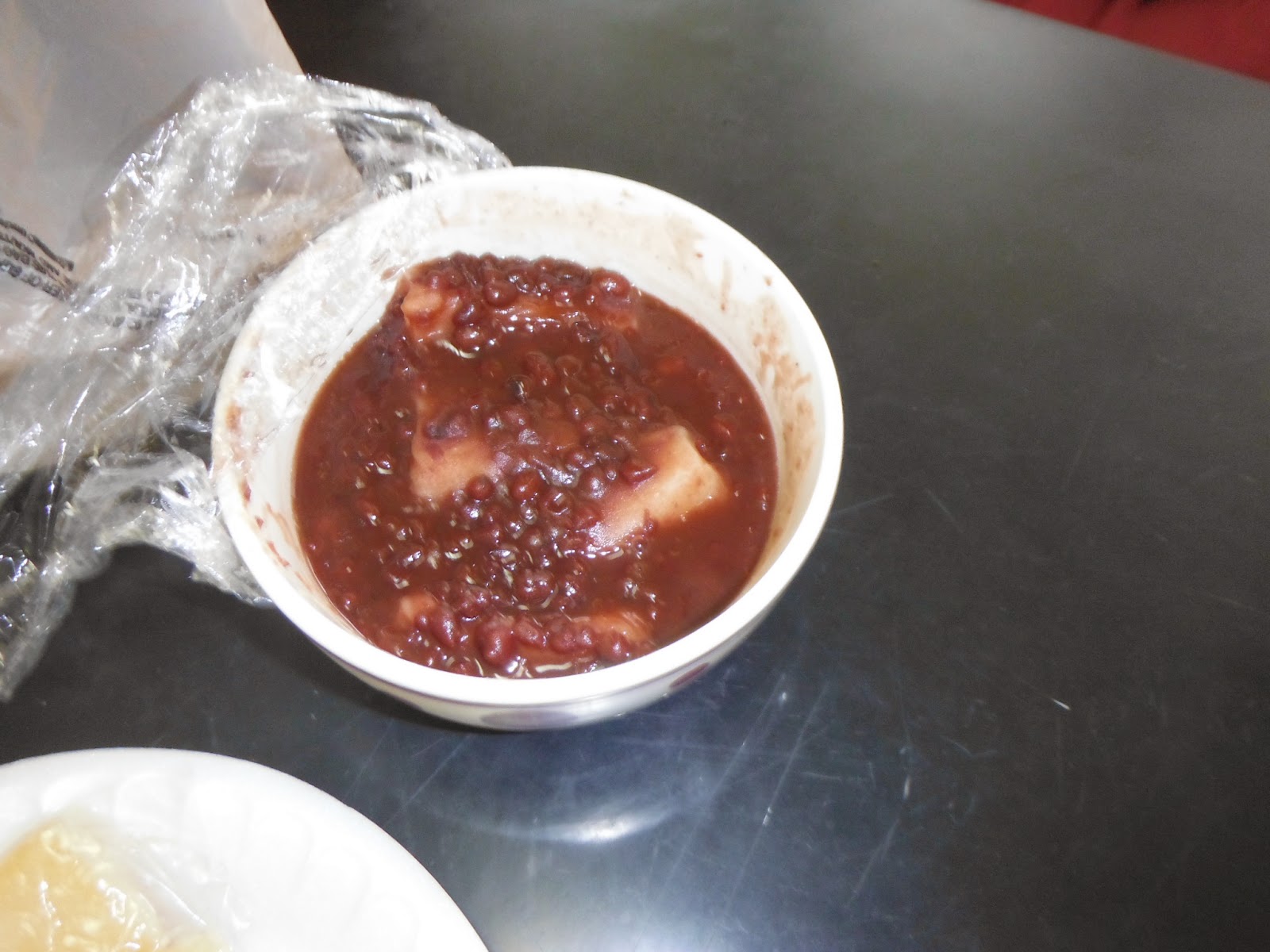 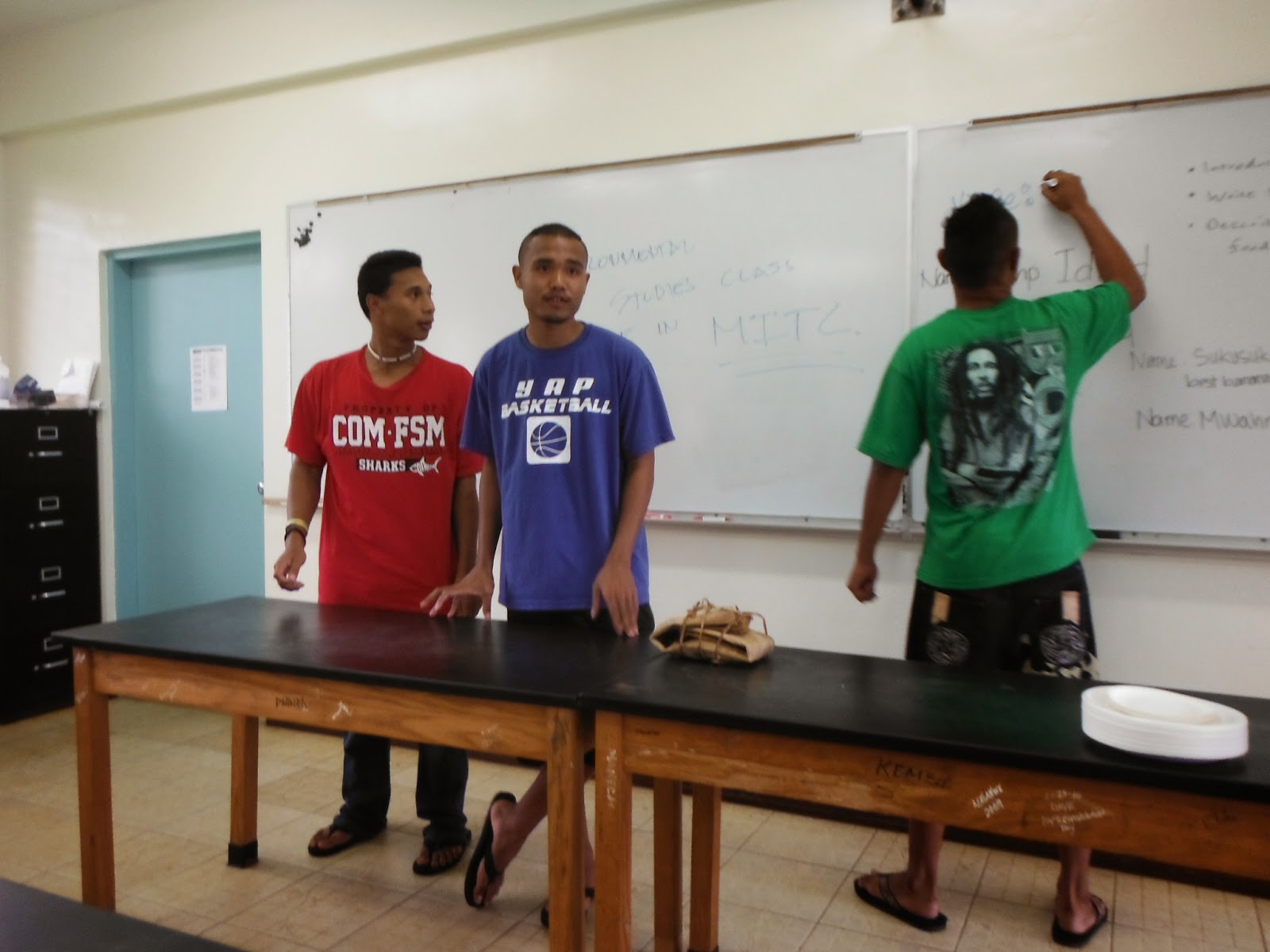 Alexander Kenrad, John Yilbuw, and Sebastian Yinnifel present boiled ground banana Yapese style, a dish called pusow. A key difference is that sugar is not added to the pusow as is often done with the pounded banana dishes of the eastern islands. Historically sugar was not added, the addition of sugar is essentially a modern development. 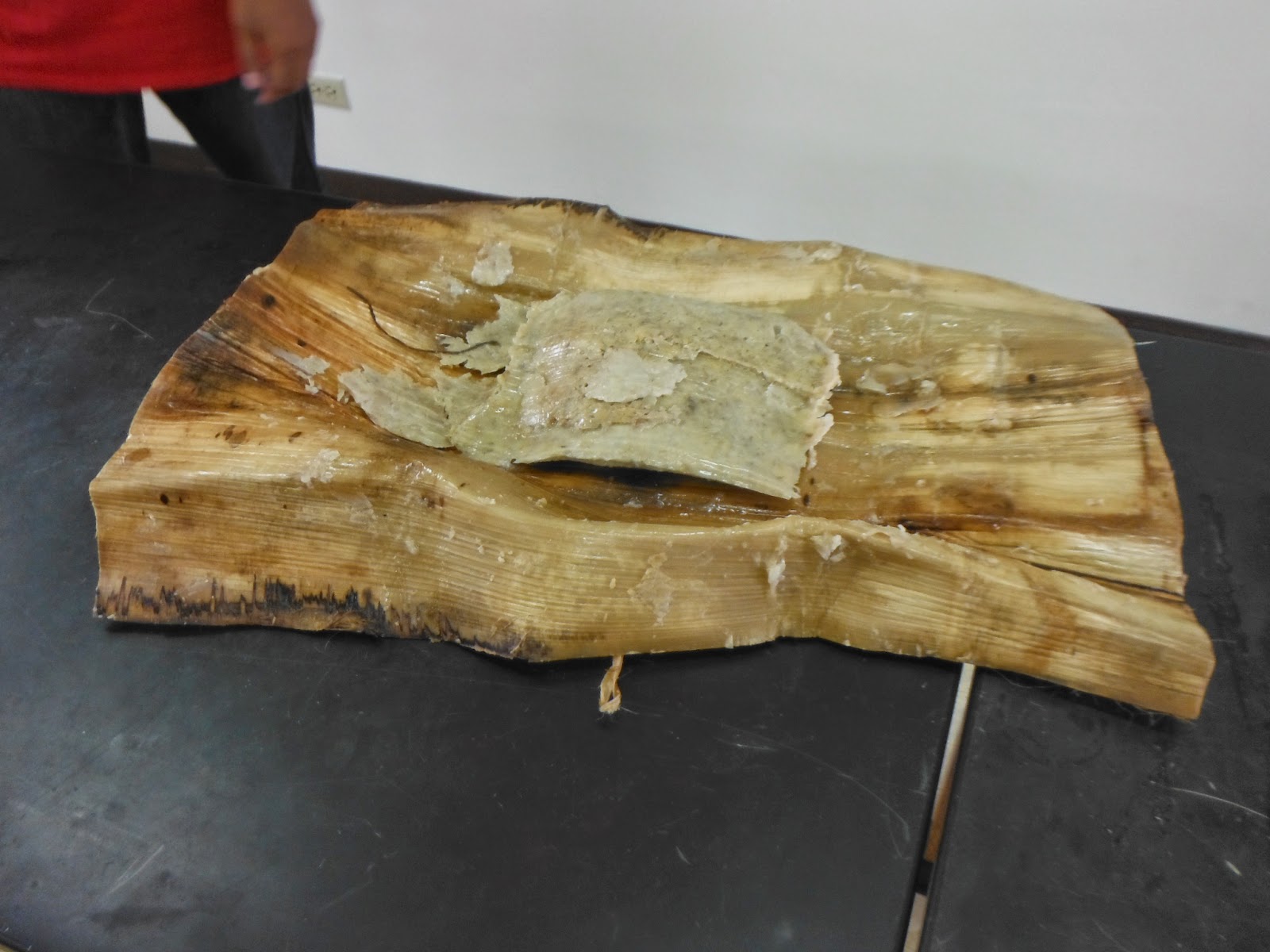 The pusow is wrapped in the base of a betel nut tree frond and boiled in water. 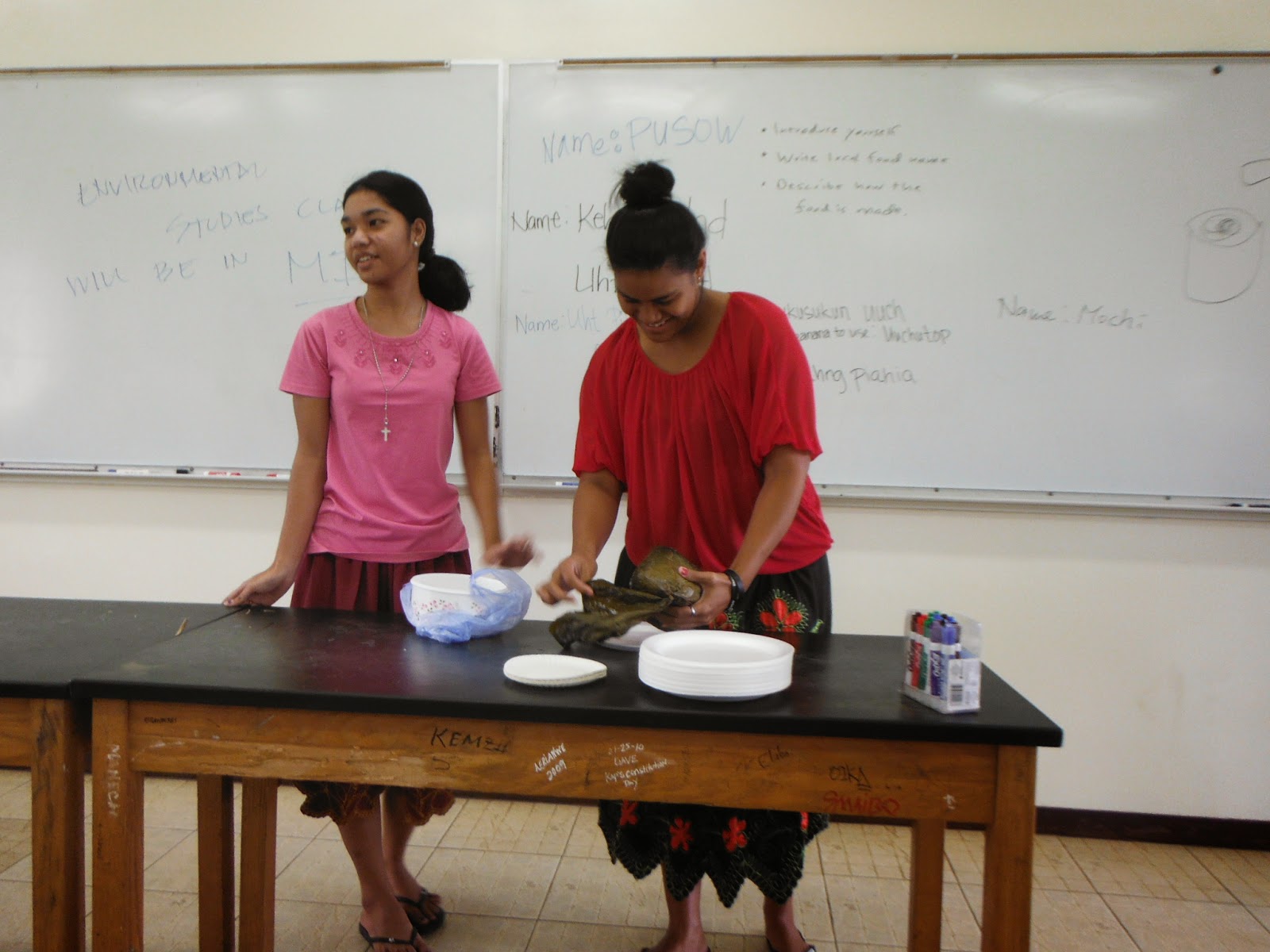 Patty Mario and Herpelyn Ilon present a Mortlockese specialty, amat. Amat is boiled ground taro. Sugar is added to the ground taro prior to boiling. 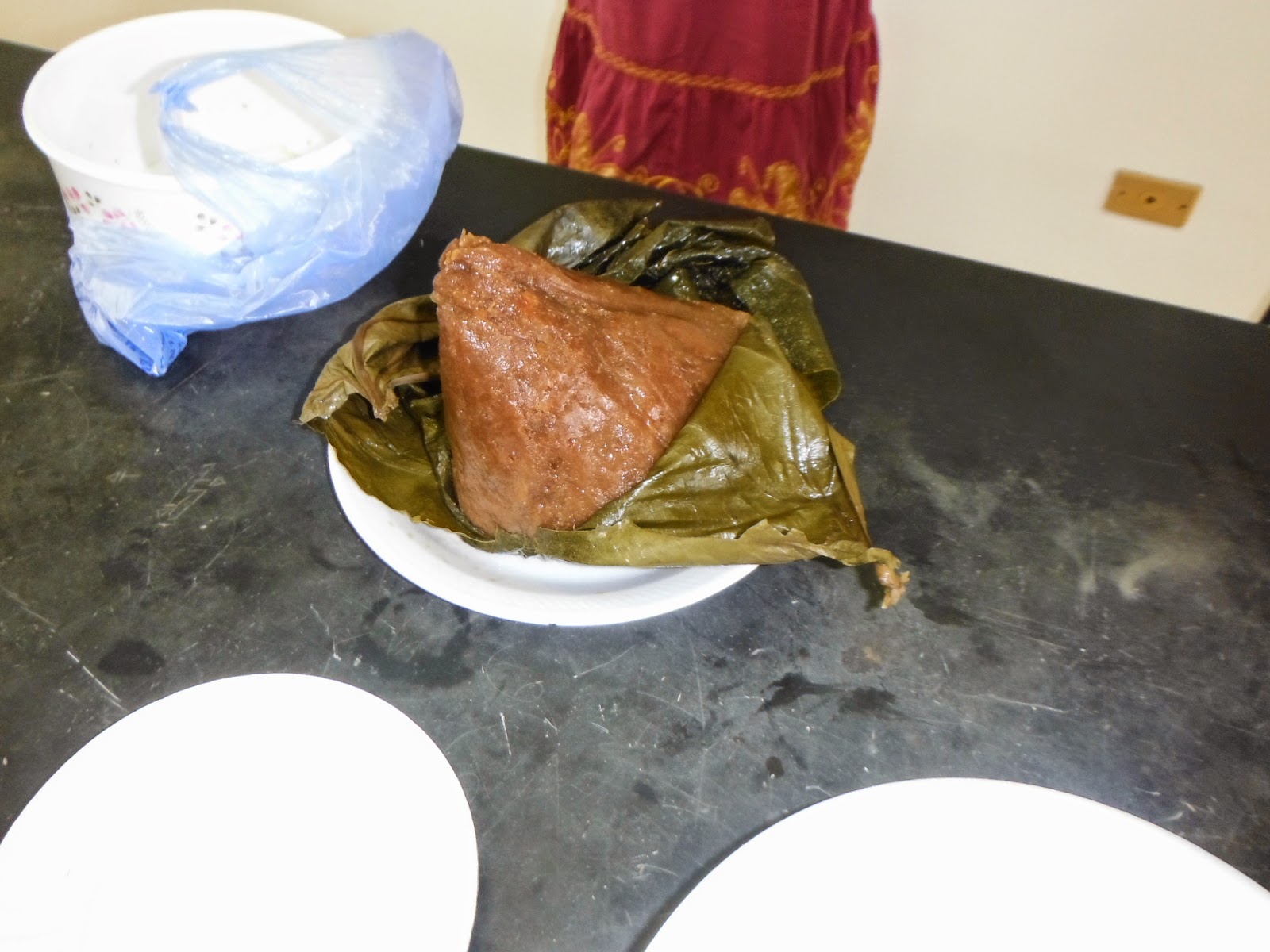 Although the boiled ground taro might appear like similar dishes found across Micronesia, there is a hidden difference. Prior to boiling a hole is made in the taro and coconut milk is poured into the center of the taro, infusing the taro with coconut milk. 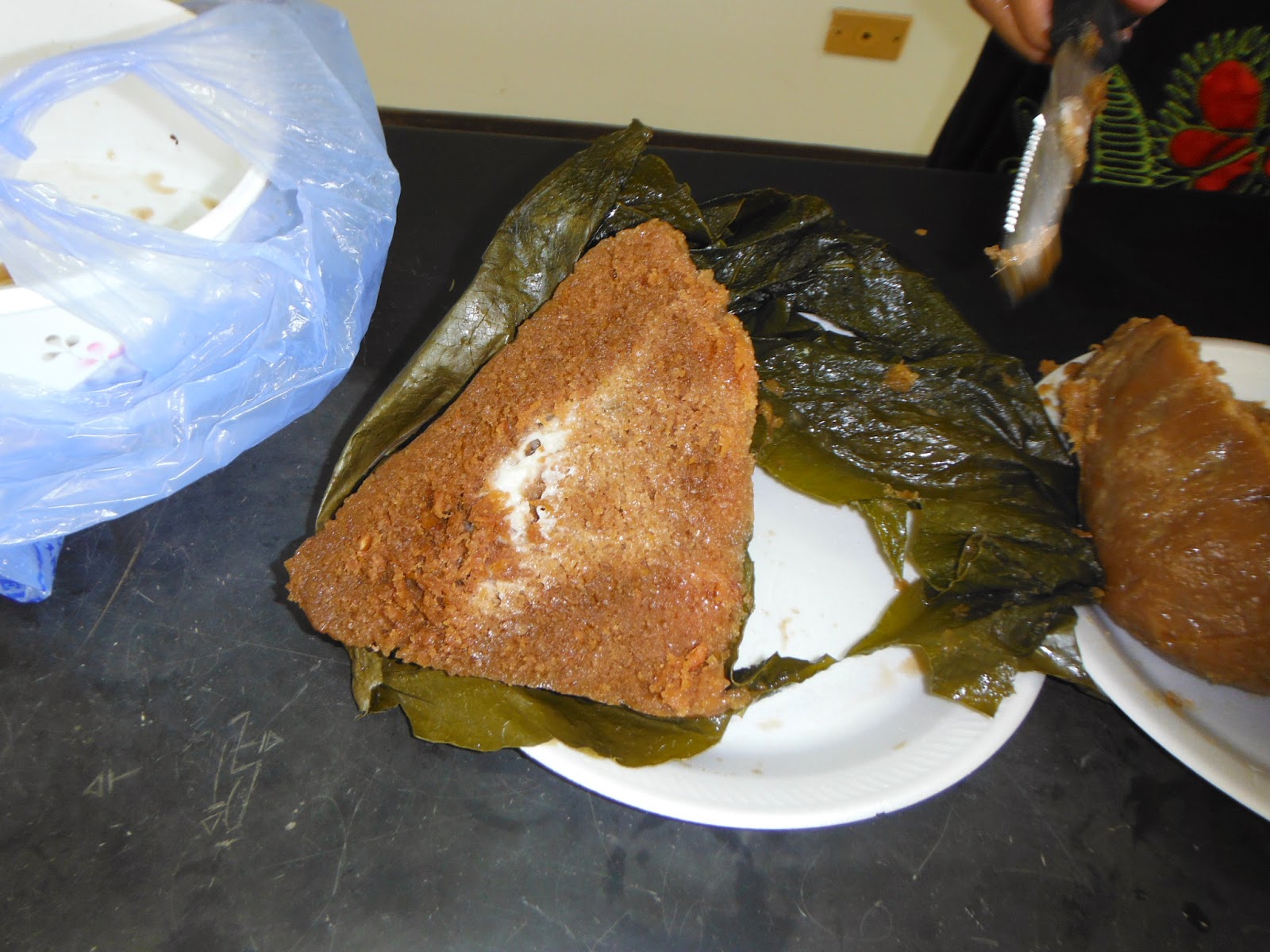 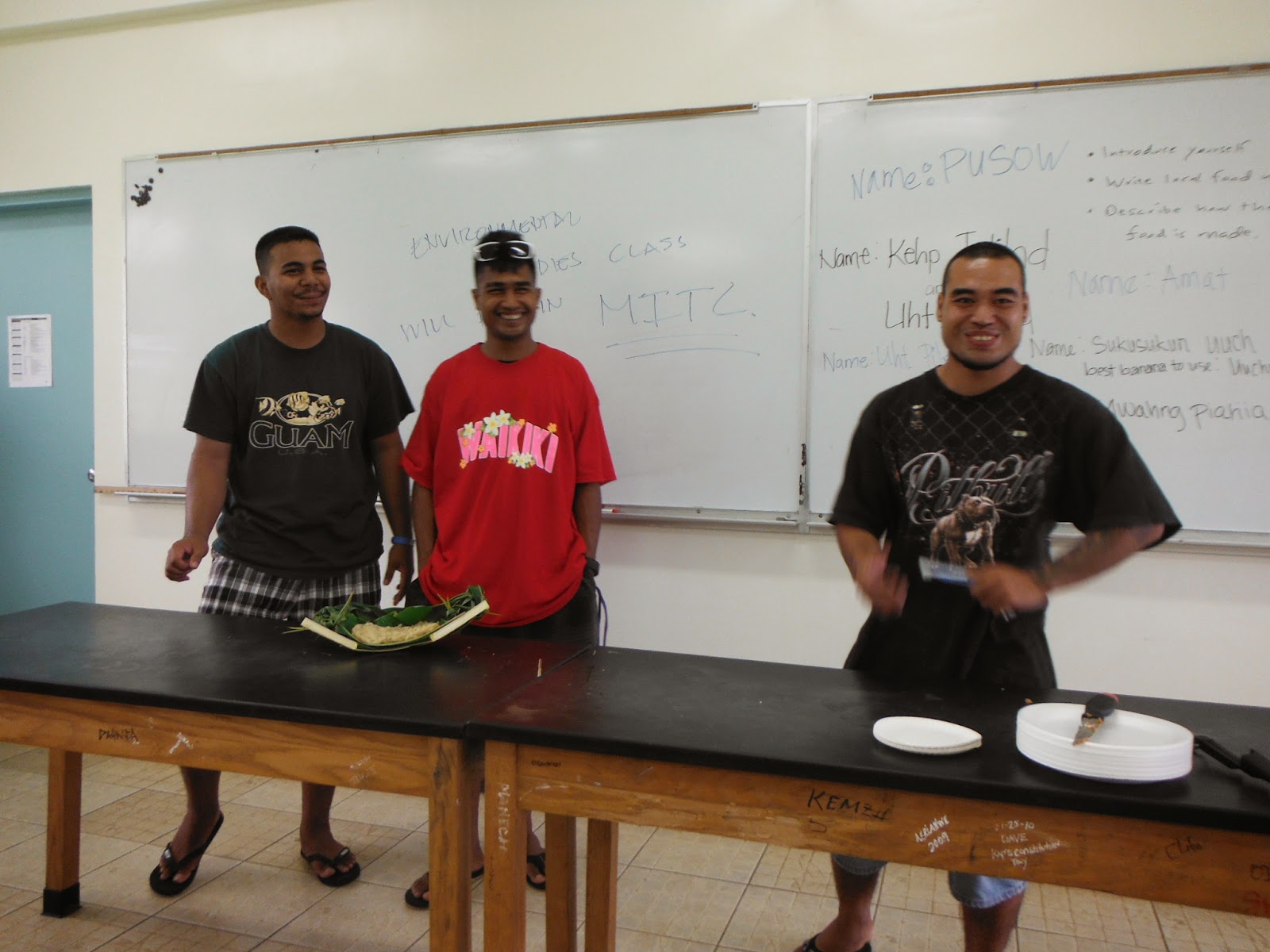 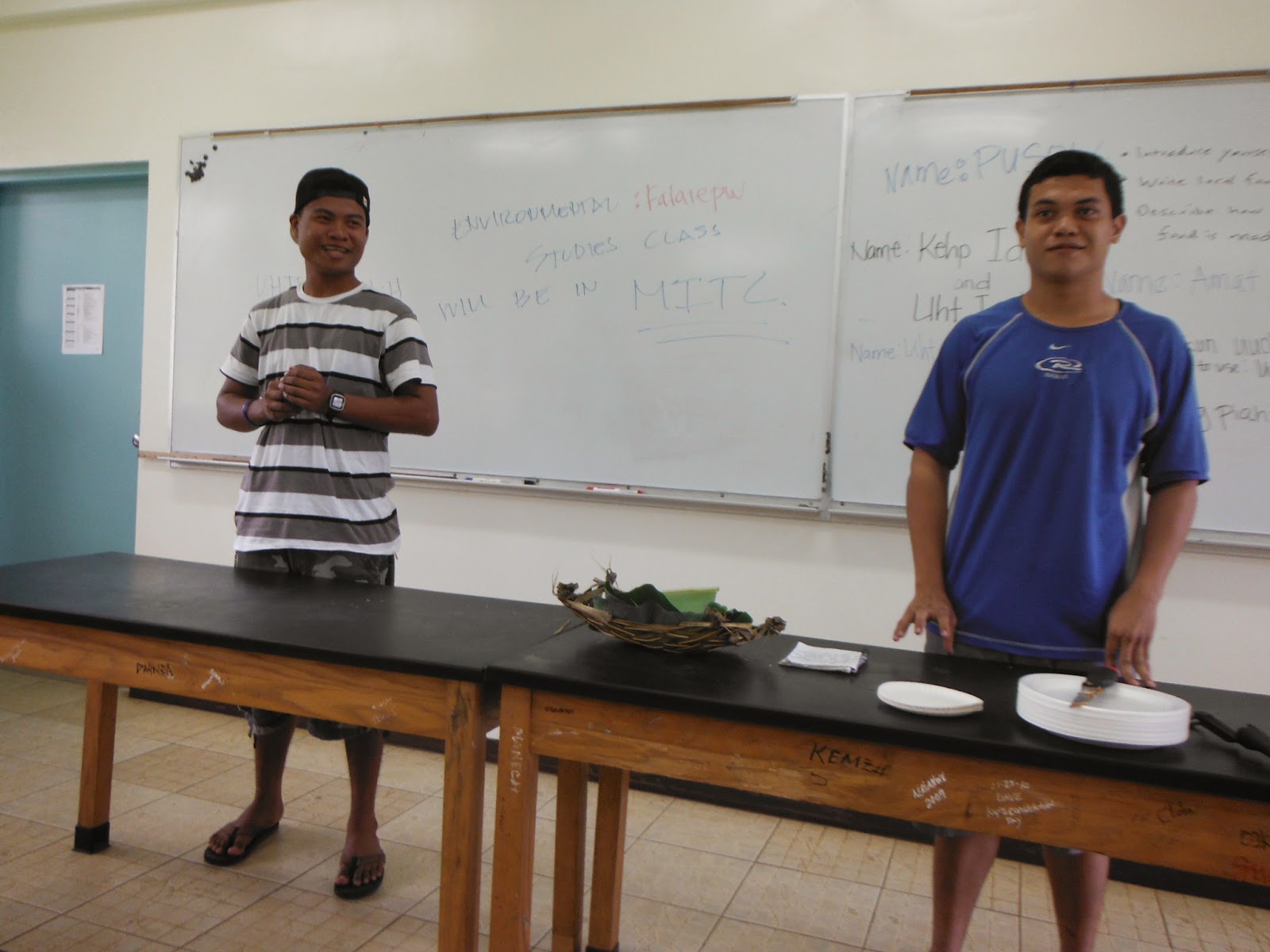 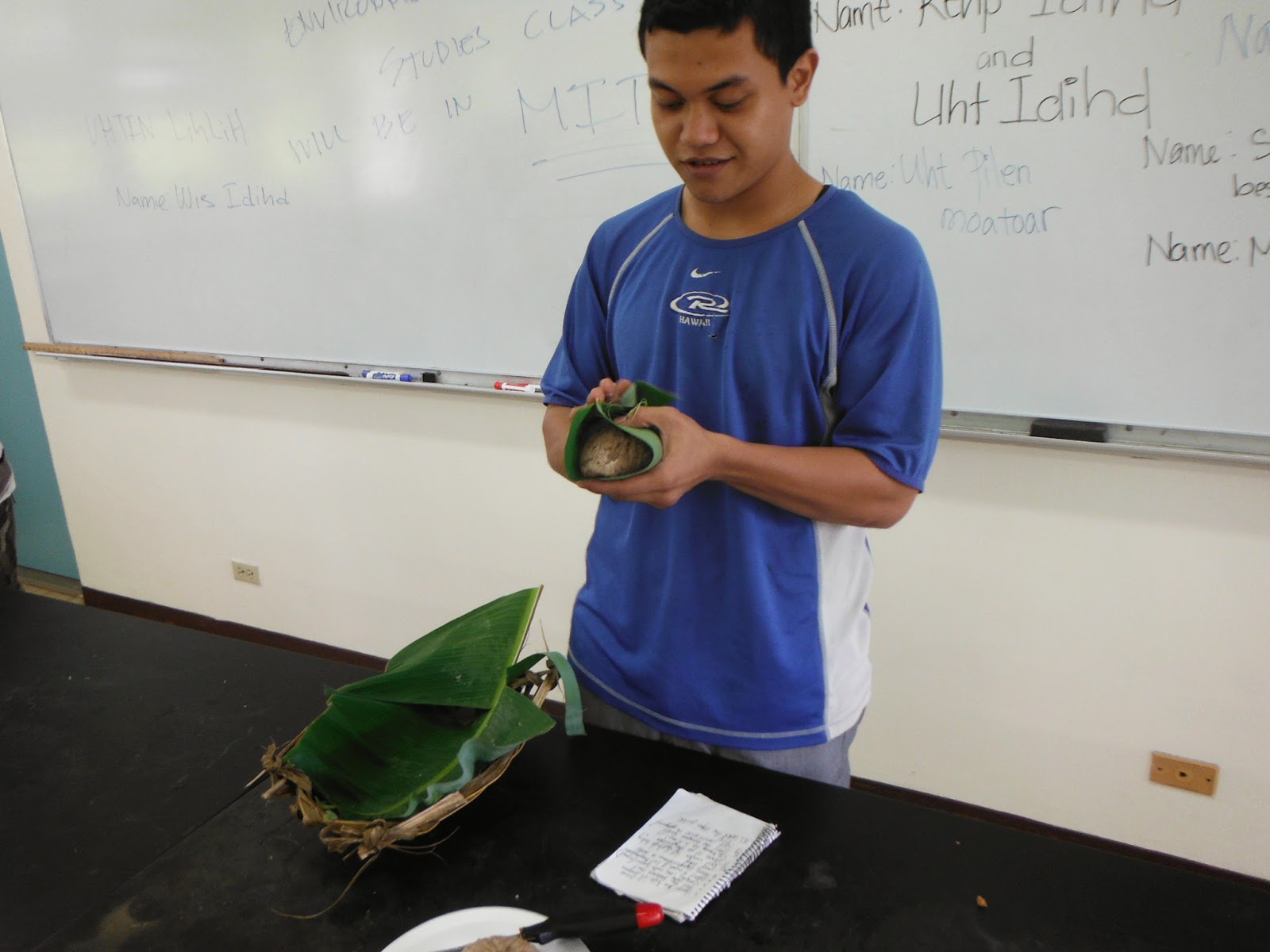 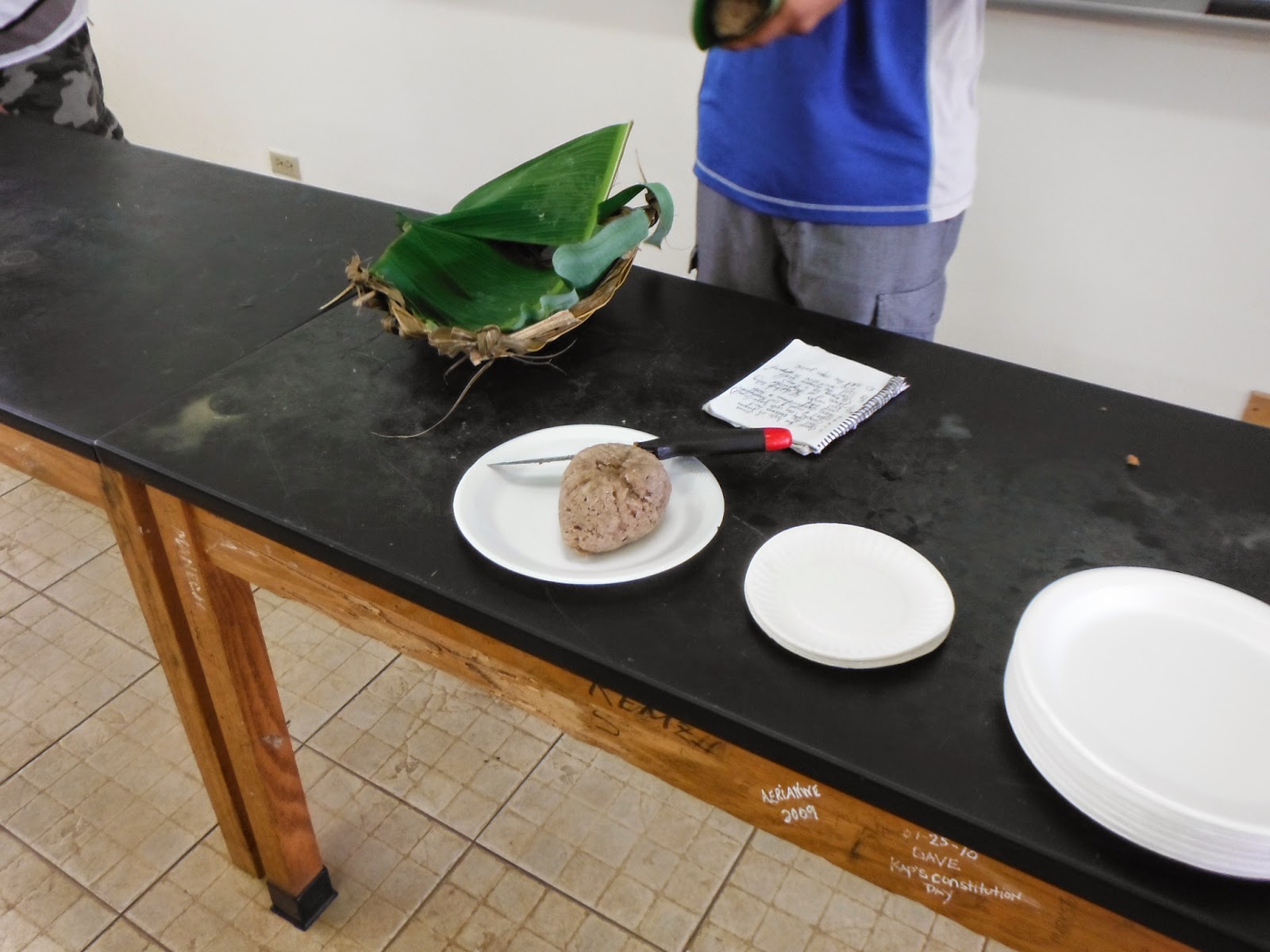 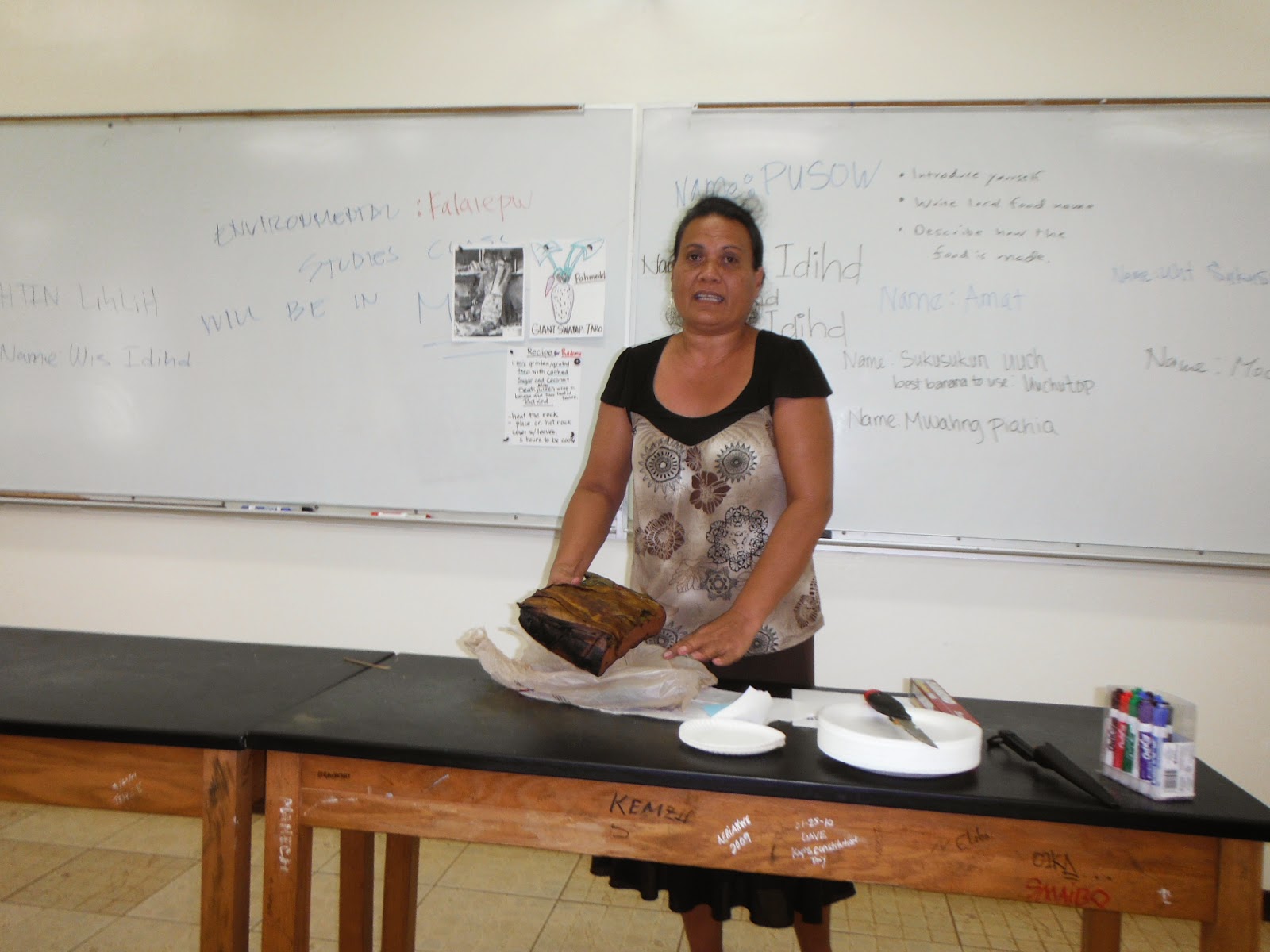 Lilina Etson prepared Mwoakillese rodima. Rodima is a giant swamp taro based dish. She cooked this rodima in the most traditional manner, using hot rocks - the ground uhm. 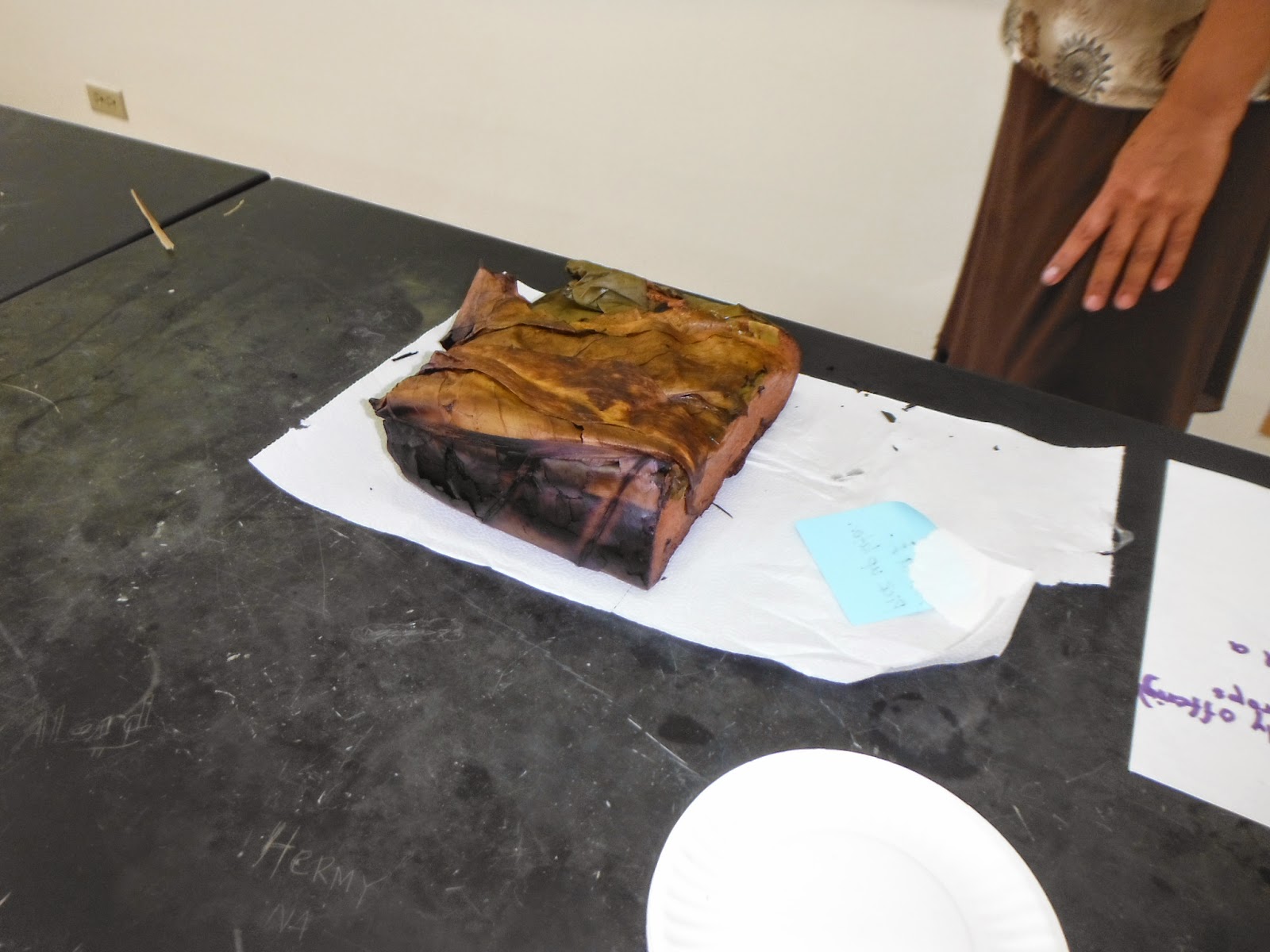 The red color comes from precooking the sugar until the sugar changes color, then adding that to the ground taro. 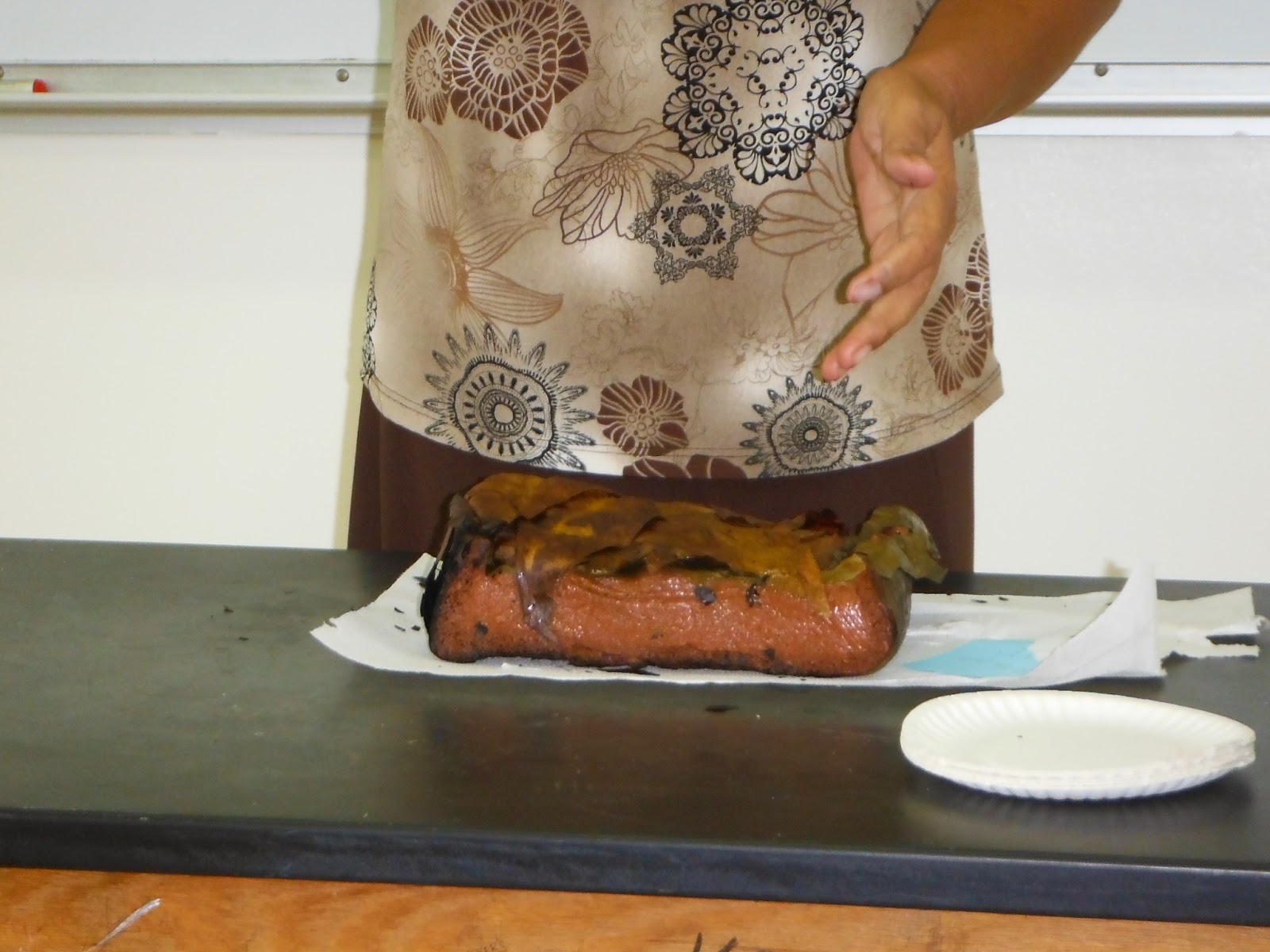 Lilina noted that she makes her rodima differently than other chefs. She kneads (kapali) the rodima longer to achieve a smoother consistency. The rodima that she makes bends rather than breaking as do unkneaded rodima. 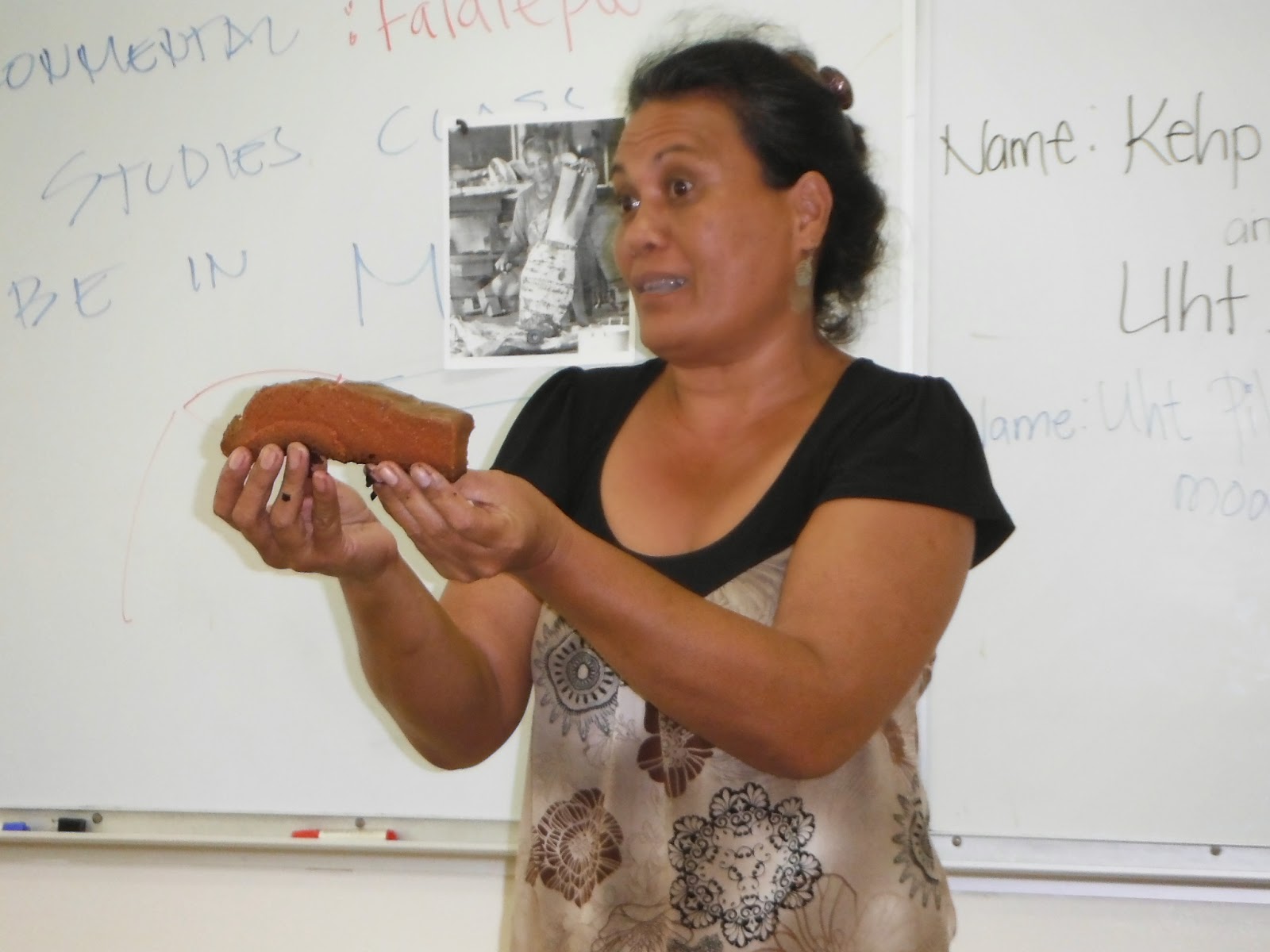 Lilina then demonstrated the extreme flexibility of her rodima. I might add that the flavor and texture were one of the best rodima I have had.

Lilina noted that giant swamp taro is a very important plant for Mwokillese. Even after a typhoon, the taro can be dug up and eaten. The taro is used during festivals such as nopwei to honor their high chief. If you are going to a party and want to "brag", you bring a giant swamp taro. This plant is also brought to funerals. If you are not a Mwokillese, you can just bring a bag of rice and then run away and hide. If you are to be considered a Mwokillese man, you have to bring giant swamp taro. Given a choice between yam and taro, Mwokillese will choose the taro. 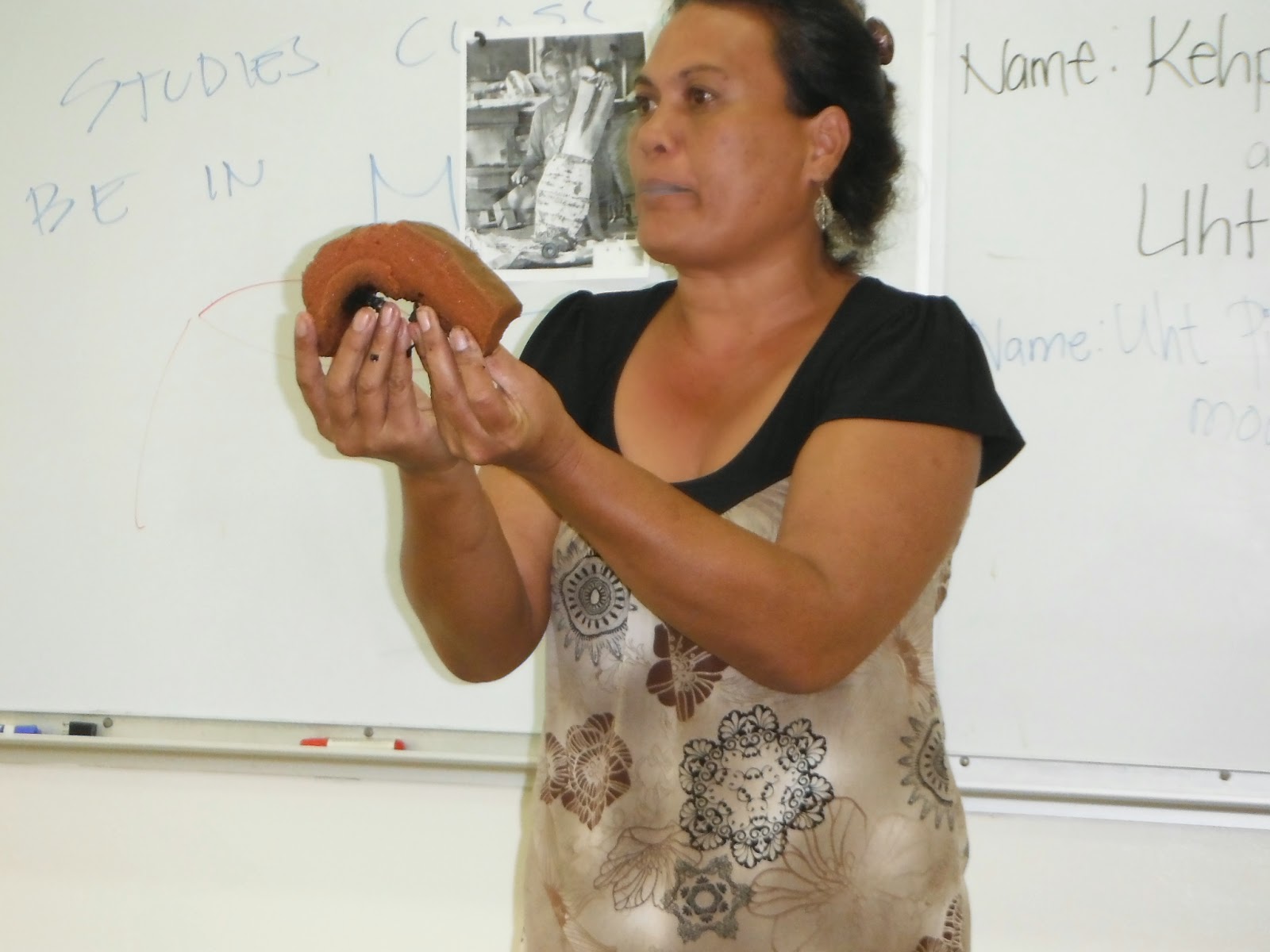 The even smoothness of the rodima is not a characteristic of the related rotama dish on Pohnpei. There were two leaf layers, an outer layer of giant taro leaves, apparently shiny side in, and an inner layer of banana leaves. 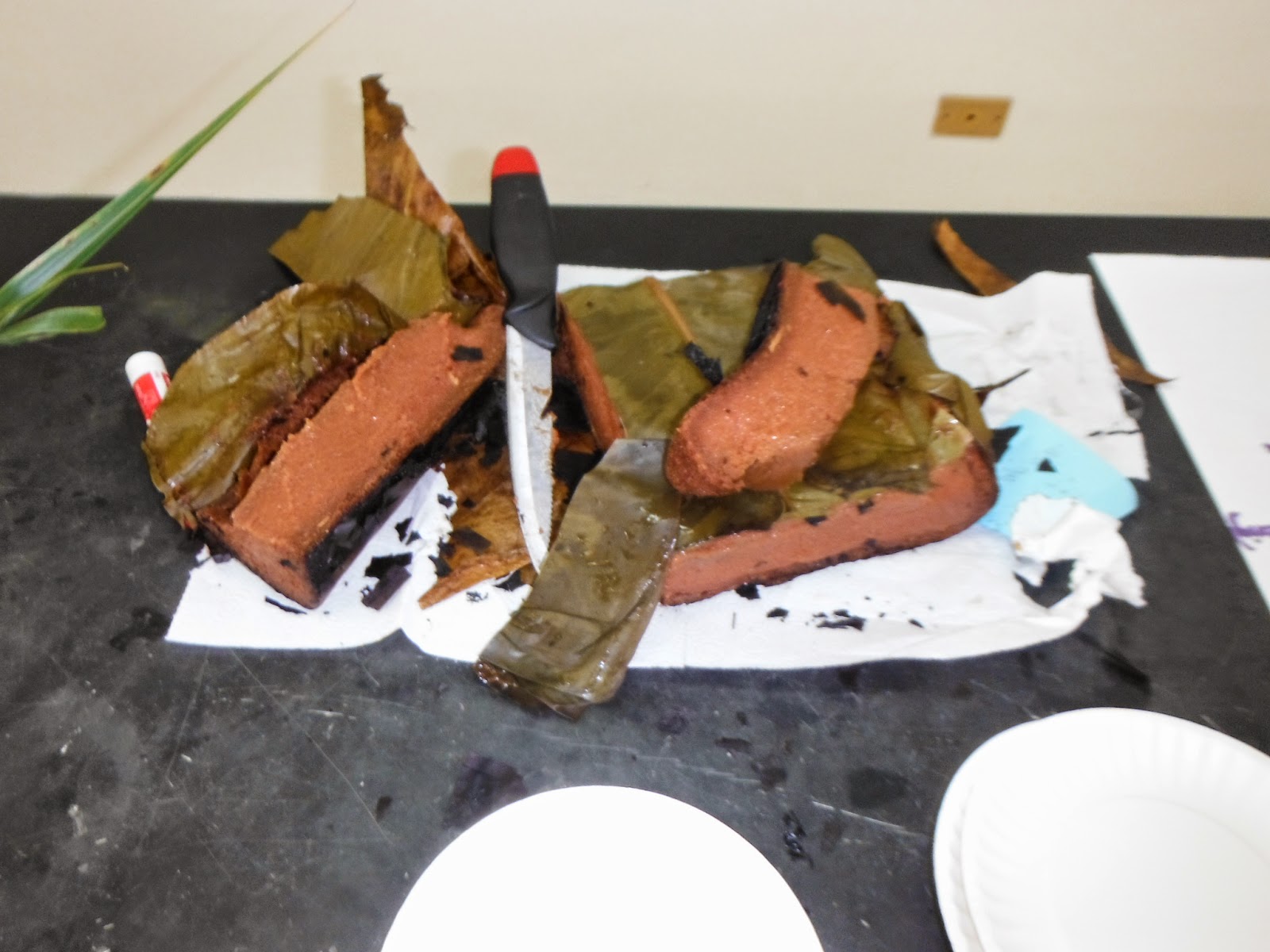 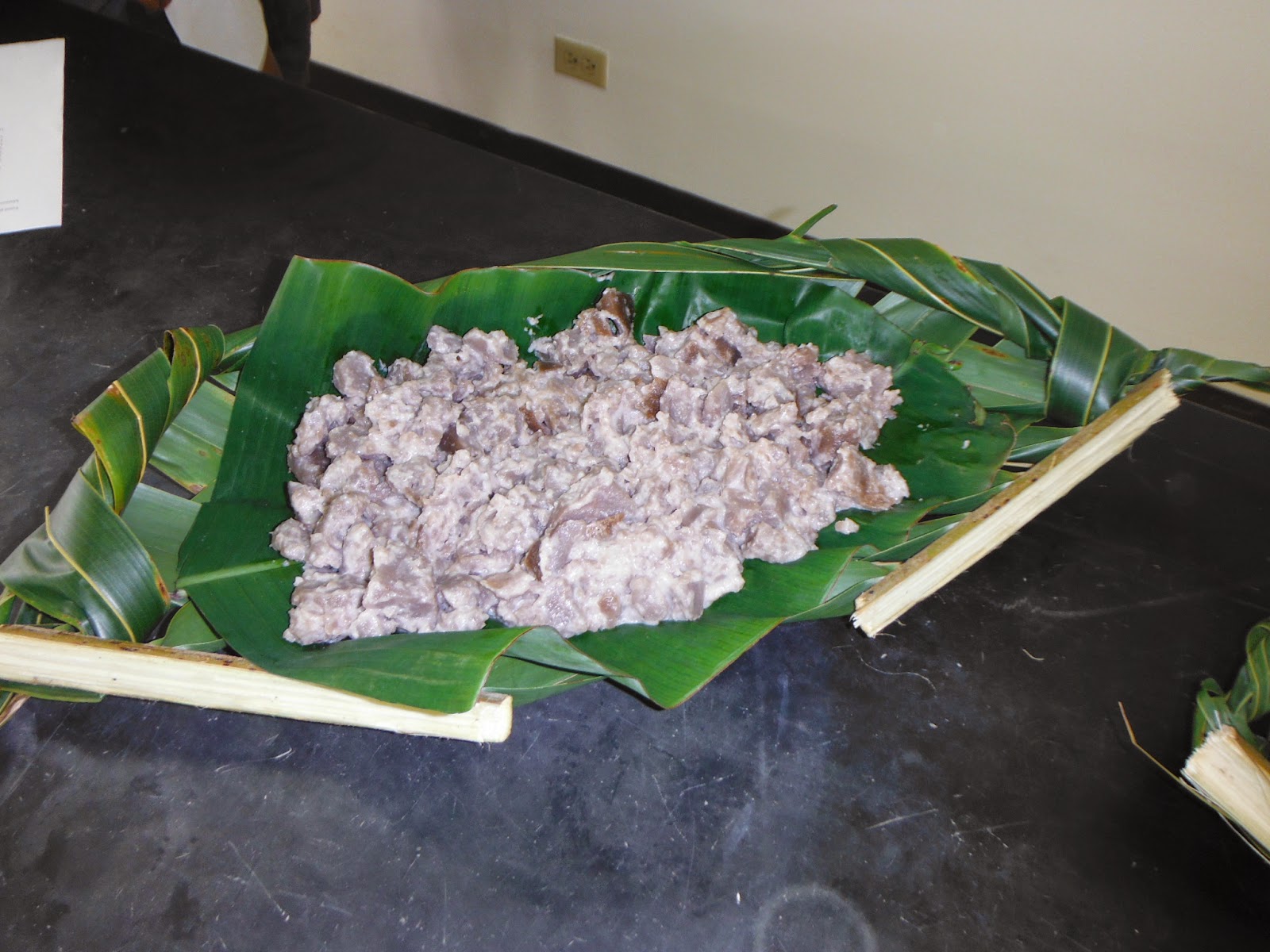 Franson Simeon and Lina Lawrence presents rohtamahn kehp (their spelling), a variation on the taro dish presented by Lilina. The yams are ground, sugar added, put in leaves, and boiled. Coconut milk is mixed into the cooked ground yams. 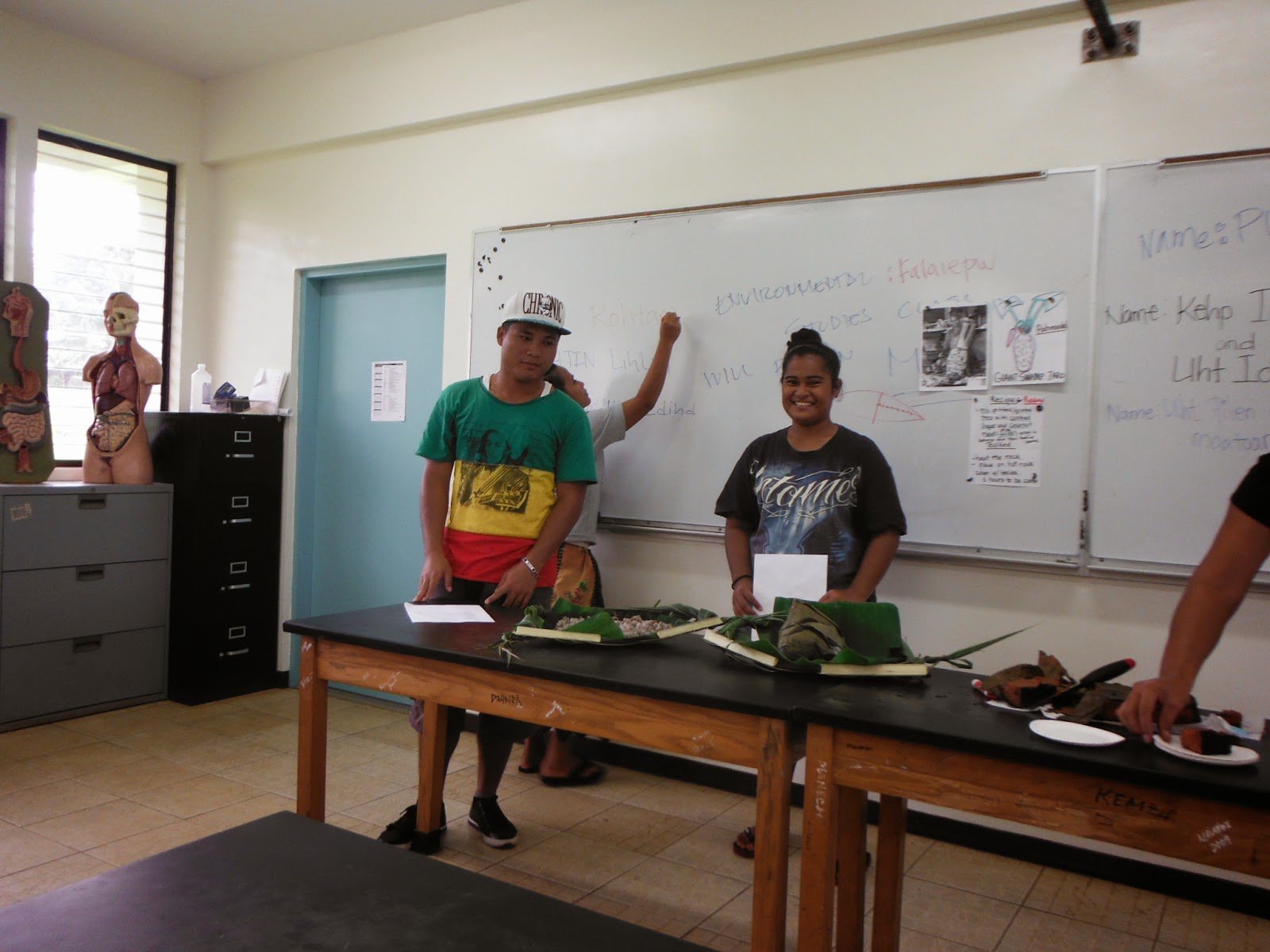