March 10, 2015
To introduce waves and their morphology, I again turned to the RipStik. I opted to use the uphill between the south faculty building and the A/B buildings. Once track can be faintly seen below, but I forgot to time the run, so I had to make a second run. 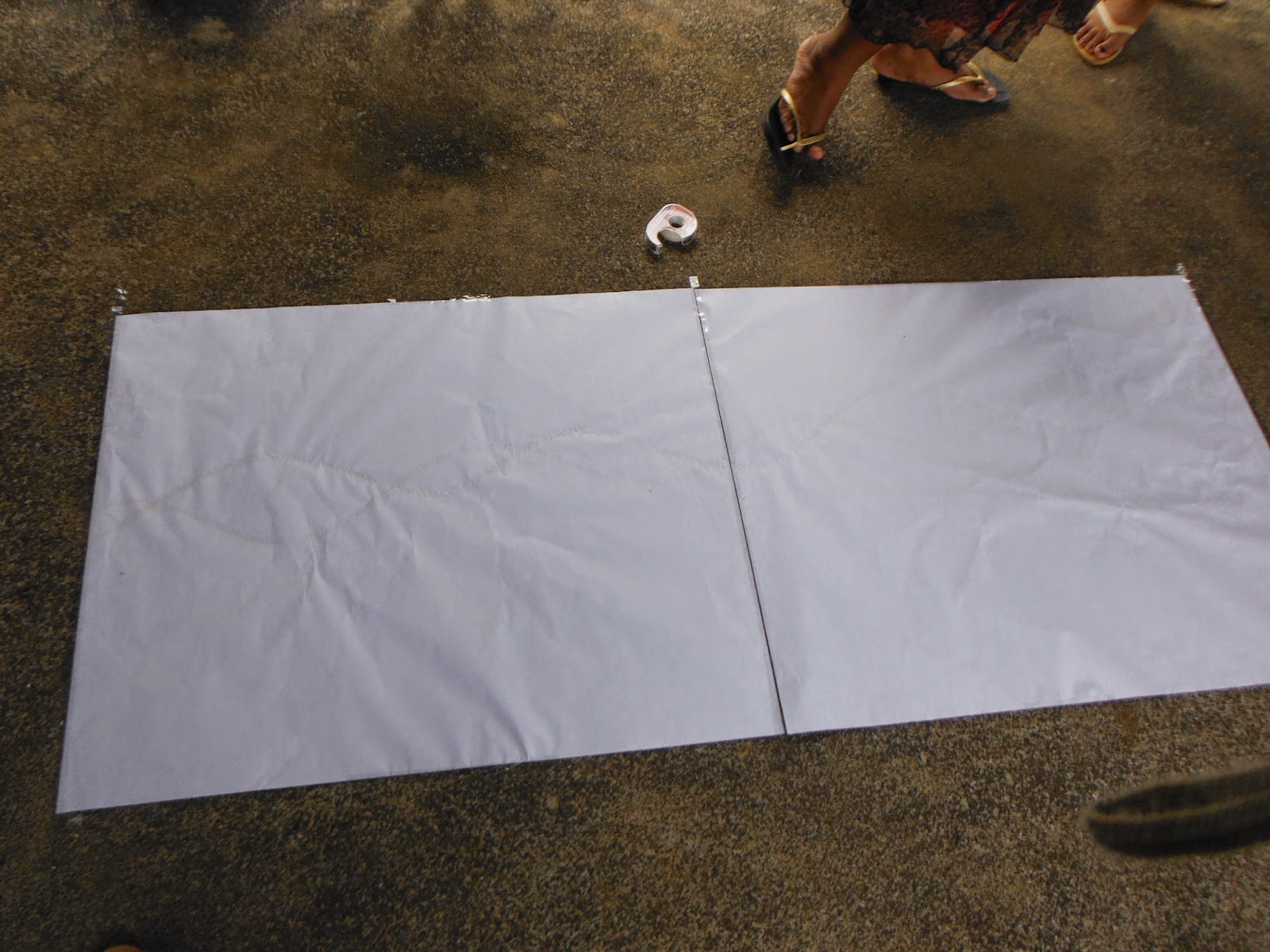 The second run had to be squeezed over onto the right side of the paper. 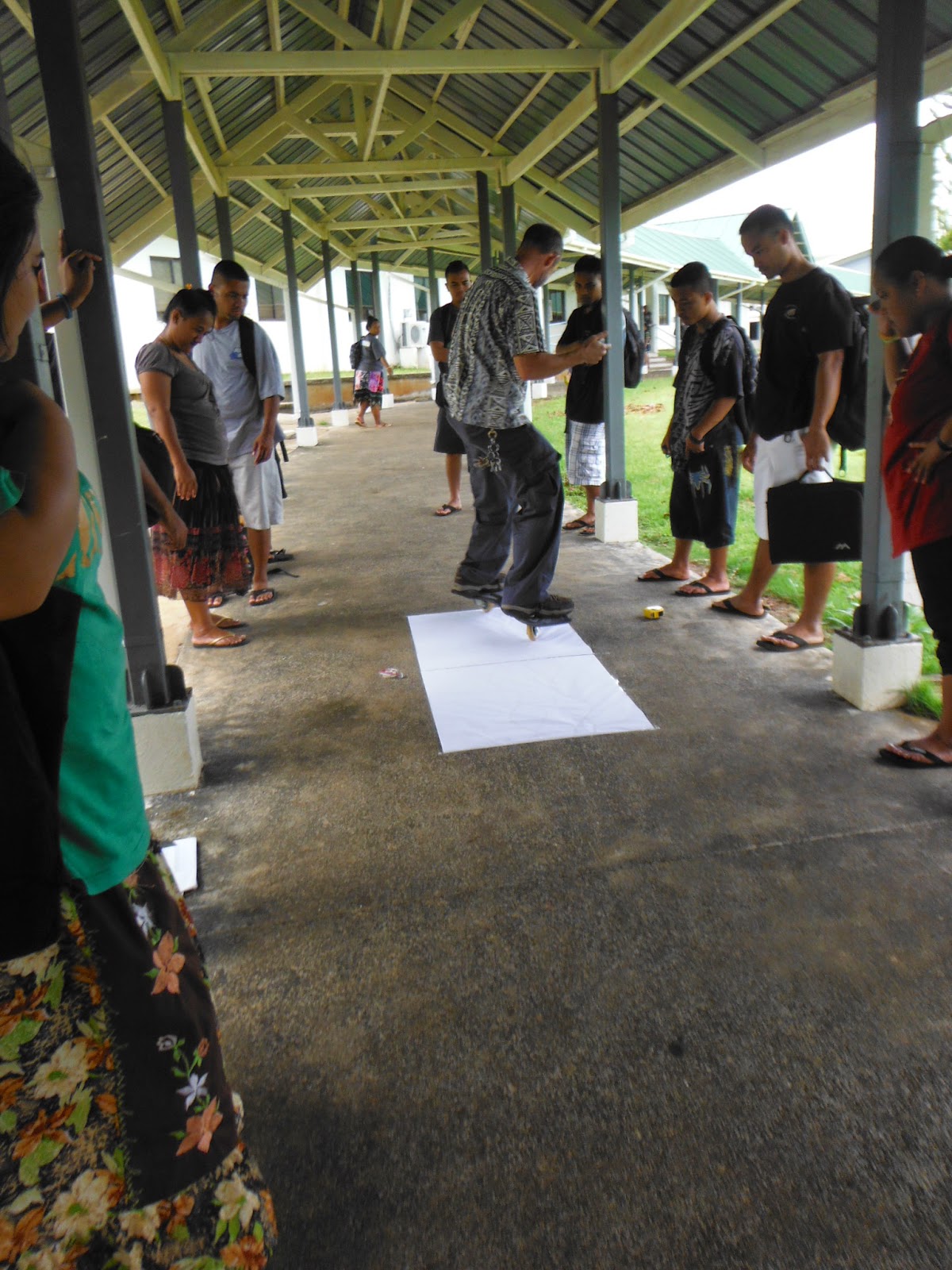 Out on the sidewalk no one is falling asleep on their desk. I have far more attention that I could get inside a classroom. 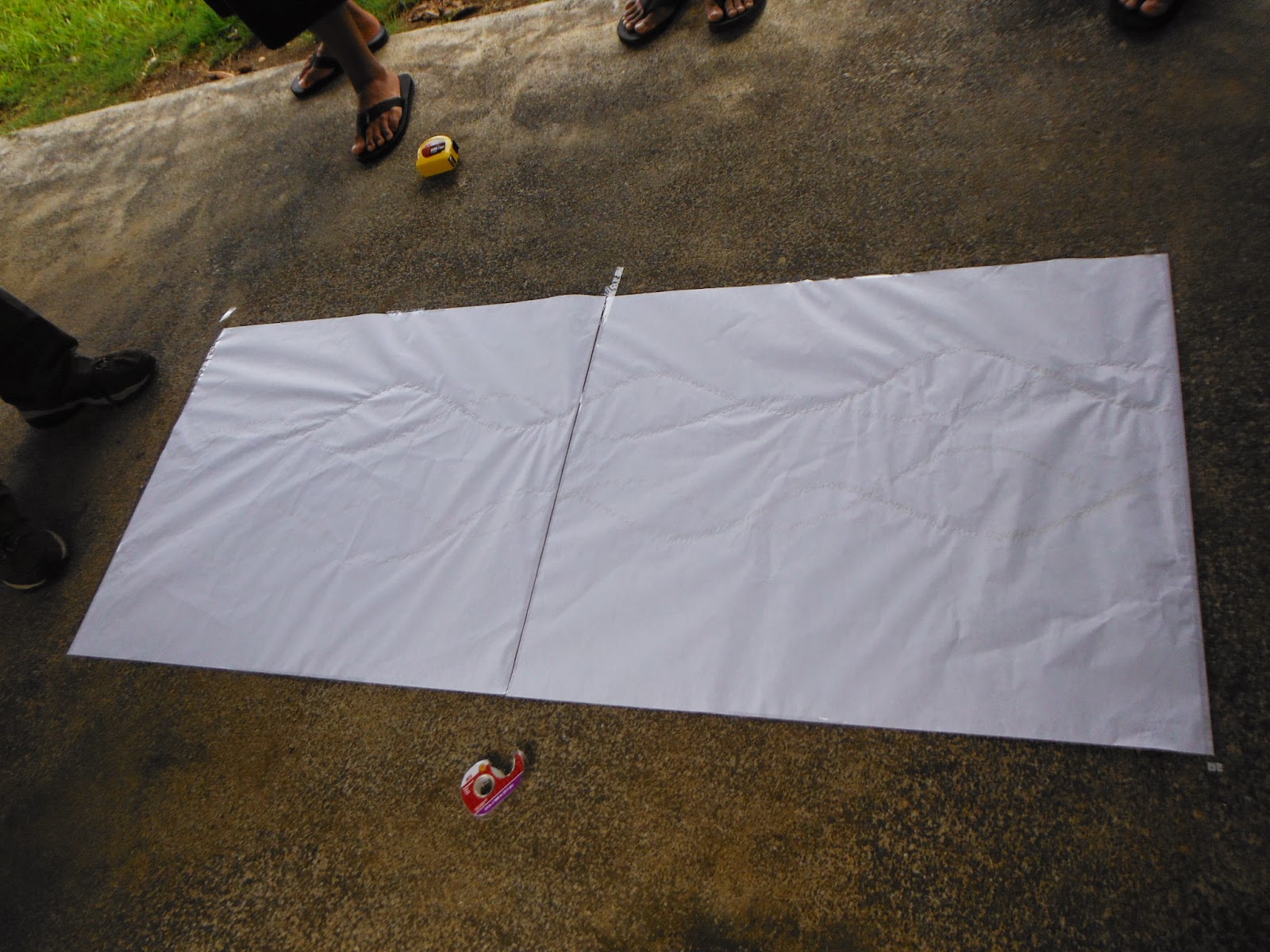 Two tracks are down, sinusoidal waves are evident. 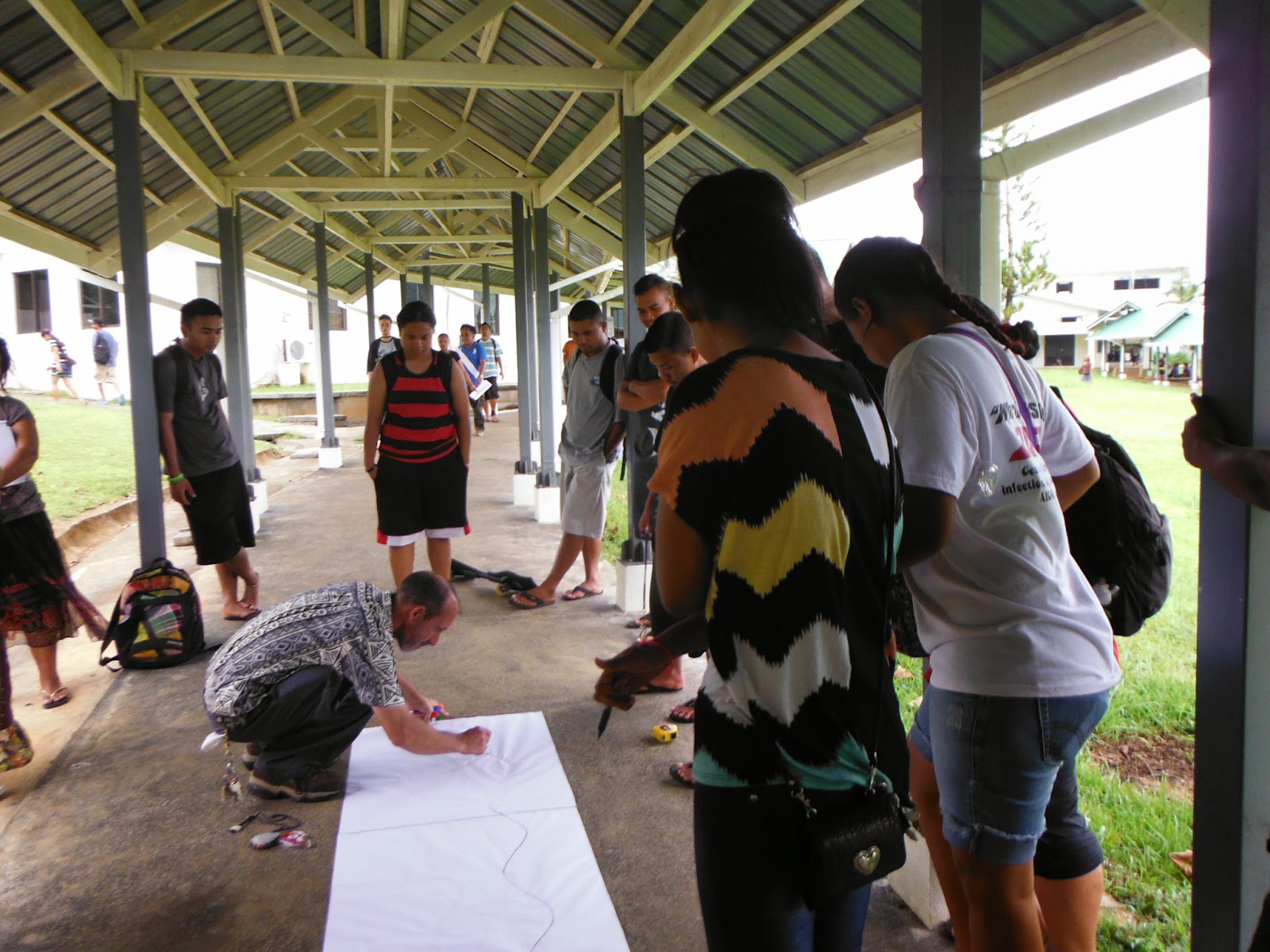 I traced the better looking sine curve and began by asking how many waves were on the paper. The students counted crests and declared there to be four waves, which was correct. This led naturally to the understanding that a crest and a trough constituted a single wave. 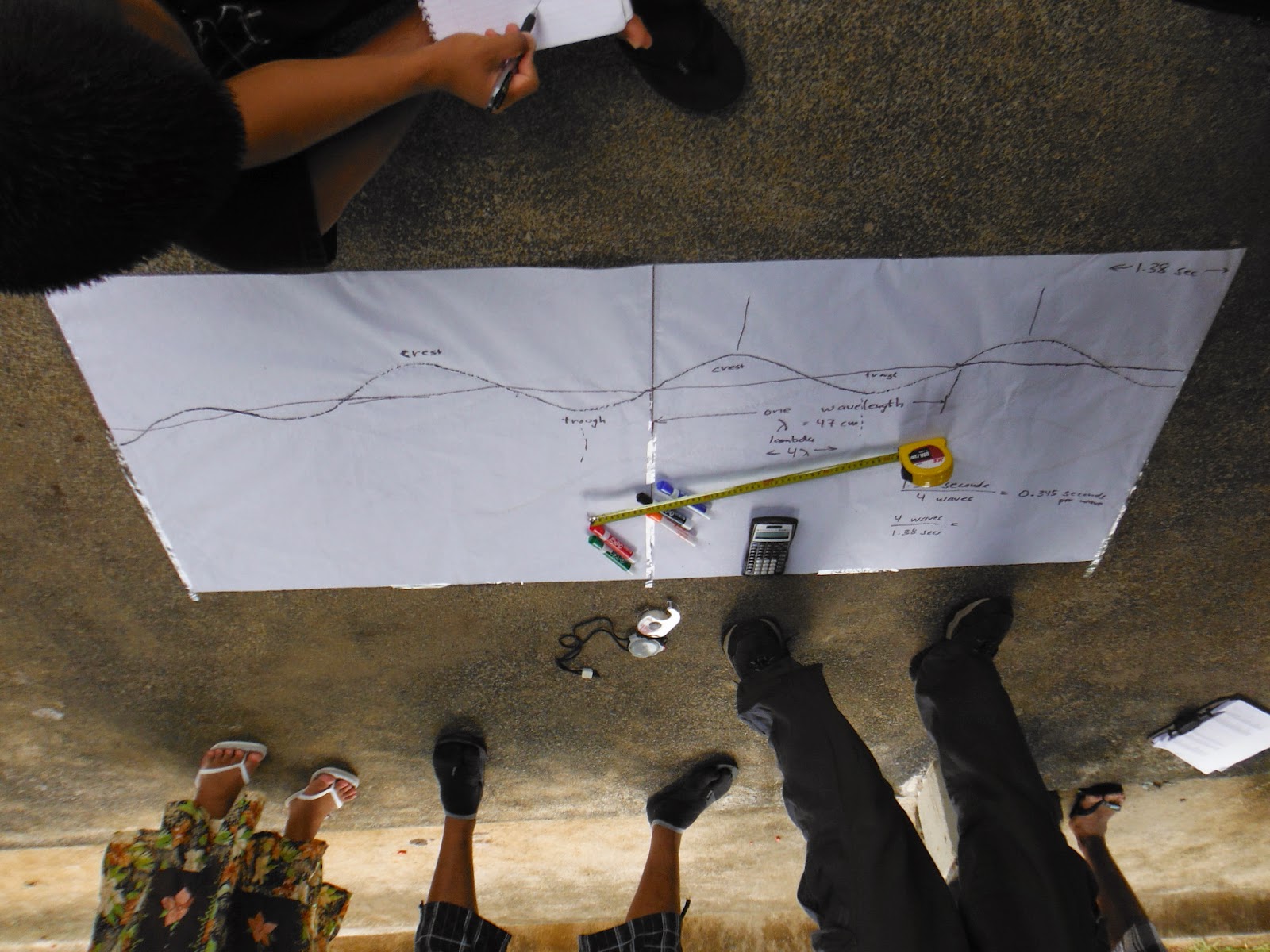 The wavelength for one wave was measured to be 47 cm. The four waves were laid down in 1.38 seconds with an amplitude of 6 cm. That yielded a period of 0.345 seconds per wave, and a frequency of 2.90 Hertz. I also calculated the wave speed at 136 cm/s based on the wavelength and frequency. Note that I measured a single wavelength on the paper (47 cm). The four waves were not of equal wavelength. I was slowing down uphill. This is somewhat problematic as it causes complications if one wants to show that the board speed (165 cm/1.38 s = 121 cm/s) is the same as the wave speed. That could only be shown if the wavelength were 41.25 cm, one fourth of the 165 cm long paper.

Note too I had to explain to the students to move the small piece of a wave on the extreme left above to the wave on the right side of the paper to get four whole wavelengths. I like having four waves on the paper, but the uphill deceleration is an issue. Downhill or flat I might get a more consistent wave length, but I know I would have fewer waves to work with as well. A big roll of kraft paper would be nice, but not available here.