February 26, 2015
Part two of the ethnobotany class healing plant presentations. Lina Lawrence of Pohnpei covered the use of spider lily, Crinum asiaticum, to protect wounds from flies. This use is covered on page 253 of Balick's Ethnobotany of Pohnpei. 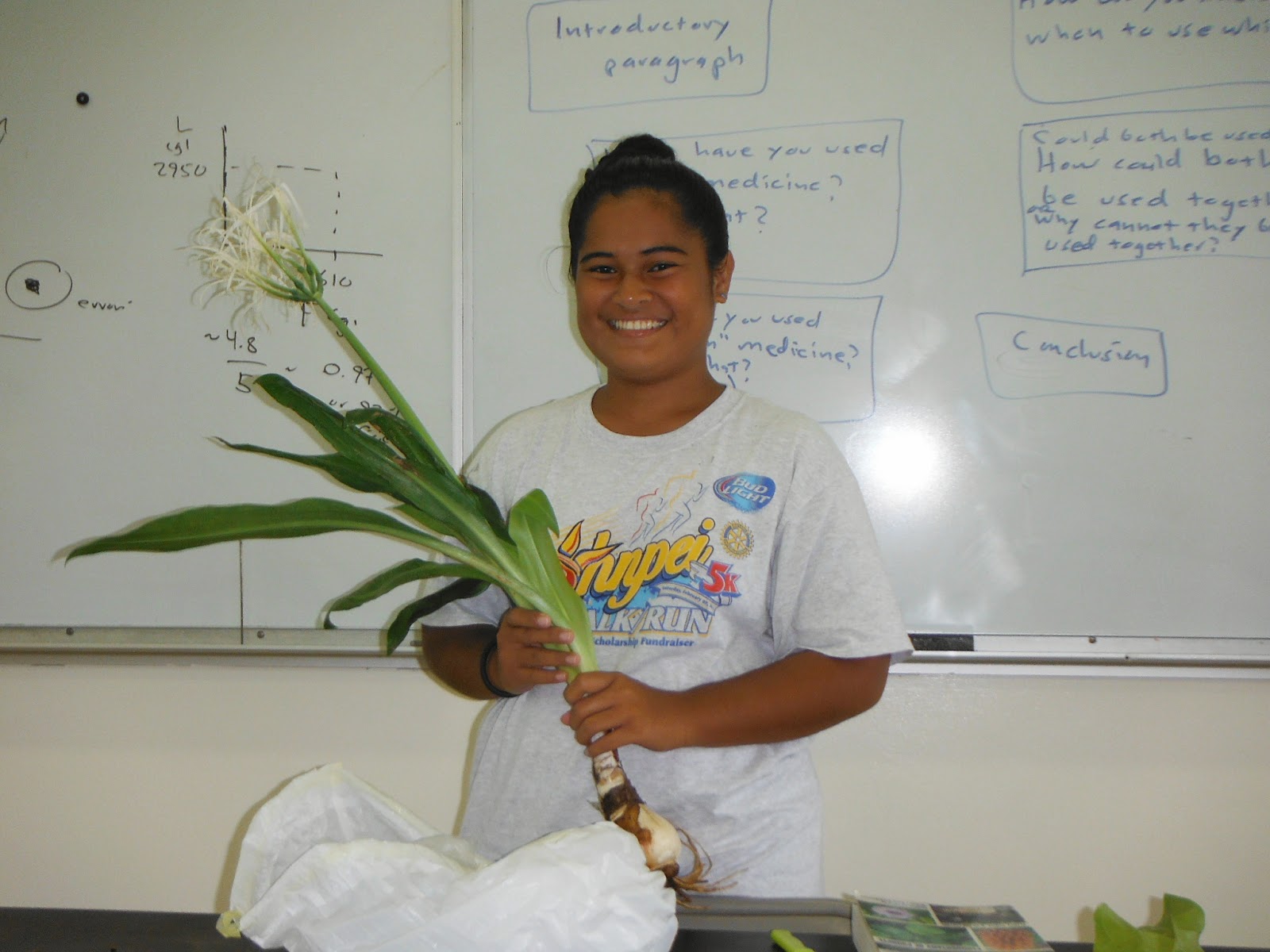 As cultural knowledge of their plants is lost, students are likely to turn more often to sources such as Balick's excellent text for material. A decade ago students could ask an elder for something to share with the class. Today the knowledge continues to erode and be lost. 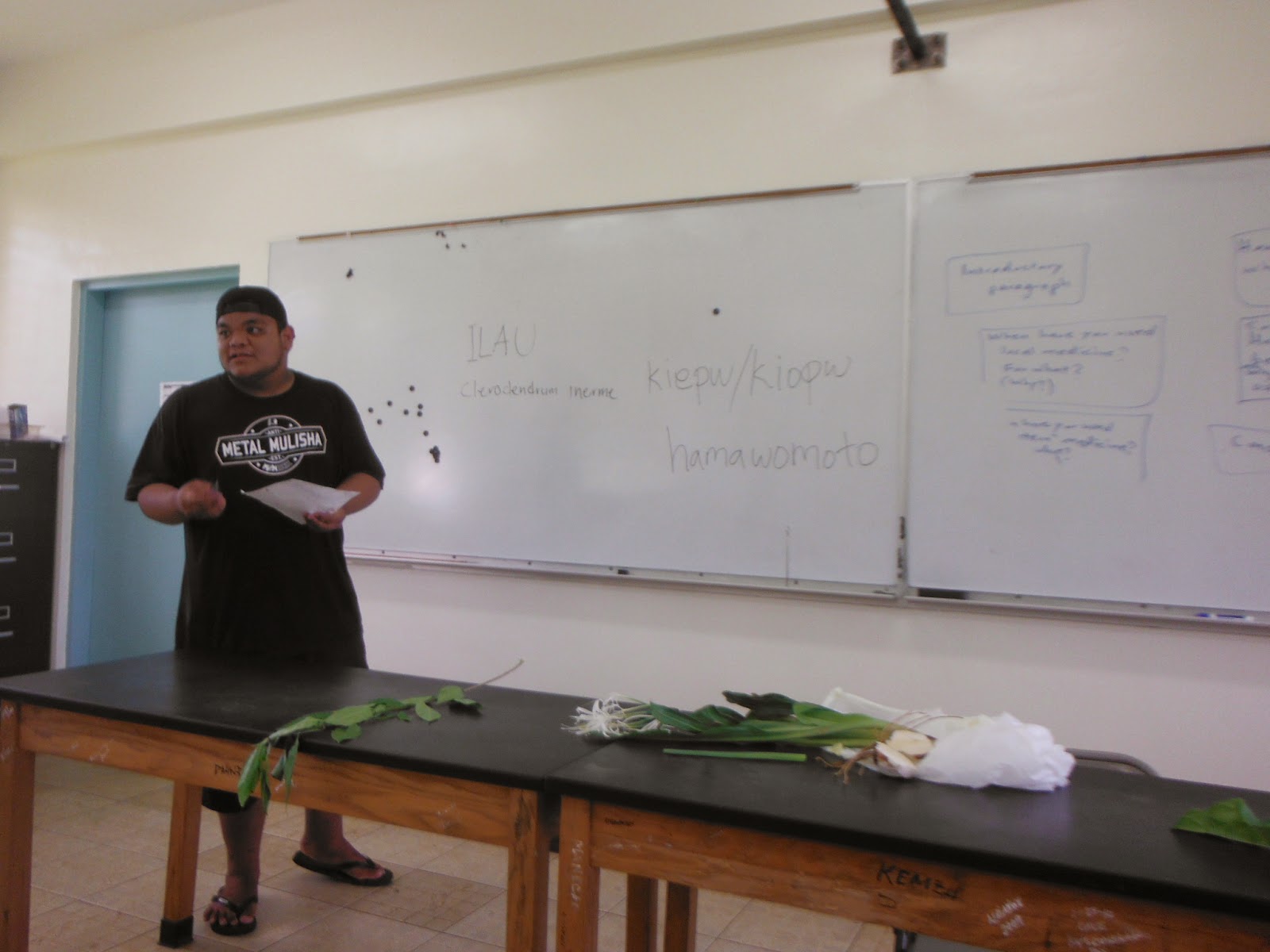 Gordon Loyola of Pohnpei covered the use of ilau, Clerodendrum inerme, to treat pink eye. The juice of the leaf is squeezed into the eye to relief the condition. 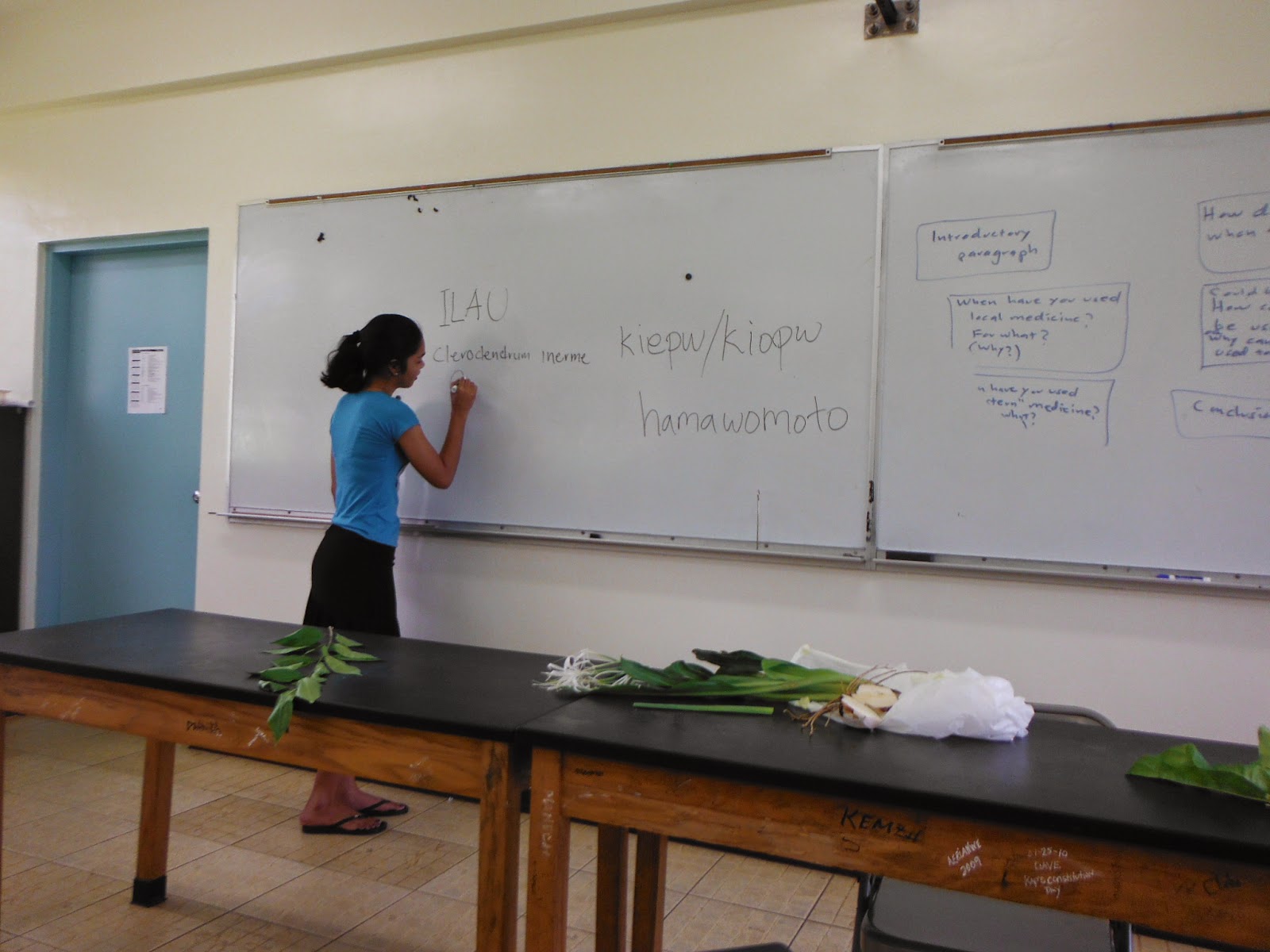 Patty Mario of Chuuk spoke of the use of "rho" - roasted copra - to treat facial rashes. Initially she refers to the rash as not being related to a boil, but later she used the word boil. Unclear the exact nature of the rash which rho treats. 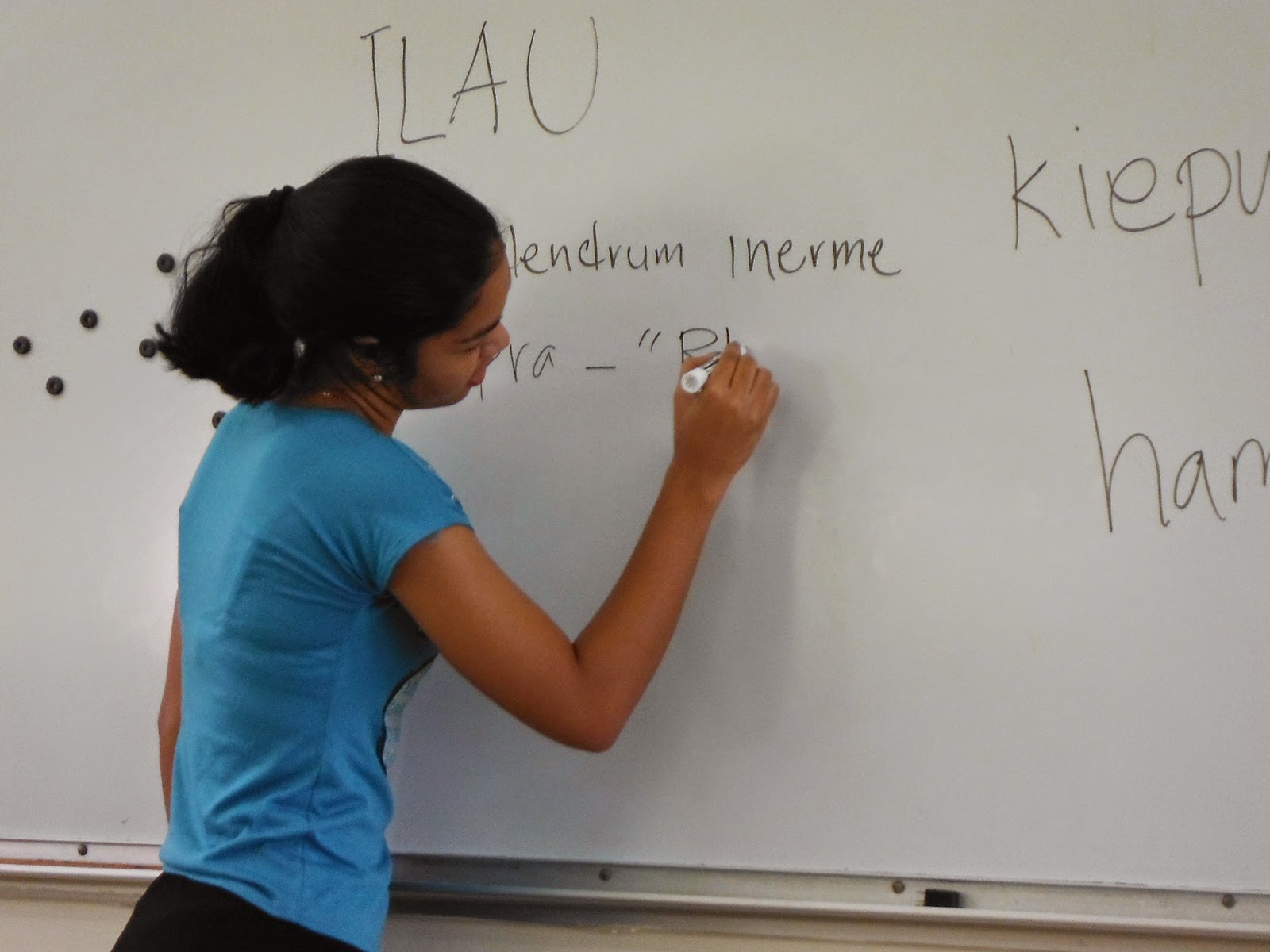 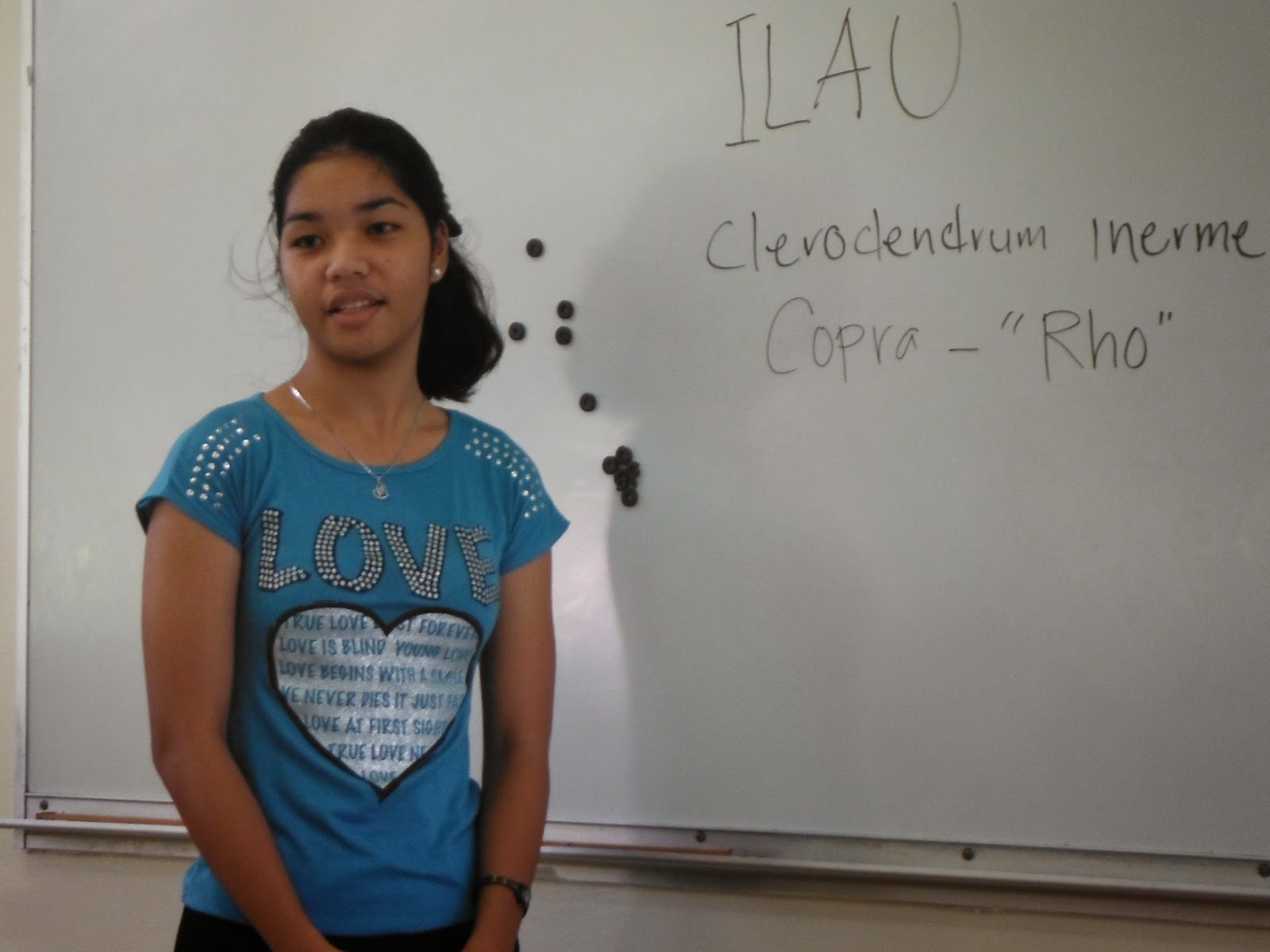 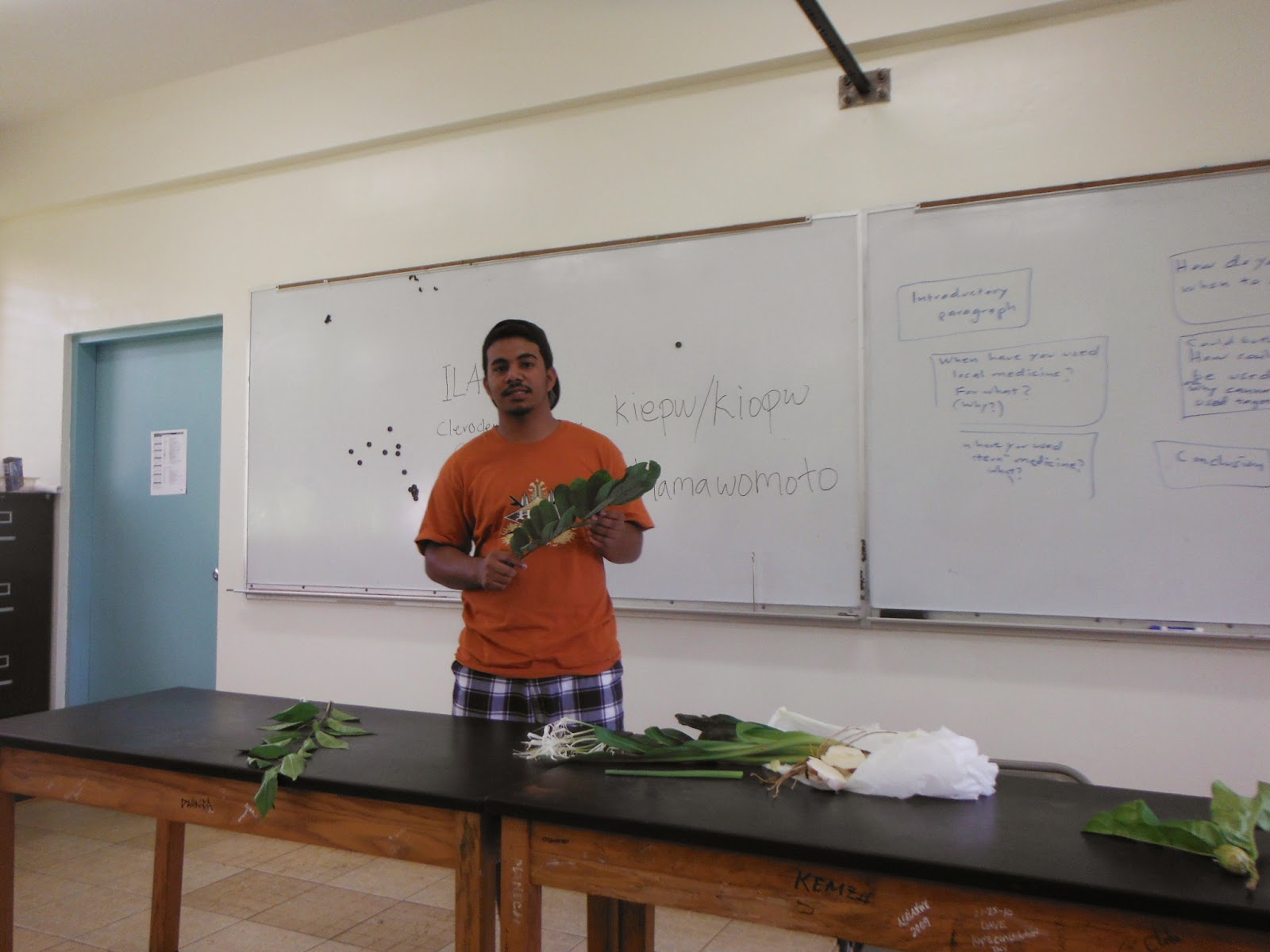 Brian Mwarike of Chuuk covered the use of arakak, Senna alata, for a skin rash. He could not specify which type of rash the plant is to be used upon. This led to a discussion of specificity. Senna alata is used on fungal rashes, at least that was the traditional use and the use in which the plant seems to be most effective. That said, as knowledge is lost, the specific illness is also lost. Soon the plant is used to treat any and all rashes, whether or not the plant is efficacious in that application.

The wearing of wet clothing can cause me to develop these moderately large red rashes on my skin. The rubbing of young Senna alata leaves into the rash eliminates the rash in a single treatment. The rubbing is rough and mildy painful, but I have only ever needed one treatment. 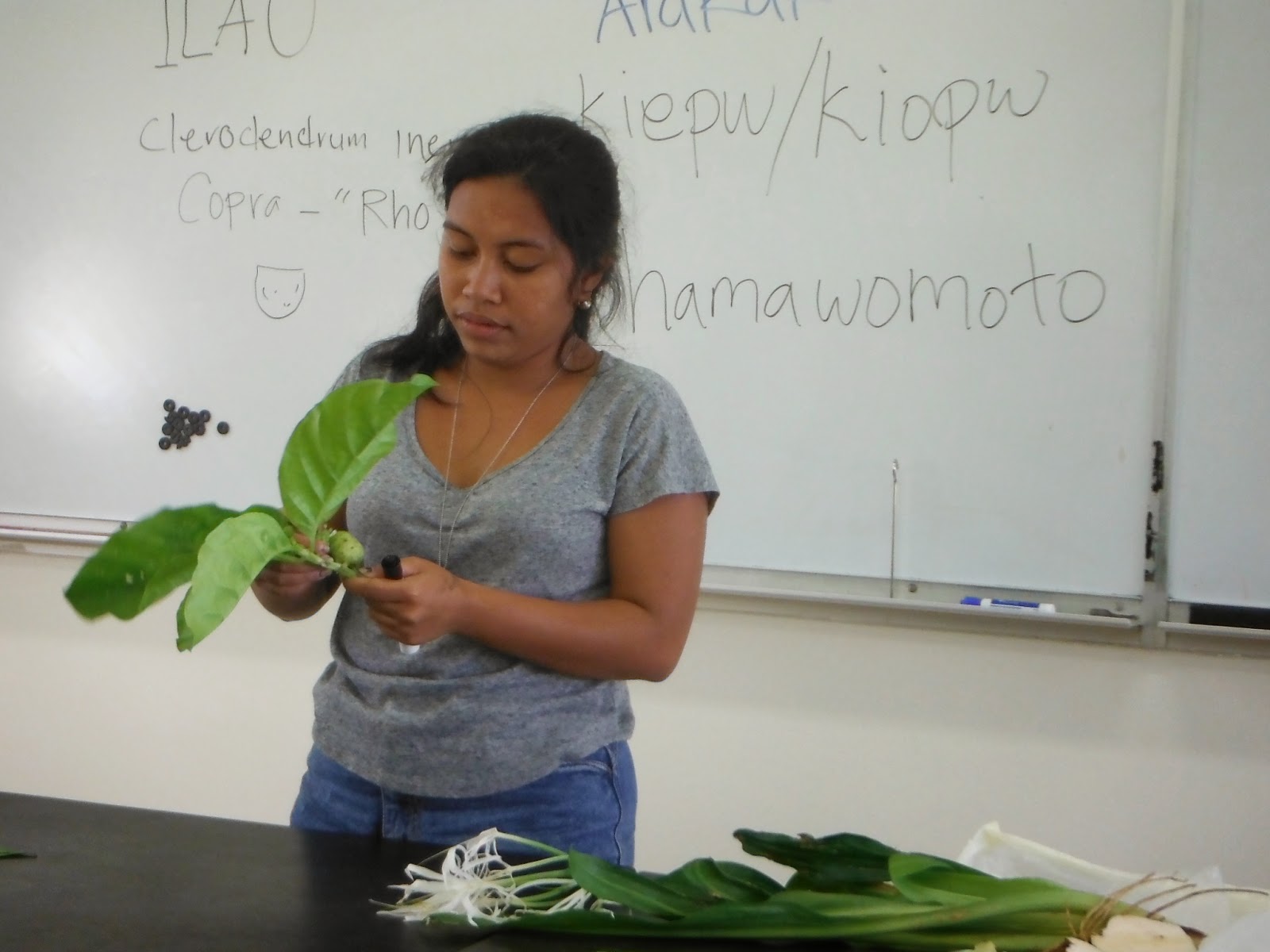 Lerina Nena covered the use of the flowering fruit of ii (Kosraean), weipwul (Pohnpeian), in the treatment of a stomach ache. Two very young fruit, still bearing flowers, are eaten raw. 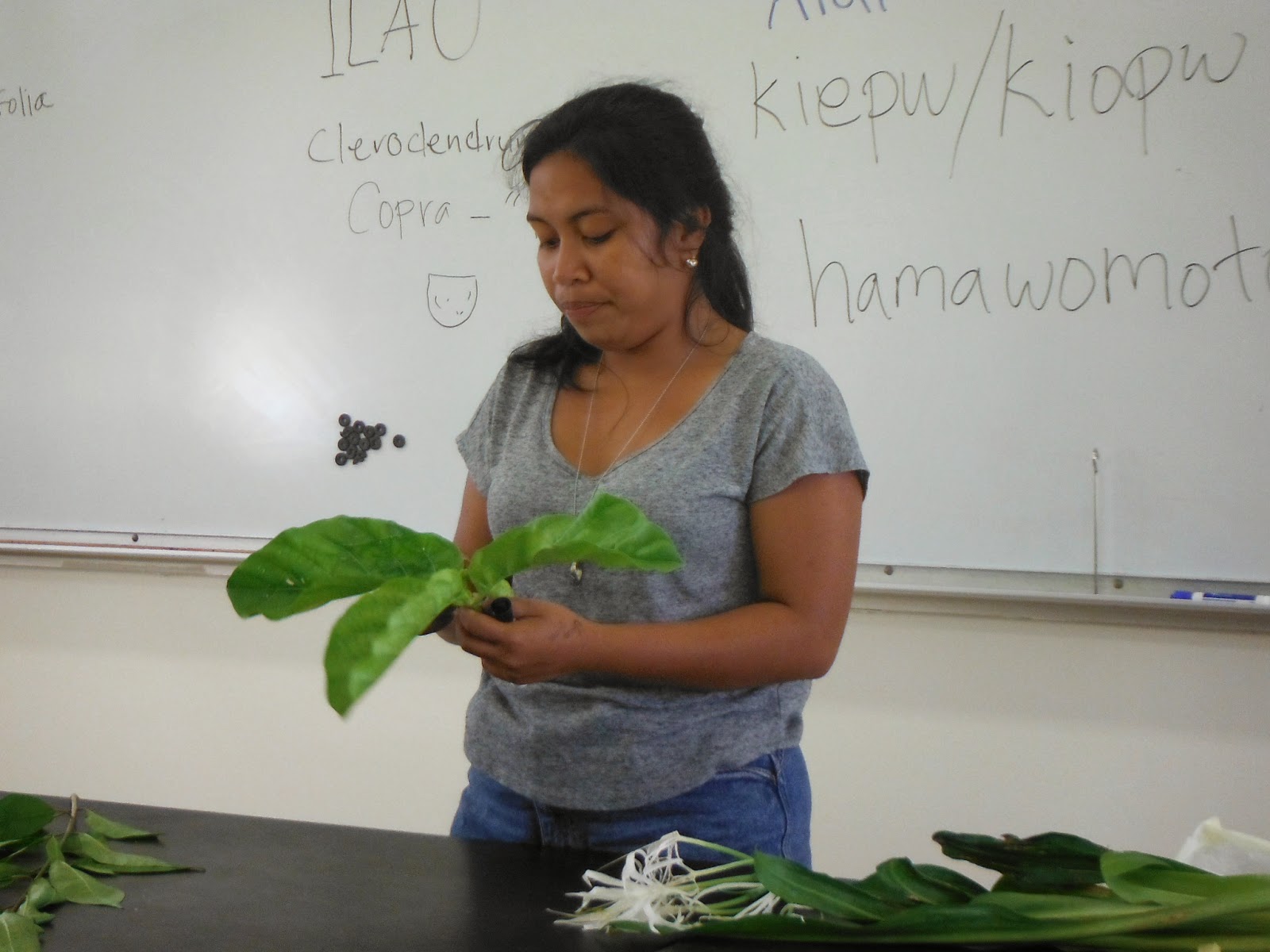 Petery Peter covered the use of liwadawad marer, Centella asiatica, in the treatment of "fright" in babies. Startling a baby, or anything that leaves a baby frightened, can lead to illness in the baby on Pohnpei and in Mwoakilloa. C. asiatica is a treatment for this fright syndrome. Petery noted the use is to put the leaves under the baby's pillow. That did not sound quite right to me. The traditional treatment is more along the lines of crushing four leaves and squeezing the juice onto the fontanelle of the baby. Given the nature of the fontanelle and the thinness of the baby's skin, in theory the juice could be absorbed into the blood stream and have some pharmaceutical effect. 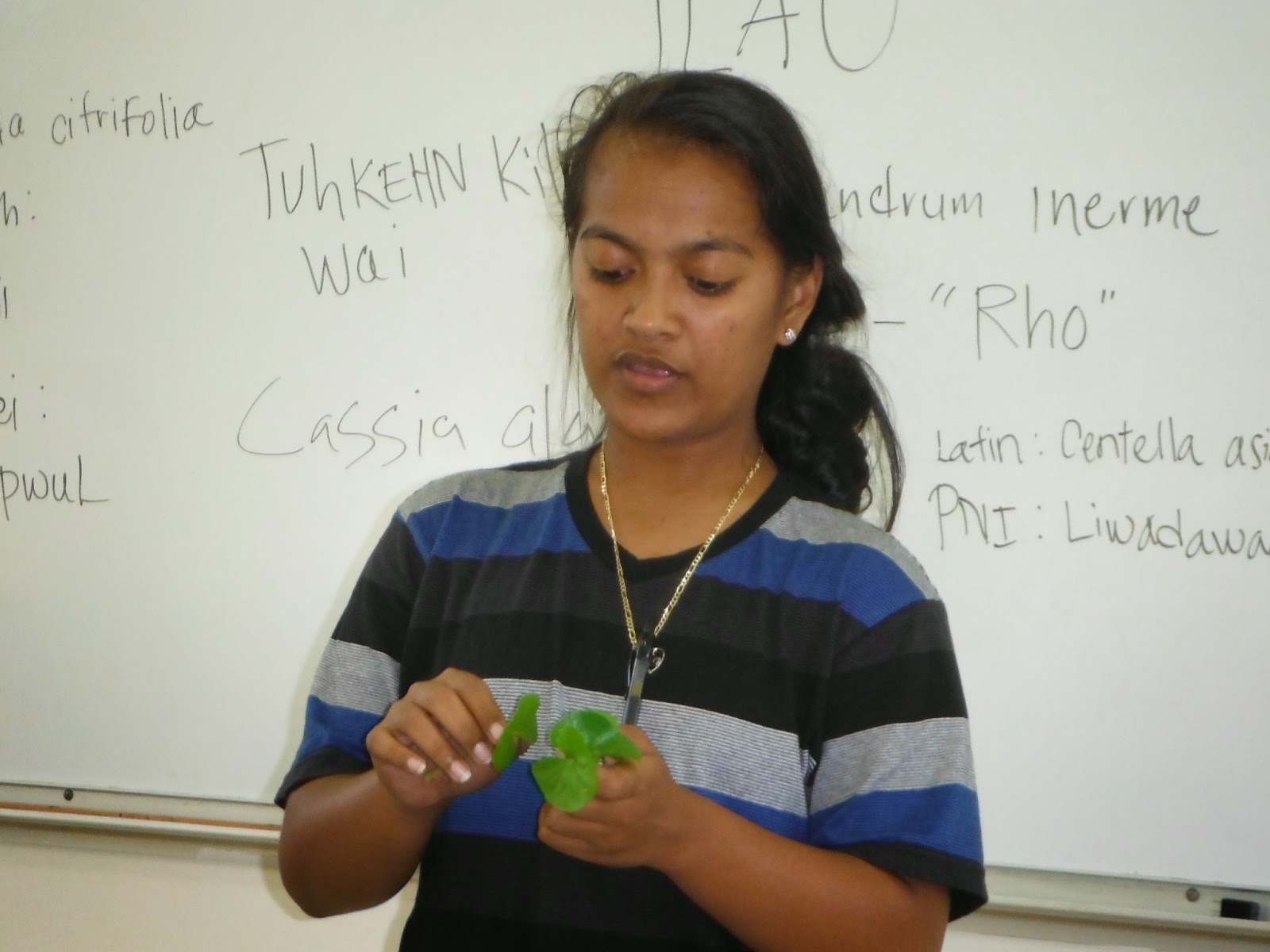 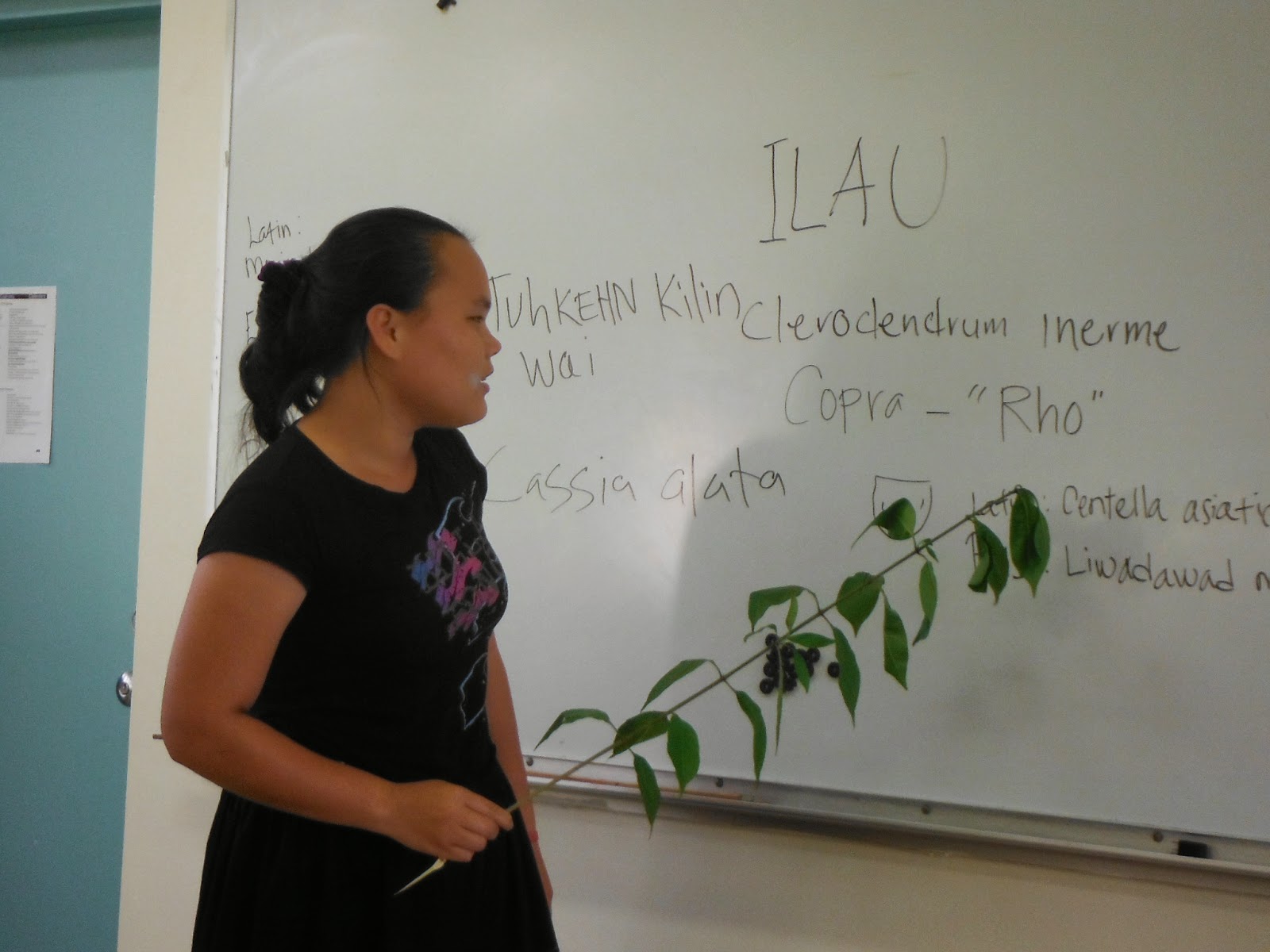 Stephanie Usiel covers a use of Clerodendrum inerme from Balick's text - a steam bath with the plant in the hot water as a treatment for a head cold. 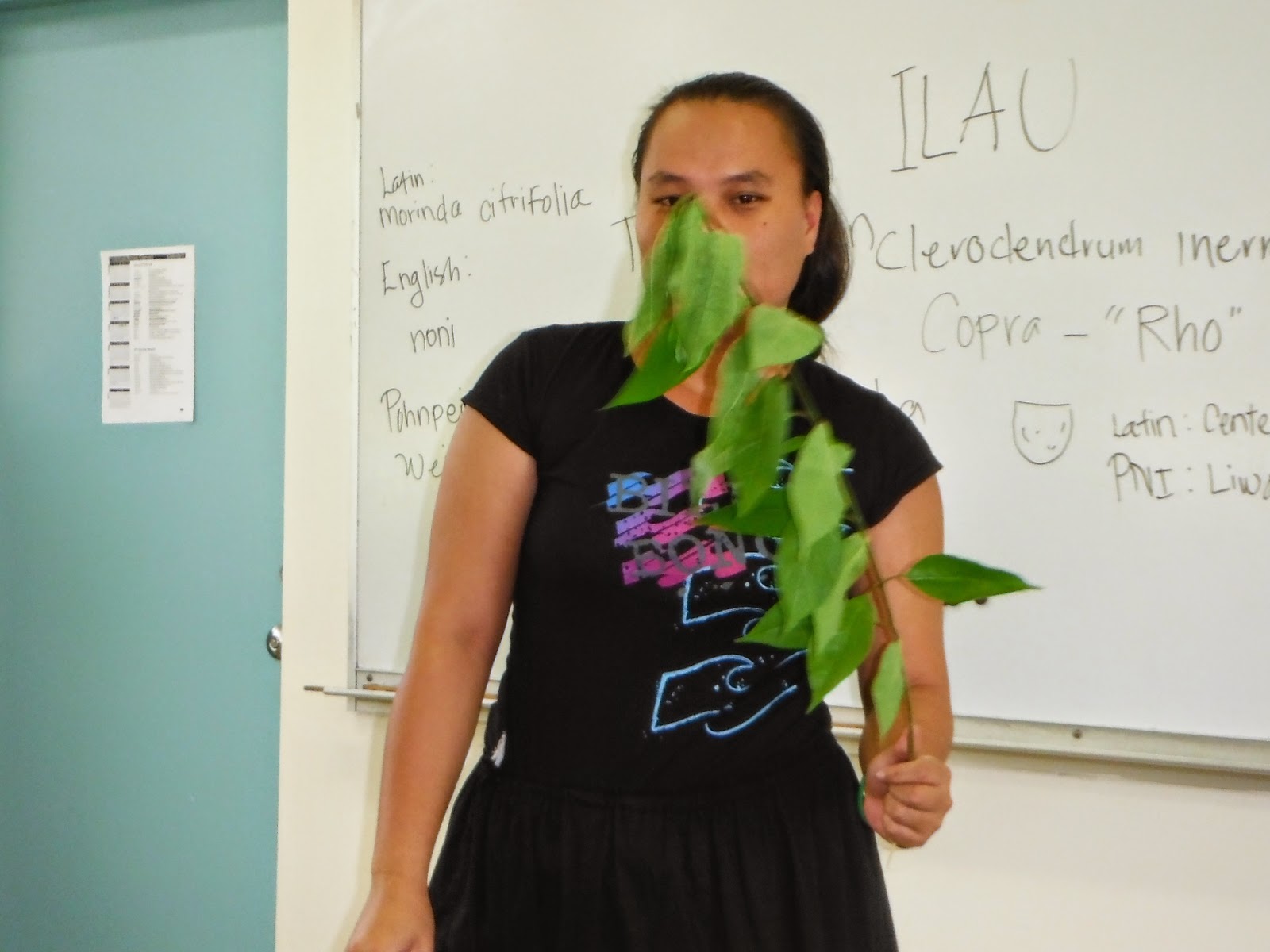 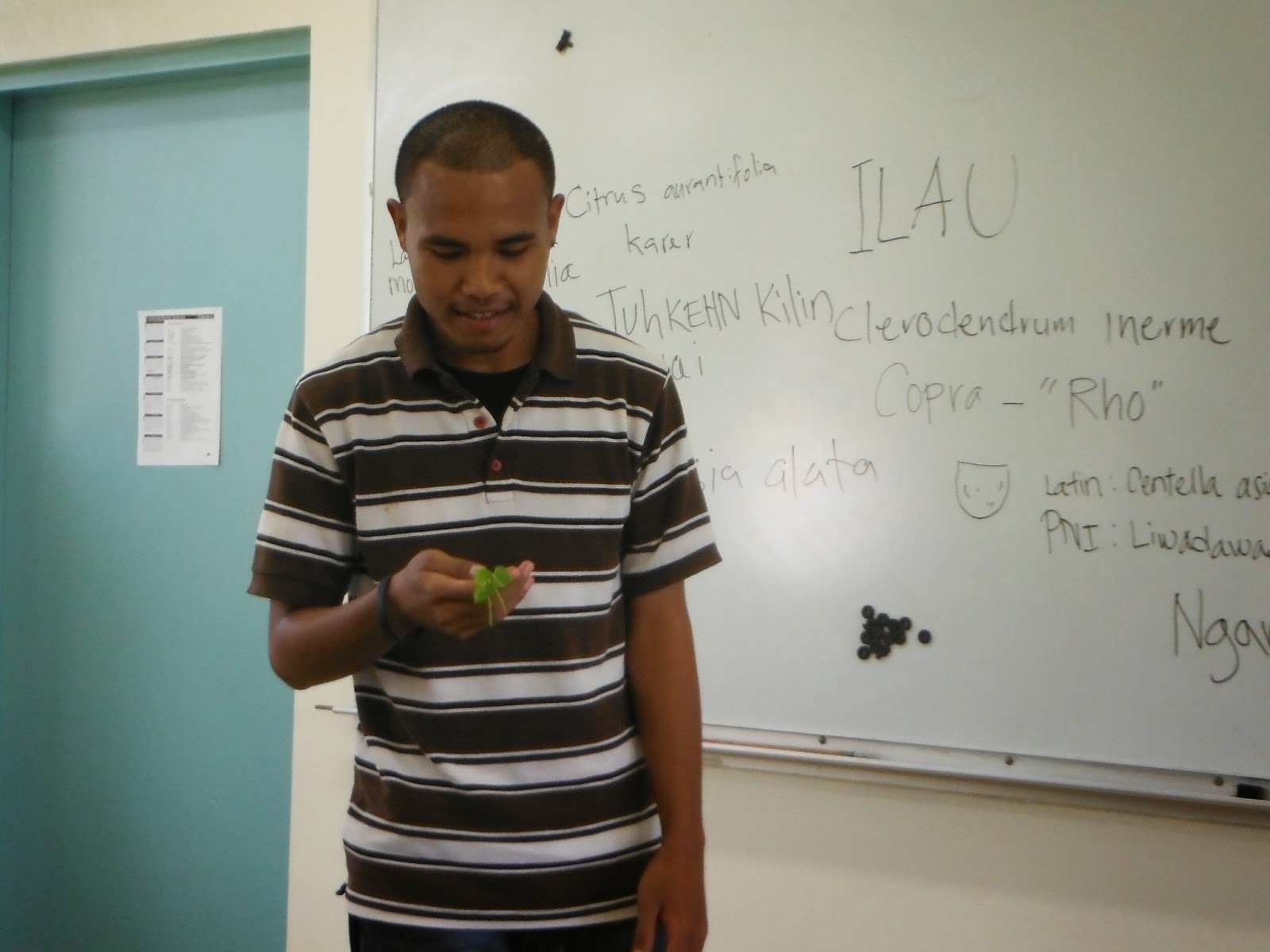 John Yilbuw of Yap brought in a species of Peperomia, possibly Peperomia pellucida, which in Yapese is called ngarar.Pohnpeians refer to the plant as sekewenleng and also know the plant to be medicinal. My notes are incomplete, but my recollection is that the plant is used to staunch bleeding. 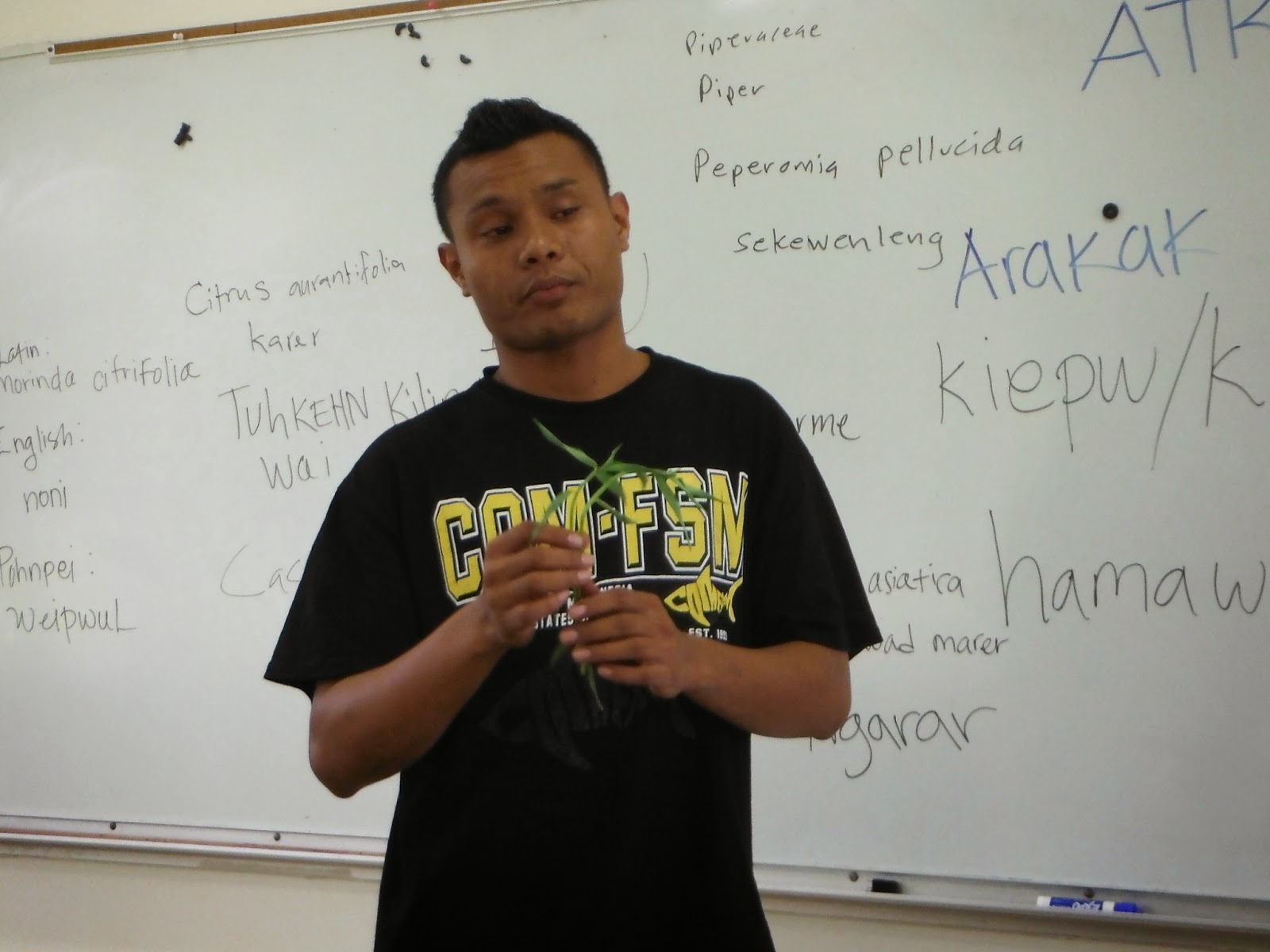 Sebastian of Yap brought in a plant called "atraw" that is used along with coconut oil to treat joint pain via massaging the plant and oil around the joint area.
ethnobotany