January 20, 2015
A convenience sample survey of social media and stimulant preferences was given to 69 students in three sections of MS 150 Statistics at the College of Micronesia-FSM. 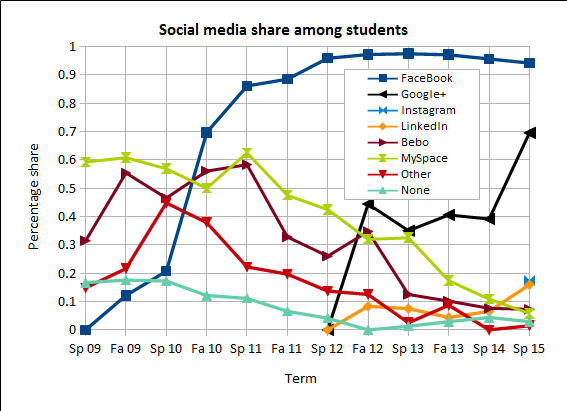 FaceBook continued its dominant position among students surveyed, with 65 of 69 students having a membership in FaceBook. Two of the four non-FaceBook using students noted that they were not members of any social media web site. The other two listed membership in Google Plus.

In the spring 2014 only one student was using Instagram, by spring 2015 this number had risen to 15. The rise of Instagram is in part a product of the increasing penetration of smart phones into the student population. Thirty-eight (57%) of sixty-seven students reported accessing social media primarily via their cell phone. The increasing rates of social media access via cell phone provide impetus for the use of learning management systems that are mobile friendly. The statistics course uses Schoology which has both Android and iOS apps. The student interface to MyShark SIS should also be "mobile friendly" if at all possible.

Spring 2012 no student named Google+ in their responses. By fall 2012 thirty-two students listed Google+ membership. Since the initial uptake, usage had leveled off at around 40% . Spring 2015 membership jumped up to 70%. The dominant cell phone and pad platform here in Micronesia is Android, there may be a connection between increased use of Android platforms and Google+ membership.

FaceBook remains the social media place to be and to connect with students. As an anecdote, students who are accustomed to regularly managing their FaceBook presence appear to be better able to interact with learning management systems. FaceBook users are accustomed to keeping track of a username and password, navigating among screens with different functionalities, and making decisions on what to post. Students who do not as often use or do not use FaceBook are the students who come for help due to forgotten usernames and passwords, and difficulty understanding how to use learning management systems. This is all anecdotal, only impressions I get from working with students.

The survey also explored stimulant usage among the 69 students surveyed. 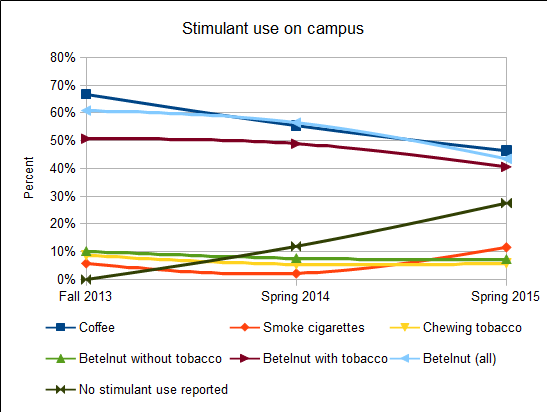 Although there are tantalizing indications of a possible drop in the percdenage use of betel nut, cigarette smoking may be on the rise among students. Despite the possible trend, usage of betel nut remains high with thirty (43%) of the 69 students reporting use of betel nut. Twenty-eight of the thirty report using the more carcinogenic combination of betel nut with tobacco. Cigarette tobacco is the leading tobacco choice among students. Cigarette tobacco was not intended for oral consumption, the additives do not get burned off and may also have a negative impact on oral health.