December 12, 2014
MS 150 Statistics has for the past three years utilized a modified curriculum based on a proposed outline. The three course level student learning outcomes for MS 150 Statistics are:

Performance on the second student learning outcome was measured by eight questions on the final examination. Student performance on this section was lower at 68.2%. This section has historically been weaker than the basic single variable statistics section.

The third student learning outcome, open data analysis, was assessed using a simple rubric that looked at whether a student made an appropriate analysis with correct answers to questions posed in the problem and the level of statistical support for those answers. The results for the 76 students are reported in the following table and graphically in the chart. 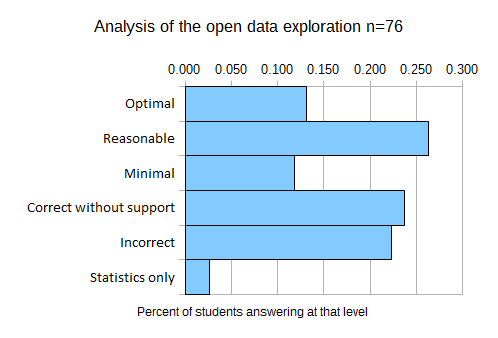 Overall performance on this section on a point basis was weak with a 36.5% average on this material - only optimal answers received full credit in points.

Data rarely comes wrapped up with nice neat specific statistical calculation questions such as "What is the mean of this data?" Data comes with general questions and the data analyst has to choose the appropriate tools for the analysis. The open data exploration seeks to probe the students' ability to handle data in the "wild."

The three sections corresponding to the three student learning outcomes have been measured since the fall of 2012. The following chart provides some historical perspective on these values. 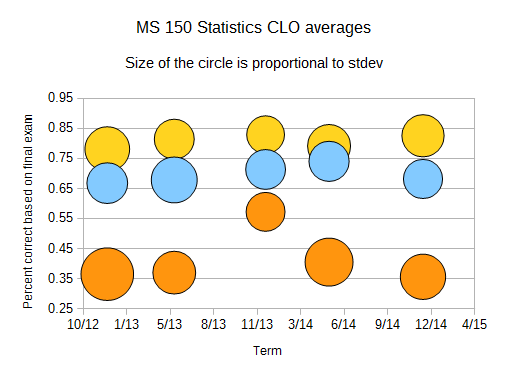 Overall students prove quite capable, by term end, of making specific statistical calculations when told what calculation to make. When given data and questions that do not explain what statistics should be calculated, student performance is weaker. This addition of open data exploration to the course was stimulated by the American Statistical Association's Guidelines for Assessment and Instruction in Statistics Education. In the full report the ASA recommends to "give students plenty of practice with choosing appropriate questions and techniques, rather than telling them which technique
to use and merely having them implement it." The ASA also calls on statistics instructors to move from using naked or realistic data to using real data. My data remains in the realistic realm more than in the real realm, the exercise does require the student to choose the appropriate techniques. MS 150 Statistics continues to seek to implement best practices in the field of statistical education.