October 18, 2014
Laboratory nine in SC 130 Physical Science has used a procedure that I first used in 1990 when teaching a high school physics class. Boards are clapped in synch with an echo. Timing the claps and the measuring the distance to the building has permitted relatively accurate measurements of the speed of sound. 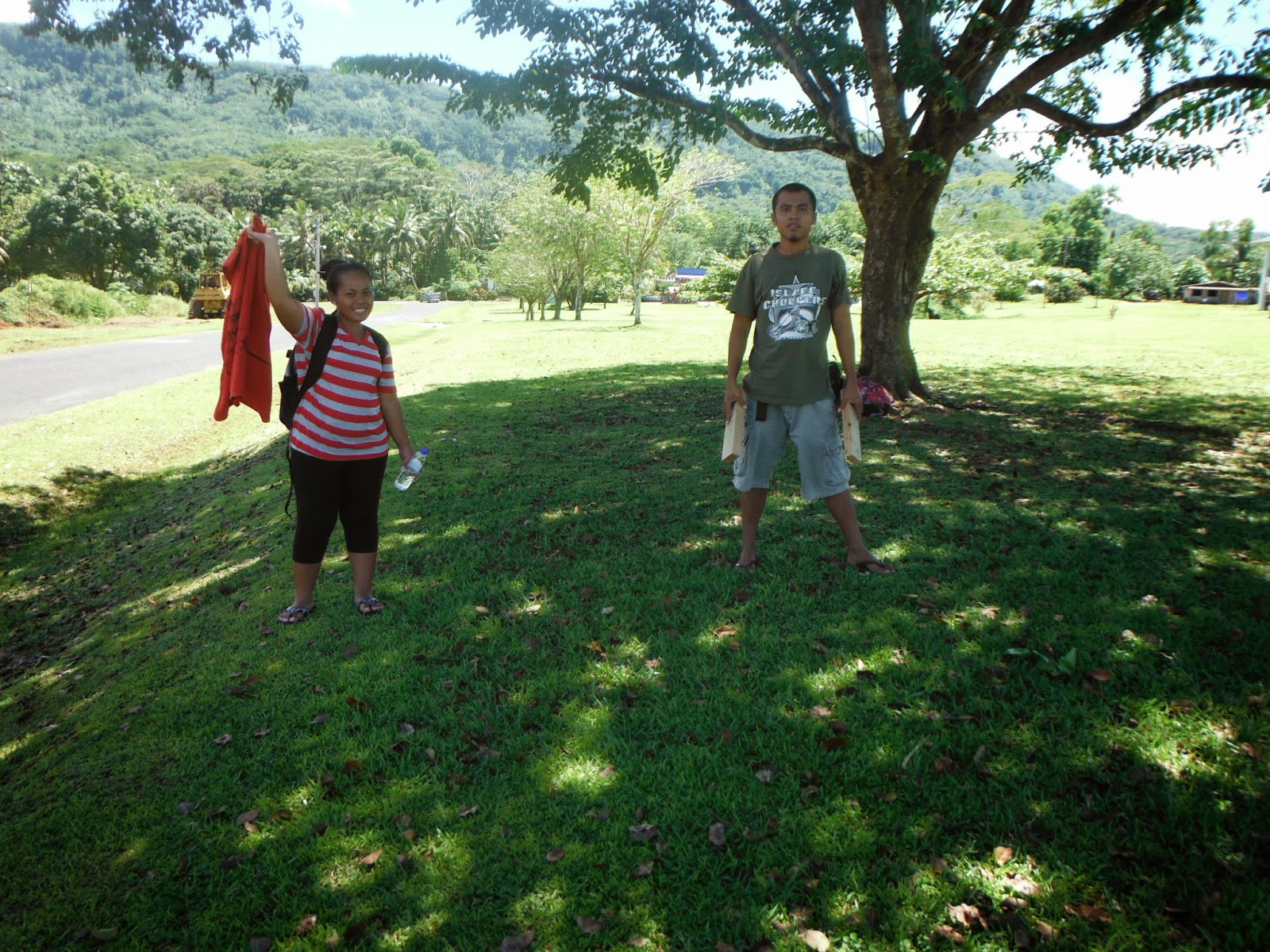 The day was sunny, clear, and hot. The past couple of years the sound lab has seen rainy days. Ducking between buildings, listening for echoes in the rain have been the norm. While walking down the road in the 8:00 laboratory I realized that I could demonstrate the delay between seeing an event and hearing the event. I knew that if there was enough distance between the clapper and the observer, the human eyes and ears system would detect the difference. 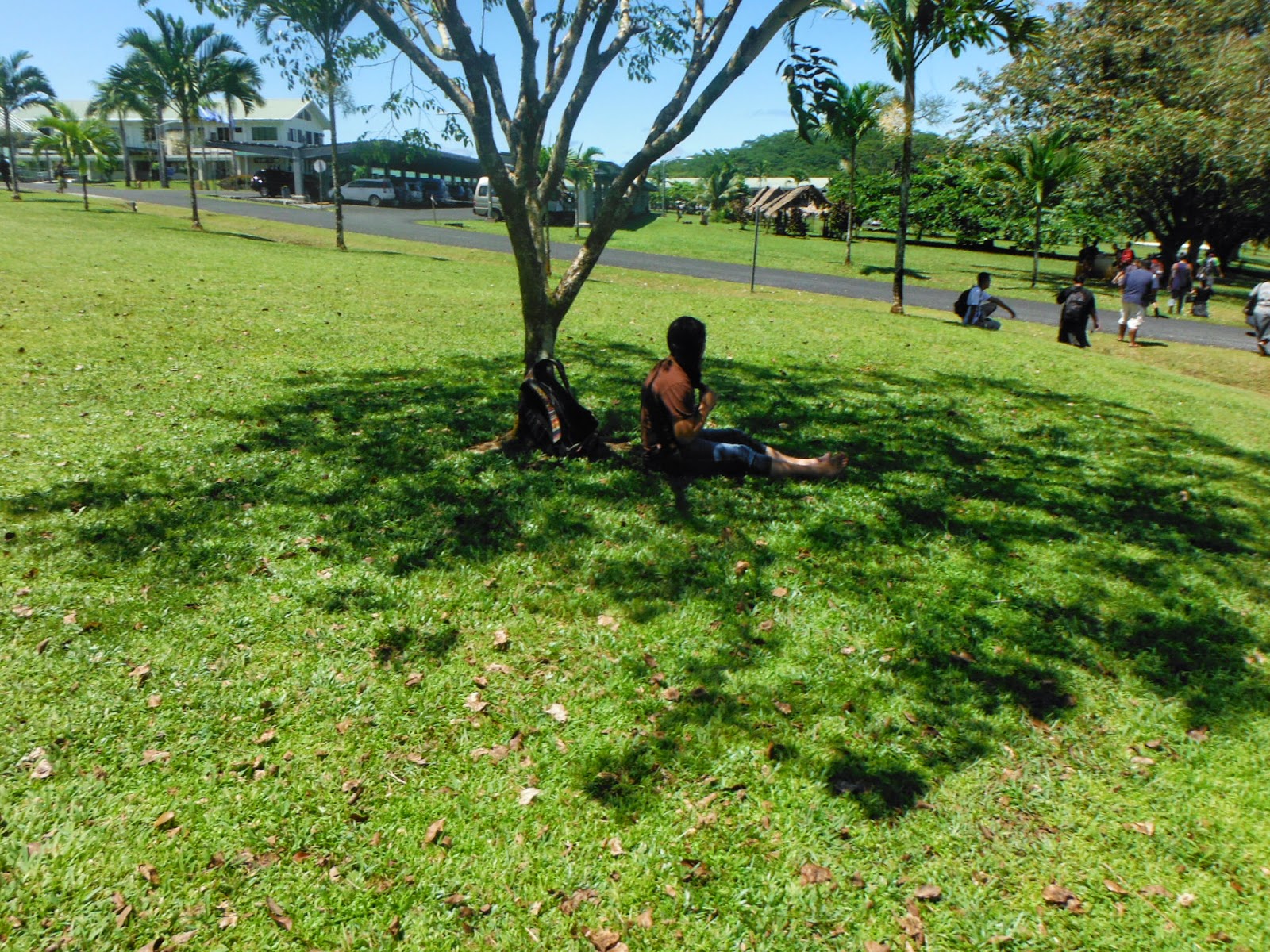 Human telegraph system in the 11:00 section 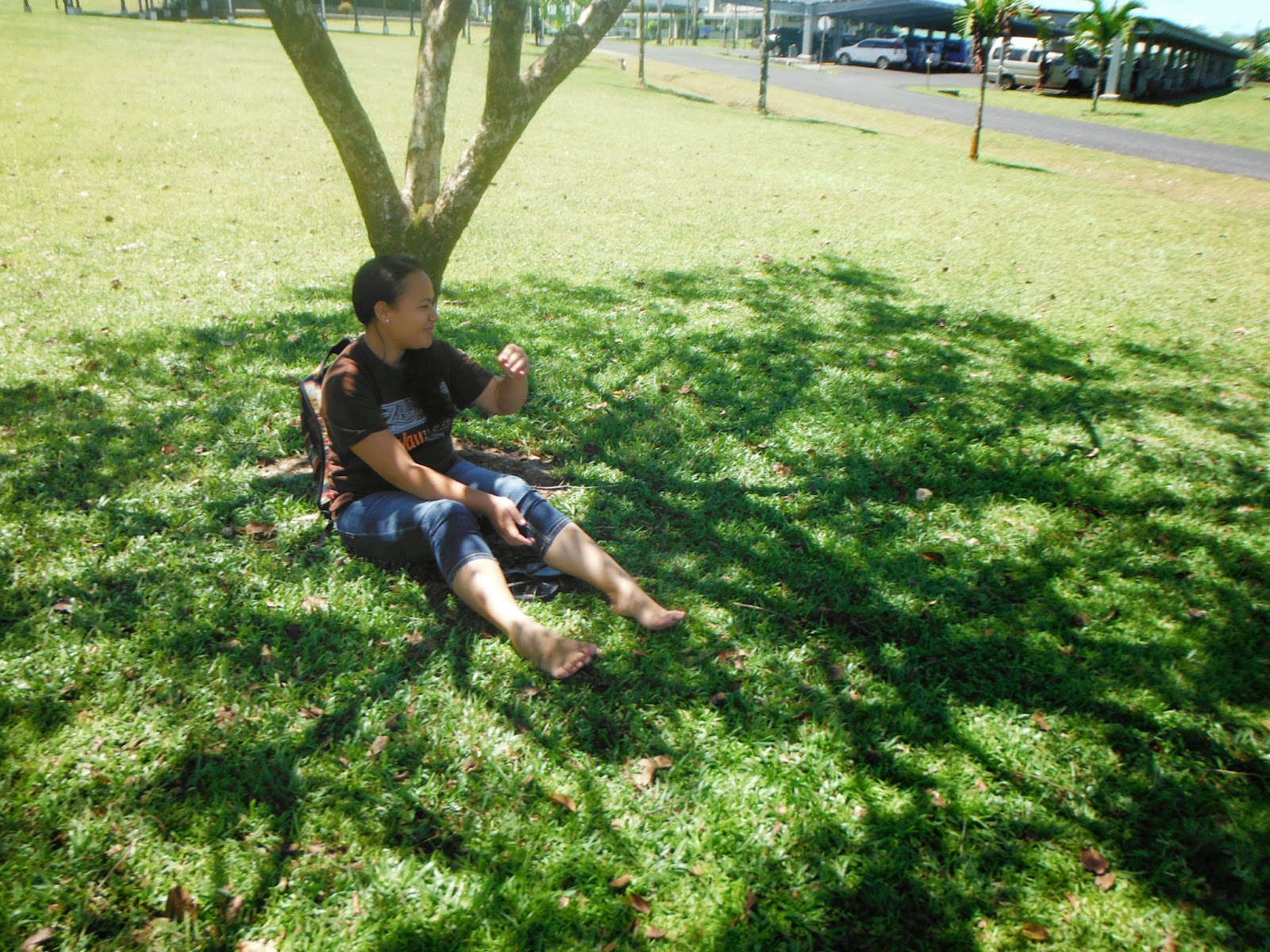 I chose this arrangement as I would be well lit by the morning sun in the east. The class would be looking west to see me. I clapped and then they timed. We had no pre-arranged signals. With almost 200 meters between us, communication was not possible. 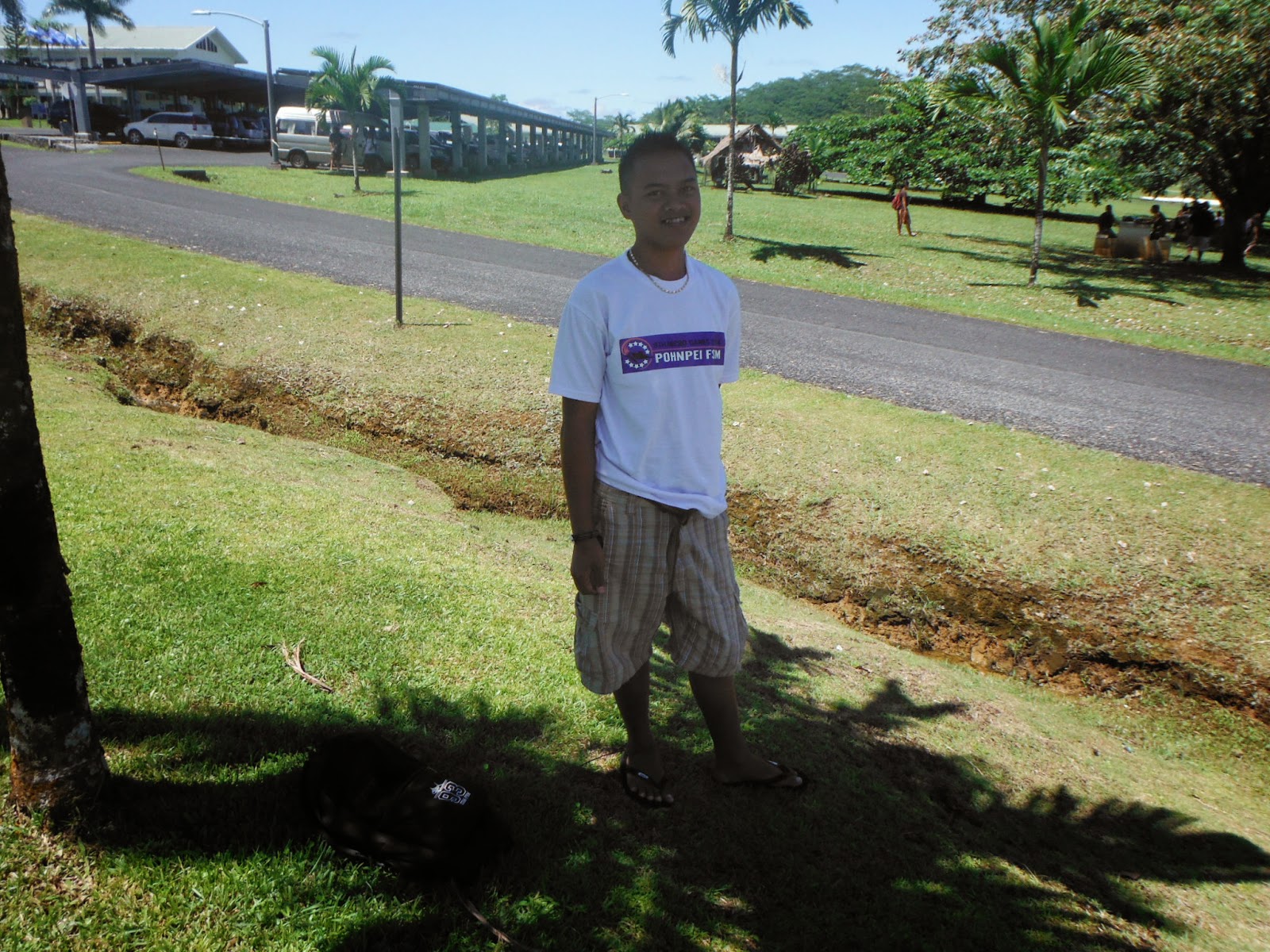 Edward Reyes, another link in the communication chain

I wound up being unable to know whether the class could time the difference. I also had no idea of the time delay they were seeing. When we did get back together and ran the numbers I found that the timed difference implied a speed well under 300 meters per second. Done well, the echo measurements can produce more accurate results. With day time temperatures of 28 to 30 Celsius the speed of sound is up around 350 meters per second on Pohnpei. 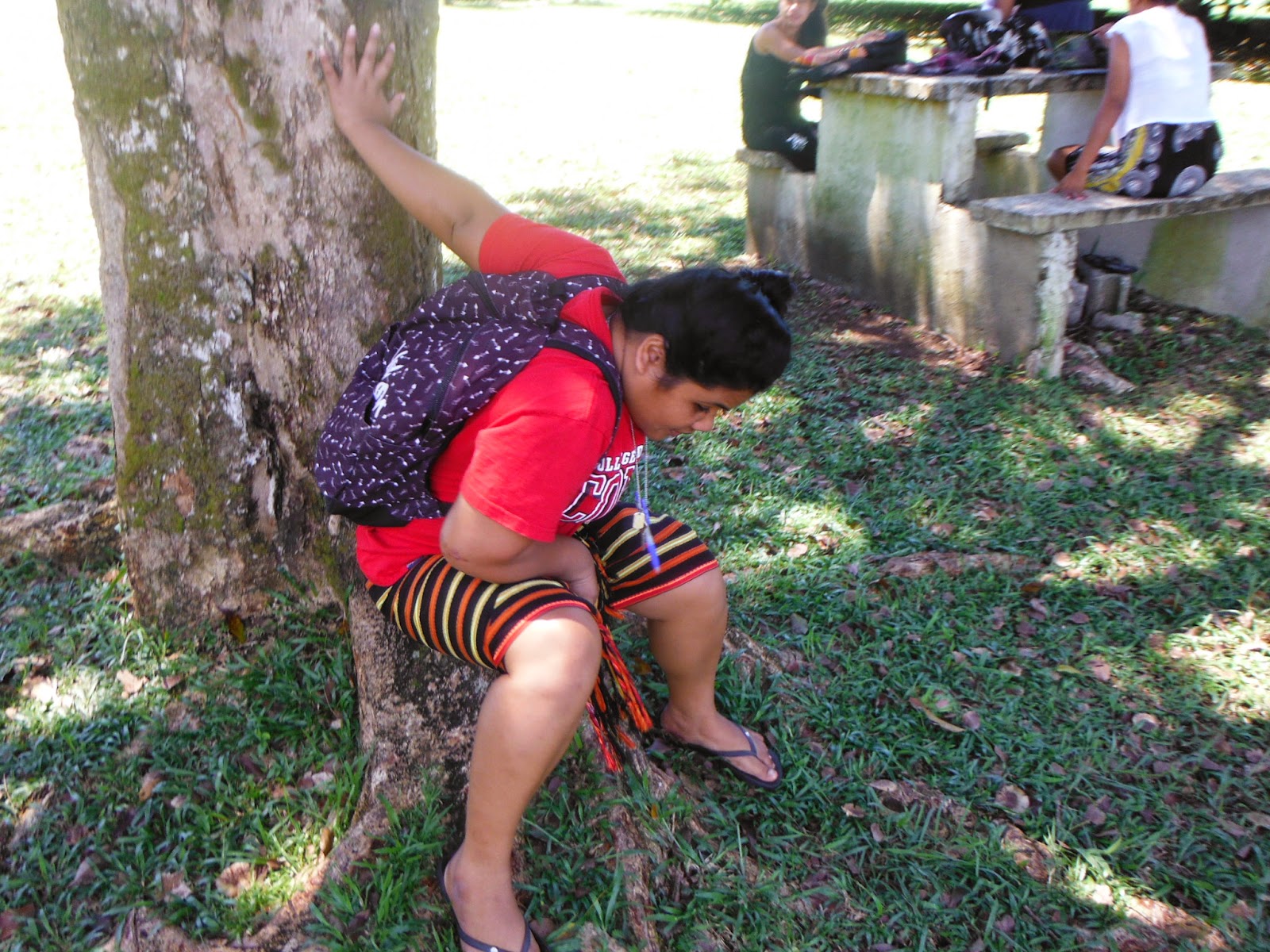 Cherish Laiuetsou tries to find a comfortable seat, four or five trees down the road

The group reported that despite the heavy equipment operating on the north side of the road, they could very clearly hear my boards clapping. That was tantalizing. That suggested that I could stretch the distance and improve the accuracy by increasing the time differential between the arrival of light and that of sound. 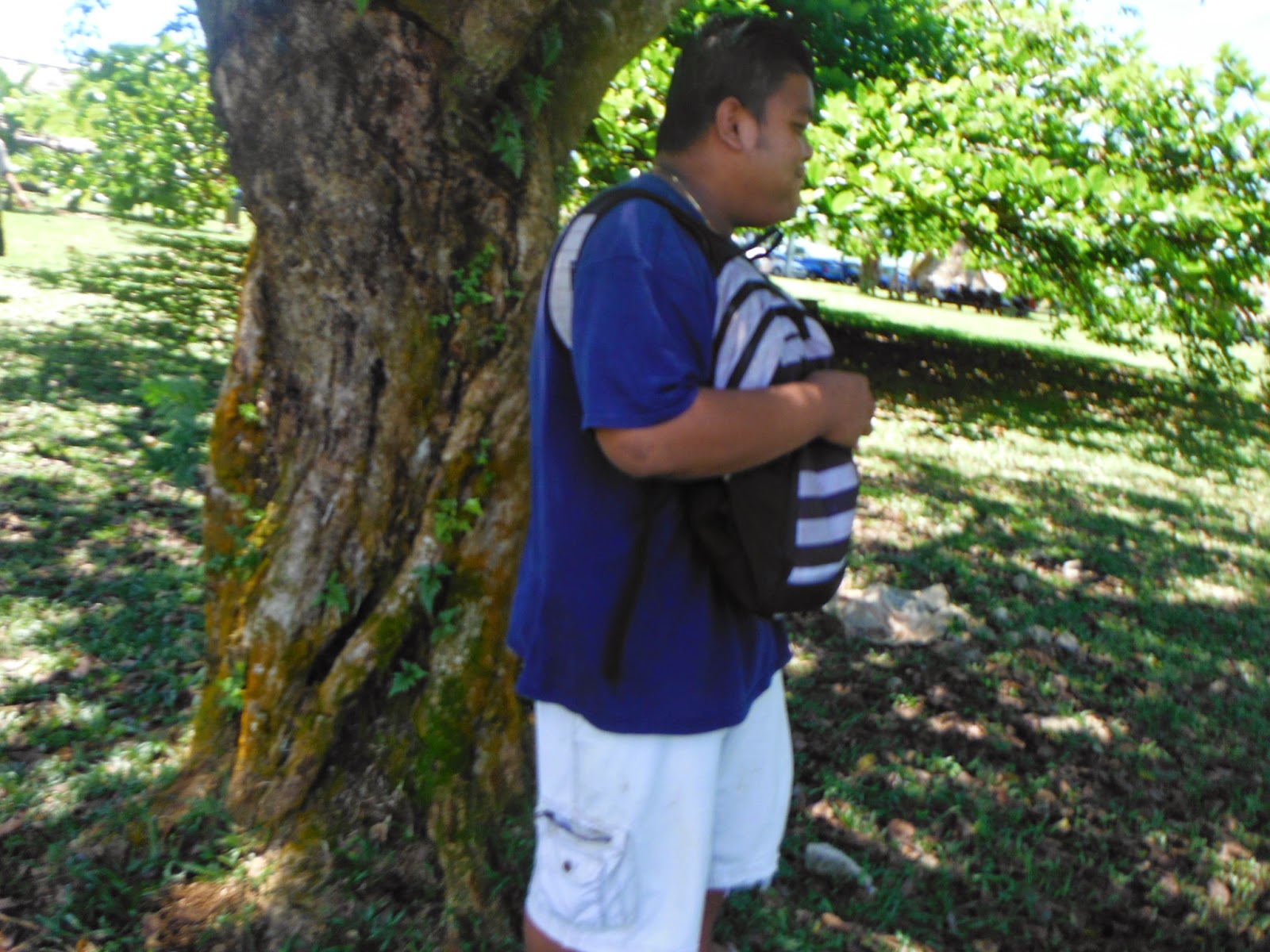 Gordon Loyola mans his post. Or tree in this case.

Noting that the road near the B building is higher than maintenance, and given the unusual southeasterly winds that Thursday, at 11:00 I decided to leave the clappers at the B building. I gave Marla a red towel to swing in synch with clap as I knew the distances could get too large to see the clapper clap. Malcom kept the clapping boards, the rest of the class headed west. At each tree I put one student, creating a human telegraph system. Unfortunately I ran out of students. The students would later report that I could have put them on every other tree just as effectively. 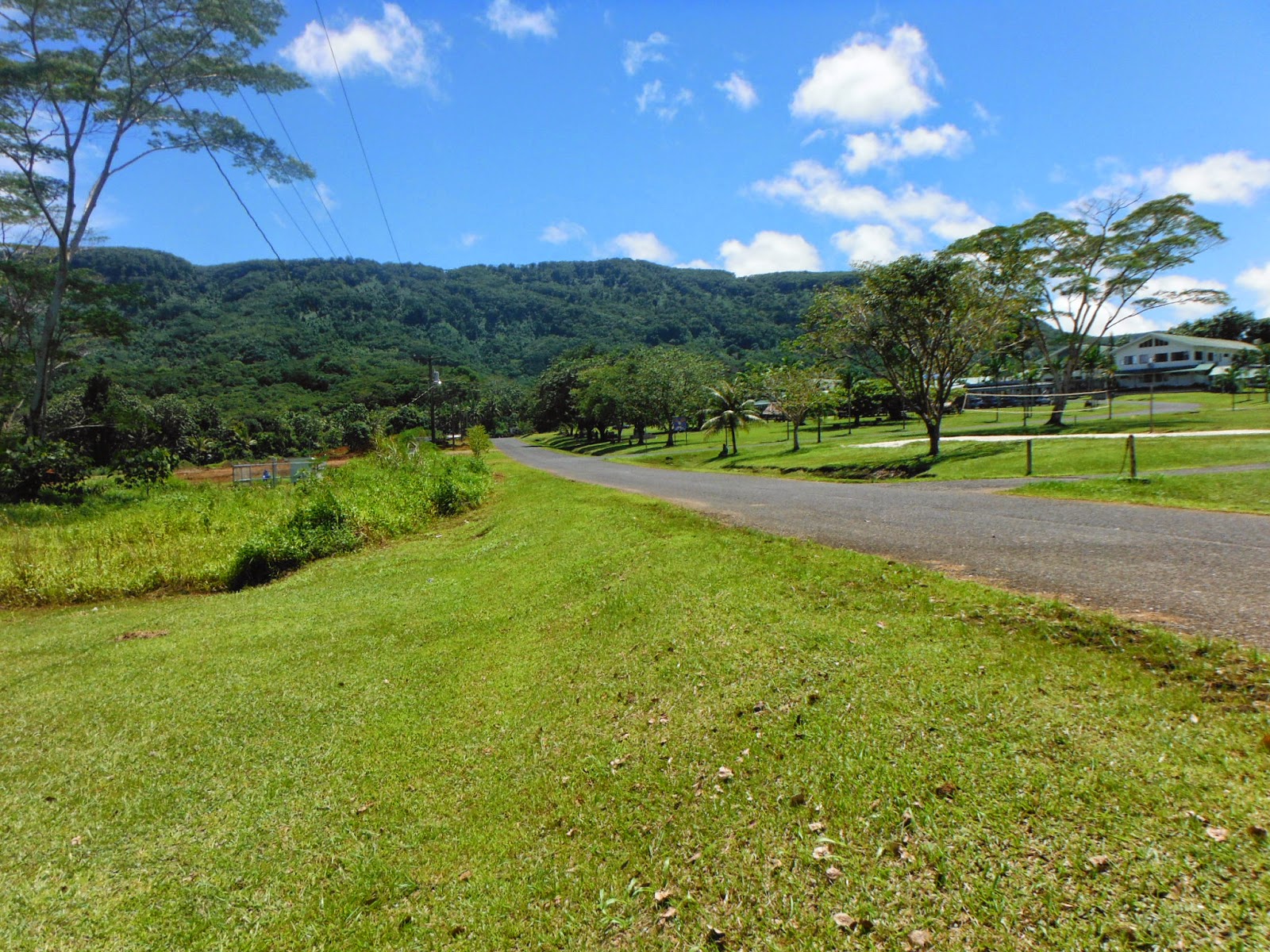 The day was stunningly clear. One can barely make out the students under the trees. Malcom is way back at the visual end of the road.

Despite the distance, the claps could be very clearly heard from maintenance, and from here I could still see Malcom clapping. The photograph does not do justice to the actual visibility of Malcom and the boards. I did send word back up the human telegraph that Malcom needed to step out into the sun to improve visibility. Under the shade of the tree I could not see the boards. 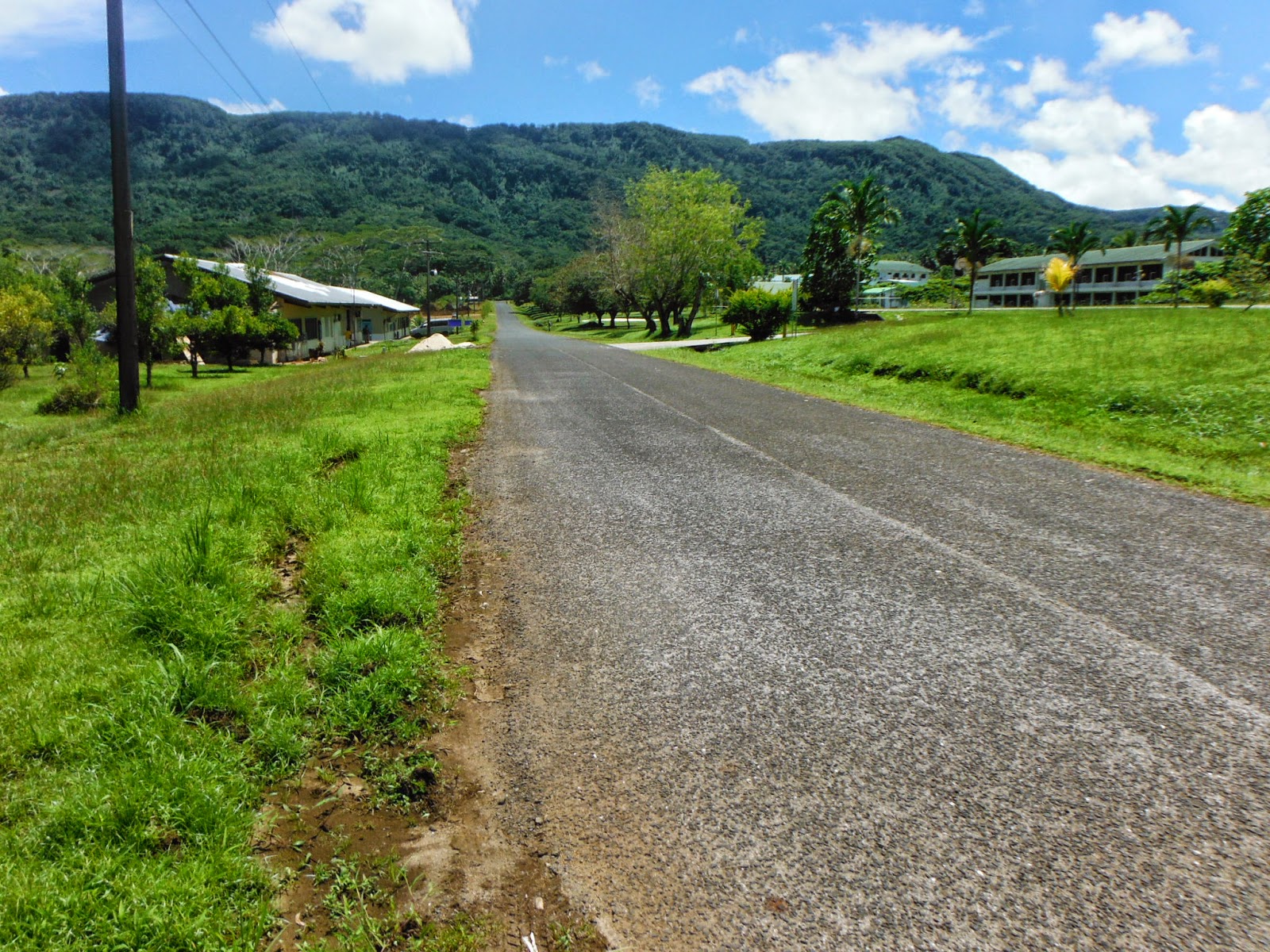 Shari Crystal Pablo was carrying my clipboard. We pushed westward out beyond the end of the human telegraph. We had a signal pre-arranged that I would raise my hand when I was ready to time. Malcom fortunately had acute enough vision to see my hand. 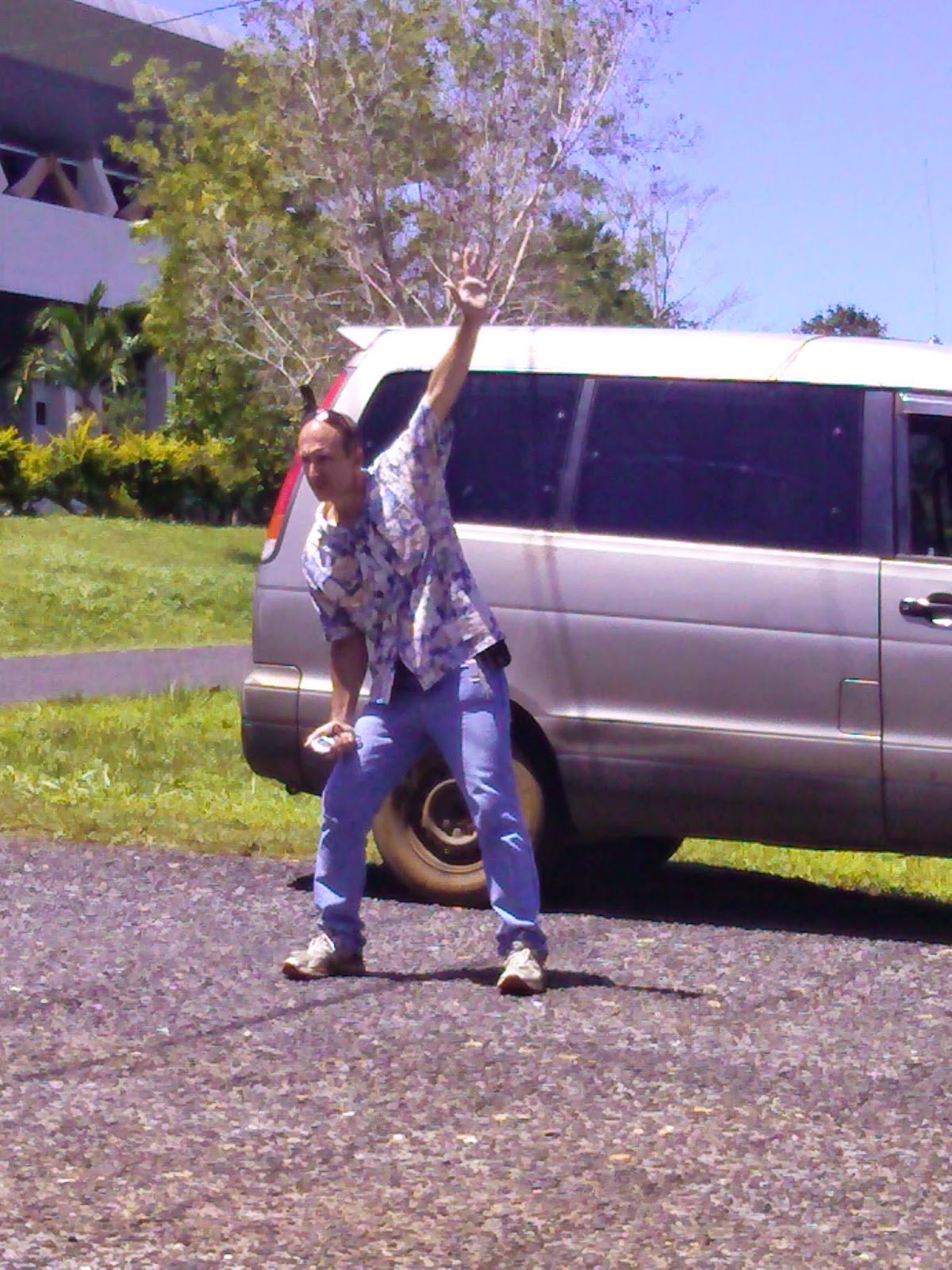 Security Chief Warren Ching captured me raising my hand signaling for a clap - probably needed a towel flag of my own. In my right hand is the stopwatch. Shari Crystal and I were both impressed with the sight to sound delay at this point - 327 meters away. I was more amazed at how clearly I could still hear the clap. I learned that noise happening between the clapper and the timer does not matter provided the area around the timer is quiet. The timer needs quiet, but construction equipment can be running at around 100 meter mark and not interfere with listening for the clap out at 327 meters. 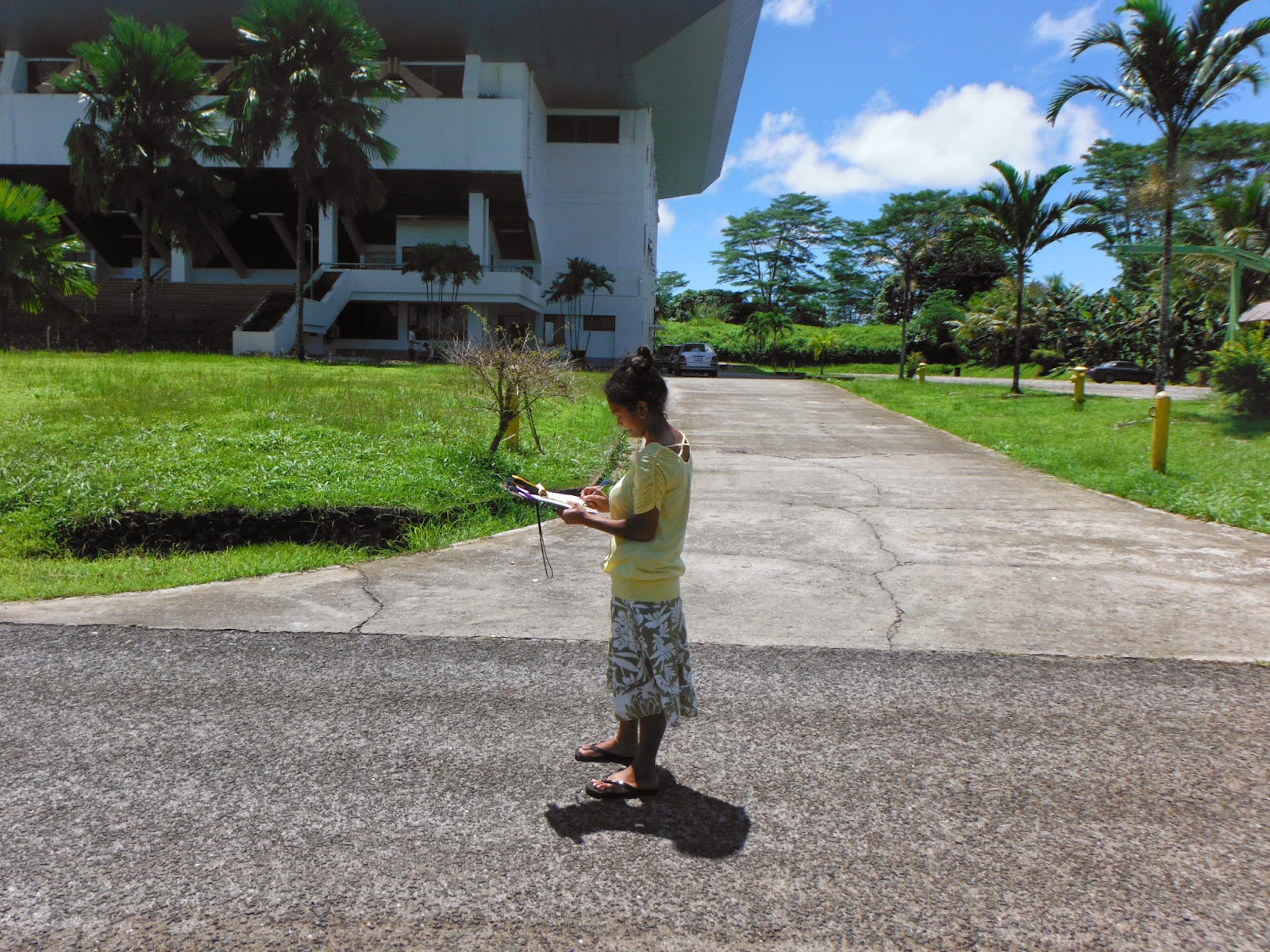 At 436 meters I could not longer see Malcom clearly. Marla had presciently stepped down into the road itself with her red towel and her towel flaggings became the only way I could start my timer accurately. The delay was now most impressive. The clapping could still be heard, but what I could not know was that one of the boards was splitting badly. Malcom was persevering with a splintering board at some risk to his own hands.

If the issue of the board integrity could be resolved, or a louder noise made consistently, then the measurements could easily extend out another 100 meters or more. 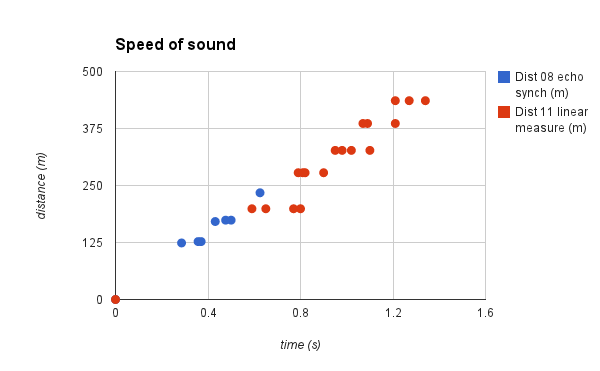 The echo data above tops out at 0.625 seconds and 274 meters - the out and back distance to the bookstore. In some terms an out and back to the gym from the K building yields a 395 meter distance. The complication is that the bang of the boards tends to deafen the listener to the quiet echo. And for the gym the echo is no longer a single sharp sound. At 395 meters the echo is a stretched out sound, an odd "kiiiSHEK" sound that leaves one unsure whether to time the start or end of the sound. The issue may be sound rebounding off the men's residence hall and maintenance. The linear measurement, however, did not have this effect. The bang was clear and not smeared out in time. The distances that could be timed were longer than some of the longest echo distances.


Weather permitted the long linear measurements this term, the results were quite positive. In any future run there are some adjustments that might be made. The human telegraph was valuable (no student had a cell in the 11:00 class!) and could have been spread slightly thinner. That said, more students should have wound up with Shari Crystal and I - only we experienced the full effect of the time delay.

The tree sitters should be given stop watches too. Having them attempt to time the light to sound difference would be fun and might occasionally show that the sound is really travelling. This would mean recording their distance from the clapper and maybe leaving a second person to record data at each tree.

I like being the final timer - the accuracy of the measurement really depends on an experienced hand at the final distances. Linear regressions are most affected by the smallest and largest x-axis values.

If I do this again, I should carry a second set of boards so I can clap back. This would allow the clappers to experience the delay between seeing and hearing. Maybe they could also time the differential, provide more data. That would mean my taking a flag person along with a data recorder - a second red towel waver.
physci