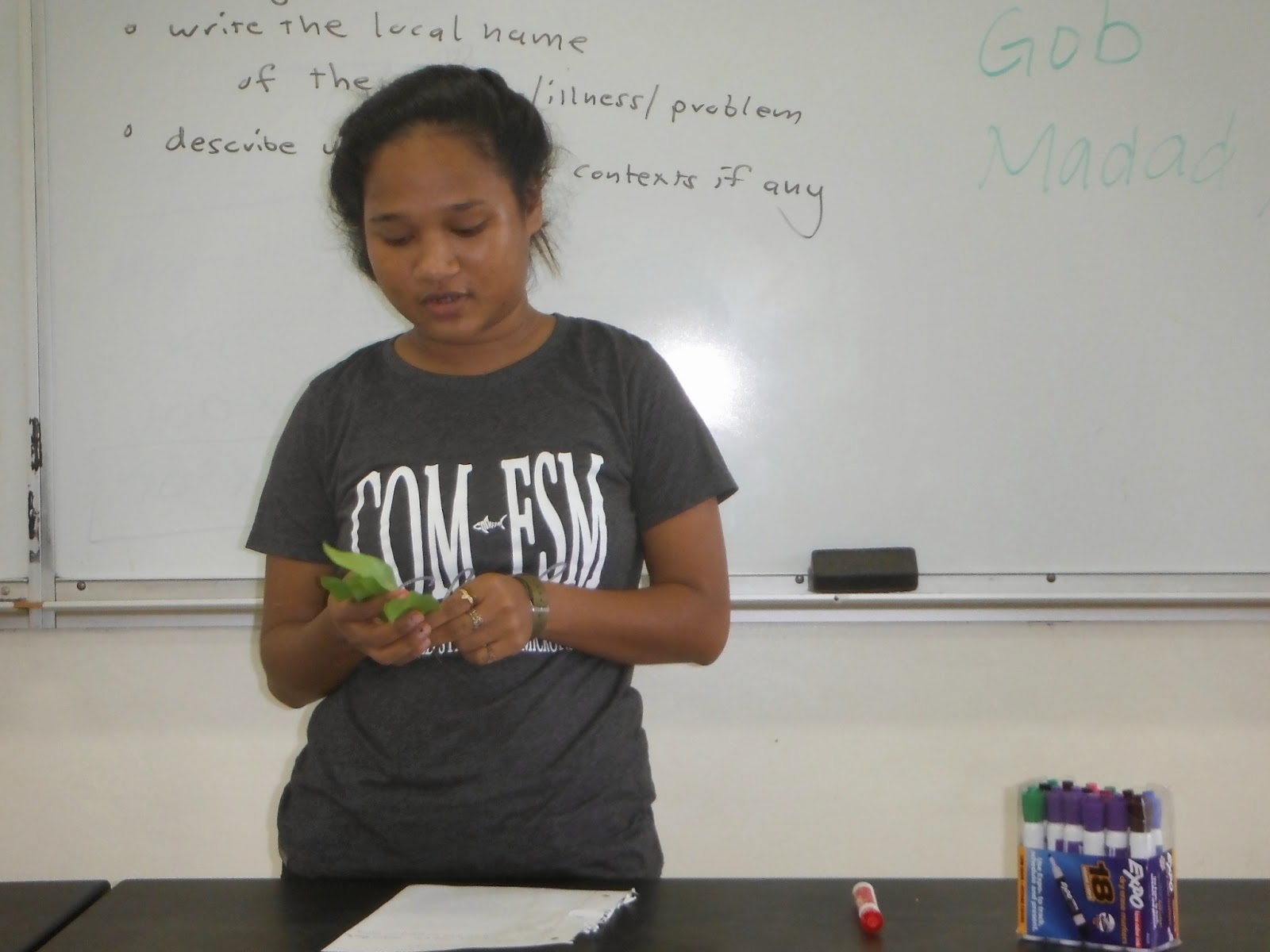 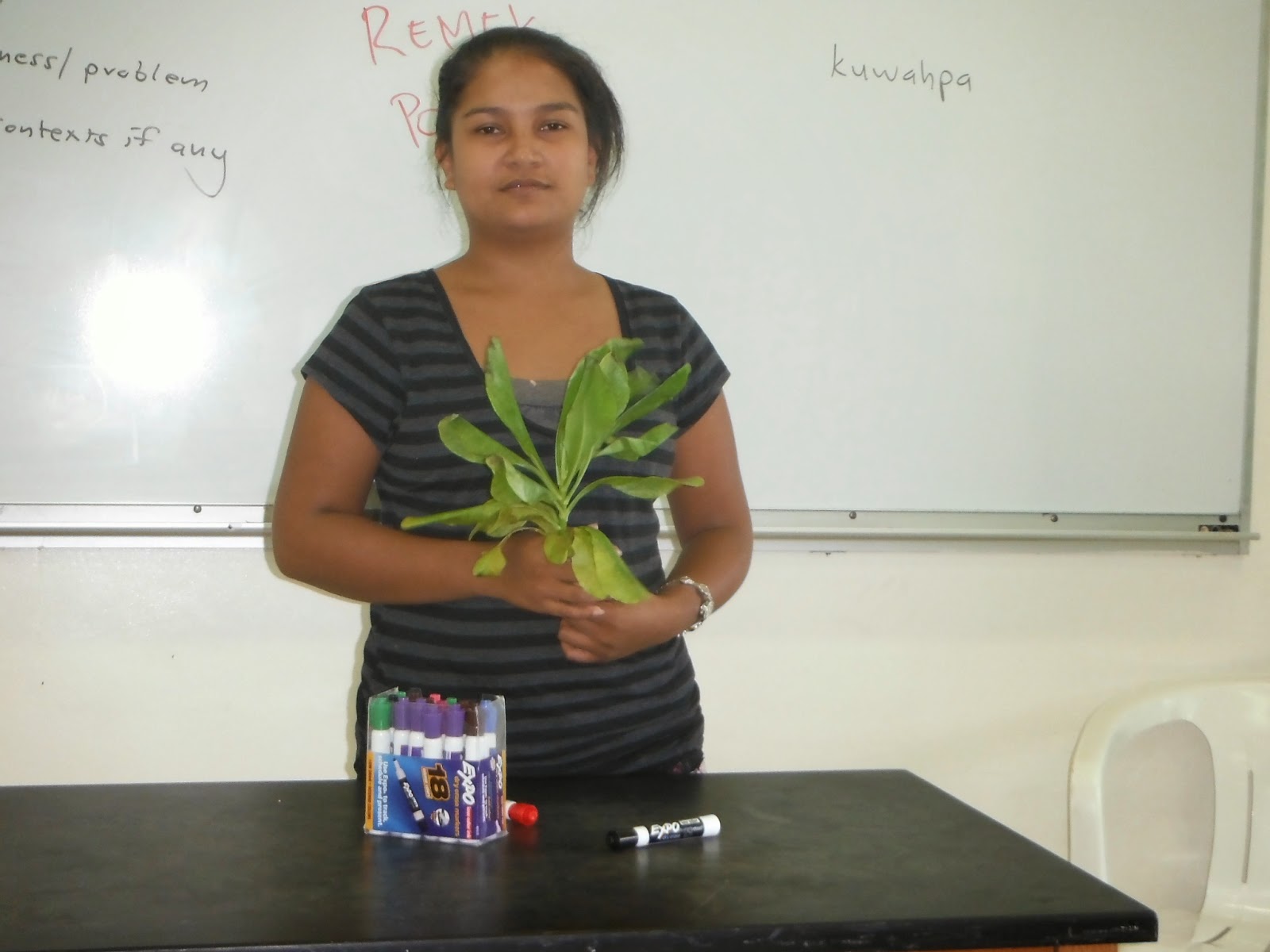 Maylani Clarence presented the use of Scaevola taccada, remek, to prepare a tea for abdominal illnesses in women. The tea is supposed to be good for certain types of womb sickness, a tonic for cleansing the womb. 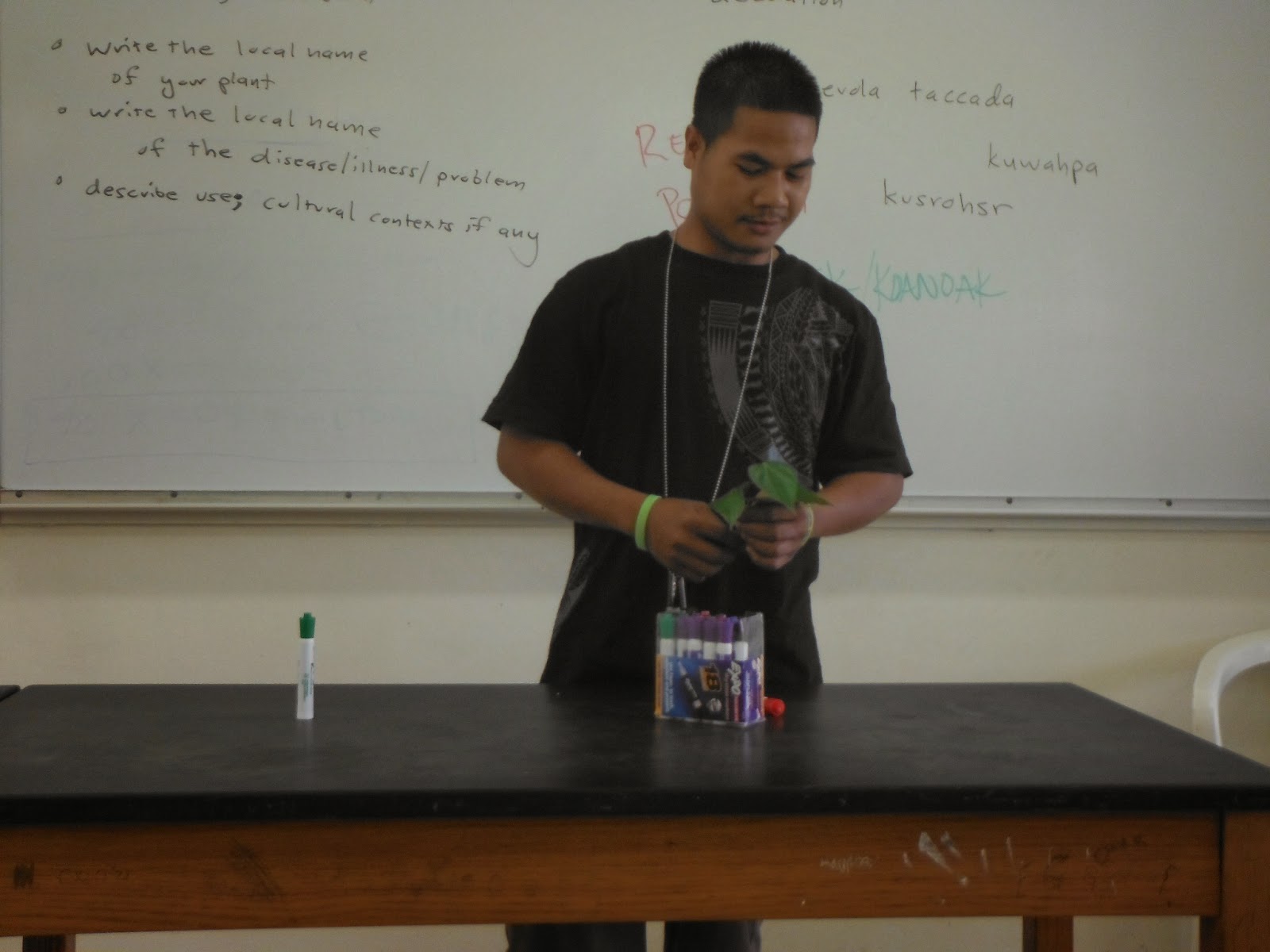 Elson Elias covers the use of Piper ponapense, konok, for staunching bleeding. 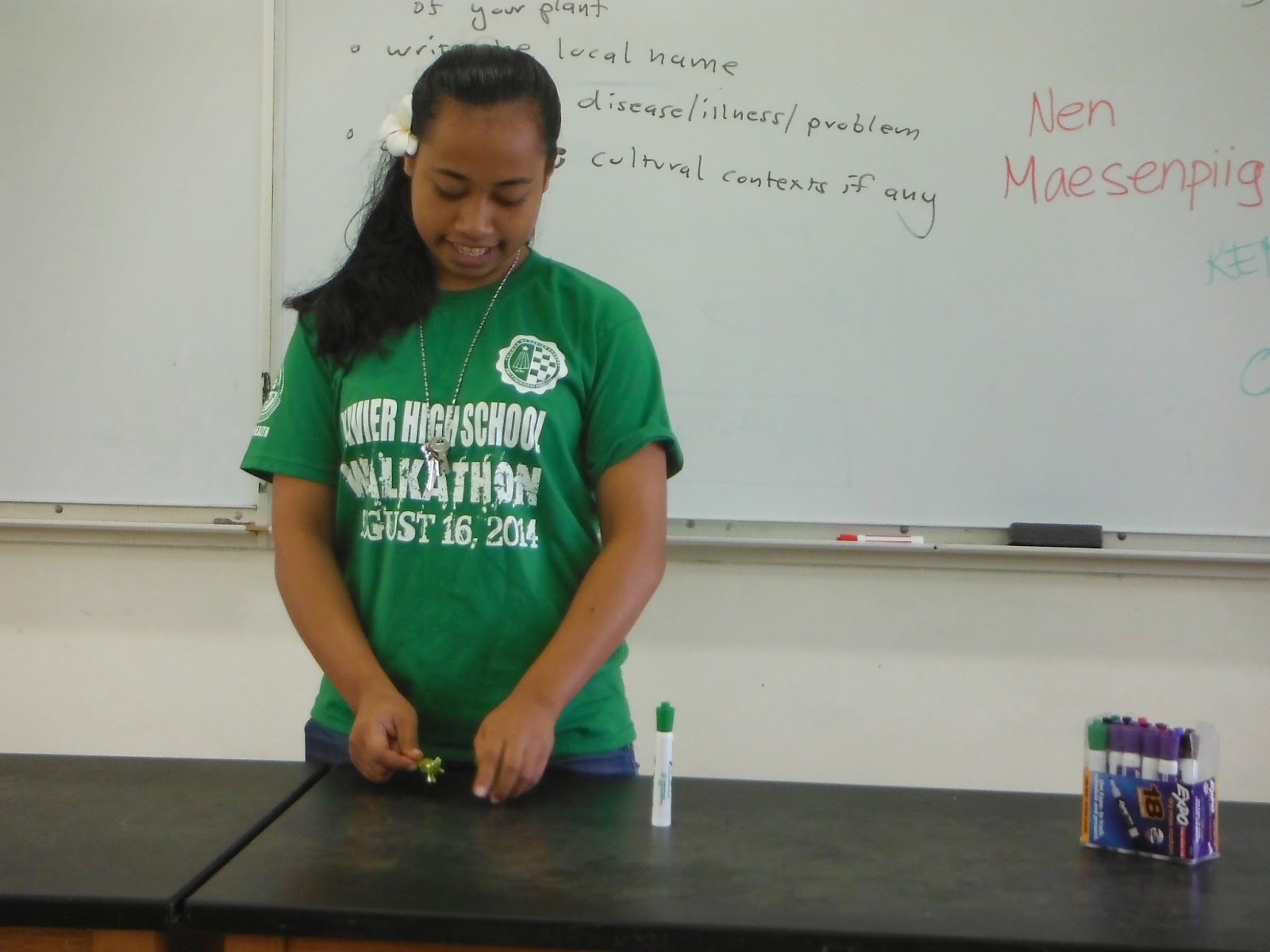 Andrea Ewarmai explains the use of the fruit of Morinda citrifolia (nen) to treat flu (maesenpiig) in the outer islands of Yap. Fruit that is still producing flowers plus three very young leaves are chewed and swallowed to treat flu. 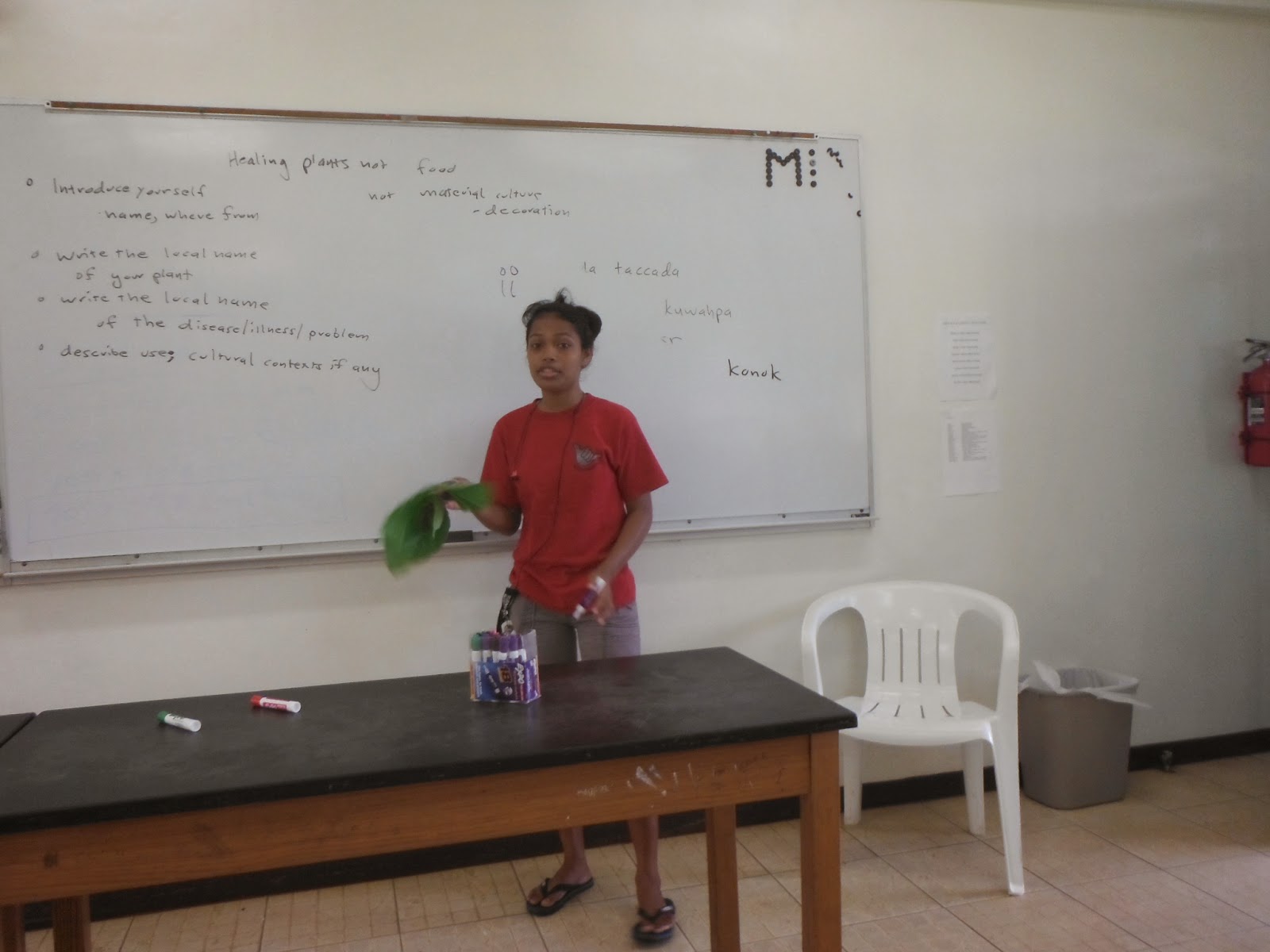 Ronda Kephas covered the Kosraean use of Morinda citifolia (i) roots in the treatment of kohkohf - cough. The roots are boiled in water to make a tea. Drinking the tea helps alleviate the coughing. 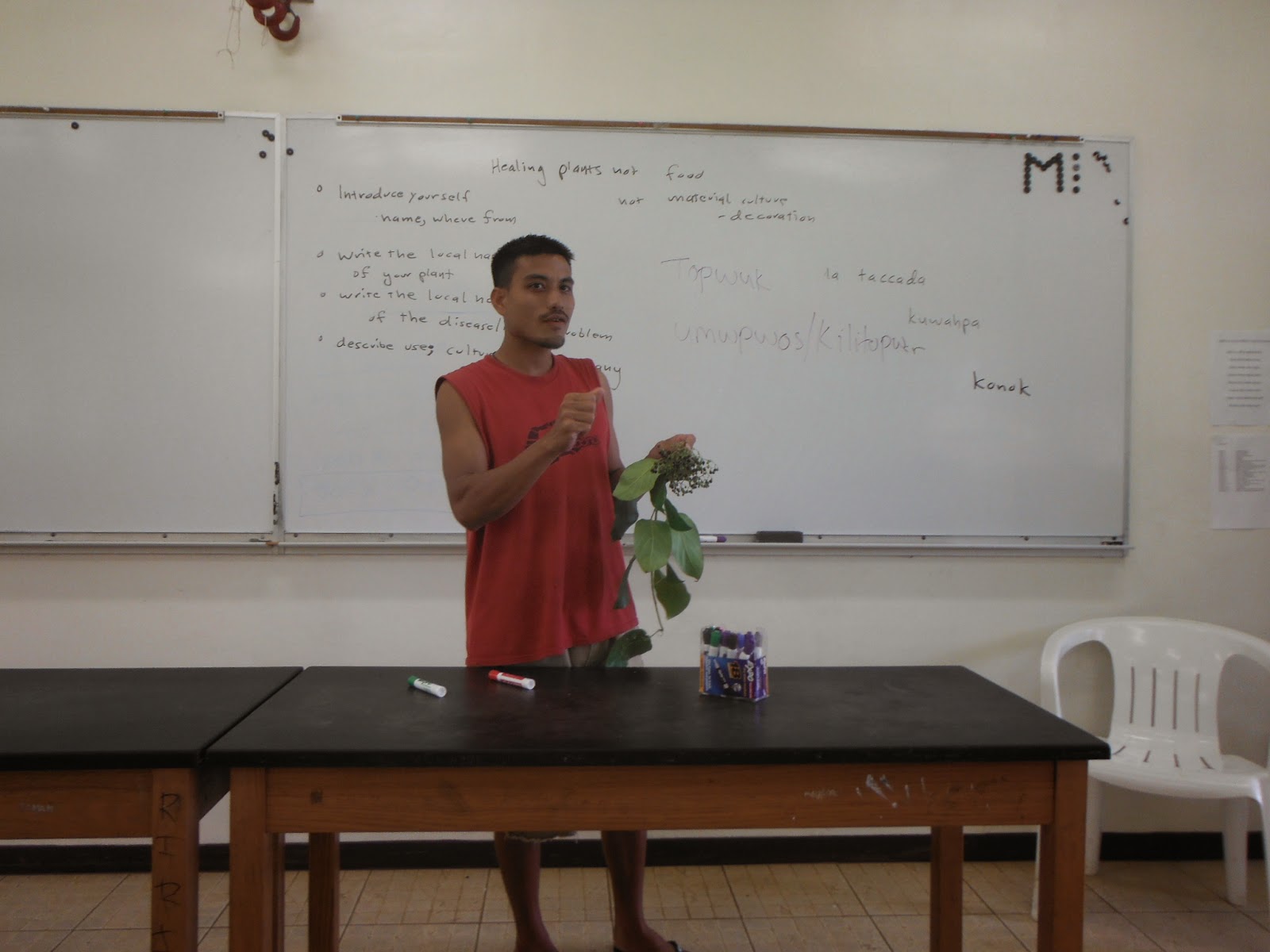 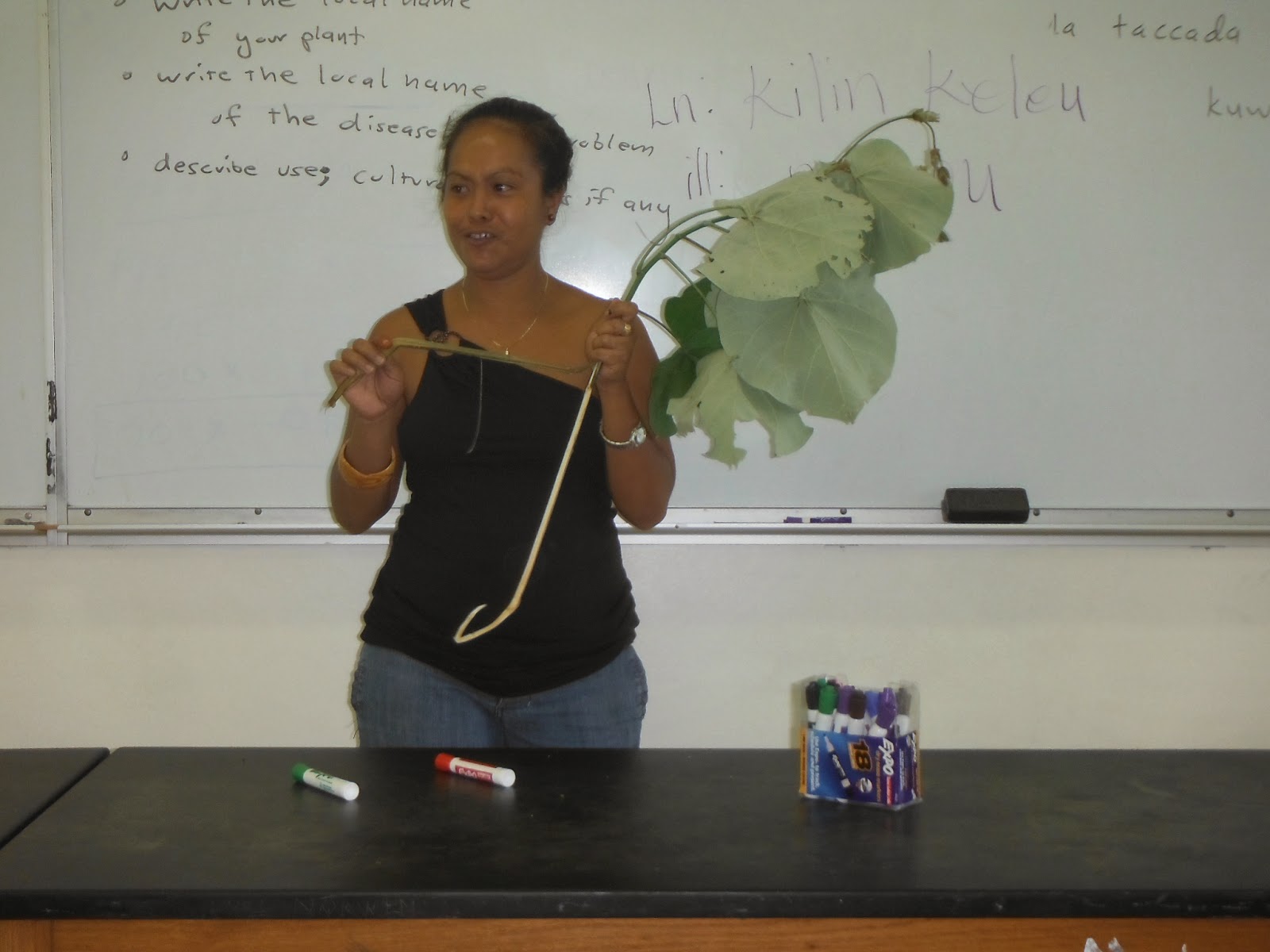 Judy Ligohr noted the use of the bark of Hibiscus tiliaceus to treat a skin bruise (mwou). The treatment was unusual in that six inches of bark are boiled in water until the water turns brown, then the water is drunk as a tea. This is unusual as the bruise is external and treatments for external skin issues are usually also applied externally. This is an internal treatment. 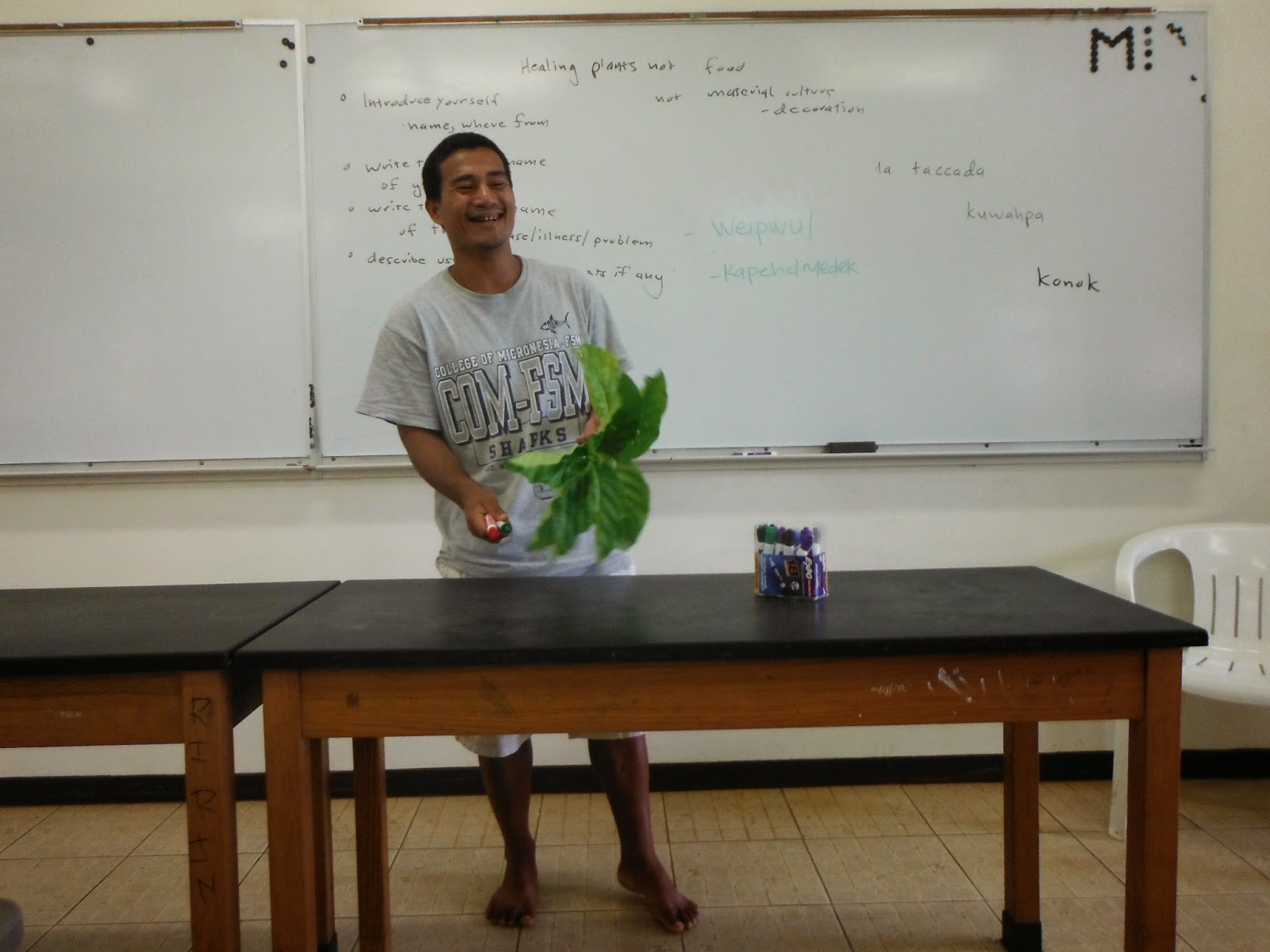 Marvin Louis proved to have stage presence in his presentation on the use of Morinda citrifolia, weipwul, to treat headaches. His recommendation was to eat one fruit to treat a headached. Probing whether the fruit had to be a certain size yielded a non-specific answer of "any size." In ethnobotanical medicines the stage of development of the plant part used is almost always specified by a healer. The lack of specificity leaves open 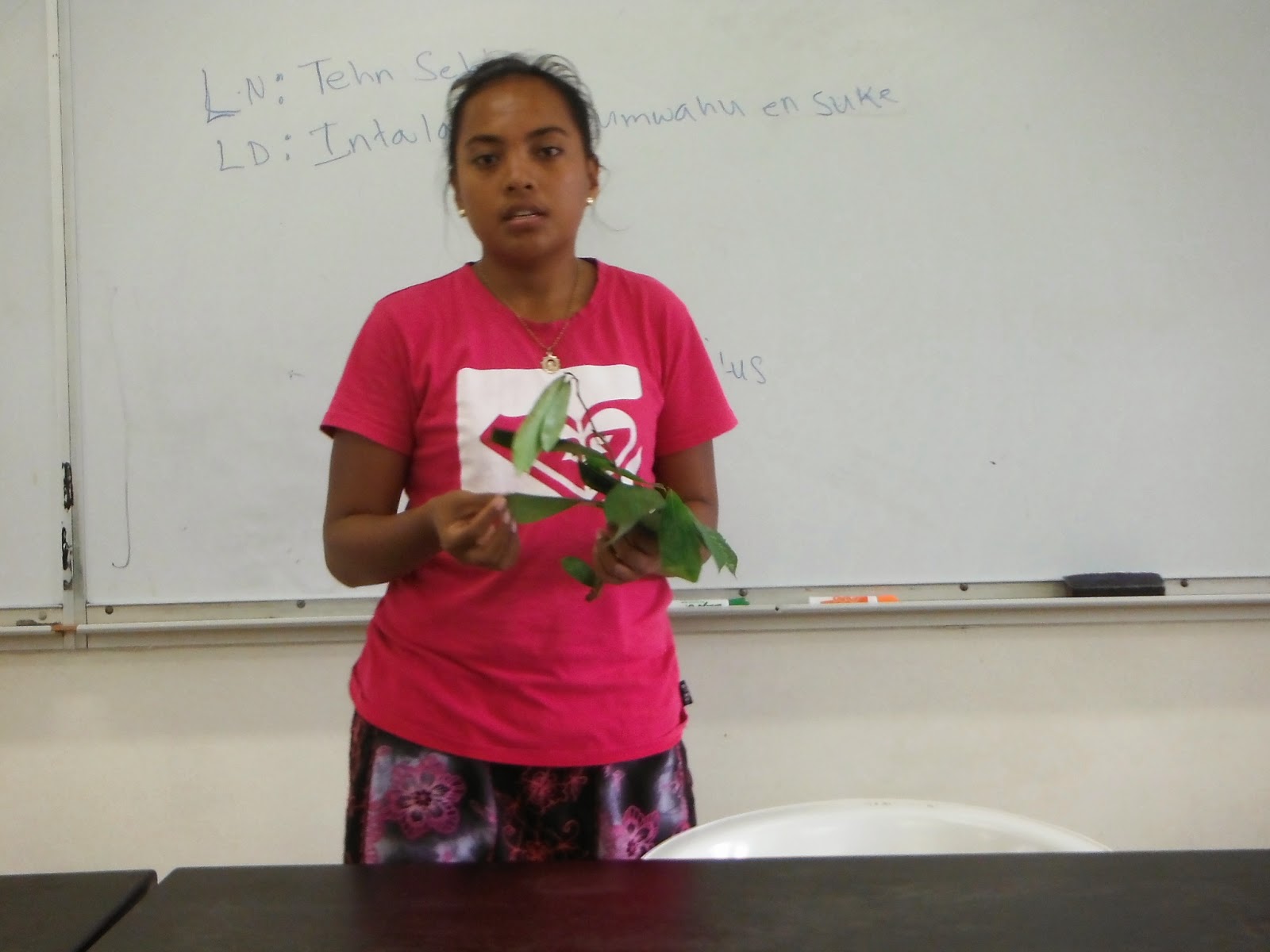 Jennifer Panuelo spoke about the use of Annona muricata leaves (tehn sehi - soursop leaves) in the treatment of high blood pressure. The leaves are used to produce a tea which is ingested to reduce blood pressure. 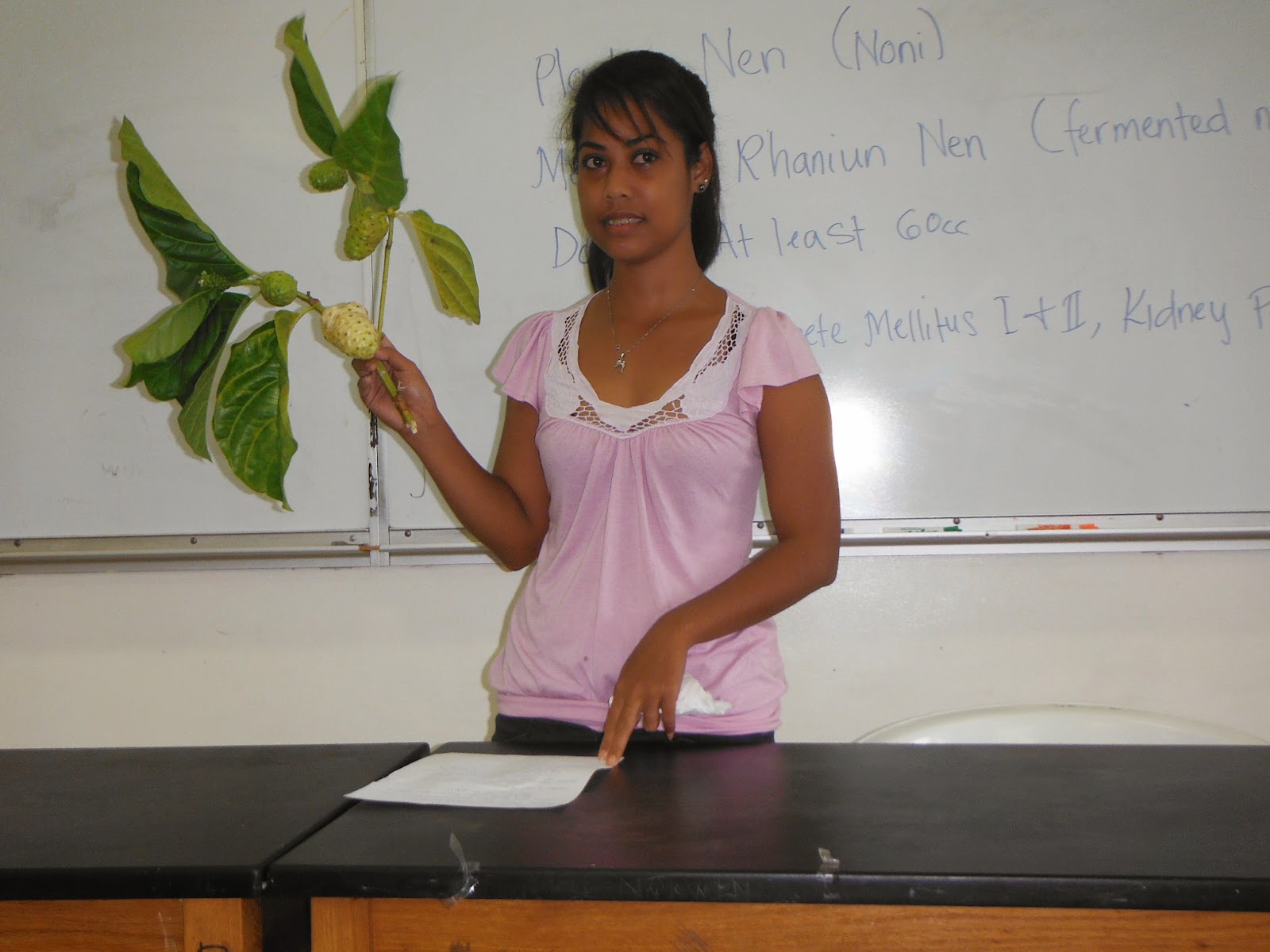 Katielyne Nianugmwar from the outer islands of Yap covered the broad spectrum of ailments that fermented noni juice from Morinda citrifolia is said to treat. The fermented juice is used to treat diabetes, kidney ailments, and many other ills. 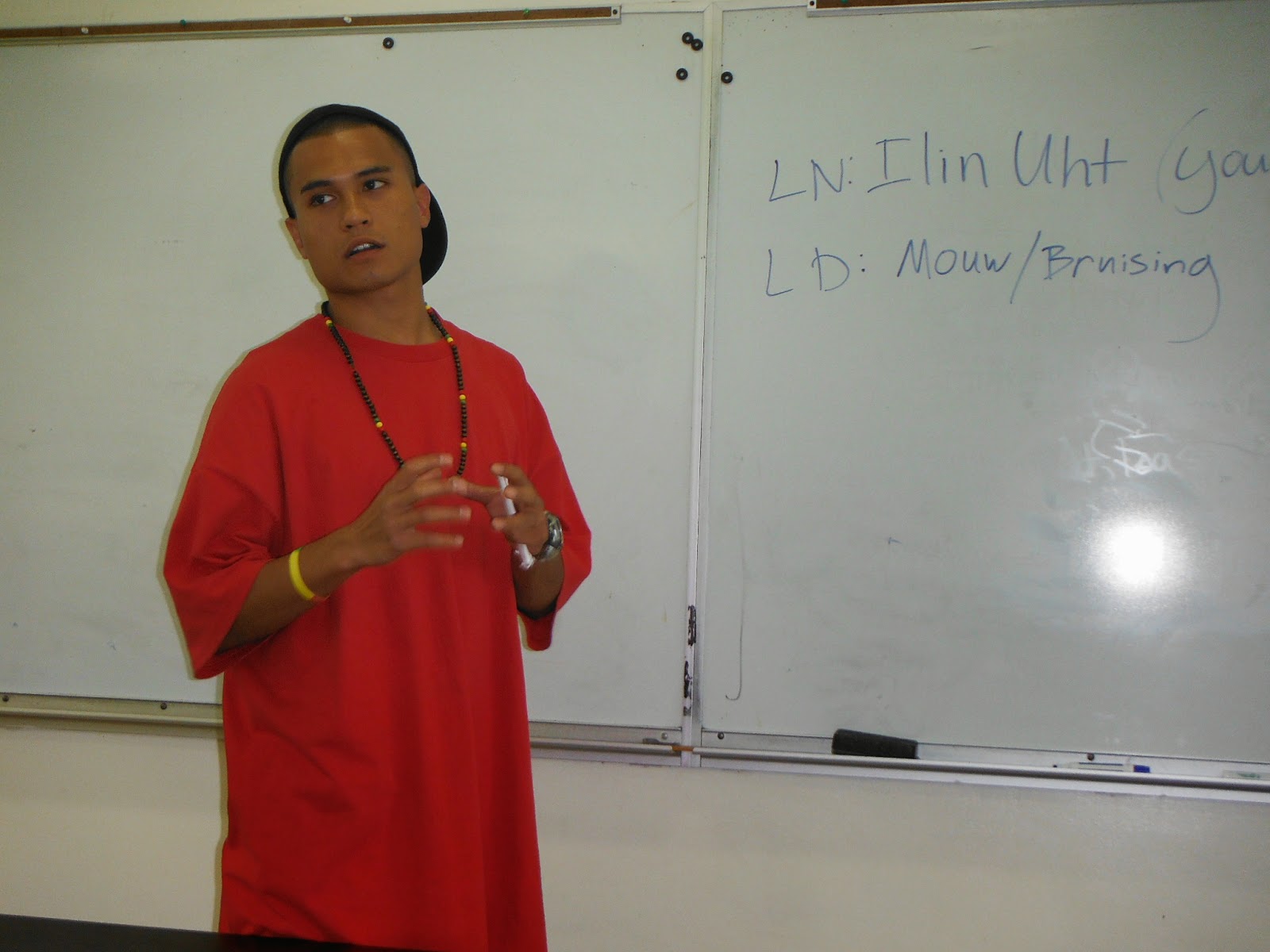 Arnold Panuelo speaks to the class about the use of young banana tree shoots to treat external bruising. Unlike the earlier treatment, in this treatment the shoot is mashed up and applied to the bruise. In the past I have heard of the fermented liquid from a banana tree trunk being used to treat burns. For an old trunk the interior is probably very oxygen deficient, so the foul smelling liquid probably includes alcohol. Banana tree trunks are also used in splints. 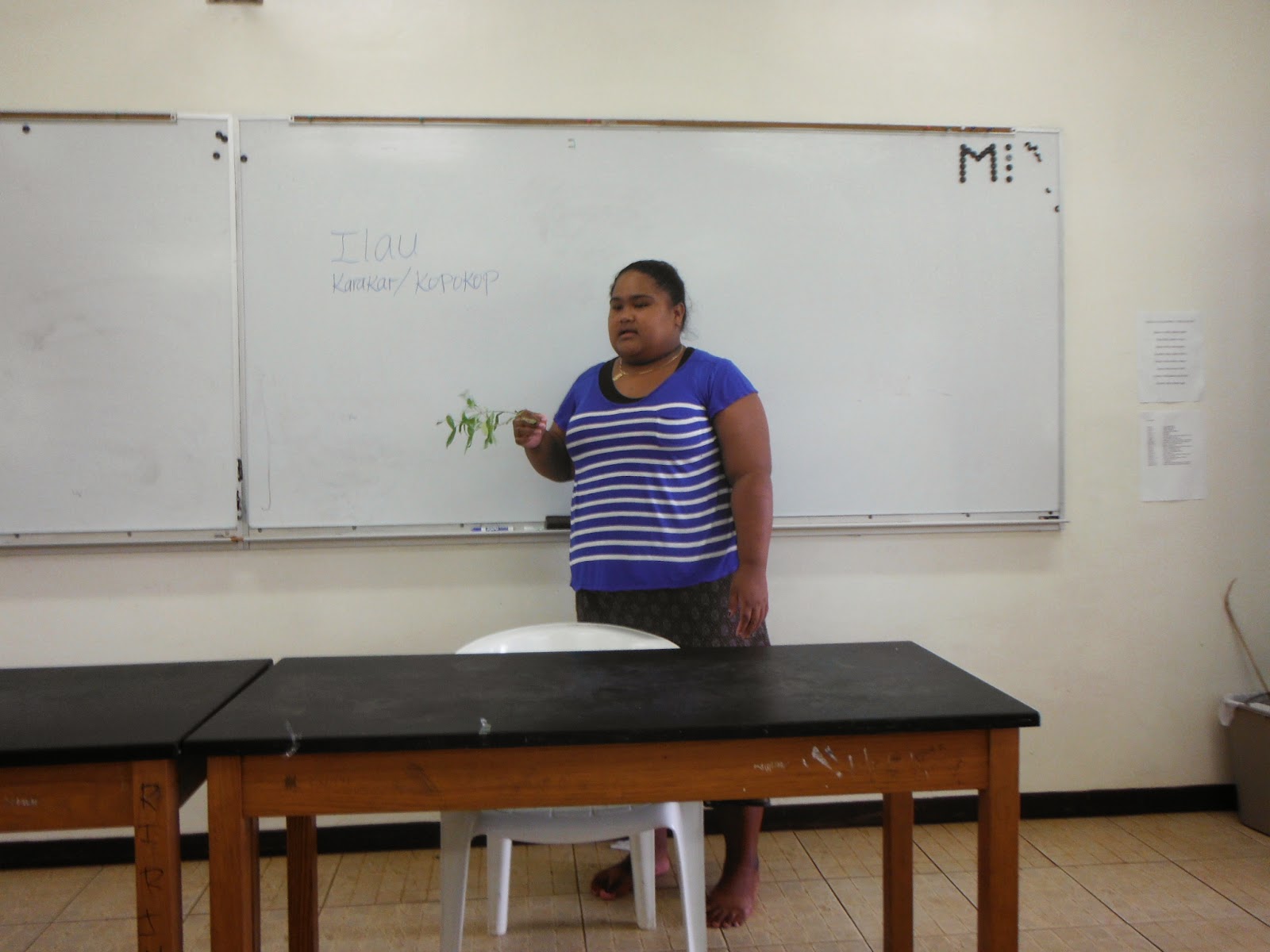 Ruthy Phillip brought in Clerodendrum inerme, ilau, which is used to treat fevers (karakar) associated with coughs, colds, and flus. Although the common treatment is to use the leaves in a steambath, umwlap, Ruthy's treatment was different. 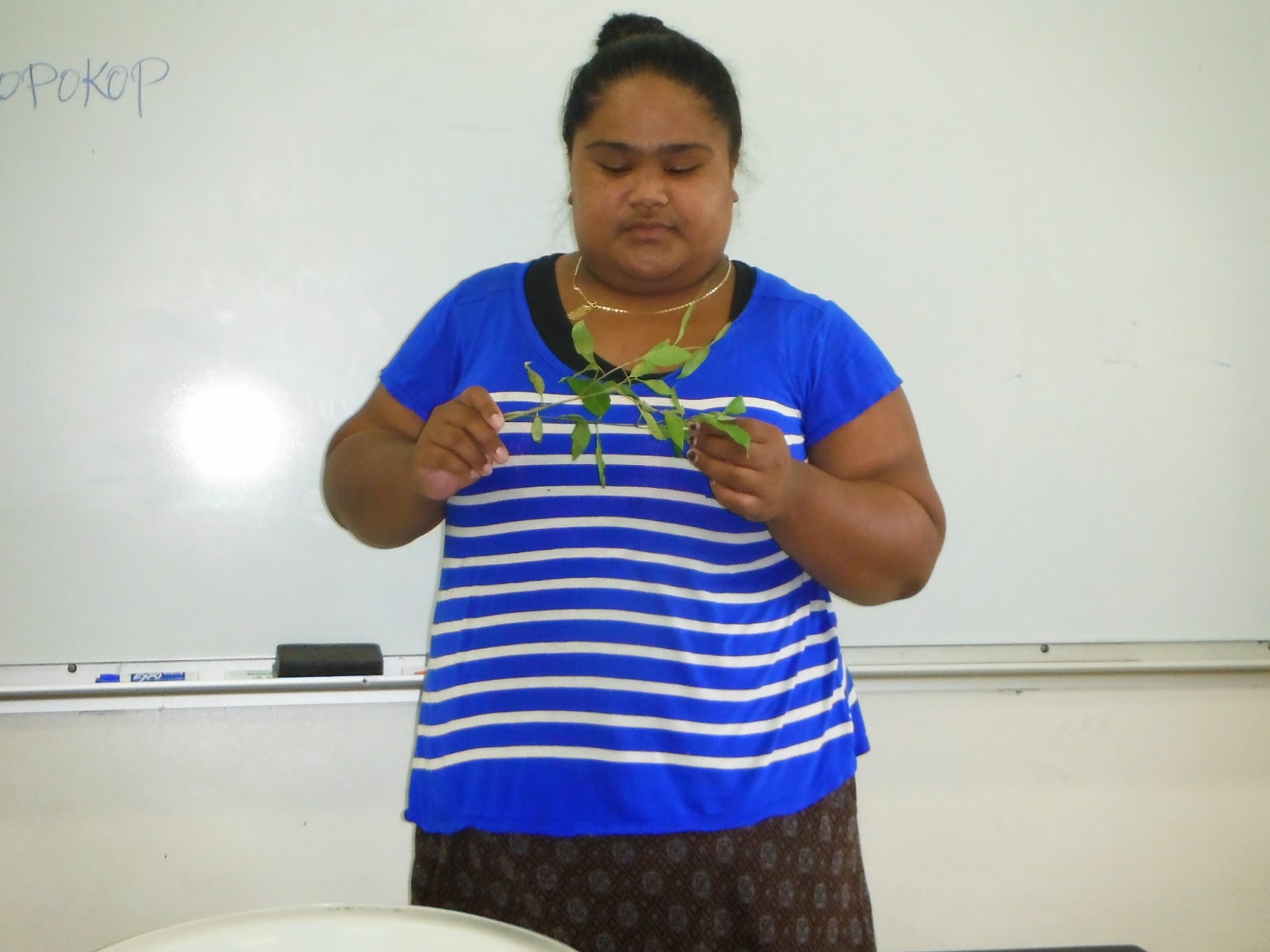 Ruthy prescribed making a garland of the leaves, oiling the leaves with coconut oil, and draping the garland around neck of a baby with a fever. This was interesting in part because babies cannot safely be steambathed. Ruthy went on to note that for an adult a steambath is more appropriate, and that the leaves of the lime tree (karer) and Piper ponapense (konok) be added with the ilau leaves to the hot water. The lime leaves make sense, the addition of Piper ponapense is not something I have heard before. The addition of Premna obtusifolia, or the oahr variety of Premna obtusifolia for which P. serratifolia might be resurrected, along with Morinda citrifolia leaves is a more often heard leaf mix. Ocimum tenuiflorum (O. Sanctum) is also often heard as an umwlapw addition as well. 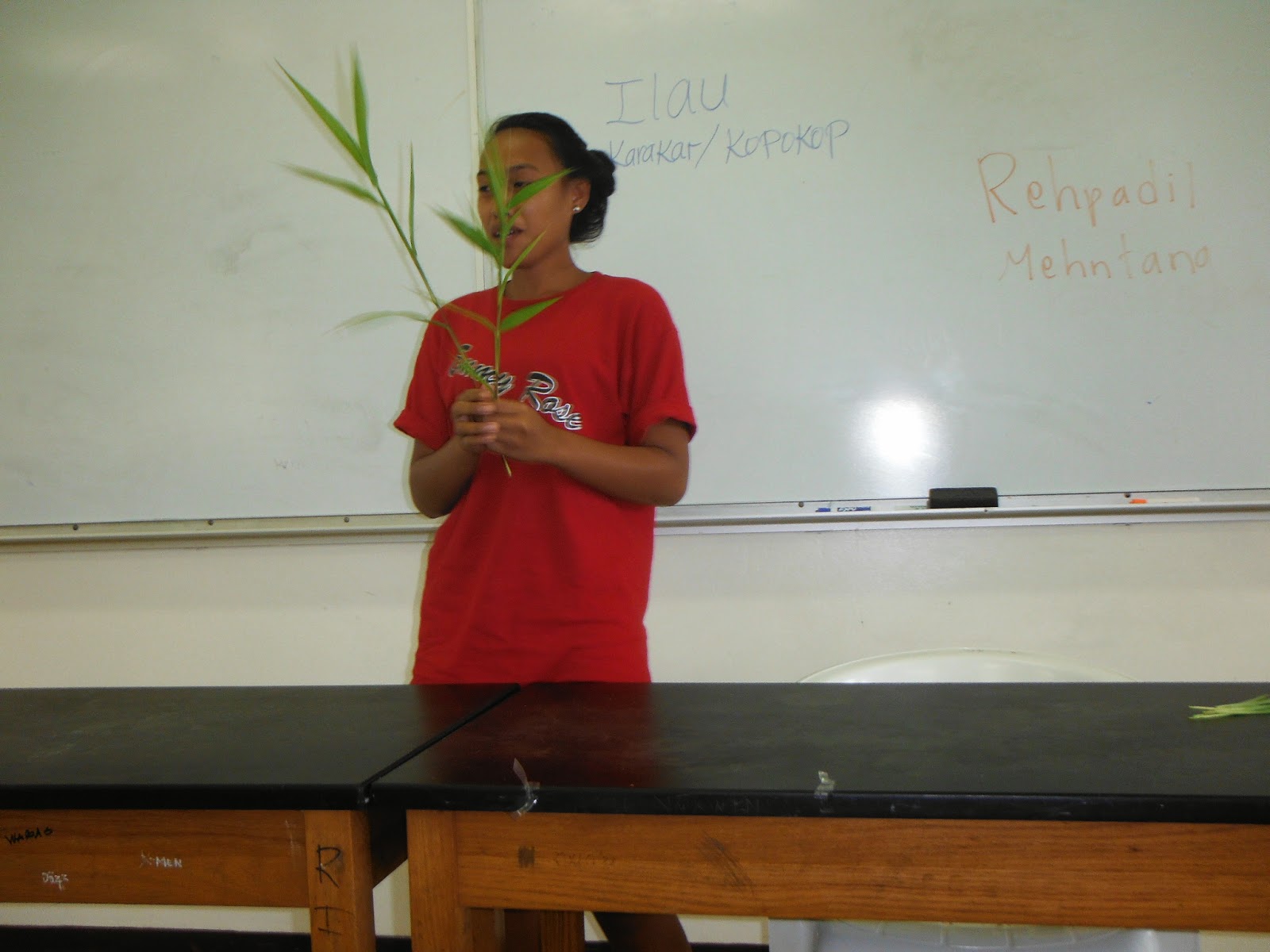 Shirley Ann Rudolph covered the use of the white inner core of Ischaemum polystachyum, rehpadil, grass to treat diarrhea (mehntang). 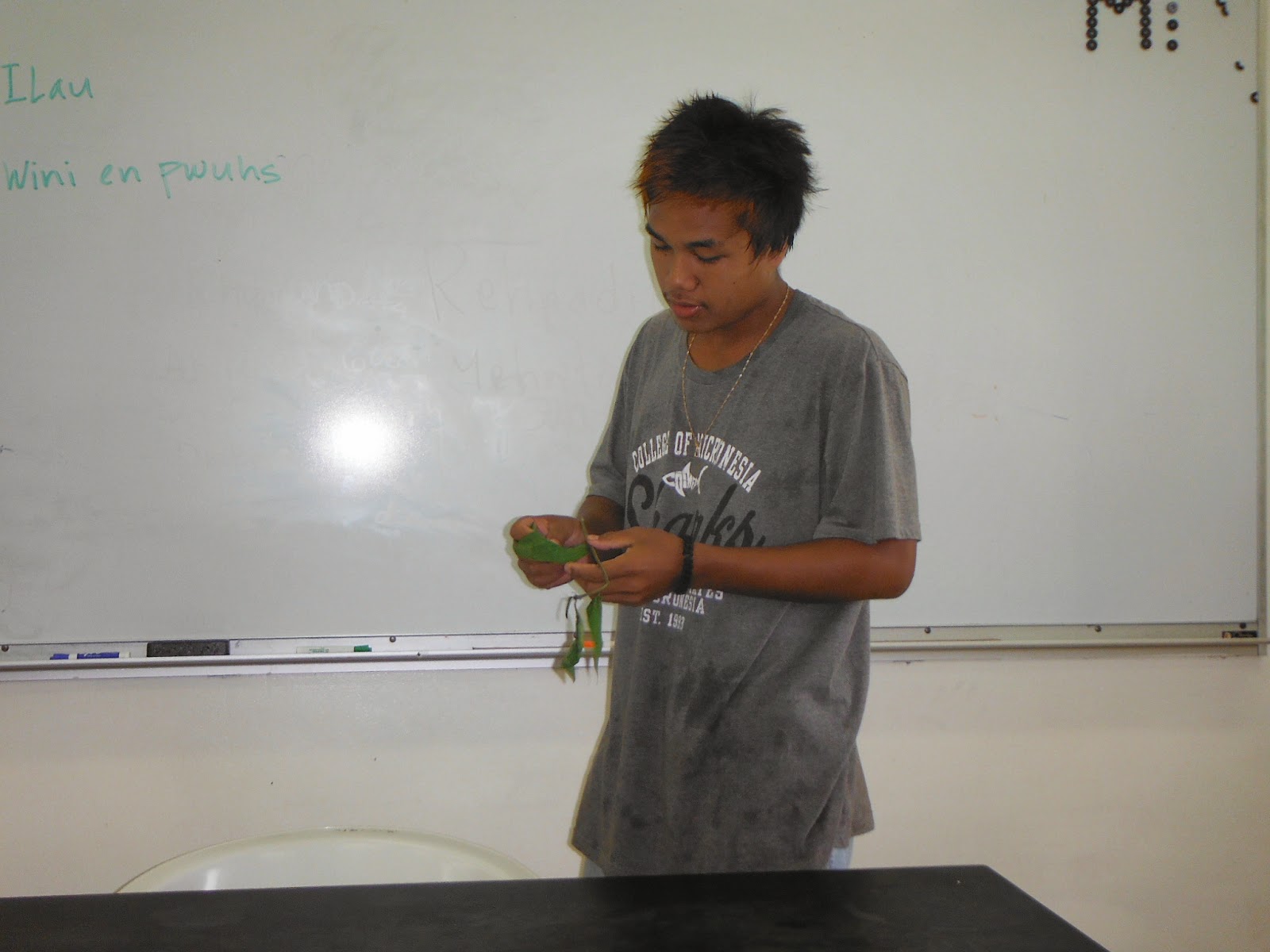 Kanio Torres spoke about the use of Clerodendrum inerme to treat what he termed "belly-button" sicknesses. After some discussion it became clear that "wini en pwuhs" while transliterating as belly-button actually referred to treating the cut umbilical cord of a newborn baby. 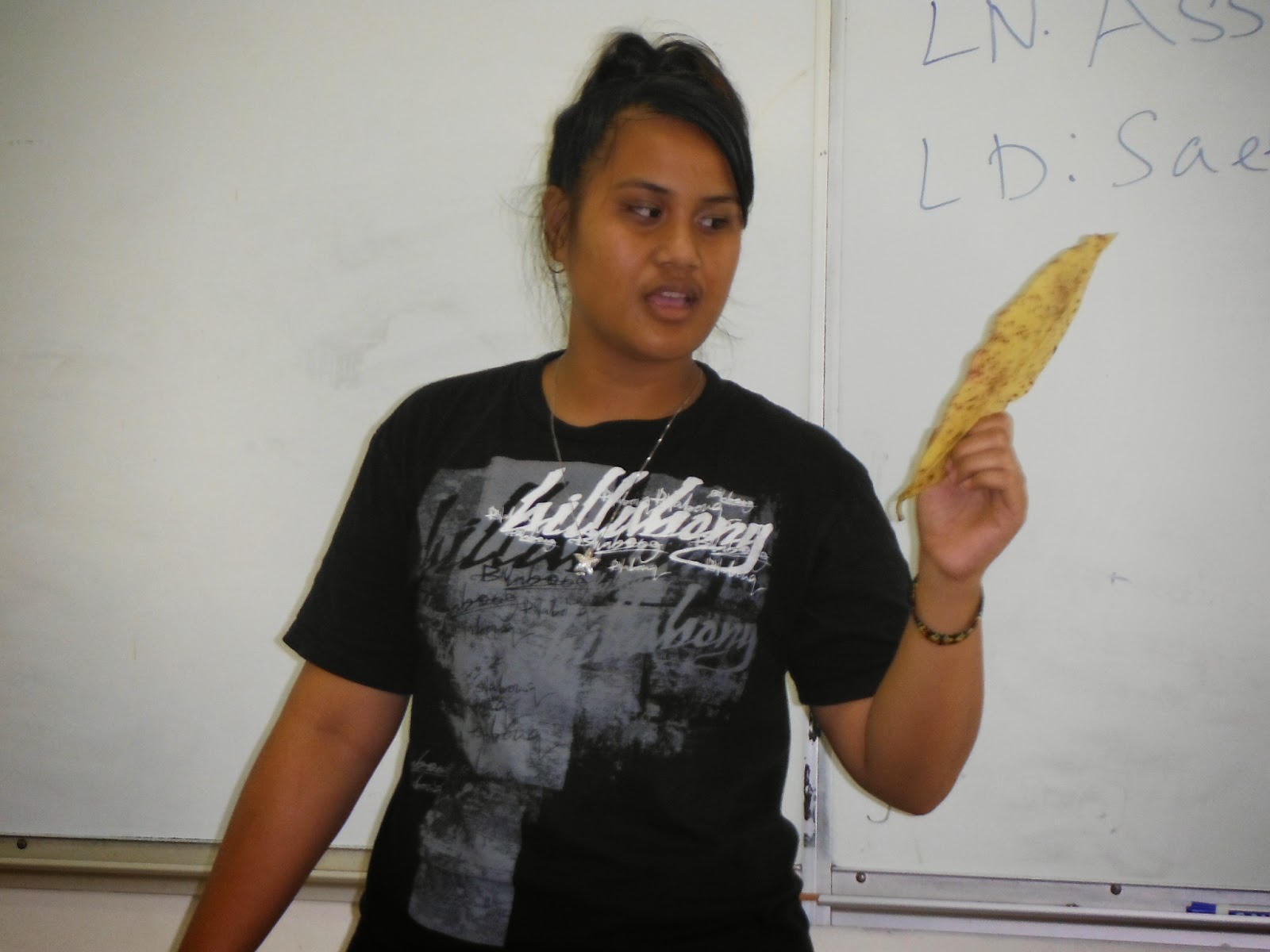 Virgina Sartilug from the outerilsands of Yap described how a decoction of the leaves of Terminalia catappa, assass, can be used to produce a stress relieving and muscle relaxing bath. She noted that muscle tension is referred to as metaeg tag. 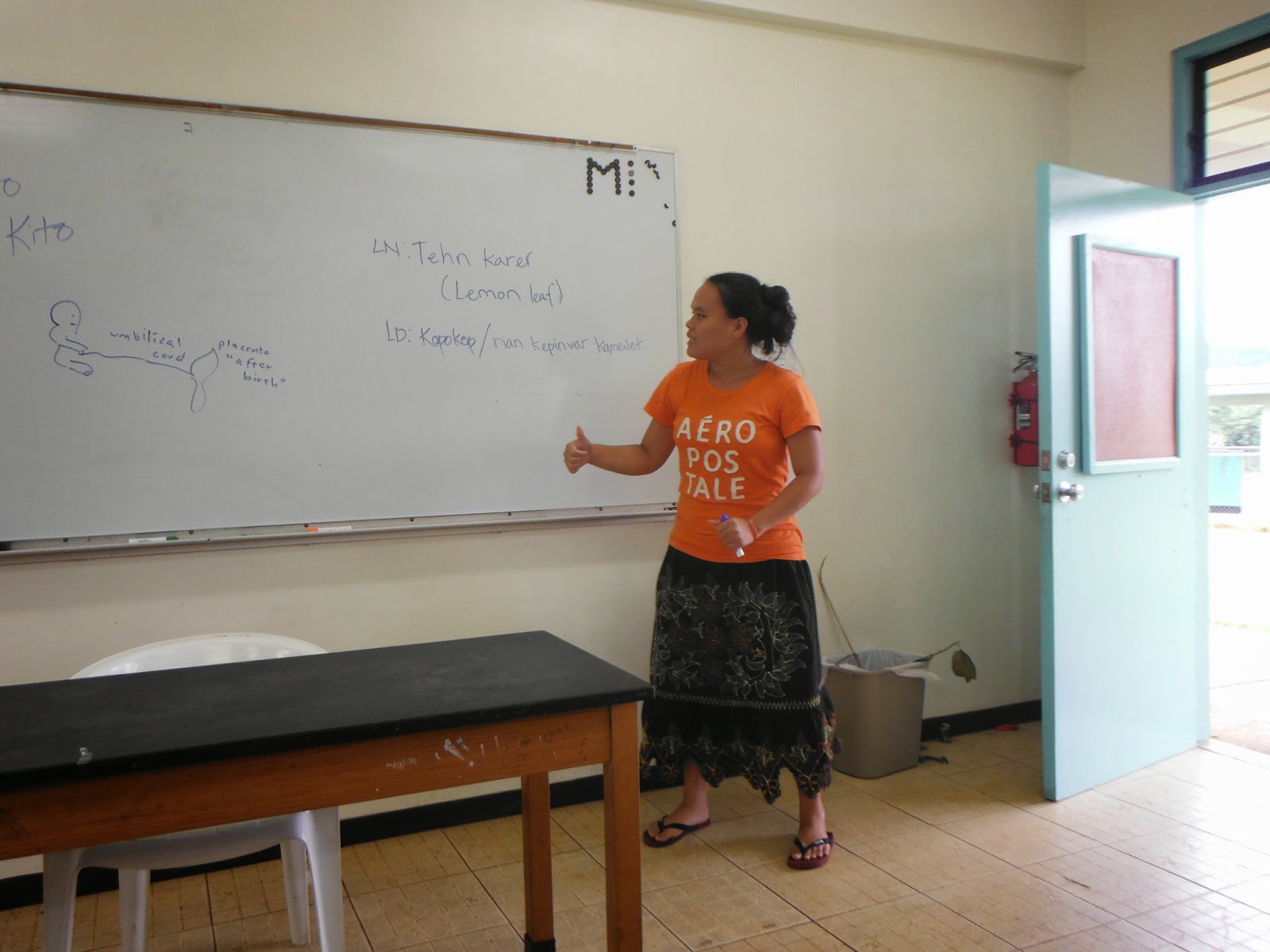 Stephanie Usiel gave an animated and entertaining presentation on the use of lemon leaf (tehn karer) for kopokop (cough). The leaves are used to make a tea to treat the cough. I prefer to just squeeze the juice of the lime fruit into hot water and drink that - never any sugar as that makes a cough worse. The hot lime juice concoction is wonderful for sore throats and coughing fits. 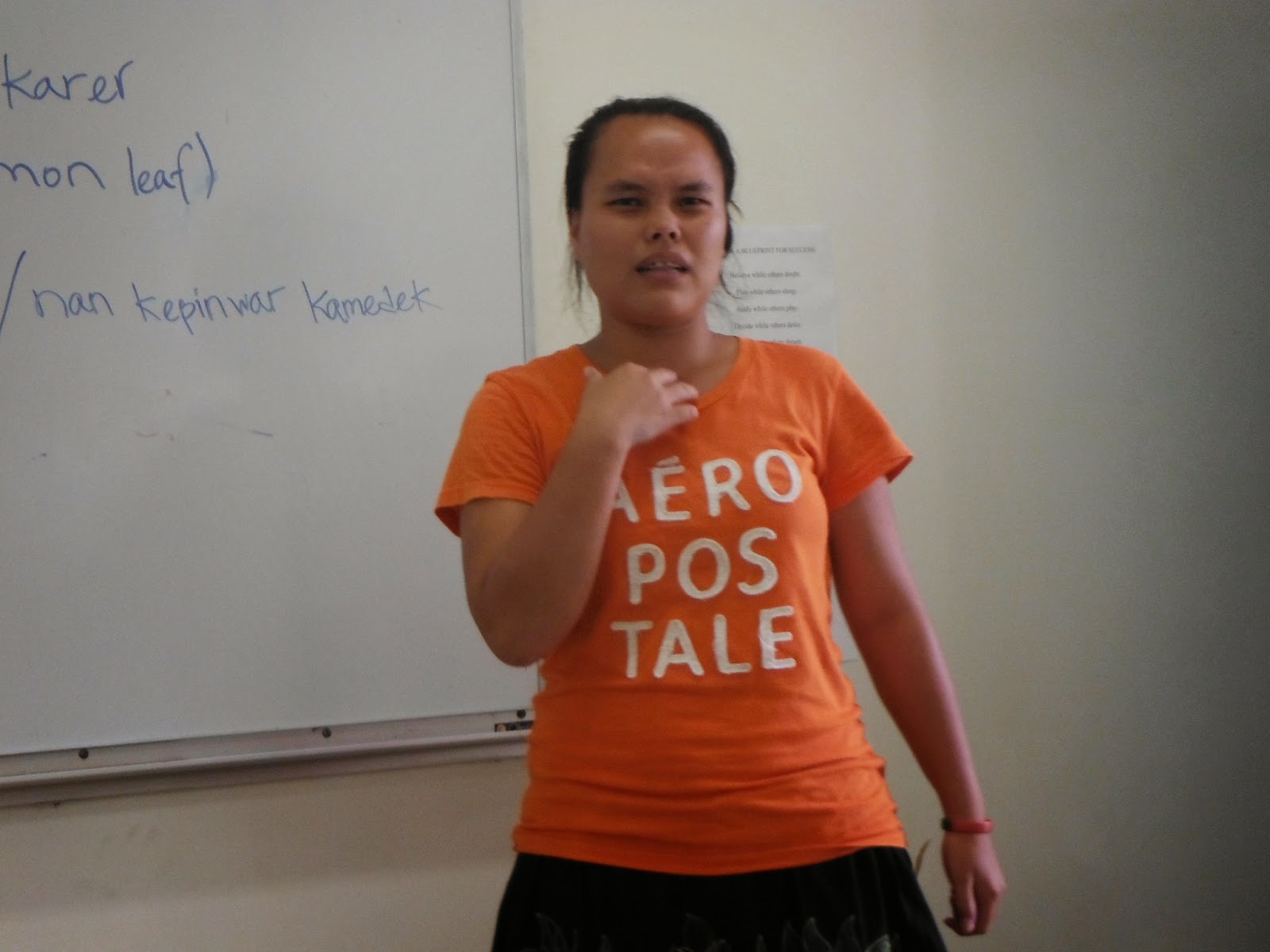 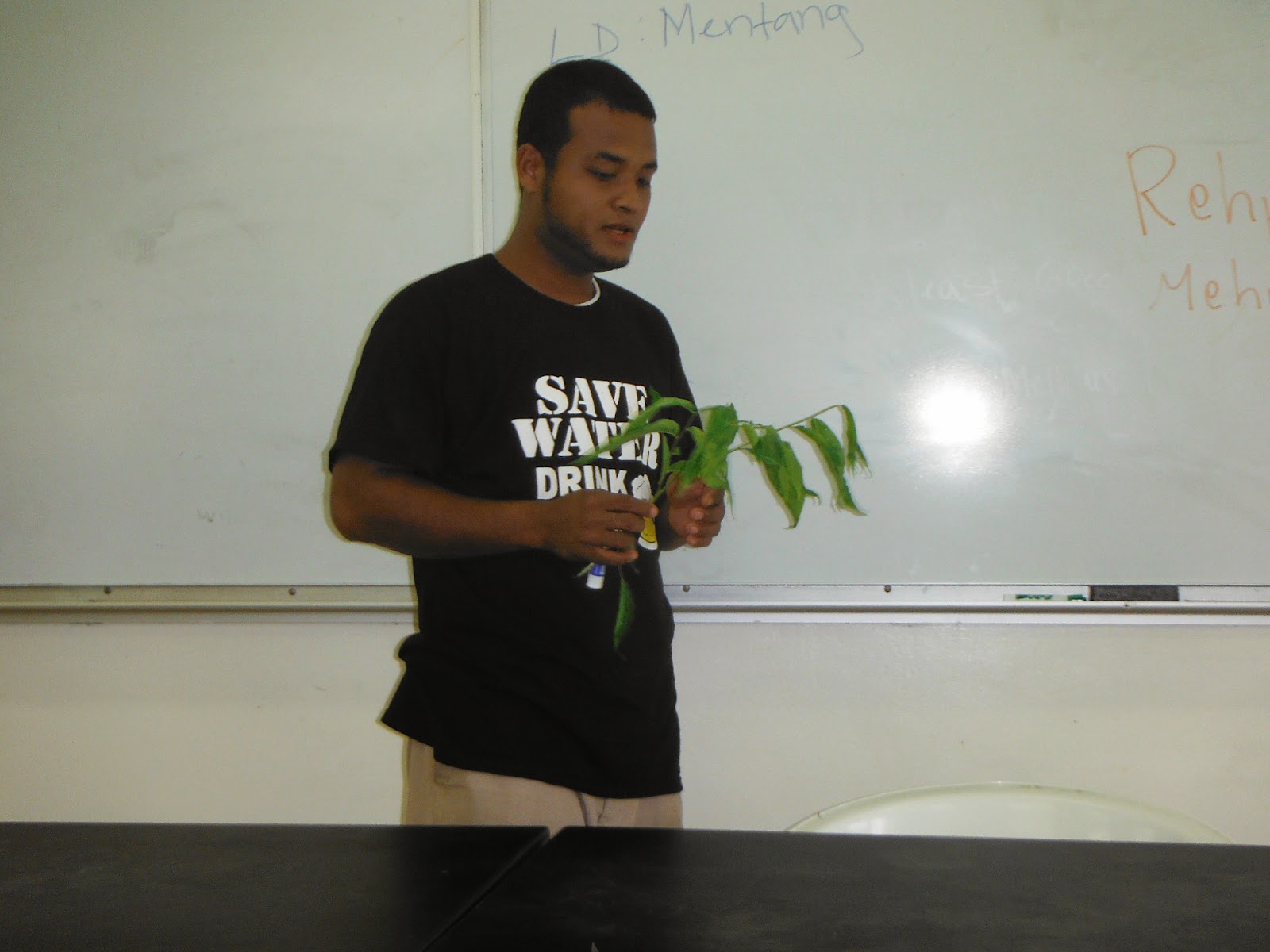 Rockson Salihk describes the use of mwehk to treat diarrhea. Four young leaves twice a day for four days. 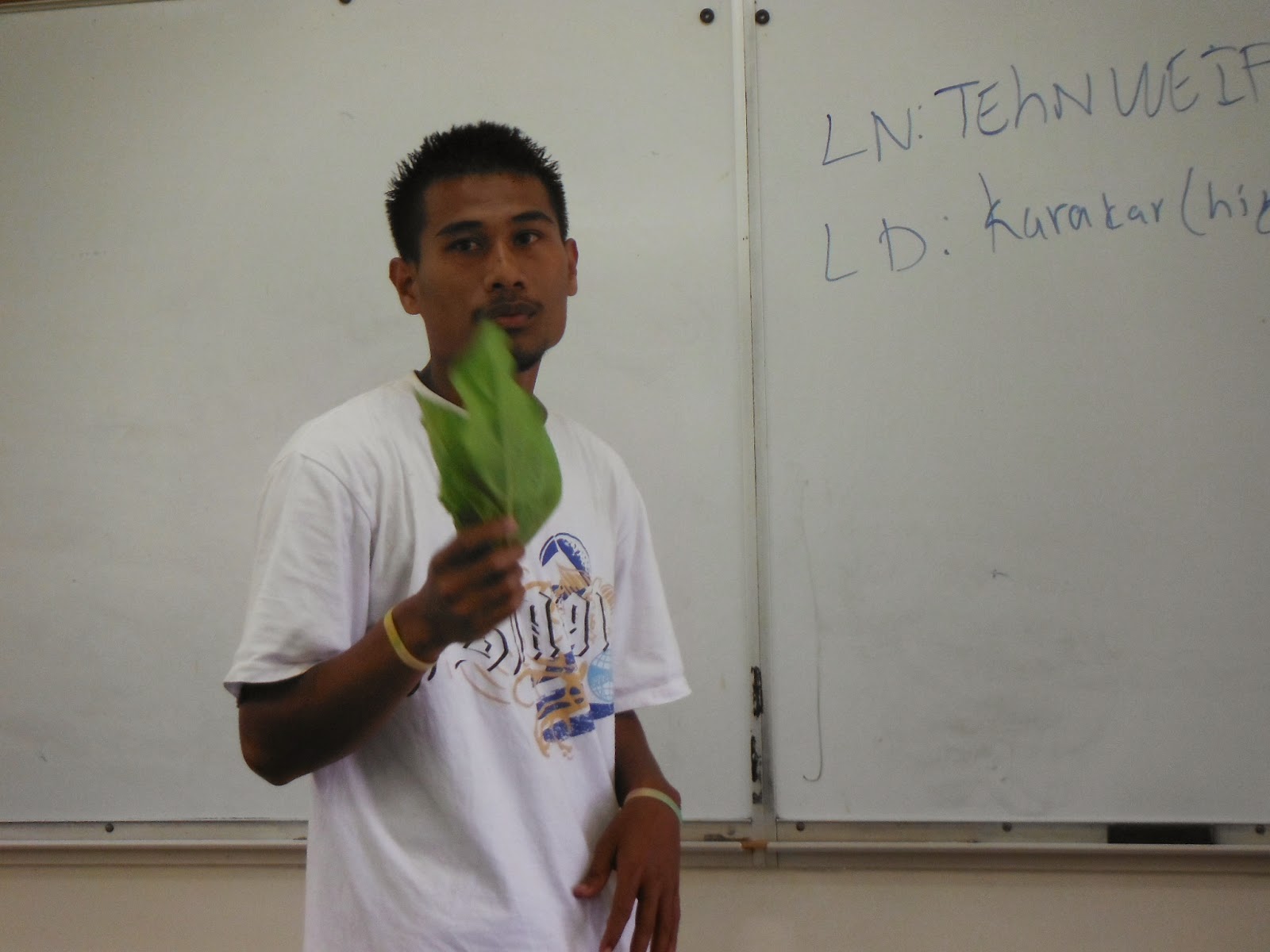 Joemaw Wasan speaks of the use of Morinda citrifolia, weipwul, to treat fever in a child between the age of one and seven months. Four leaves are applied, one on the head, one on the stomach, one on the back, one more in a location I did not catch. The child then sweats out the fever.