August 31, 2014
This term two students asked to meet the class at the trail head down by agriculture, and other were waiting down by the gym for the class. So at 3:20 PM I picked up moss with sporophytic spore capsules from the Premna obtusifolia on the eastern edge of the campus. I also grabbed a fertile Microsorum scolopendria frond and a Davallia solida frond. I knew a fertile kidou frond and ulungen kiehl would be harder to find on the trail. At 3:30 I was back at the classroom and headed west with the dozen students I found there. I found the cyanobacteria Nostoc at the east edge of the main parking lot along the drainage gutter. I put everything into a plastic bag. The one note for future terms is to bring more bags, smaller bags, clear bags. Everything was a jumbled mess by the time I reached the nan mahl. 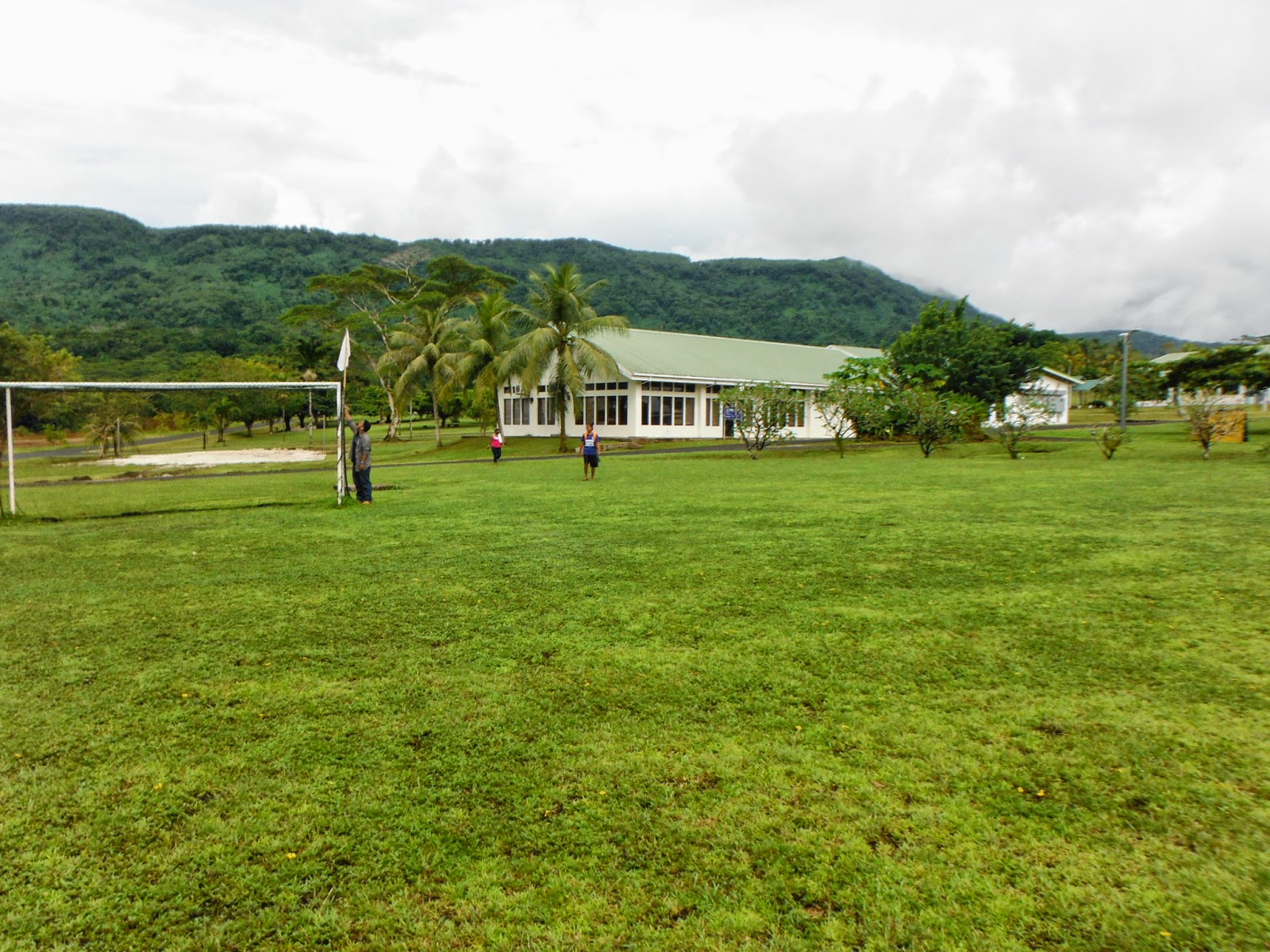 Heading west I took the most direct route, the students trailed in a broad arc. Up at the Lycopodiella cernua patch, which is increasingly well developed, I pulled out the Nostoc and began the lecture. This was the first time I had tried this approach. Nostoc was previously covered on day one, but the use of the second half of the period to introduce Schoology on day one has knocked cyanobacteria out of the day one lecture. This term the ethnogarden cleaning featured no cleaning whatsoever and turned into an introduction to the plants of the campus. 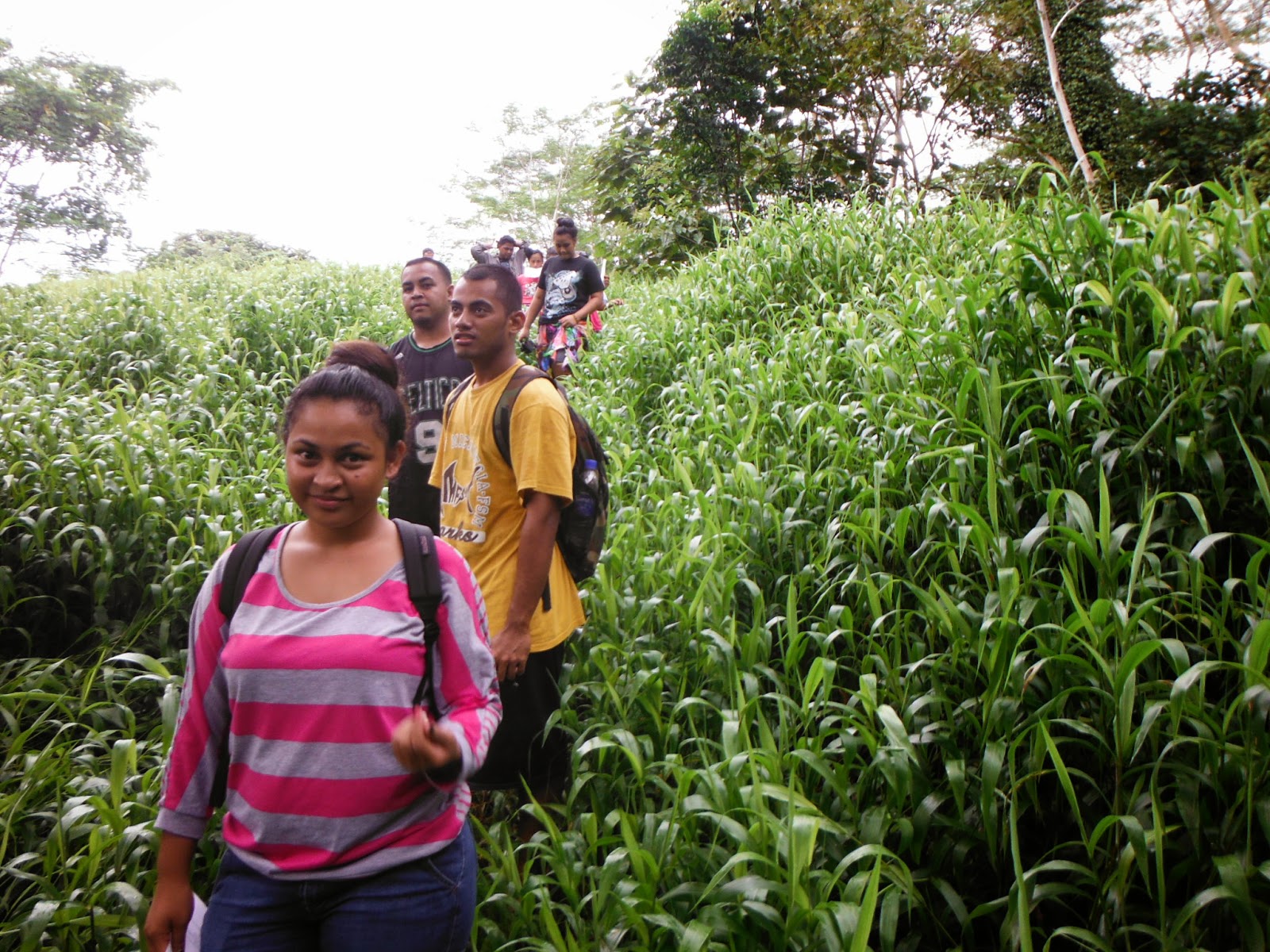 Melody Tulenkun on point coming down from the Lycopodiella cernua, Dicranopteris linearis patch. Jake Manuel behind her.

The long stop at the Lycopodiella cernua patch proved beneficial. Three different groups of late arriving students could hear my less than mellifluous voice from up at the agriculture parking lot and were thus able to find their way down to where the class was along the trail. When the stragglers complained about having been left behind, I noted that I left the A101 classroom at 3:30, at the class starting time. 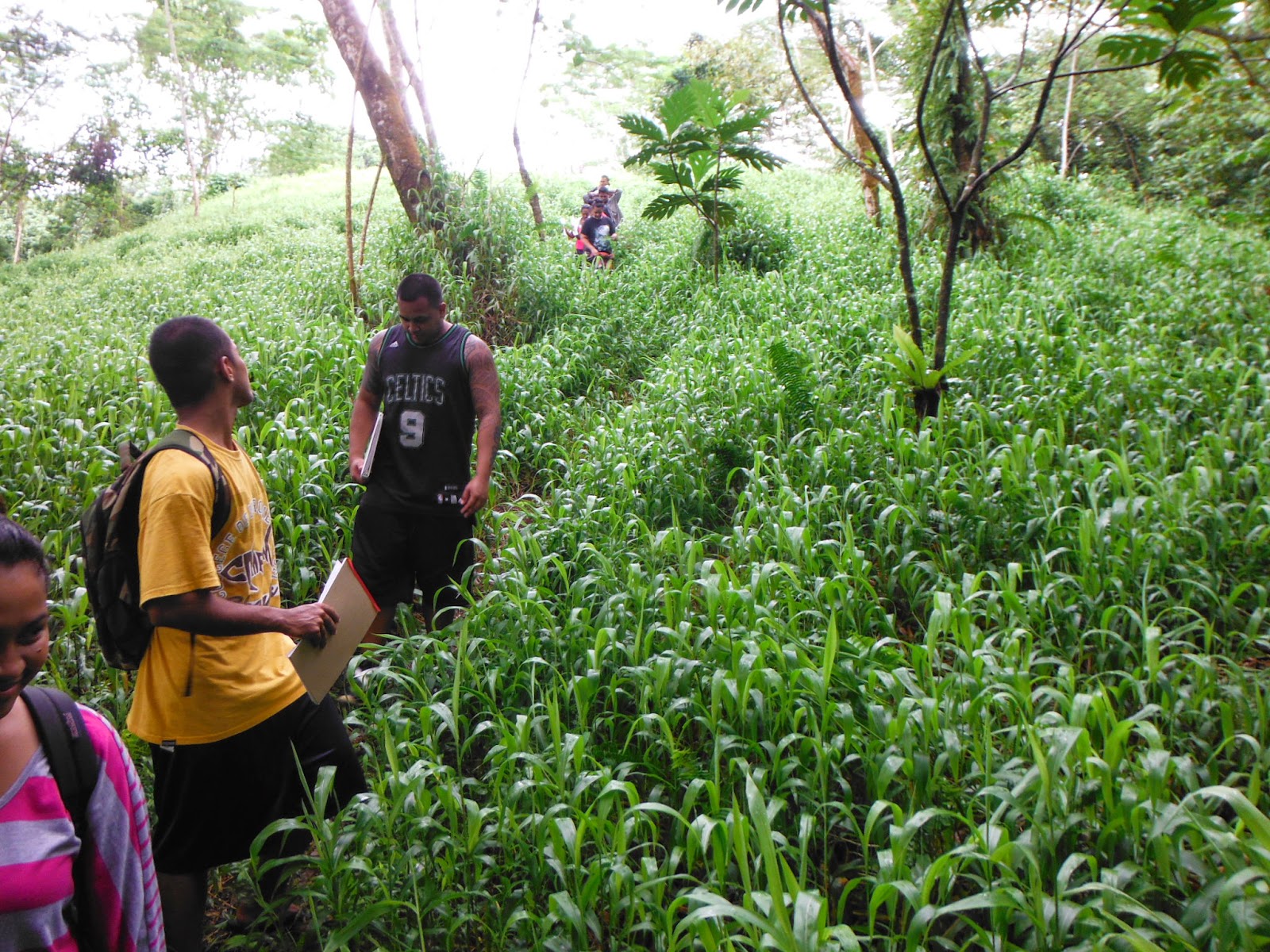 The trail does not look like such to someone not from here, but this trail is actually commuted on daily by many people.

The coverage of Nostoc, bryophyta, Lycopodiella cerna, and Dicranopteris linearis plus the associated terminology of spores, sori, cones, haploid, diploid, meant that the class did not leave the Lycopodiella patch until 4:14. 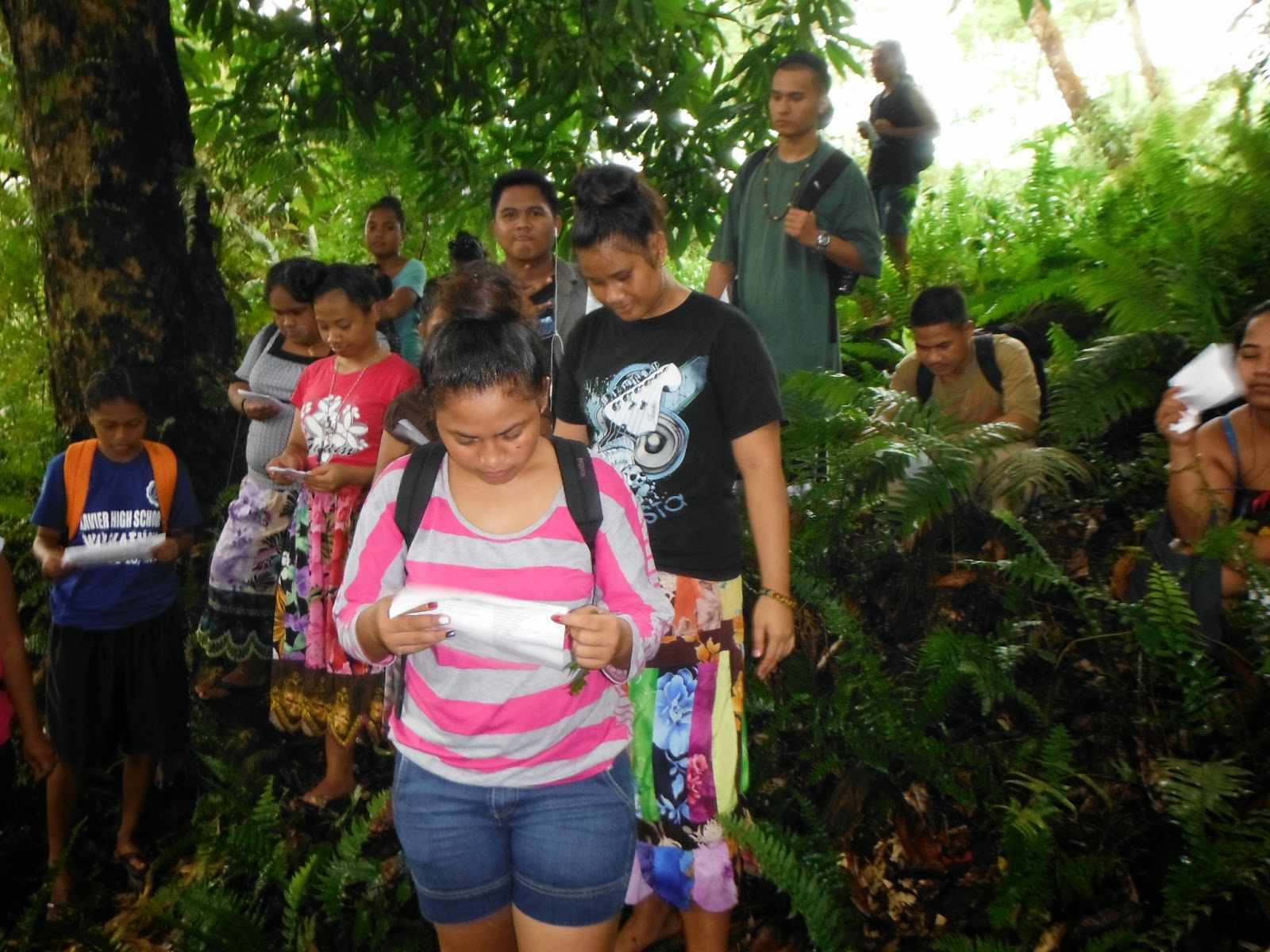 Melody studies the latest edition of the primitive plants list, a LibreOffice/OpenOffice document with the Latin and local names of the plants. A text copy of this list is included at the end of this blog.

At the top of the slope the monilophyte and lycophyte collection includes Nephrolepis, Cyclosorus maemonensis, Microsorum scolopendria, Huperzia phlegmaria, Haploteris elongata, and Asplenium nidus. A young Sphaeropteris nigricans has grown over the past decade such that I can now cover that fern at the steep slope top. This is particularly useful as this leaves only a few ferns to be covered in the valley, allowing me to excuse students with medical or physical conditions from descending into the valley of the ferns. 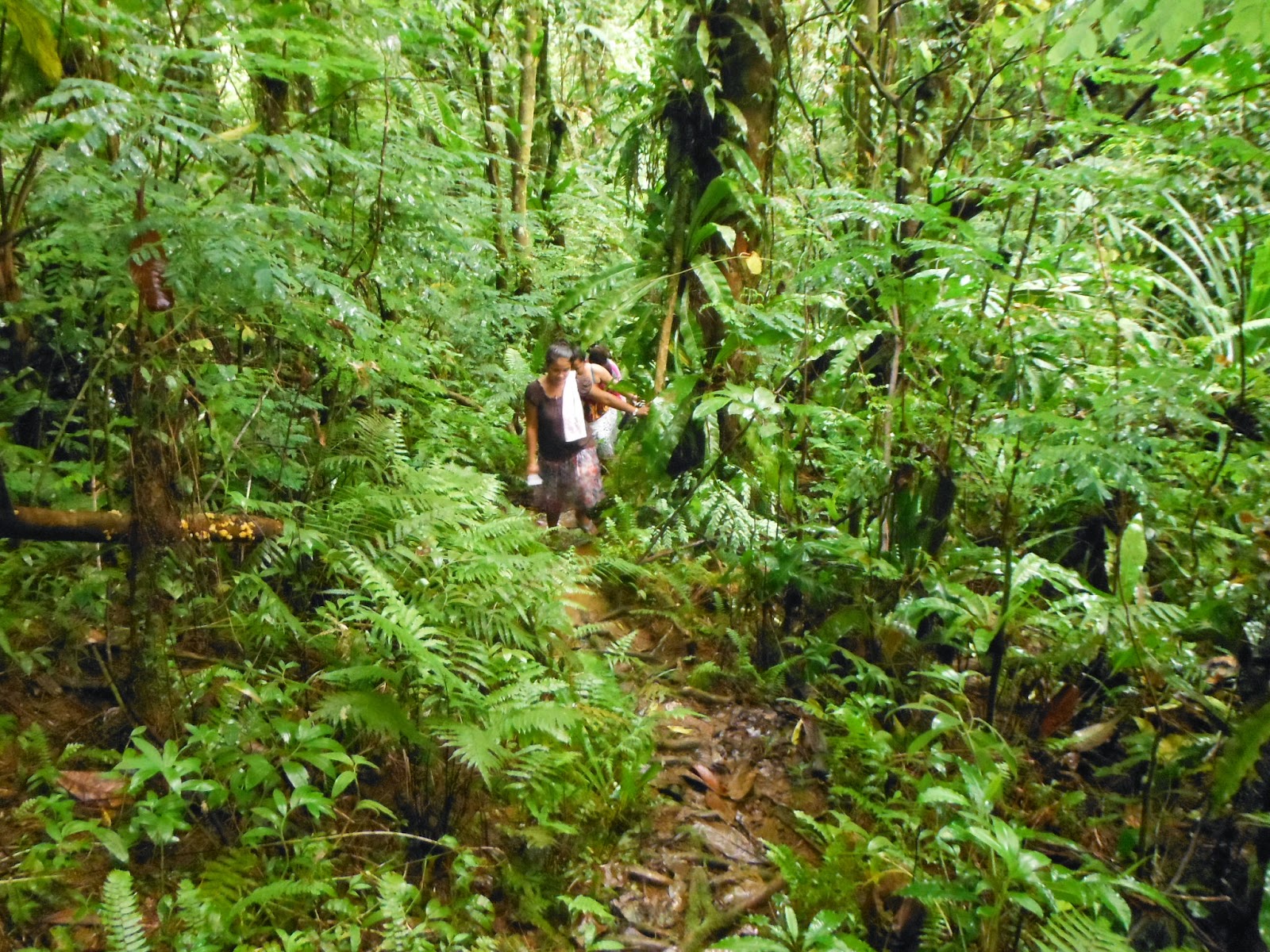 A couple meters down the steep slope on the right is a new Asplenium laserpitiifolium plant. A few meters further down slope is Asplenium polyodon. I did not see Davallia pectinata on this trip, the time was pushing towards 4:30 and I felt I did not have time to conduct a solid search for the small epiphytic fern.


Although the trail is used daily by local children and the elderly, the climb is steep and slippery. The slope will wind a person who is not in good shape and is unaccustomed to the high humidity of a rain forest. There is zero ability to cool via sweating, and the slope is steeper than it appears in photographs. The college does have students with medical conditions, some undiagnosed and not known to the student themselves. Hence this portion of the hike is not without risk factors. That said, the difficulty of the task helps begin to bond the class as a unit. 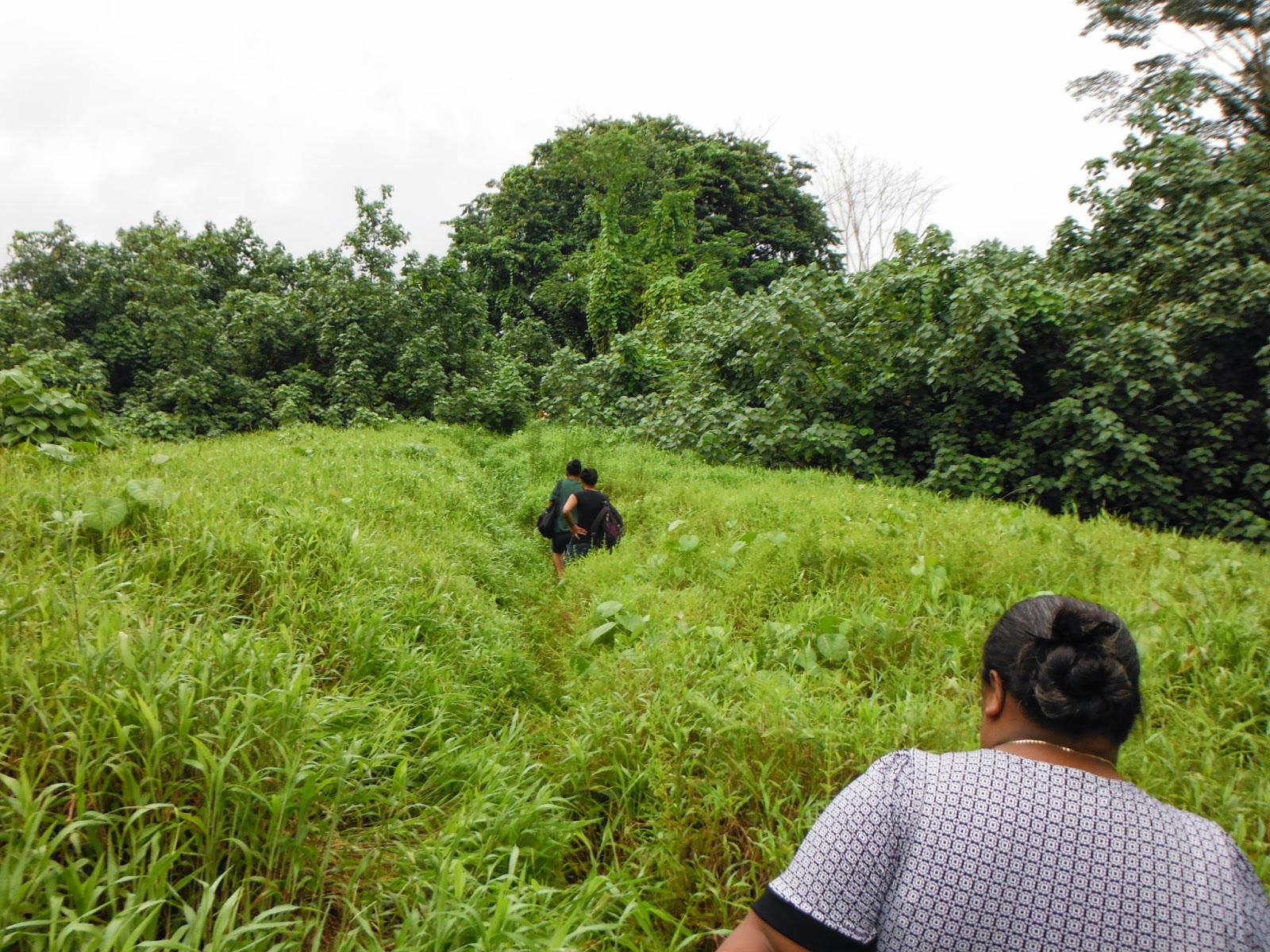 Heading out towards the Lycopodiella patch.