One faculty member noted that not only were their students disengaged, but on the order of half of the students had withdrawn from some sections of the faculty member's courses. A number of the students were out of the course due to excess absences, an ongoing issue in many courses.  I suggested that while withdrawal rates were high, the sheer number withdrawing seemed unusual compared to what I typically saw in my courses.

The withdrawals that were not due to excess absences were withdrawals due to low marks in the course, marks so low as to be unrecoverable. The faculty member noted that the students seemed to be unusually academically weak.

I decided to have a look at my numbers. I used to use spreadsheets to track grades, this term however I am using Engrade. I was not sure what I could report.

I started with 120 students, 30 in physical science and 90 in statistics. Seven students have withdrawn (5.8%), leaving 113 students enrolled in the two courses.

While grades are no measure of engagement, part of the high loss rate in the faculty member's course is a high rate of academic failure. Engrade does permit a rapid glance at grade distributions in a course. Would my courses also show high rates of failure based on grades? 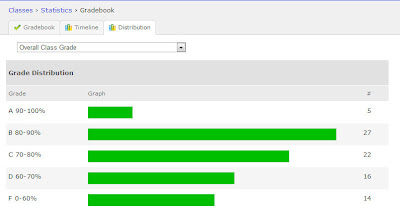 MS 150 Statistics has 14 of 84 students failing the course. That represents 17% of the students. While that is a high number, more than half of the class is indeed passing the course, and the mode is a grade of "B." 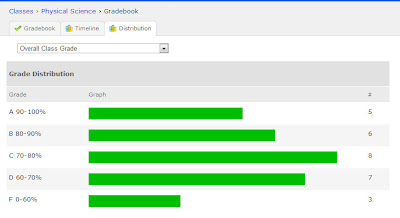 Neither of the grade distributions above suggests a particularly or unusually academically weak set of students in those two courses.

Engagement might only be measured by surveys such as the one's above. The faculty member I spoke to expressed a sense that they were being "coerced" into filling out the survey. The survey, and the implications in the questions, appeared to be threatening to the faculty member.

I am eager to see the results of the engagement surveys, I am rather expecting a low correlation between the faculty and student perception of engagement, but that remains to be seen.

I cannot measure engagement directly, but Engrade tracks student logins for my 113 students. 20 of the students in my courses logged in today, 50 others logged in yesterday, meaning that 70 of the 113 (62%) logged into Engrade during the last 48 hours. That is not a direct measure of engagement, but Engrade is a communication channel for these courses. Students check grades, submit assignments, and send messages via Engrade. The recency of logins reflects indirectly the frequency of logging in, which can be taken as a pseudo-measure of engaging with the course. I would argue that the high rate of logging in on a weekly basis is indirect evidence of engaging with the courses. 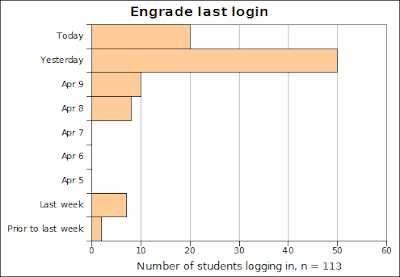 Engagement represents a difficult change in world view for those wedded to the "sage on the stage" model of content-driven lecture education. The instinct is to feel threatened and to lash out at the changes in education. Ultimately education shifts and changes with the passing of generational time scales. The sage struts and frets his hour upon the stage and then is heard no more, with apologies to Shakespeare.
assessment education