January 15, 2013
A convenience sample survey of online email, social media, and online storage preferences was administered to 80 students in MS 150 Statistics at the College of Micronesia-FSM.


Number of students with membership in the listed site by term Note that the columns do not add to the sample size as students can have multiple memberships. 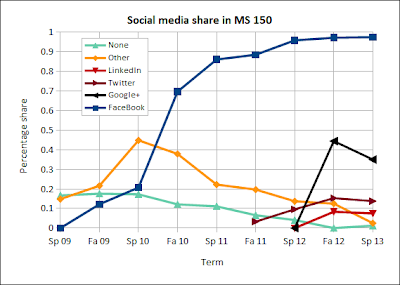 FaceBook continued its dominant position among students in MS 150 statistics at the college, with 78 of 80 students having a membership in FaceBook. Of the 80 students, only one student listed no social media membership.

Spring 2012 no student named Google+ in their responses. By fall 2012 thirty-two students listed Google+ membership. Google+ had seen the strongest relative growth among the social media sites used by students who are now enrolled in the statistics class. The downturn in Google+ membership this term is not statistically significant. 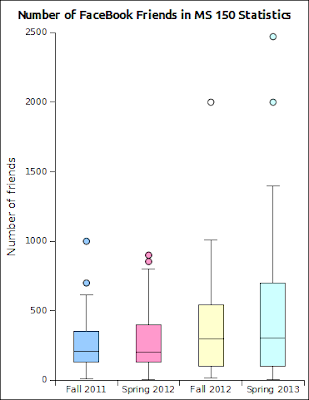 Social media remains a prime mover of social communication for the students, at least based on the students in statistics class this fall. The numbers of friends to which they connect is increasing.

This term the survey also explored the extent to which students use online "cloud" storage. The following table is based on the same survey of 80 statistics students.

Although the numbers are small, there are students who use online cloud storage.
statistics tech