One Laptop Per Child Kosrae

January 07, 2013
About six years ago I recommended that the FSM explore the proposed One Laptop Per Child effort. The then secretary for education said, "Our students need textbooks, not computers." As the project was nascent and naysayers were predicting failure, I let the matter rest. One of the states in the FSM, however, decided to join the project. Kosrae joined the project and is in their second year of using the little green and white computers. My trip to Kosrae during the Christmas vacation was my first chance to get my own hands on an OLPC. That is, when it was not in the hands of a child. 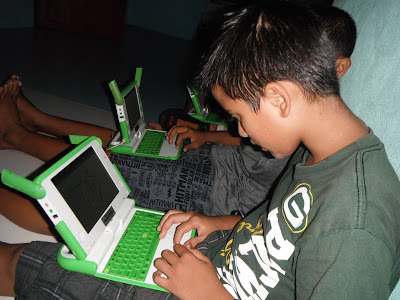 Every night the children in the household worked on their laptops. Every night. During Christmas vacation. The activities on the OLPC are constructivist, discovery learning oriented. This meant that the children were engaged in learning. During a holiday. Children do not of their own accord open their textbooks every night while on break. Quite frankly, children probably never crack open a textbook while on holiday. Yet the laptops were in use nightly. The school system had effectively expanded the number of hours of learning. 180 class days plus every single evening. I had not anticipated this occurring, but I saw it in action.

The laptops are very intuitive for a child. The Green Bay Packers fan above is a visiting cousin from Pohnpei. He sat down on his very first night and was able to engage in learning activities without any guidance or training. 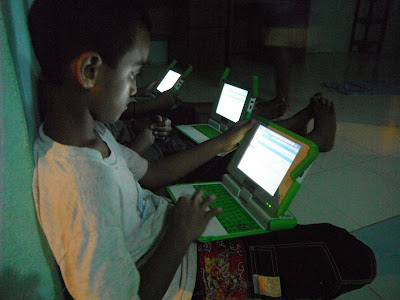 Minus the flash, one can see that the children are actually working in semi-darkness. To conserve cash power the family usually lights only certain critical areas of the home. The OLPC provides its own light. The "ears" are apparently antennas for short-range impromptu serverless computer-to-computer peer networks. 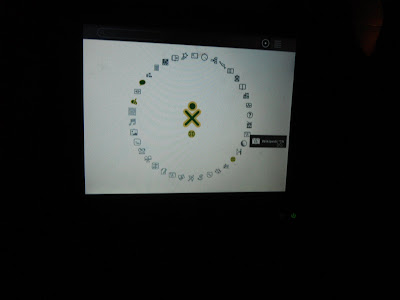 During the two weeks on Kosrae I became familiar with this activities screen. Although the machine is intuitive to children, only after a week of use did I comprehend the journal as a file storage system. I kept looking for "Save" and "Save as". 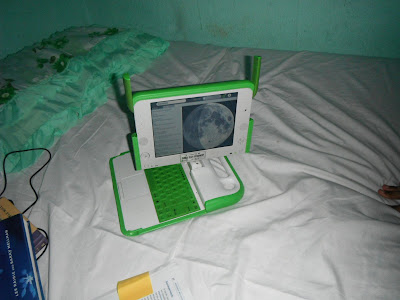 The XO lap top has a swiveling screen that can be rotated 180 degrees and then folded back down onto the keyboard in a tablet format. While the XO 1.5 and 1.75 do not have a touch screen, the XO-4 Touch is slated to include a touch screen.

The machines must be rugged as they are in a household near the windward beach - the air is filled with salt and saturating humidity. Yet the machines continue to function. 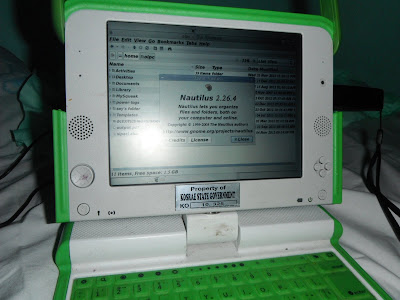 I eventually discovered the terminal activity and discovered that Gnome was on board including Nautilus. I also learned that under the Sugar OS is Fedora Linux.After a bit of poking around I learned that the machines include Abiword and Gnumeric - although Gnumeric has had the statistics menu trimmed out. Both can launched from the terminal. I was rather excited to see Gnumeric as this is the software I have increasingly used in my MS 150 Statistics course. I was also please to see that the two packages, running under Gnome, had all of the usual menus. I showed an eighth grade in the family how to save documents as Word files from Abiword to a flash drive so the file can be printed from a Windows computer attached to a printer. 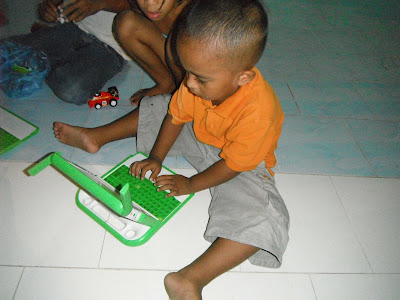 The laptop interface is navigatable by a three year old. The three year old above has some limited experience on Lubuntu on Pohnpei. He was among the children visiting Kosrae this Christmas and had no prior experience with the OLPC. He quickly translated what skills he had on the Lubuntu rig to the OLPC. 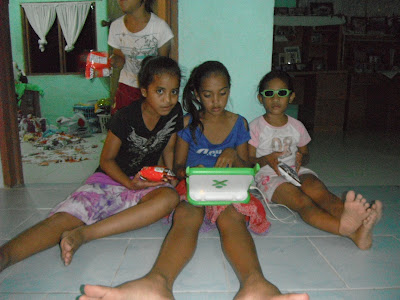 Here another visitor from Pohnpei works on the OLPC. 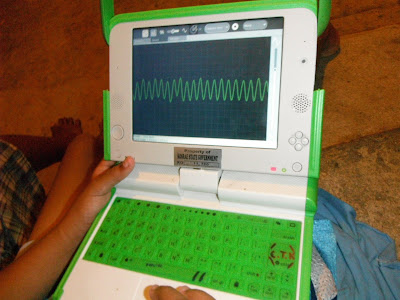 For some activities the children were unclear as to the intent of the activity. In the activity above the built-in microphone is being used as an input to an oscilloscope program. I showed the children that whistling would generate a clean sine wave. Then I showed them how pitch/frequency and volume/amplitude were interrelated. This is an experiment I cannot do in Pohnpei for a lack of the appropriate equipment. I immediately wanted eight laptops for my college physical science class - they are cheaper than oscilloscopes! 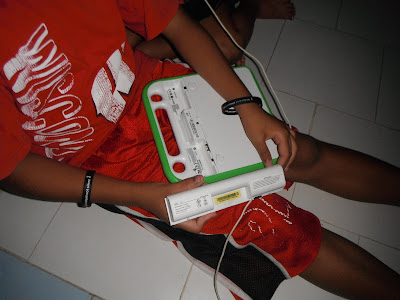 In the above image the battery pack can be seen. The batteries are 18 months old, 18 months of hard service, and are showing their age in their slightly shortened power duration. 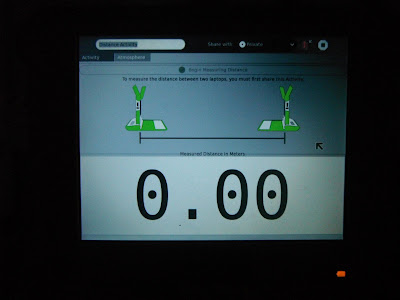 Among the unusual activities that caught my eye, this one fascinated me. Two laptops can determine how far apart they are - wirelessly. This is called the measuring activity. 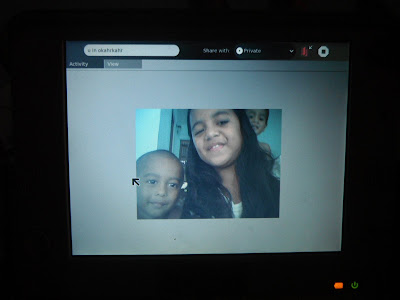 The laptops have a built-in camera along with the microphone. 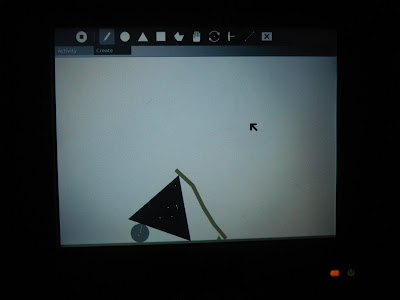 I played with the physics activity the most. In this activity one draws objects. There is "gravity" and the object fall down. Objects have momentum and conserve that momentum, both linear and angular. And there is friction too! Way too much discovery fun.

The red battery light (lower right in the above image) indicates that the battery is in need of recharging. 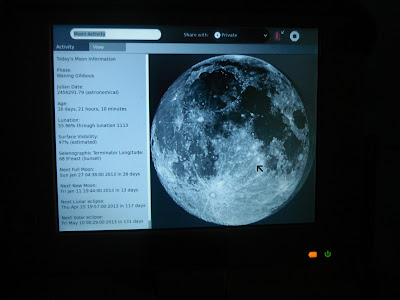 My son enjoyed the moon activity that showed the current phase of the moon and the times of moonrise, moonset, sunrise, sunset, and tidal information. 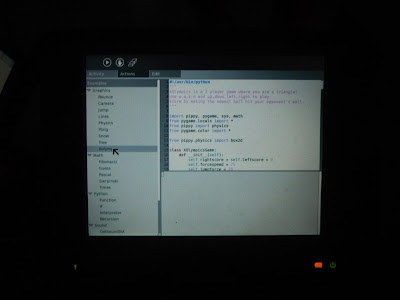 There is also the ability to write programs in a variety of languages. The simplest use visual symbols which one drags and drops to form programs. In the above the Python language is used. This is an advanced activity. 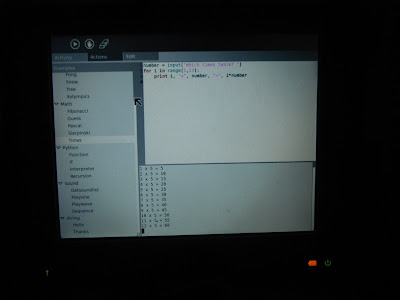 A simple program in Python. 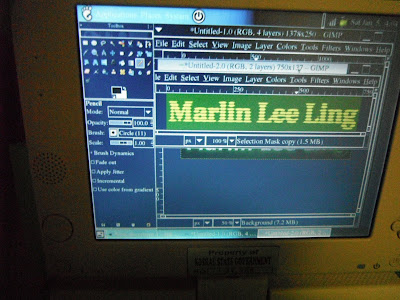 My son also learned to launch the full version the Graphic Image Manipulation Program from the terminal. Images taken with the camera could be edited using GIMP.

I was impressed both with the laptop and with the way the machines had surreptitiously expanded the number of hours of learning and discovering. There are many other activities including writing and reading that engaged the children during the break. The built-in Wikipedia was a handy encyclopedia in a home that had no such books.There are over 50 different activities on the laptops. Some are aimed at the youngest users, others at older users. And for the most advanced, there is Gnome, Abiword, Gnumeric, and GIMP on board.

Kosrae has one laptop per child and many laptops per household. The machine is transformative of what can be done both in the classroom and outside of the classroom. Sadly only one state in the FSM had the vision to enter the project. And even in that state the question of sustainability remains unclear due to the financial situation Kosrae state finds itself in at this time. I only know that my children now want an OLPC of their own and miss their evenings of learning in Kosrae.