January 18, 2013
On Tuesday in SC/SS 115 Ethnobotany I brought in three plants, Cyrtosperma chamissonis, Citrus aurantifolia, Premna obtusifolia, and Barringtonia racemosa (with inflorescence). This led to an early introduction of the term "devolution" in the class.

On the previous Tuesday I instructed the SC/SS 115 Ethnobotany students to come without books and backpacks if possible for the first hike of the term. As I have done the past few terms, I did not even open the classroom, leaving at 3:30 sharp and heading west. 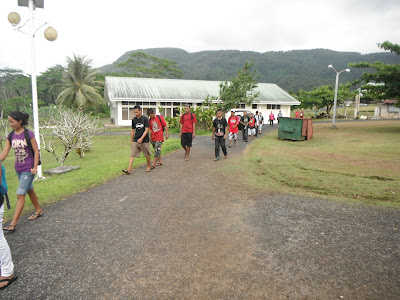 The class is already strung out along the sidewalk.

On the way to the trail head I did not see any moss and realized that this left time for a slight detour. I went south of the gym and headed up the trail that takes off from the southwest corner of the gym parking lot. I then pushed through the razor grass over to the small valley in which I once found Psilotum nudum. Plants had been seen fall 2009, but not since. There were still no plants.

I then headed through the Hibiscus tiliaceus tangle to intercept what is now a new entrance to the trail I have long used. 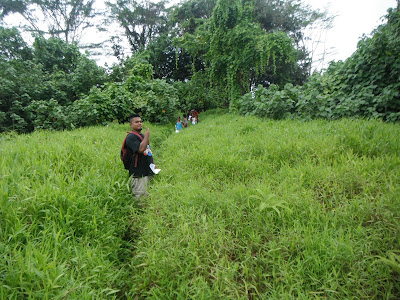 Mchiver on the trail out into the open grassy knoll.

The  Lycopodiella cernua has very strongly recovered and spread on the hill. I also covered the sun-loving fern Dicranopteris linearis. 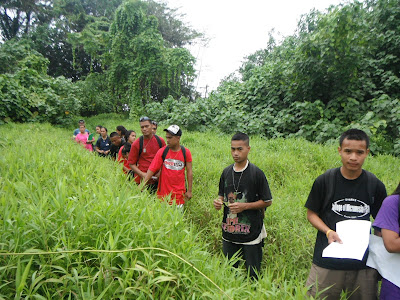 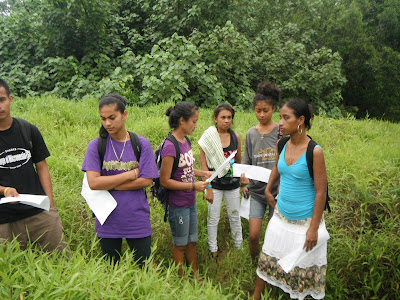 Roxann in purple, Cheryll in black over white. 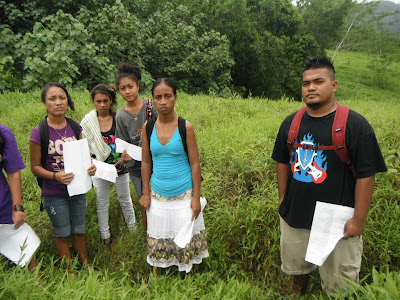 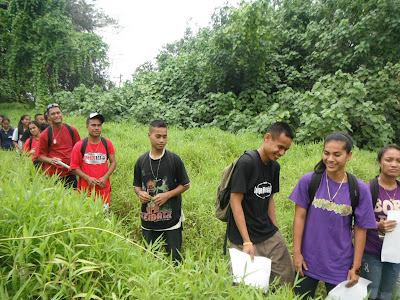 The class then paused at the top of the steep slope where Nephrolepis spp. and Cyclosorus maemonensis were observed and discussed.

Local uses and meanings of these plants was also discussed, along with names in the local languages. The local names for Microsorum scolopendria, its use as a mwarmwar, and the function the plant had as a mwarmwar in protecting the dancer from kau (soumwahuen eni) were covered.

Also on the tree at the hill top is a developing and large clump of the epiphyte Huperzia phlegmaria. I now ask the students to not collect epiphytic plant samples to preserve what we have. A large Huperzia is also on a tree in the valley.

Sphaeropteris nigricans (Cyathea nigricans) is also now covered at the top of the hill as the young plant up there has grown sufficiently.

I could not locate Davallia solida (ulung en kieil) on top of the hill, and did find any in the valley either. There is a nice clump on a dead tree trunk north of the cultural huts. Should be some in the garden. On that same tree is Haploteris elongata (Vittaria elongata). Due to past over harvesting I do not mention the use of H. elongata. 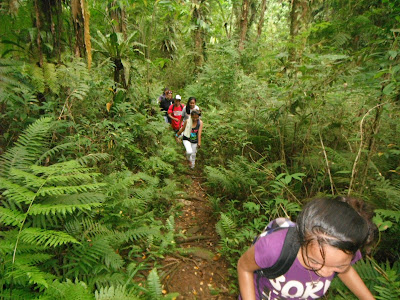 Asplenium nidus was encountered as we descended the slope as was marekenleng. The marekenleng on the slope did not have sori, but plants in the valley had sori. The valley plants, however, appear to all be dying. Not sure why. Marekenleng plant is currently listed in the virtual herbarium as Asplenium polyodon. 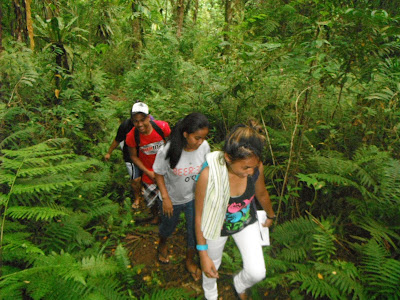 Cheryll on the lead on the slope

I then took the class down to the river and up to the Antrophyum plantagineum. We reached the A. plantagineum around 16:15. Although this has been the end of the hike in prior terms, I moved on to the Angiopteris evecta that a student pointed out to me last fall. This plant has developed over the years and now makes a good end to the hike. 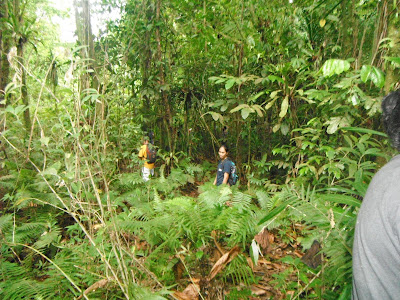 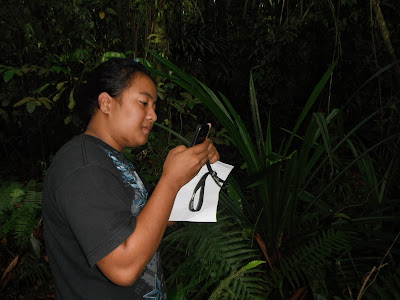 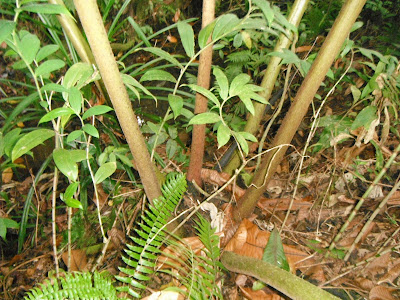 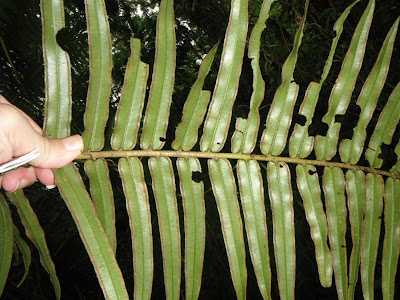 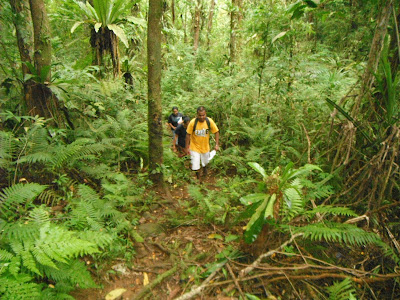 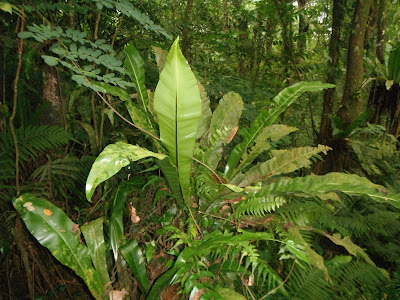 Asplenium nidus on the slope.