September 06, 2012
Twenty-five students in a health science section responded to three different instruments focused on physical activity readiness and stress. The twenty-five students have a median age of 18, a mean age of 19.68, with a sample standard deviation of 3.21. The youngest student is 17, the oldest is 32. The mode is 18 years old. Of the 25 students, 23 list the island of Pohnpei as their home state, two list the state of Yap as their home state. The section has 15 female students and 10 male students. 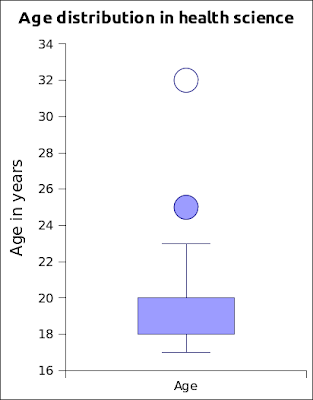 Twenty-five students responded to a Physical Activity Readiness Questionnaire form. A summary of the positive results is led off by chest pain.


Twenty-four of the students responded to a separate series of questions on stress given in class.

A highly modified version of the Holmes and Rahe stress scale was given as home work to the students. Twenty-one students completed the assignment. The time frame specified was life events during the past twelve months.
As possibly an example of extreme stress load that a student might carry, the one student who discovered that they are adopted also reported the death of a parent, breaking up with a boyfriend or girlfriend, becoming involved with alcohol and drugs, having a brother or sister leave home, a serious illness requiring hospitalization, and a change in sleeping and eating habits.

Looking over the three sets of data this author can see students who are clearly challenged by the events in their lives. While generalizations are always risky, students at the college tend to be quiet and reserved. Their apparently serene, smiling faces do not give away the turmoil some are experiencing inside. These islands are a place where emotion is generally repressed, and within a traditional family feelings are often best kept to oneself.

Learning at the college would benefit from an awareness that the students are facing a variety of stressors ranging from physical health issues to family and social stressors. Both student support services staff and faculty have important roles to play in providing social and institutional support, including positive encouragement, to the students.
education health