Monilophytes and Lycophytes in ethnobotany class

September 10, 2012
SC/SS 115 Ethnobotany began with a hike into the forest to observe and learn about lycopodium and ferns.

Lycopodiella cernua and the sun-loving fern Dicranopteris linearis. Lycopodium is a member of the division Lycophyta, the ferns are members of Monilophyta. After a fire three years ago, and over-harvesting due to decoration for graduation, the Lycopodiella was scarce. This term the Lycopodiella appears to have recovered and expanded along the ridgeline. 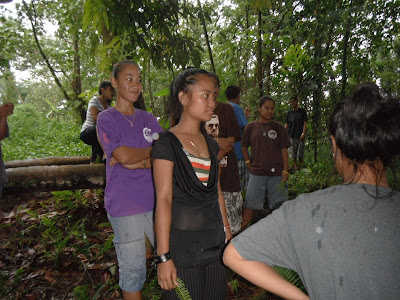 The class then paused at the top of the steep slope where Nephrolepisspp. and Thelypteris maemonensis were observed. A tree at the top of the trail now has a healthy growth of the lycopodium Huperzia phlegmaria on the trunk. Strobili have developed on this plant.

Local uses and meanings of these plants was also explained, along with names in the local languages. The local name for Microsorum scolopendria was covered. Its function as a mwarmwar for protecting a dancer from soumwahuen eni was not covered. A plant known locally as marekenleng was located on a tree, this plant is currently listed in the virtual herbarium as Asplenium polyodon.


This year I could not find  Davallia solida (ulung en kieil) atop the slope. I did find a small growth farther down slope. Asplenium nidus was encountered as we descended the slope.    Now that I no longer cover the use of Vittaria, (Haploteris elongata) the fern is re-establishing on the trees at the top of the slope. This omission has been necessary due to over harvesting of the plants. This term I mentioned only the Pohnpeian name and that the fern is a primitive fern. 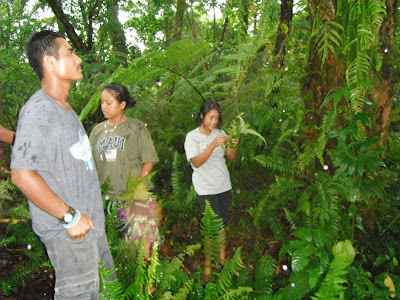 Down in the forest I could not locate Humata banksii. This term I also did not locate the Psilotum complanatum nor did I see Huperzia phlegmaria in the valley. The Asplenium Polyodon was still present both on top of the slope and in the valley. 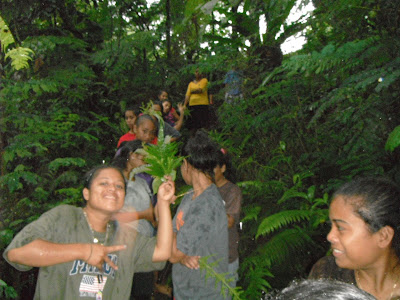 Father along the trail the class observed Cyathea nigricans. I then took the class down to the river and up to the Antrophyum callifolium. A Yapese student with a keen eye for plants noted the presence of an Angiopteris evecta just past the A. Callifolium.

The following week the students gave presentations on mosses, monilophytes, and lycophytes. Above is a poster presentation on the morphology of Nostoc, a cyanobacteria. 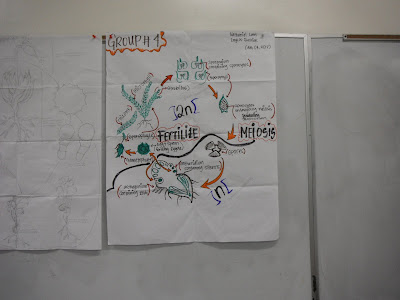 Group four produced an excellent diagram depicting the life cycle of lycopodium such as Lycopodiella cernua. 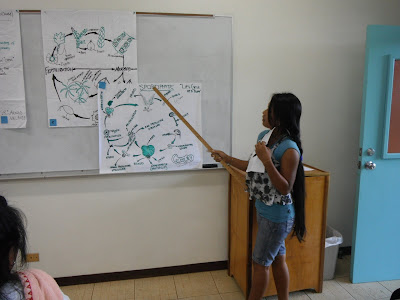 Rose Ann presents the life cycle of a fern. Click to enlarge the image. 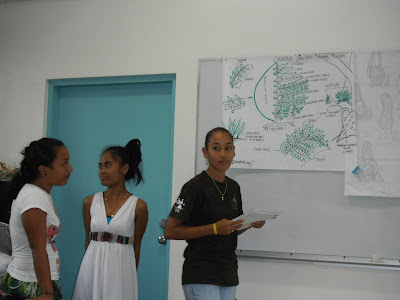 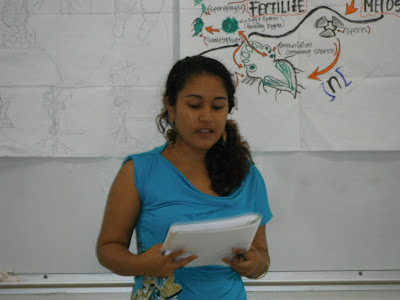 Delphina handled the proper pronounciation of the plant names in Kosraean. 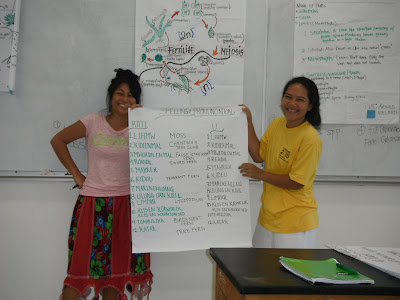 This term was the first term that the class visited the Pohnpei Traditional Plants garden minus the founder of the garden. The class was not the same without her, but the garden remains an ethnobotanical treasure. 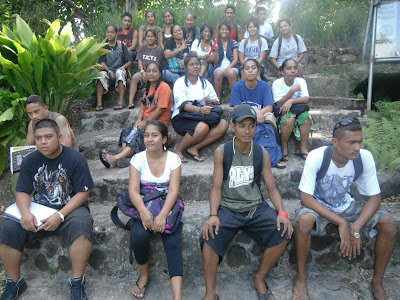