August 07, 2012
One year ago I resolved months of discomfort by going gluten free. At that time I felt odd, a singleton, with a strange inability to handle gluten. Morning doughnuts with my coffee, an island staple, were out. Along with bread, pasta, most breakfast cereals, and my occasional one beer with dinner to keep cholesterol at bay.

Then I learned that there were products which were specifically gluten free. I was suddenly a member of a market segment. A large enough group to support a segment of the food industry. I was clearly not alone. Still, runners's pride themselves on being healthy. And out here, in a nation that is ranked the number two nation for body mass index on the planet, being a runner causes people to think one must be unusually healthy. And able to eat anything. Surely the gluten free runner is a more unusual creature. And then the June 2012 Runner's World came in with an article titled Good-Bye Gluten? 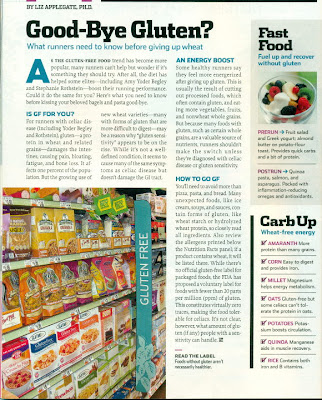 There are enough runners running gluten free that we merited an article. Gluten free runners are a market segment too. I no longer feel odd, just another part of a larger demographic. Runners who eschew wheat and other grains with gluten.

While gluten free products are rare out here, I am fortunate in that the local starch crops are all gluten free.
health running