The second program learning outcome which SC 130 Physical Science addresses is "3.2 Students will be able to present and interpret numeric information in graphic forms." The sixteen students in physical science this summer were given six questions which focused on this outcome as skills pre-assessment at the start of the term.

As reported in June, beyond a basic ability to plot data which was presented in an xy table, student abilities range from weak to almost no ability to complete the items correctly.

The following table indicates the number of students out of sixteen answering a given question correctly on the pre-test instrument and the number who answered the same item correctly as part of the final examination (post).


After a term focusing on mathematical models that underlie physical systems, student performance on the same material is strongly improved for all items.

Of all the items, writing out the results as a y = mx + b equation saw the smallest improvement from pre-test to post-test. 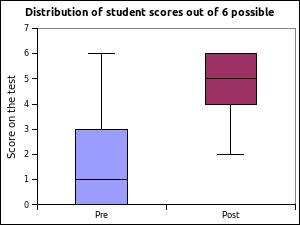