COM-FSM Chair Division of Mathematics and Natural Sciences Snyther Biza recapped the first meeting of the alignment group at which the group learned that the curricula differed between PICS and Madolehnihmw High School.

PICS then presented a mapping of their text books to MS 094 Technical math MS 096, MS 99, and MS 100 College Algebra. PICS has over 1000 students. The skill set of the students in any one class can vary considerably, class sizes tend to be large, and the PICS faculty tackle heavy loads due to be understaffed in relation to the number of students being served. 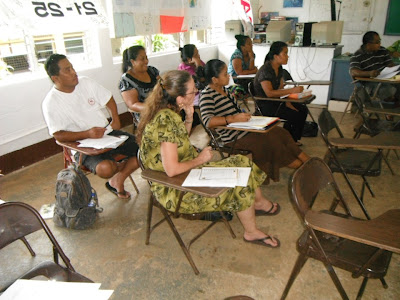 In general students at PICS take prealgebra their freshmen year, algebra I their sophomore year. At the end of the sophomore year the students pick a major - academic, business, vocational. The students are then placed into sections within that major by the counselors, possibly by considering their grade point average.

Senior year PICS runs 12 sections of mathematics, which represents full utilization of the faculty available to teach senior year mathematics. [As a result], only academic and business majors are served.

At PICS, only the academic majors take physics, a course which helps reinforce mathematics concepts. 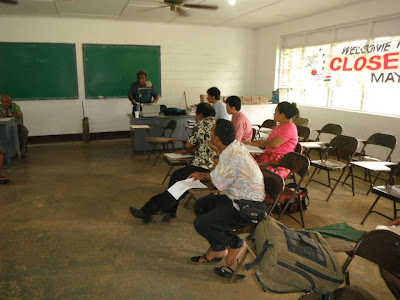 At present the push remains to deliver applied mathematics "in curriculum" as the mathematical need arises. Some of the texts in vocational, such as the automotive program, support this approach.

Dana asked if PICS and MHS could provide him with class lists for each section for last spring, then he could run an analysis of the COMET by section. This would have more meaning than overall averages given the differing mathematics backgrounds of the students within each high school major.

The college's director of academic programs noted that the IRPO office had some data that showed a stronger correlation between the sum on the mathematics COMET and college success in mathematics than with the placement scores by column. [In the 1990s mathematics placement was done based on the total score (the sum) on a Mathematics Association of America standardized test. In 2001 the placements derived from the total score were determined to be no better than random at predicting success in a mathematics course. That study is no longer extant, but that work led directly to the development current four column test structure in 2003]. 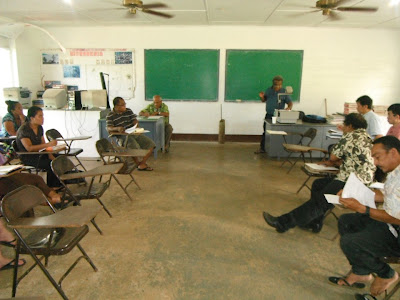 PICS noted that they began a similar schedule [four years ago] but ran into text book difficulties - specifically a lack of textbooks. In the wake of that effort, PICS opted to shift to teaching all freshmen prealgebra.

MHS teaches all freshmen algebra I, but this nascent effort is only a year old.

Apparently the mathematics standards were revised to reflect a mathematics sequence that would run from algebra to precalculus in the high schools in Pohnpei. Supporting these new standards will require content training and training of instructors on how to handle skill level diversity within their classrooms.

The next meeting will be 1:00 P.M. Friday 03 August 2012 at Madolehnihmw High School.
education mathematics Pohnpei