June 10, 2012
SC 130 Physical Science summer term 2012 I introduced the course on Monday 04 June. Tuesday 05 June was devoted to 011 Measurement and L00 metric measures. The sequencing on Tuesday reversed the order implied in the book, 011 preceded 010. Due to inclement weather, I brought sticks into class from the A101 hill. I did not include the "stones" material.

On Tuesday morning I did give a pre-assessment of graphing and slope calculation skills. The students performed weakly.

In light of the pre-assessment, I used the first part of Wednesday morning to cover graphing, coordinates, plotting, and the calculation of slope. I went over the pre-assessment. In the second part of the morning lecture I introduced density using metal cubes and an alphabet block. I calculated the density of each. I also used a beaker to calculate the density of water. Then I showed that objects with a density greater than that of water sank, while objects with a density less than the density of water float. 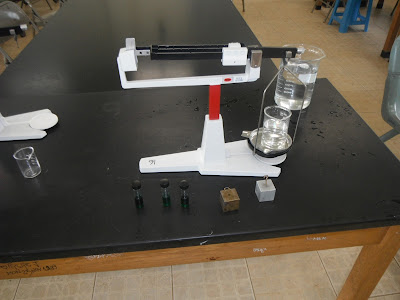 I followed this with the three vial demonstration. 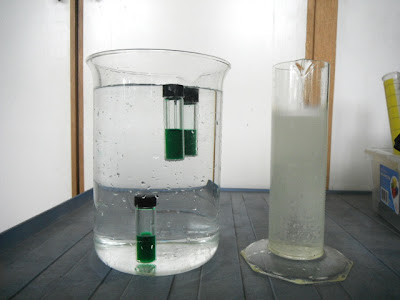 Two vials float, one sinks, although the amount of liquid in each is identical. 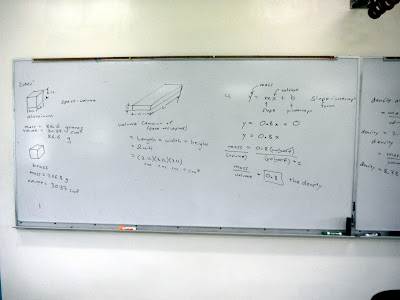 Above are the notes from the board for this Wednesday morning density lecture. 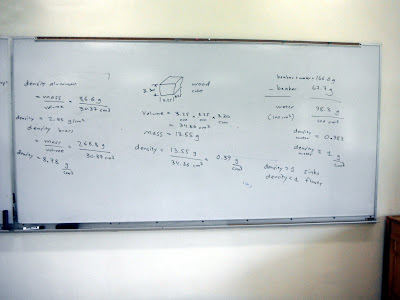 More notes from the lecture, with a calculation on the right side that the density of water is 0.983 g/cubic centimeter. This provided a very smooth and logical segue into the afternoon laboratory on soap density. The afternoon laboratory was far less mysterious to the students and became an extension that combined the morning presentation on slope as physical quantities and the density equations.

I would like to do this sequence again during the fall term. Fitting this much material into the regular term prior to laboratory one will be a challenge. Monday would have to be course and measurement intro plus the pre-assessment? Wednesday could cover slope and density. 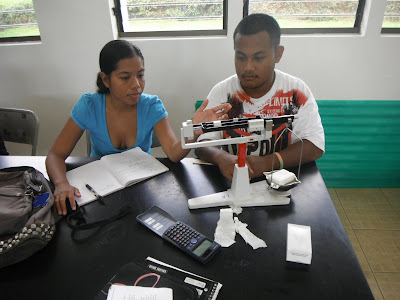 Laurie and Tommy mass their soap 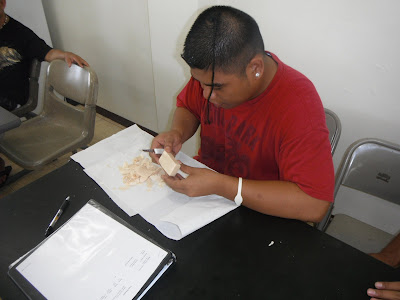 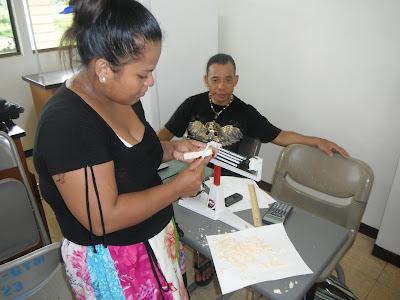 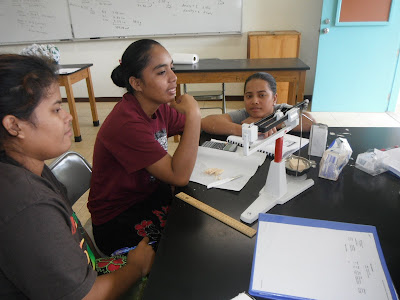 Ketruth and Jackie mass a slab of soap 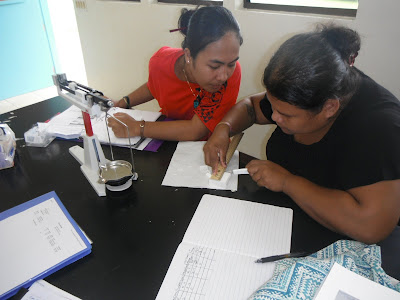 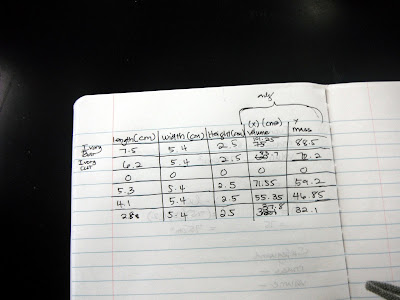 Patty-Ann's data in a notebook 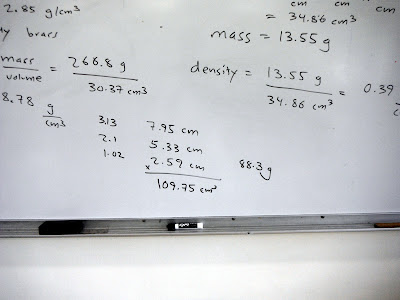 At the bottom are precise measurements for a whole bar of Ivory, 7.95 cm by 5.33 cm by 2.59 cm for a volume of 109.75 cubic cm using calipers that report to the nearest 1/100th of an inch. The calipers are not metric, I run the conversion for the students. 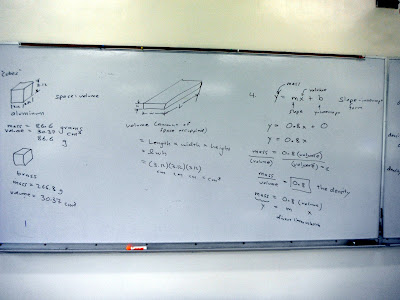 The right side of the board now contains slope data. 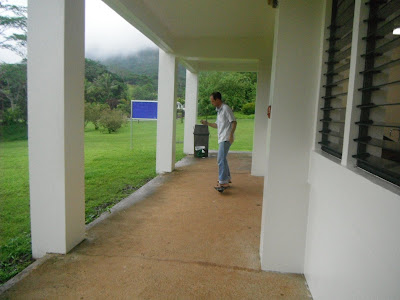 The next day I introduce linear motion using a RipStik 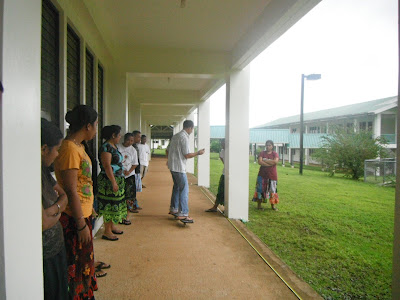 Note that I have the undivided attention of the students. At the end of the period I mention this to the students. I like to make transparent to the teacher education majors what I am doing methodologically. The RipStik is a way to attract their attention, or any student's attention. 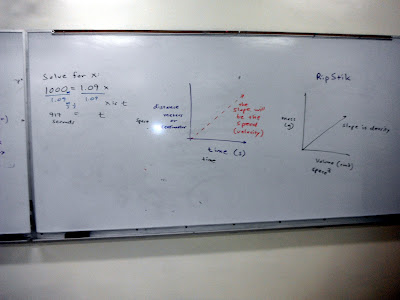 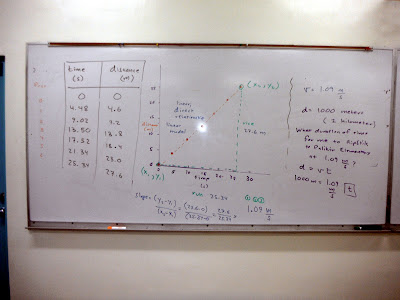 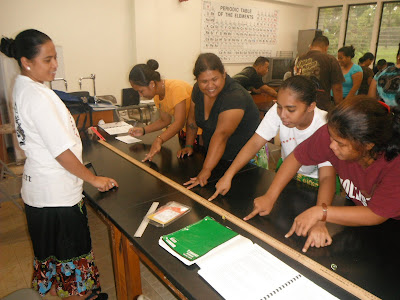 Due to heavy rain, the rolling "ball" laboratory was done inside using marbles and fingers. Patyy-Ann, Jackie, and Ketruth mark where the marble was. The marble can be seen just past Ketruth. I was unable to obtain from this group why Jackie's second mark is beyond Ketruth's marks. The group would later have data that was not consistent with forward linear motion. 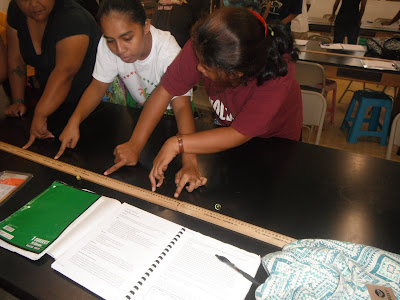 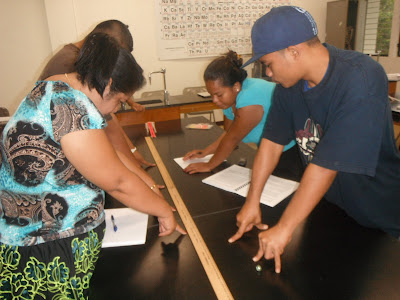 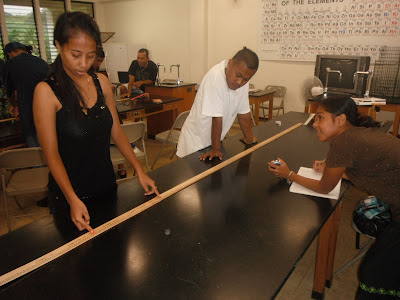 Beverlyn marks locations for the marble while Laurie reads off the seconds from a stopwatch.